In this paper, the authors introduce an upper bound of the longitudinal elastic modulus of unidirectional fibrous composites to strength of materials approach, provided that the fibre is much stiffer than the matrix. In the mathematical derivations resulting in this bound, the concept of boundary interphase between filler and matrix was also taken into consideration. The novel element of this work is that the authors have not taken into account any particular variation law to approach the stiffness of this intermediate phase. The theoretical predictions were compared with those obtained from some accurate analytical models as well as with experimental data found in the literature, and a satisfactory accordance was observed.
Keywords: fibrous composites; longitudinal modulus; upper bound; strength of materials; interphase fibrous composites; longitudinal modulus; upper bound; strength of materials; interphase

2. Towards the Determination of an Upper Bound for Longitudinal Modulus of the Composite

In Table 1 the theoretical predictions concerning the upper bound of the composite longitudinal modulus, as obtained from Equation (21) in combination with Equation (20) appear with respect to fibre concentration by volume which is up to 0.65. Roughly speaking, one may state that this value generally constitutes the optimum fibre volume fraction above which the reinforcing action of the fibres is upset [22]. For facility reasons, and to be in accordance with the experimental work of Clements and Moore [12], we considered an epoxy composite reinforced with E-glass fibers, i.e., Ef = 72 GN/m2, and Em = 3.5 GN/m2 whereas the Poisson’s ratios of fibre and matrix are νf = 0.2 and νm = 0.35, respectively. In the same table, the theoretical values obtained from Theocaris et al. [11], according to linear, hyperbolic, and parabolic variation laws also occur. Besides, the theoretical values yielded by two and three term unfolding models derived from Theocaris [14] are presented. Finally, the theoretical values achieved by the expression for apparent Young’s modulus in the direction of fibres obtained from Sideridis et al. [15], according to three variation laws are exhibited.
For a brief description of these rigorous theoretical formulae used for comparison, let us refer to Appendix A Section. On the other hand, the experimental values obtained from Clements and Moore [12] and Sideridis [13] are performed as well. Here, one may observe that amongst the variation laws that were adopted by Theocaris et al. and Sideridis et al. to approach the interphase stiffness in the formulae presented in past papers [11,15], the linear ones yield the highest predictions.
Next, Figure 3 designates the theoretical values for the upper bound of the composite longitudinal modulus, yielded by Equation (21) associated with Equation (20) versus fibre volume fraction, together with those obtained from Theocaris et al. (linear, parabolic and hyperbolic variation law) [11] and Sideridis et al. (linear, parabolic and hyperbolic variation law) [15]. Moreover, the theoretical predictions arising from Theocaris’ two and three term unfolding model [14] are performed. For a brief description of these theoretical formulae, let us refer to Appendix A Section. Finally, the experimental data obtained from Clements and Moore [12] and Sideridis [13] appear.
By focusing in Figure 2, one may observe that for low fibre contents the theoretical values of EL arising from Equation (21) by the aid of (20) are very close to those yielded by all the other theoretical formulae used for comparison. In addition, they are in good agreement with the experimental values obtained from Sideridis [13]. Next, for medium fibre concentrations by volume one may point out a deviation, especially between the values obtained from Equation (21), as well as from Sideridis’ upper bound [15] with the predictions given by Theocaris’ two and three term unfolding model. Yet, a comparison between the values obtained from Equation (21) and those arising from Theocaris et al. [11] yields a smaller deviation.
However, an increment of this discrepancy is noticed at high fibre contents up to 0.65. Besides, the theoretical predictions of Equation (21) are above the experimental data obtained from Sideridis [13] and well above those of Clements and Moore [12]. Of course one may elucidate that such discrepancies could be generally expected given that the aim of Equation (21) and Sideridis formula [15], is to signify an upper bound of the longitudinal modulus. Moreover, some discrepancies are also attributed to the fact that some theoretical assumptions and conceptions cannot be fulfilled in praxis.
In the meanwhile, one may also observe that for high fibre concentrations by volume the theoretical values yielded by Theocaris’ two and three term unfolding model [14] are in consensus with the experimental results obtained from Clements and Moore [12]. Finally, it can be said that Equation (21) constitutes a slight but concrete improvement when compared with Sideridis’ upper bound performed previously [15].
Nevertheless, a shortcoming of Equation (21), which illustrates the upper bound of longitudinal composite moludus derived from strength of materials approach, is that the mathematical derivations were based on the hypothesis that the fibre is much stiffer that the matrix i.e., and hence an analogous expression for Poisson ratio of the composite cannot be obtained according to this reasoning. Thus the overall methodology leading to an upper bound of composite modulus without the consideration of any variation law, cannot be used to improve a theoretical formula arising from elasticity approach, such as the other formulae used from comparison without the adoption of several variation laws to approach interphase Poisson’s ratio. Thus, one could not know beforehand which variation law of interphase Poisson ratio would yield the highest predictions of EL in the final expression of longitudinal modulus, although it was observed [25] that the parabolic variation law generally yields the lowest values for the interphase stiffness of unidirectional fibrous composites when compared with other laws that are commonly used. On the other hand, one may also pinpoint that since according to strength of materials approach fibres, matrix and interphase are supposed somewhat as solid blocks the volumes of which are proportional to their relative abundance in the overall material instead of the modified form of Hashin–Rosen cylinder assemblage model presented in Figure 1 one may adopt the following simplified model (see Figure 4) to simulate the microstructure of the unidirectional fibrous composite.
Evidently the following expressions hold with .
Obviously, since the inequality holds, the overall mathematical procedure resulting in Equation (19) and in Equation (21) remains as is.
In this context, the three-phase modified version of Hashin–Rosen model exhibited in Figure 1 could be omitted, given that the radius of this coaxial cylinder model does not take place in the mathematical derivations carried out by the author’s to arrive at the upper bound of composite modulus. Hence, the overall mathematical derivation leading to this bound may alternatively result from the consideration of a simplified rectangular model and possibly seems closer to the basis of a three-phase “solid blocks” unit cell than a coaxial cylinder model. However, it is the authors’ opinion that the adoption of the model presented in Figure 1 is very useful, since the radii of the three embedded cylinders signify in a more elegant and comprehensive manner the way that the interphase region surrounds the unidirectional fibre in the form of numerous successive annuli [24].

In this theoretical work, constituting a continuation of the author’s on-going investigation into elastic properties of fibrous materials, an upper bound of longitudinal modulus of three phase fibrous-reinforced composites was a determined according to strength of materials approach, with respect to the constituent material properties, provided that the fibre is much stiffer than the matrix. This hypothesis generally concerns polymeric fibrous composites. The fibres that reinforce the polymer, which is supposed to be macroscopically homogeneous are unidirectional, continuous and isotropic. Concurrently, the concept of interphase in the context of a cluster of three coaxial cylinders was taken into account. In this framework, a rephrased form of Hashin–Rosen cylinder assemblage model was adopted. The novel element here is that the authors did not suppose any particular variation law to approach the interphase stiffness.
In this context, one may deduce that the following three basic intermediate steps referring to the process of estimating the stiffness of the overall material were bypassed:
In closing, it can be said that the proposed formula contributes in a considerable manner to the encapsulation of several analytical techniques for evaluating the stiffness of three-phase unidirectional fibrous composites.

The authors declare that there is no conflict of interests regarding the publication of this paper.

In this section, let us make the following brief theoretical remarks referring to some reliable theoretical formulae resulting in the direct estimation of longitudinal modulus for a general class of unidirectional fibrous composites reinforced with continuous fibres.
(1) Theocaris, Sideridis, and Papanicolaou formula [11]
Here, the adopted microstructural model to simulate the periodic fibrous composite is a coaxial three layer cylindrical model similar to that presented in Figure 1. The longitudinal modulus , was calculated in the framework of energy balance for the overall material. In this context, the following relationship holds
In the above representation, both interphase modulus and Poison’s ratio are functions of the polar distance from the fibre according to a three phase coaxial cylinder model. To integrate the second term, four different laws of variation were taken into account.
Hence the following expressions hold:
(a) Linear Law for Interphase Stiffness and Poisson’s Ratio
Also according to Lipatov’s experimental method [6] the following equality holds thus it follows
(b) Hyperbolic law for interphase stiffness and Poisson’s ratio
Then, by the aid of Equation (A3) it implies that
(c) Two degree parabolic law for interphase stiffness and Poisson’s ratio and by the aid of Equation (A3) it implies that
(2) Theocaris’ Two-Term Unfolding Model for Fibrous Composites [14] where the coefficient , was experimentally determined previously [14], additionally, the real quantity B depends on the fibre volume fraction and the coefficient λ and signifies the implicit role of the mesophase annulus in this formula.
(3) Theocaris’ Three-Term Unfolding Model for Fibrous Composites [14]
Again, the quantities and B are determined in the same way as in Two-Term Unfolding Model.
(4) Sideridis-Papadopoulos-Kyriazi formula [15]
According to a classical elasticity approach, an upper bound for longitudinal modulus of unidirectional fibrous composites reinforced with long fibres is given in a rigorous manner by the following explicit expression with
Again, the Poisson’s ratio of interphase zone named can be evaluated for linear, hyperbolic and parabolic variation respectively. 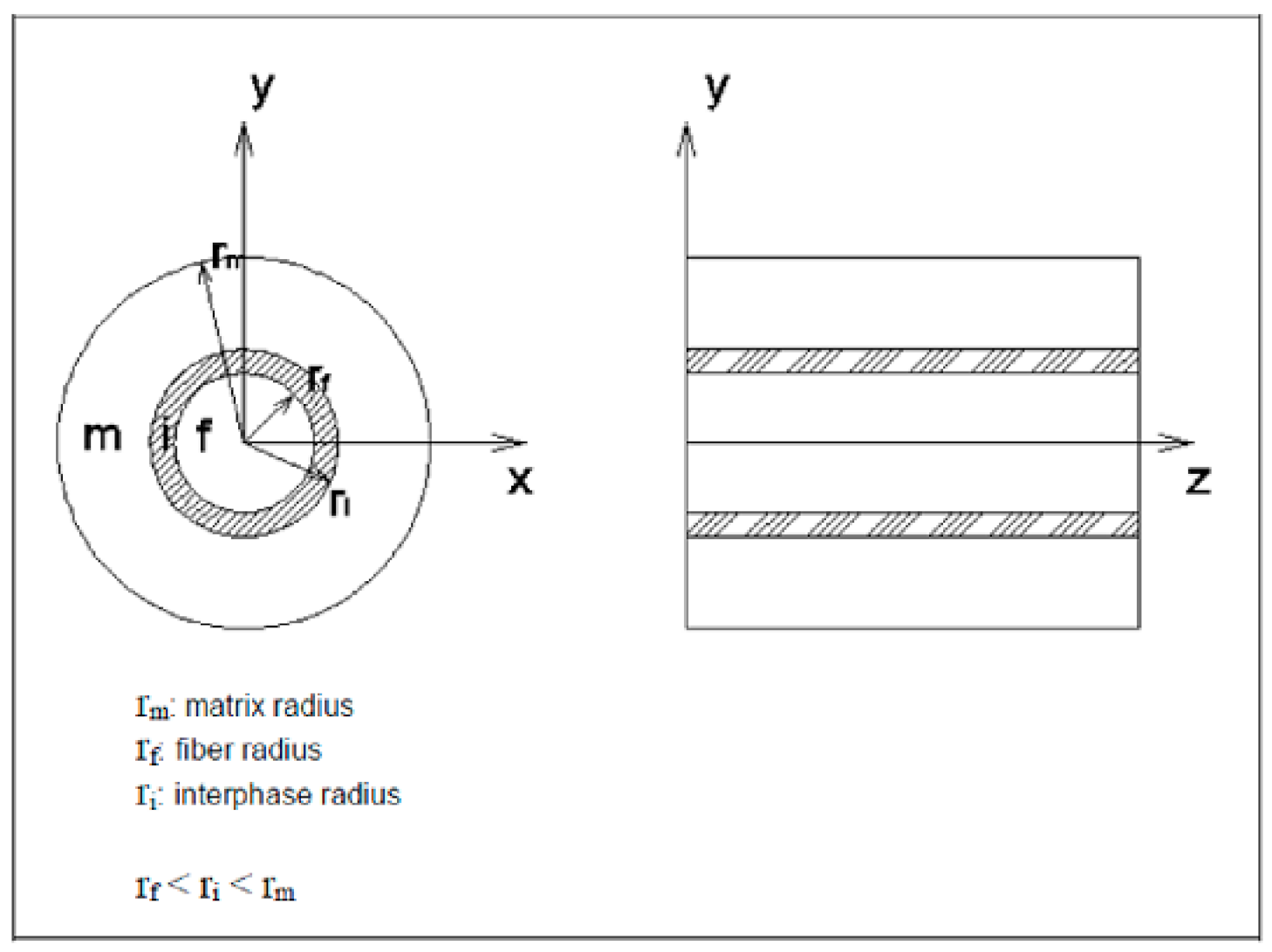 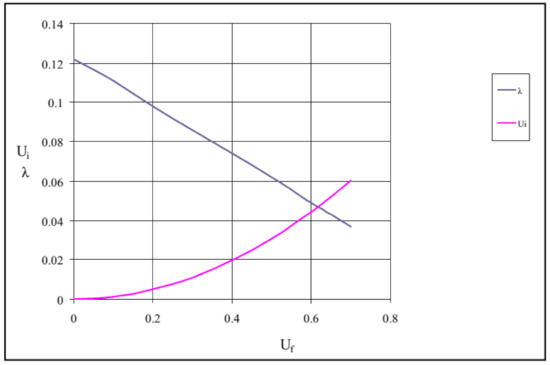 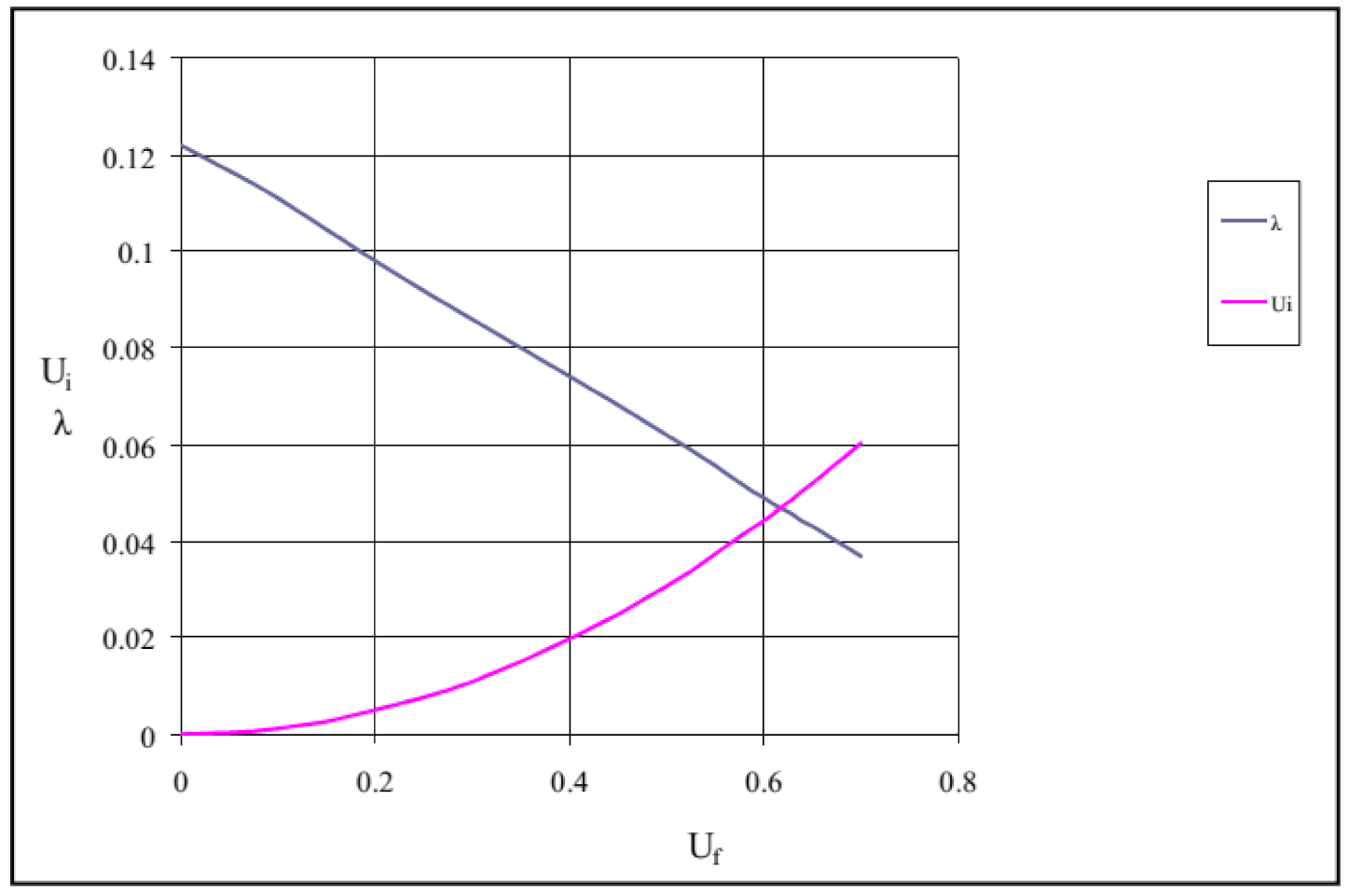 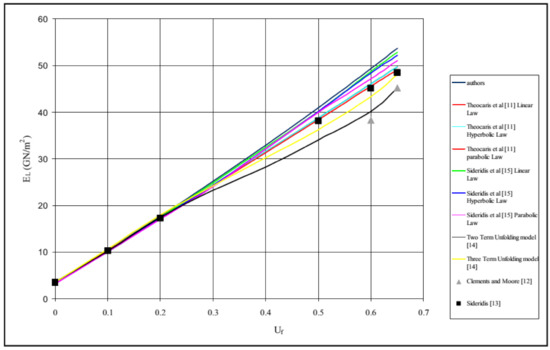 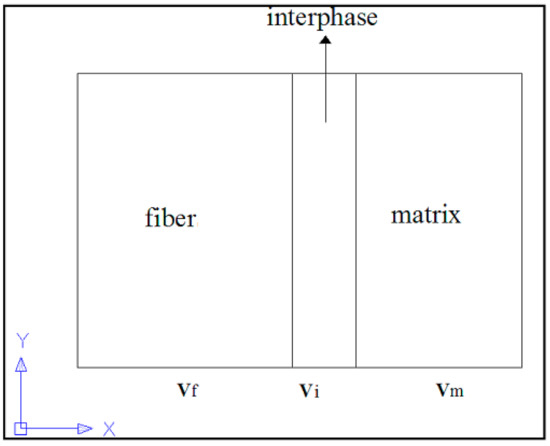