Carbon fiber-reinforced plastics (CFRP) have seen a significant increase in use over the years thanks to their specific properties. Despite continuous improvements in the production methods of laminated parts, a trimming operation is still necessary to achieve the functional dimensions required by engineering specifications. Laminates made of carbon fibers are very abrasive and cause rapid tool wear, and require high cutting temperatures. This creates damage to the epoxy matrix, whose glass-transition temperature is often recognized to be about 180 °C. This study aims to highlight the influence of the cutting temperature generated by tool wear on the surface finish and mechanical properties obtained from tensile tests. Trimming operations were performed on a quasi-isotropic 24-ply carbon/epoxy laminate, of 3.6 mm thickness, with a 6 flutes diamond-coated (CVD) cutter. The test specimens of 6 mm and 12 mm wide were obtained by trimming. The reduced width of the coupons allowed amplification of the effect of defects on the measured properties by increasing the proportion of coupon cross-section occupied by the defects. A new tool and a tool in an advanced state of wear were used to generate different cutting temperatures. Results showed a cutting temperature of 300 °C for the new tool and 475 °C for the worn tool. The analysis revealed that the specimens machined with the new tool have no thermal damage and the cut is clean. The plies oriented at −45° presented the worst surface finish according to the failure mode of the fiber. For the worn tool, the surface was degraded and the matrix was carbonized. After cutting, observations showed a degraded resin spread on the machined surface, which reduced the surface roughness and hid the cutting defects. In support of these observations, the tensile tests showed no variation of the mechanical properties for the 12 mm-wide specimens, but did show a 10% loss in mechanical properties for the 6 mm-wide specimens. These results suggest that the thermal defects caused by tool wear affect tensile properties, but only from a certain coupon width below which the machining defects increase their influence on the properties. View Full-Text
Keywords: carbon fiber-reinforced plastics (CFRP); trimming; machining; cutting temperature; tensile strength; surface roughness; tool wear carbon fiber-reinforced plastics (CFRP); trimming; machining; cutting temperature; tensile strength; surface roughness; tool wear
►▼ Show Figures 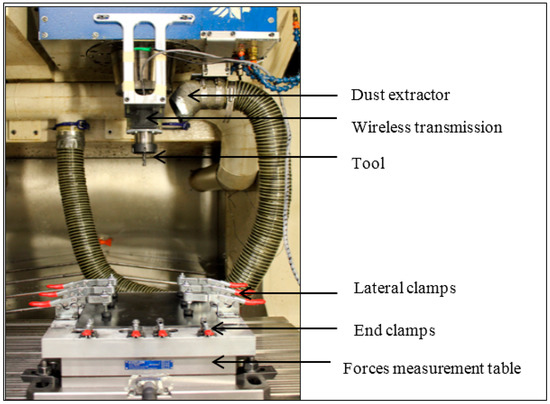