This paper presents the behavior of hollow-core fiber-reinforced polymer–concrete–steel (HC-FCS) columns under cyclic torsional loading combined with constant axial load. The HC-FCS consists of an outer fiber-reinforced polymer (FRP) tube and an inner steel tube, with a concrete shell sandwiched between the two tubes. The FRP tube was stopped at the surface of the footing, and provided confinement to the concrete shell from the outer direction. The steel tube was embedded into the footing to a length of 1.8 times the diameter of the steel tube. The longitudinal and transversal reinforcements of the column were provided by the steel tube only. A large-scale HC-FCS column with a diameter of 24 in. (610 mm) and applied load height of 96 in. (2438 mm) with an aspect ratio of four was investigated during this study. The study revealed that the torsional behavior of the HC-FCS column mainly depended on the stiffness of the steel tube and the interactions among the column components (concrete shell, steel tube, and FRP tube). A brief comparison of torsional behavior was made between the conventional reinforced concrete columns and the HC-FCS column. The comparison illustrated that both column types showed high initial stiffness under torsional loading. However, the HC-FCS column maintained the torsion strength until a high twist angle, while the conventional reinforced concrete column did not. View Full-Text
Keywords: hollow-core column; composite column; fiber-reinforced polymer (FRP); torsional loading hollow-core column; composite column; fiber-reinforced polymer (FRP); torsional loading
►▼ Show Figures 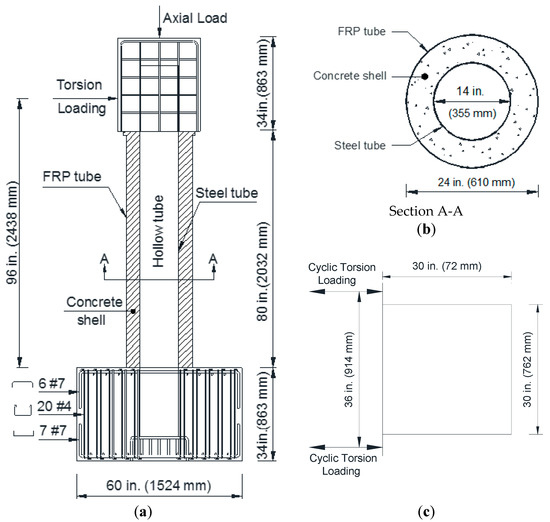