Strengthening of Masonry Columns with BFRCM or with Steel Wires: An Experimental Study
Previous Article in Journal

Swept sources have been widely used in various interferometric sensing and imaging applications, such as optical frequency domain reflectometry (OFDR) sensors [1] and swept-source optical coherence tomography (SS-OCT) images [2,3,4]. The OFDR sensor has been used to detect the backscatter signal along a long length of optical fiber core as a laser beam from swept source is converted to an interferometric sensing signal as a function of wavelength [1]. The SS-OCT is also based on the OFDR interferometric backscattering signal sensor, but a two-dimensional (2-D) or three-dimensional (3-D) tomography image can be constructed with a beam scanning method over the target space [2,4]. Since the characteristics of a swept source affect the systems performance, it is necessary to improve the swept source’s lasing performances including sweeping bandwidth, line width, repetition speed, etc. The improved linearity of output wavenumber (k) versus sweeping time is an especially important parameter because the optical interference fringe on the linearized wavenumber (k) scale is essential for the domain conversion process with fast Fourier transformation (FFT) in OFDR sensors and SS-OCT imaging applications [5,6,7,8].
Typically, most swept sources are related to mechanical tuning filter of the output wavelength selection, such as a fiber Fabry–Perot tunable filter (FFP-TF) [9,10], a polygon mirror scanner [11], and a tunable micro electro mechanical system (MEMS) filter [12]. Furthermore, it is known that the change in this output wavelength versus time is linearly proportional to the wavelength-scale (λ), not the wavenumber-scale (k). At a slow repetition speed, these mechanical tuning filters can easily operate with an arbitrary drive function or programmed wavenumber-linearized function. However, at a high swept rate, these filters work with a sinusoidal drive function only at the resonance frequency of the mechanical tuning filter, which is affected by a distorted response on the linearized wavelength scale. When the sweeping time does not correspond to the wavenumber-scale, an additional process of resampling and recalibration is required for linearization from the wavelength to the wavenumber scale after the detection of an optical interference fringe over time [5,6,7,8,9,10].
To overcome the mechanical limitation of filters, we suggest a novel filter-less electro-optic swept source based on the active mode locking (AML) method [13,14,15]. However, the proposed AML swept source is limited by the wavelength-linear sweep versus time: The change in the output versus time is not linearly proportional to the wavenumber scale [15]. Regarding the electro-optic drive, high-speed wavenumber-linear sweeping can be successfully implemented by applying a programmed wavenumber-linear drive function that is a 4th-order polynomial equation with time. However, it is still inconvenient to use an arbitrary function generator (AFG) with the difficult-to-obtain drive function in a one-to-one comparison process of the wavenumber value and the offset voltage of the AFG [15].
In this work, we implemented a linearly wavenumber-swept uni-directional fiber-ring laser based on an acousto-optic tunable filter (AOTF) for interferometric sensing and imaging applications. It has been known that the filtered AOTF has the physically linearized relation between the optical frequency and acoustic frequency [16,17]. It means that only a simple triangular drive function is needed to ensure a linearly sweeping wavenumber in the time domain, instead of a specially programmed drive function with respect to time [18,19,20,21,22]. Moreover, the AOTF filter exhibits more attractive characteristics of accurate wavelength selection, high stability, and non-mechanical actuation [19,20]. We also demonstrate that the electro-optic operation of a swept source is useful to apply any types of drive function and to improve environmental stability, compared with FFP-TF. The acquired 2D-OCT images are compared in parallel by applying both sinusoidal and wavenumber-linear drive functions.

The wavenumber-linearity operation is an intrinsic characteristic of an AOTF because the transmitted wavelength of the filter is inversely proportional to the applied radio frequency (RF) frequency of acoustic wave. As the RF is applied to a tellurium dioxide (TeO2) crystal by the bonded transducer, the acoustic waves pass through the crystal to produce periodic optical lattices like a Bragg diffraction. When light propagates in the crystal, it is diffracted by the travelling acoustic wave. A specific wavelength of light is selected by changing the applied RF, which is expressed as follows: where Δn is the birefringence of the TeO2 crystal, α is a complex parameter depending on the design of AOTF, Va is the speed of ultrasound wave, and fa is the applied RF.
Figure 1 shows the experimental setup for the electro-optic swept source and SS-OCT interferometric imaging system. The swept source consists of a fiber-coupled semiconductor optical amplifier (SOA) as a gain medium, two isolators for a uni-directional propagation, an AOTF for selecting the lasing wavelength, a polarization controller (PC), and a 50:50 output coupler. The uni-directional ring configuration can support the improved stability and easy alignment in the laser cavity [16,17].
The SS-OCT imaging system is based on a fiber-type Michelson interferometer comprised of a broadband 50:50 coupler, a circulator, and a pair of reference mirror path and sample path. Objective lenses with 3× magnification and a 54 mm focal length were used to optimally gather sample images. A translation stage was used for a lateral scanning of the sample. A fiber Bragg grating (FBG) with a 1-nm bandwidth and an 840-nm center reflection is used to acquire a periodic trigger signal for the optical coherence tomography (OCT) imaging process. Since the center reflection wavelength of 840 nm is located within the bandwidth of the electro-optic swept source from 836.32 to 870.80 nm, one optical pulse clock for each A-scan can be periodically received at the photo detector (PD) through a 90/10 coupler and circulator. The reflecting intensities of the optical interference fringe were converted on a gray scale image along the transverse and axial distances. For the series of images, 1024 depth points were acquired to compose an image of 512 (axial) pixels × 256 (transverse) pixels.

We propose and experimentally demonstrate an electro-optic swept source based on an AOTF. Since the electro-optic swept source does not include mechanical movement, the environmental stability and arbitrary wavelength tunability of the laser output is improved. The high wavenumber linearity (R-square value of 0.99991) is represented with a simple triangular drive function to obtain an improved quality OCT image compared to the sinusoidal drive function. It is expected that the electro-optic tenability of the swept source with the AOTF will be usefully applied to the various wavenumber-linear interferometric sensing and imaging systems including OFDR and SS-OCT.

This research was supported by the Bio & Medical Technology Development Program of the NRF funded by the Korean government, MSIP (2015M3A9E2067143). 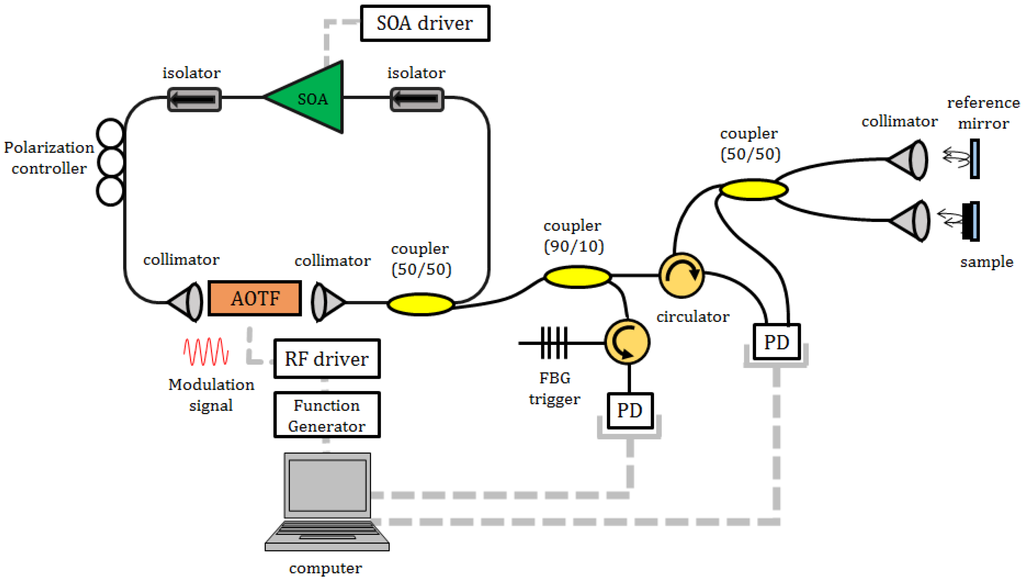 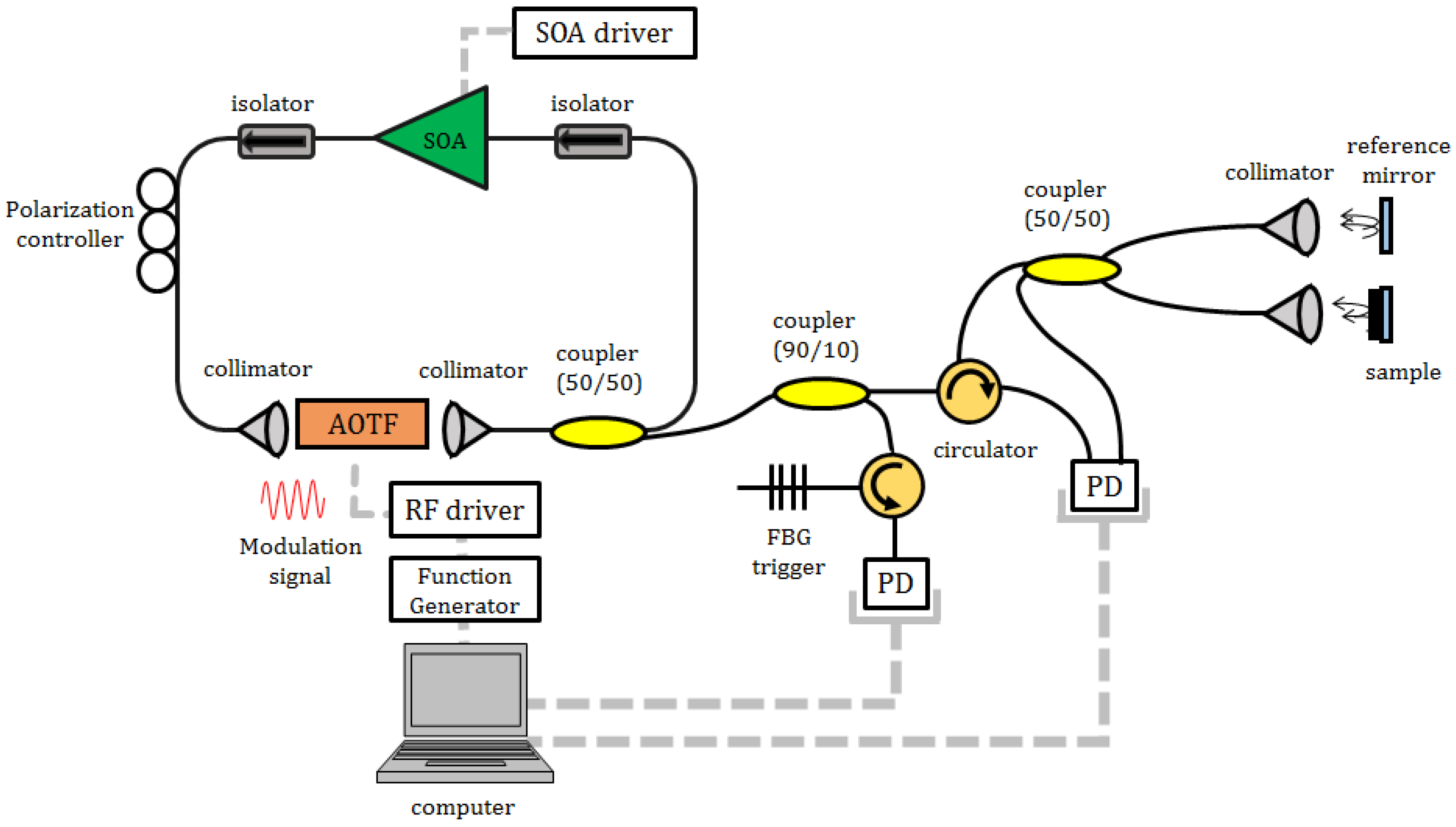