A highly dirt-resistant paint for building façades without chemicals harmful to nature and the environment would resolve the unattractive disfigurement of building walls caused by dirt. The current ranking of Pakistan in terms of air pollution is 139th. A set of dirt-resistant paint formulae was constructed with the aid of computer programming. From this set, the best dirt-resistant paint formula was explored and identified. The final determination of the optimum formulation was based on statistically planned experiments conducted in the laboratory and in a natural environment. In order to achieve high-quality results, the best available laboratory equipment were used. The results obtained were analyzed and conclusions were drawn using appropriate statistical techniques. The procedure started with the selection of appropriate raw materials and generation of a target population of 543,143 paint formulations by adopting Basic Language computer programming. The average pigment volume concentration (PVC) percentage was computed using theory and found to be 54.98% for the target population paint formulations, verifying the literature results. Experimentation and statistical analysis were performed to compare the classical conventional agitator with the latest lab equipment such as a nano mill, and it was concluded that the nano mill performs better on average than the conventional agitator in the preparation of paint formulations. Hence, the sample of paint formulations was prepared on a nano mill and tested in the laboratory using advanced available technology for the analysis and comparison of paint properties to determine the best paint formulation. The results were analyzed using the Analysis of Variance (ANOVA) technique, and it was concluded that the newly developed paint has the highest dirt resistance on average. The final selected formula, No. 50 (the newly developed paint), was compared with the three best conventional paints available in the Pakistan market in a natural environment for a period of almost one year. A regression model was also constructed to study the effect of environmental factors like time, temperature, and humidity on the dirt resistance of paints. It was found that the newly developed paint formulation is the most environmentally friendly. It performs equally well as one conventional paint and has higher dirt resistance than two other conventional paint formulations containing harmful chemicals. The regression model of dirt resistance involving variables including time, temperature, and humidity shows that these factors significantly affect the dirt resistance of a given paint at a 5% level of significance. For a given paint, 95.34% of the variation in the dirt resistance is due to and explained by the given factors. The regression model is useful for predicting the average dirt resistance of a given paint with a certain level of confidence. The project exemplifies the work of applied research from conceptualization to successful commercialization in the paint industry. View Full-Text
Keywords: agitator; dirt; humidity; nano mill; temperature; time agitator; dirt; humidity; nano mill; temperature; time
►▼ Show Figures 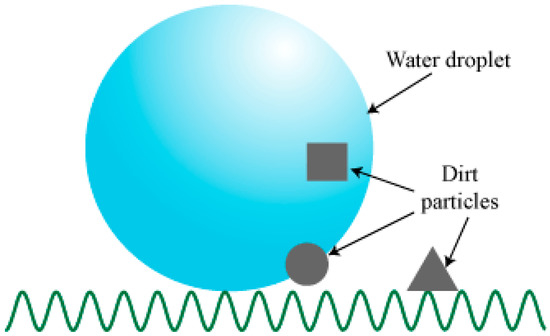