Deposited Au films and coatings are, nowadays, routinely used as active or passive elements in several innovative electronic, optoelectronic, sensing, and energy devices. In these devices, the physical properties of the Au films are strongly determined by the films nanoscale structure. In addition, in these devices, often, a layer of Ti is employed to promote adhesion and, so, influencing the nanoscale structure of the deposited Au film. In this work, we present experimental analysis on the nanoscale cross-section and surface morphology of Au films deposited on Ti. In particular, we sputter-deposited thick (>100 nm thickness) Au films on Ti foils and we used Scanning Electron Microscopy to analyze the films cross-sectional and surface morphology as a function of the Au film thickness and deposition angle. In addition, we analyzed the Au films surface morphology by Atomic Force Microscopy which allowed quantifying the films surface roughness versus the film thickness and deposition angle. The results establish a relation between the Au films cross-sectional and surface morphologies and surface roughness to the film thickness and deposition angle. These results allow setting a general working framework to obtain Au films on Ti with specific morphological and topographic properties for desired applications in which the Ti adhesion layer is needed for Au. View Full-Text
Keywords: Au; Ti; sputtering; morphology; roughness Au; Ti; sputtering; morphology; roughness
►▼ Show Figures 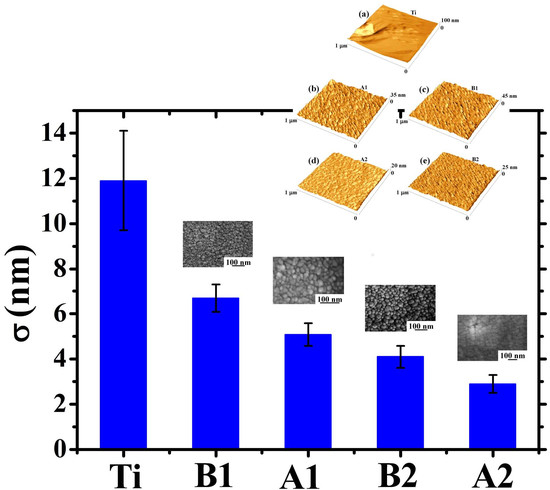