The process of using fungal-colored wood (spalted wood) for marquetry and intarsia woodworks in Italy and Germany was very popular from the 1400–1600s, with some instances continuing as late as the 1800s. While spalted marquetry in these countries is relatively well documented, less is known about its use in other parts of Europe. One of the primary reasons for this lack of knowledge is the difficulty in identifying spalted wood, especially the blue-green variety produced from Chlorociboria species, from wood dyed with copper-based compounds or other synthetics. The most reliable testing method involves destructive sampling, where a small piece is taken from the work, the pigment extracted, and an analysis performed. Such sampling is simply not feasible, nor often allowed, on ancient artwork. To make a reliable, non-destructive identification of spalted wood, a visual method based on anatomical characteristics of spalted wood was developed to differentiate spalted wood from dyed wood. High-resolution pictures were taken from wooden artifacts containing blue-green colored wood in collections at the National Museum of Decorative Arts (MNAD), the Royal Site Monastery El Escorial and the Bilbao Museum of Fine Arts in Spain. The concentration of pigment in the rays, the color distribution, the size of the piece and the date of production, were analyzed. With the use of this new visual method, it was possible to determine that intarsia artifacts, held in Spain but of Augsburg origin from the 1500–1600s, contained spalted wood details. Meanwhile, Spanish and Italian intarsia artifacts from the 1800s were found to only contain dyed wood. View Full-Text
Keywords: spalted wood; Chlorociboria; intarsia; marquetry; xylindein spalted wood; Chlorociboria; intarsia; marquetry; xylindein
►▼ Show Figures 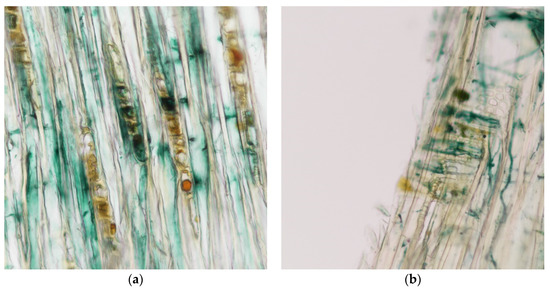