Amorphous thin films of La–Cu–O deposited by magnetron sputtering have been annealed at different temperatures and in situ analyzed by X-ray diffraction. These experiments were useful to determine the crystallization temperature and to follow the crystallization process of the film. The in situ annealing X-ray diffraction analyses have been also used to determine the thermal expansion coefficient of La2CuO4 thin film. The estimated value is close to that obtained for a commercial powder. The thermal expansion coefficient value with additional environmental scanning electron microscopy observations explains the delamination origin that occurs during the annealing before the crystallization step. The buckling and delamination of the film observed is caused by the thermal expansion coefficient mismatch of the film and the substrate. During the heating step, the mismatch generates compressive stress at the film/substrate interface, causing the film to lift off and crack in the typical way. View Full-Text
Keywords: crystallization; thin films; La2CuO4; thermo-mechanical properties crystallization; thin films; La2CuO4; thermo-mechanical properties
►▼ Show Figures 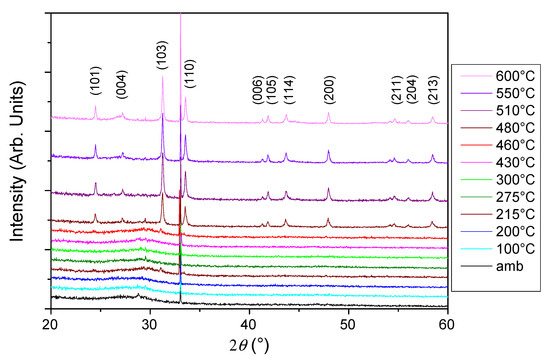