A customized particle image velocimetry/planar laser induced fluorescence (PIV/PLIF) experimental method, aiming to capture transient hydrodynamics of solitary waves of inertia-dominated falling liquid films, is presented in this paper. A novel PIV/PLIF technique, which only uses one camera to capture simultaneously both particle image and fluorescence, and meanwhile a post-processing imaging method is also developed, which is able to simultaneously measure both internal velocity field in film and its topology. To validate the fidelity of the novel PIV/PLIF technique, a comparison between experimental results of streamwise velocity profile and film thickness and that of the Nusselt’s prediction at low Reynold number is carried out, and in addition, integral continuity is checked for transient wavy film, both of which shows that they are in good agreement. Based on experimental velocity fields and film topology, pressure distribution inside film is derived with the Poisson equation. Considering characteristics of traveling waves, the experimental results are presented respectively in spatial mode and temporal mode. In spatial mode, capillary wave dynamics are demonstrated out of velocity field, film topology and pressure distribution, which reveals that flow reversal occurs at capillary troughs. In temporal mode, the mechanism of flow reversal at capillary troughs is scrutinized on the basis of high-frequency velocity sampling and the derived pressure gradient. It is shown that flow reversal at capillary troughs is triggered due to occurrence of positive pressure gradient at the back side of the capillary wave crest, rather than the trough upstream as stated by the previous researchers. By elucidating the dynamics of flow reversal, mechanisms for the upper limit of Reynold number with respect to flow reversal underneath capillary wave trough were proposed, which might be the gradually saturated deceleration from the capillary curvature and shorten deceleration duration determined by the wave speed and capillary wave length. Our results should be of interest for optimization of the mass transport model of falling liquid films and shed light on the revealing of flow reversal mechanism. View Full-Text
Keywords: falling liquid films; flow reversal; capillary wave; solitary wave; PIV; PLIF; PIV derived pressure falling liquid films; flow reversal; capillary wave; solitary wave; PIV; PLIF; PIV derived pressure
►▼ Show Figures 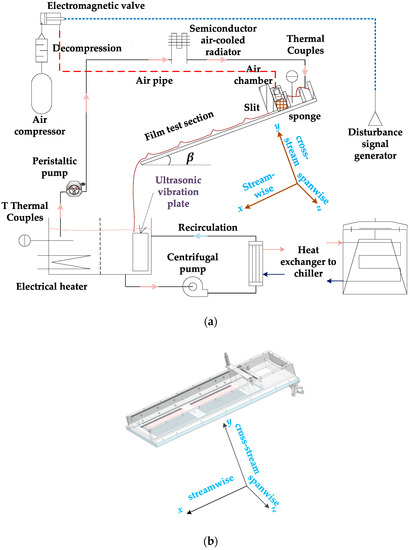