A series of self-matting waterborne polyurethanes (WPUs) were successfully prepared by introducing hydrophilic units into both soft and hard segments. By employing a polycaprolactone polyol containing carboxylate groups within the polymer chains to provide hydrophilicity directly, the matting performance of WPU films was greatly improved. The chemical structures of the WPU resins were confirmed by FTIR spectroscopy, and the morphology of WPU films was observed by SEM. The parameters of WPU preparation were investigated in detail. It was found that the surface gloss of WPU films as well as the particle sizes of WPU dispersions were closely associated with the content of hydrophilic units. As the content of carboxylates or sulfonates increased, the particle sizes of WPU decreased, while the gloss increased gradually. When the particle sizes of dispersions were greater than 3 μm, the gloss of WPU films coated on a leather surface was lower than 1. The results of TG showed that, the initial decomposition temperatures of WPU films were higher than 280 °C, which indicated these films also had good thermal stability. The prepared self-matting WPU coatings would have potential application prospects in the field of leather finishing. View Full-Text
Keywords: self-matting; waterborne polyurethane; leather finishing self-matting; waterborne polyurethane; leather finishing
►▼ Show Figures 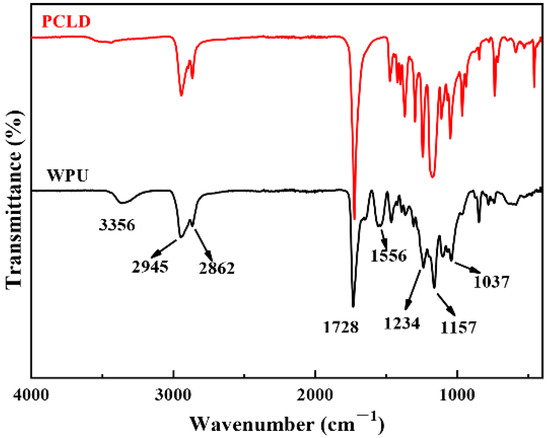