Bovine mastitis, an infection of the cow’s mammary gland, is frequently caused by Streptococcus uberis and causes major economic losses in the dairy industry. The intramammary administration of antibiotics currently remains the predominant preventive and therapeutic measure. These antimicrobial compounds, of which some are considered critical in human health care, are frequently applied as dry therapy resulting in their consistent overuse. Therefore, the use of antibiotics in the dairy sector is being questioned. We here identified two endolysins, i.e., PlySs2 and PlySs9, respectively derived from Streptococcus suis serotype-2 and -9 prophages, with lytic activity against S. uberis in an in vitro setting. Both endolysins gave clear lysis zones in spot-on-plate assays and caused a reduction of the optical density in a turbidity reduction assay. In depth characterization identified PlySs9 as the more potent endolysin over PlySs2 with a lower MIC value and about one additional log of killing. PlySs2 and PlySs9 were challenged to a panel of subclinical and clinical S. uberis milk isolates and were both able to lyse all strains tested. Molecular dissection of these endolysins in catalytic and cell wall binding subdomains resulted in major loss of killing and binding activity, respectively. Taken together, we here propose PlySs2 and PlySs9 as candidate compounds to the current antimicrobial arsenal known against bovine mastitis-causing S. uberis as future add-on or replacement strategy to the currently used intramammary antibiotics. View Full-Text
Keywords: PlySs2; PlySs9; bacteriophage-derived endolysins; bovine mastitis; dairy industry; intramammary antibiotics; alternative antimicrobials PlySs2; PlySs9; bacteriophage-derived endolysins; bovine mastitis; dairy industry; intramammary antibiotics; alternative antimicrobials
►▼ Show Figures 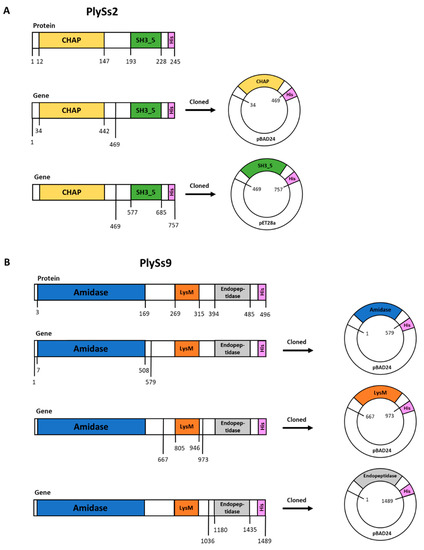