The contamination of surface water by pathogenic bacteria of human origin is an important public health issue. Wetlands can be contaminated with fecal bacteria by water originating from different sources, such as wastewater treatment plants and agriculture. Escherichia coli is a commensal of the human gut flora and the major indication of fecal contamination in surface water. Little is known about the association between fecal bacteria and submerged macrophytes and how this may influence the water quality. We questioned whether macrophytes enhance or inhibit the bacterial growth in wetlands. For this purpose, we grew four different species of macrophytes (Mentha aquatica, Baldellia ranunculoides, Sparganium emersum and Elodea canadensis, in mono- or multispecies cultures) in aquatic rhizotrons and inoculated the devices with a fluorescent strain of Escherichia coli (producing a green fluorescent protein) to simulate the fecal contamination of wetlands. Bacterial survival was monitored by measuring the fluorescence for 19 days. We found (i) that contaminated sediments did not release E. coli in the water column in lentic conditions and (ii) that monocultures of E. canadensis, M. aquatica and S. emersum reduced the E. coli concentration in the water column. This suggests that aquatic plant species may be used in constructed wetlands to clear surface freshwater from bacteria of fecal origin. View Full-Text
Keywords: fecal bacteria; wetlands; macrophytes; antimicrobial compounds; Escherichia coli; GFP fecal bacteria; wetlands; macrophytes; antimicrobial compounds; Escherichia coli; GFP
►▼ Show Figures 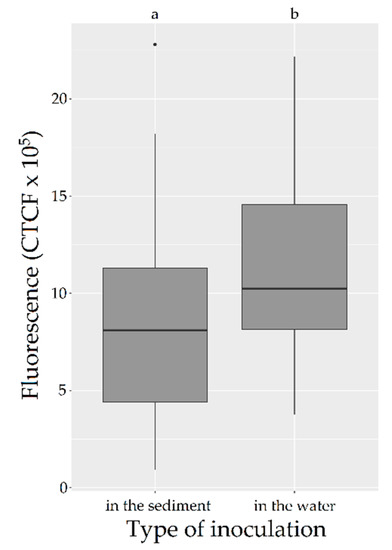