Impact and Sustainability of Antibiotic Stewardship in Pediatric Emergency Departments: Why Persistence Is the Key to Success
Previous Article in Special Issue

Genotypic Characteristics and Correlation of Epidemiology of Staphylococcus aureus in Healthy Pigs, Diseased Pigs, and Environment

Bacterial foodborne infections, including meat-derived infections, are globally associated with diseases and some deaths. Antibiotics are sometimes used to treat bacterial infections. The use of antibiotics by farmers contributes to the development of resistance by foodborne pathogens. This study aimed to investigate the antibiotics used by farmers and the occurrence of antibiotic-resistant Escherichia coli in ready-to-eat (RTE) meat sources. Data was obtained from livestock farmers through the administration of semistructured questionnaires (n = 376) to obtain information on their demographics, knowledge and antibiotic usage. The procedure in the USA Food and Drug Administration (FDA)’s Bacteriological Analytical Manual was used for E. coli detection. Antibiotic resistance test was performed using the disk diffusion method. The findings revealed that most of the farmers were male (74.5%), were aged 30−39 years (28.5%), had tertiary education (30.3%) and had 6−10 years of experience in livestock husbandry. Sheep (65.7%) were the most reared livestock, and antibiotics were mostly used to treat sick animals (36.7%). Tetracycline (27.7%) was the most common antibiotic used by farmers, followed by amoxicillin/clavulanic acid (18.6%) and trimethoprim/sulfamethoxazole (11.7%). Most farmers (56.1%) said they had knowledge of antibiotic usage. The prevalence of E. coli in RTE meats was lowest in pork (6.0%) and highest in chevon (20.0%). E. coli isolates from RTE meats were highly resistant to teicoplanin (96.77%), tetracycline (93.55%), amoxicillin/clavulanic (70.97%), azithromycin (70.97%) and trimethoprim/sulfamethoxazole (58.06%) but was susceptible to chloramphenicol (93.55%), ciprofloxacin (61.29%) and ceftriaxone (58.06%). The multiple antibiotic index ranged from 0.22 to 0.78. Multidrug resistance (93.55%) was high among the E. coli isolates. The resistance pattern AmcAzmTecTeSxt (amoxicillin/clavulanic acid–azithromycin–telcoplanin–tetracycline–trimethoprim/sulfamethoxazole) was the most common. The use of antibiotics by farmers must be well regulated. Sellers of RTE meats also ought to take hygiene practices seriously to keep meat safe and healthy for public consumption. View Full-Text
Keywords: antibiotics; E. coli; farmers; Ghana; ready-to-eat meats antibiotics; E. coli; farmers; Ghana; ready-to-eat meats
►▼ Show Figures 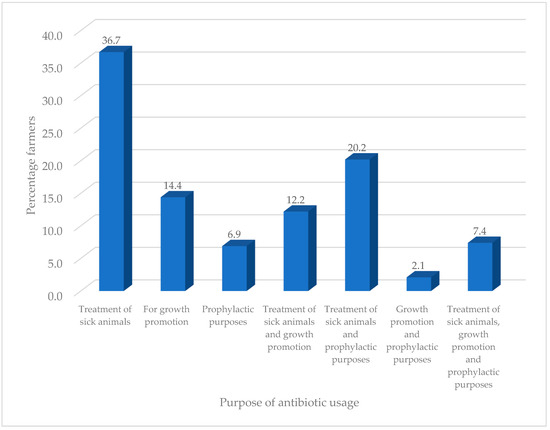