Polyphenols of Honeybee Origin with Applications in Dental Medicine

With the increased scientific interest in green technologies, many researches have been focused on the production of polymeric composites containing naturally occurring reinforcing particles. Apart from increasing mechanical properties, these additions can have a wide range of interesting effects, such as increasing the resistance to bacterial and fungal colonization. In this work, different amounts of two different natural products, namely neem and turmeric, were added to polyethylene to act as a natural antibacterial and antifungal product for food packaging applications. Microscopic and spectroscopic characterization showed that fractions of up to 5% of these products could be dispersed into low-molecular weight polyethylene, while higher amounts could not be properly dispersed and resulted in an inhomogeneous, fragile composite. In vitro testing conducted with Escherichia coli, Staphylococcus aureus, and Candida albicans showed a reduced proliferation of pathogens when compared to the polyethylene references. In particular, turmeric resulted in being more effective against E. coli when compared to neem, while they had similar performances against S. aureus. Against C. albicans, only neem was able to show a good antifungal behavior, at high concentrations. Tensile testing showed that the addition of reinforcing particles reduced the mechanical properties of polyethylene, and in the case of turmeric, it was further reduced by UV irradiation. View Full-Text
Keywords: turmeric; neem; antibacterial; antifungal; polyethylene turmeric; neem; antibacterial; antifungal; polyethylene
►▼ Show Figures 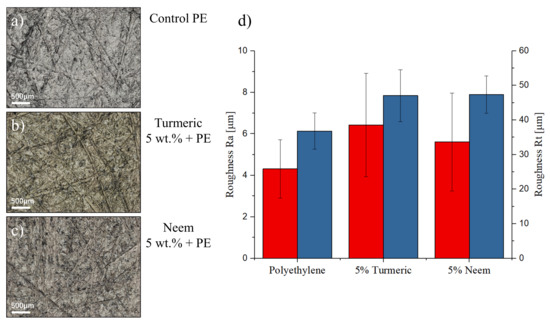