Prostatitis is an inflammatory condition that is related to multiple infectious agents, including bacteria and fungi [1,2,3]. The inflammatory pathways underlying prostatitis have been increasingly studied in recent years, and herbal extracts, especially in combination, have been revealed as a promising tool for the management of clinical symptoms related to the burden of inflammation/oxidative stress occurring in prostatitis [4]. Strictly related to this disorder, inflammation of the lower urinary tract (LUTS) is reported as the second most common human infectious disorder [5]. Currently, α-blockers represent the first-choice treatment for LUTS in patients diagnosed with both prostatitis and benign prostate hyperplasia (BPH) [6]. On the other hand, traditional herbal extracts were efficacious in controlling the inflammatory component associated with these disorders [7,8,9,10], with the efficacy that could be improved through their pharmacological associations [11]. This is consistent, at least in part, with the scientific literature suggesting the benefits of the combination of herbal extracts, usually employed as food supplements, for treating chronic inflammatory diseases [12,13,14,15,16]. Increasing attention to alternative medications, including nutraceuticals and herbal preparations that could display a lower grade of side effects, has led to the exploration of extracts prepared from plants traditionally used by folk populations to manage inflammatory conditions [14]. These extracts, especially those prepared via traditional infusions or decoctions, could not only be effective and safe due to their long-term use, but also represent novel strategies for implementing local botanical chain productions [15,16].
Phyllanthus niruri is a traditional Ayurvedic remedy that has long been employed in a wide range of inflammatory disorders. It is also able to induce anti-proliferative effects on human prostate cancer PC3 cell lines [17]. Boldine, the main active principle of Peumus boldus, revealed to be effective in inducing apoptosis in human bladder cancer cells, as well [18]. Ononis spinosa is a folk remedy used in the treatment of urinary tract infections and stones [19]. Analogous traditional uses have been described for Solidago virga-aurea, although the scientific literature reported anti-proliferative effects, possibly related to the presence of terpene and phenolic compounds, in the phytocomplex [20,21]. Similarly, Epilobium angustifolium has been shown to be effective in preventing BPH [22] due to its richness in phenolic compounds [23].
In this context, the aim of the present study was to explore the antimicrobial and anti-inflammatory effects of water extracts from S. virga-aurea, O. spinosa, P. boldus, E. angustifolium, and P. niruri. Although the water solubility of plant secondary metabolites could be limited, previous studies of ours suggested the use of microwave- and ultrasound-assisted methods for improving phenol extraction that was paralleled by increased anti-inflammatory, antioxidant, and antimicrobial effects [16,24,25]. In the present study, the extracts’ antimicrobial activity was tested against bacterial (Escherichia coli, Pseudomonas aeruginosa, Staphylococcus aureus, and Bacillus cereus) and fungi strains (Candida albicans, C. tropicalis) involved in prostatitis and LUTS [2,3,26,27,28]. Additionally, anti-mycotic activities were also tested against multiple species of dermatophytes (Trichophyton rubrum, T. tonsurans, T. erinacei, Arthroderma crocatum, A. quadrifidum, A. gypseum, A. Currey, and A. insingulare). This is consistent with the incidence of dermatophyte infections in patients suffering from urinary tract disorders, including renal failure and prostate adenocarcinoma [29,30,31]. Anti-inflammatory effects, in terms of reduction of prostaglandin production, were also evaluated in a preclinical model of prostatitis consisting of isolated rat prostate specimens challenged with lipopolysaccharide (LPS). The study also compared the efficacy of single extracts and their pharmacological association (Fluxonorm®), and the obtained results supported the rationale for their use to treat clinical symptoms related to prostatitis and LUTS. In order to improve our knowledge about the mechanism of action of the studied herbal extracts, a fingerprint analysis via high-performance liquid chromatography coupled to ultraviolet and mass spectrometry (HPLC-UV-MS) was conducted to identify and quantify selected phenolic compounds, in the phytocomplex. Specifically, gallic acid, rutin, catechin, and epicatechin were selected considering their intrinsic antimicrobial and anti-inflammatory properties [32,33]. Finally, a bioinformatics analysis was also carried out to predict putative human and microbial enzymes targeted by the extracts’ phytocompounds and underlying the observed bio-pharmacological effects.

P. niruri, E. angustifolium, P. boldus, S. virga-aurea, and O. spinosa extracts (10 mg/mL) were analyzed for phenol quantitative determination using a reversed-phase HPLC-UV-MS in gradient elution mode. The separation was conducted within 60 min, starting from the conditions: water/acetonitrile: 93:7, (v/v). The details about the gradient are listed in Table 1.
The HPLC apparatus consisted of two PU-2080 PLUS chromatographic pumps, a DG-2080-54 line degasser, a mix-2080-32 mixer, a UV-2075 PLUS UV detector, an AS-2057 PLUS autosampler, and CO-2060 PLUS column thermostat, all made by JASCO (Tokyo, Japan). The used mass spectrometer was an Expression-L compact mass spectrometer (Advion, Ithaca, NY, USA). Integration was performed by JASCO ChromNAV2 chromatography software, and the separation was performed by gradient elution on an Agilent (Santa Clara, CA, USA) InfinityLab Poroshell 120 reverse phase column (C18, 150 mm × 4.6 mm ID, 2.7 µm). The analytical conditions for the separation of gallic acid, catechin, epicatechin and rutin were in agreement with the study by Rodríguez-Delgado and colleagues [34]. Extracts were qualitatively analyzed with an Advion Expression-L compact mass spectrometer (MS) in negative ion mode. MS signal identification was realized through comparison with standard solutions and MS spectra present in the recognized Mass Bank Europe database (https://massbank.eu/MassBank/). Quantitative determination of phenolic compounds identified by MS analysis was performed via a UV detector at 240 nm wavelength. Quantification was done through 7 point calibration curves, with linearity coefficients (R2) > 0.999, in the concentration range of 2–140 µg/mL. The area under the curve obtained from the HPLC chromatograms was used to quantify analyte concentration in the extracts.
Protonic nuclear magnetic resonance (1H-NMR) analysis was conducted with a Varian 300 MHz spectrometer using a standard proton pulse sequence (s2pul). Samples were prepared as follows: 10 mg/mL gallic acid and 50 mg/mL extract were sonicated in CD3OD for 30 min at room temperature. Next, 600 µL of each sample was transferred into the NMR tube and analyzed with the following parameters: 1.706 s acquisition time, 4803.1 Hz width, and 64 scans.

The cytotoxicity limit of the extracts in the range 0.1–20 mg/mL was evaluated through a lethality bioassay of the brine shrimp Artemia salina, as previously reported [16]. The experiments were carried out in triplicate.

The effects of the extracts (100–500 µg/mL) on myocyte C2C12 and prostate cancer PC3 cell viability were determined through the 3-(4,5-dimethylthiazol-2-yl)-2,5-diphenyltetrazolium bromide (MTT) test. The experimental conditions were fully described in our previous paper [35].

The protective effects of the extracts were investigated through an ex vivo model consisting of isolated prostate challenged with E. coli lipopolysaccharide (LPS) at 10 µg/mL, as previously reported [9]. Prostates were collected from 24 Sprague Dawley rats (200–250 g). The study was approved by the Local Ethical Committee and the Italian Ministry of Health. The approval number of the study was the following: authorization N. F4738.N.XTQ, delivered for the period 11 November 2018–11 November 2019. During the study, the prostate specimens were separately treated with the extracts of O. spinosa, S. virga-aurea, P. niruri, P. boldus, and E. angustifolium (100, 100, 150, 200, and 250 µg/mL, respectively) or Fluxonorm® (800 µg/mL). Afterward, the prostate tissue supernatants were assayed, as described below.

The levels of 8-iso-PGF2α and PGE2 in the supernatants were determined by radioimmunoassay (RIA). The detailed protocol was described in our previous study [36].

The experimental data related to in vitro and ex vivo studies were analyzed through the analysis of variance (ANOVA) followed by the Newman–Keuls post hoc test. GraphPad Prism software was employed for the statistical analysis, while the software G*Power (v3.1.9.4, University of Kiel, Kiel, Germany) was used for calculating the animal number for the experiments, where p < 0.05 was considered statistically significant.

The results of the present study showed moderate antimicrobial and anti-inflammatory effects induced by water extracts of S. virga-aurea, P. boldus, E. angustifolium, P. niruri, and O. spinosa, that could be related, at least partially, to the phenolic composition of the phytocomplex. Future phytochemical investigations may further unravel the relationships between extract composition and bio-pharmacological effects.

This work was supported by OMEGA PHARMA Srl (Cantù, Italy).

The authors would like to thank Lucio Boschi (Veridia Italia Srl) for technical assistance during the study that was conducted within a joint project between the Department of Pharmacy of “G. d’Annunzio” University and Veridia Srl (Research Program 2020–2023). Study Coordinators were Giustino Orlando, Luigi Menghini, and Claudio Ferrante.

The study was supported by OMEGA PHARMA Srl. 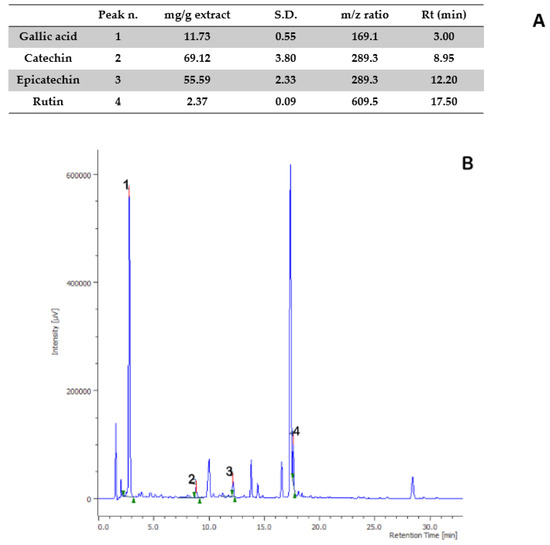 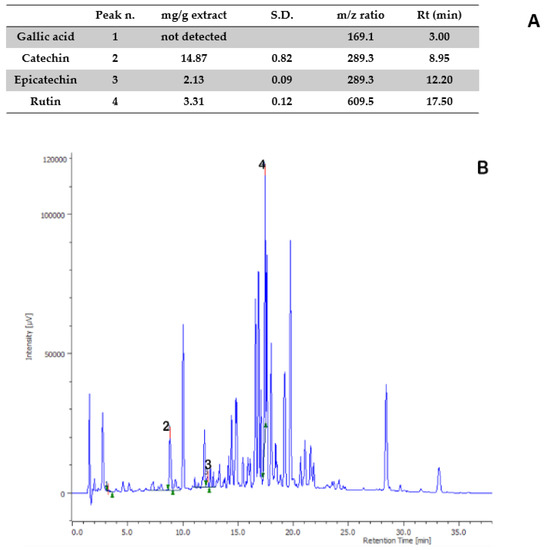 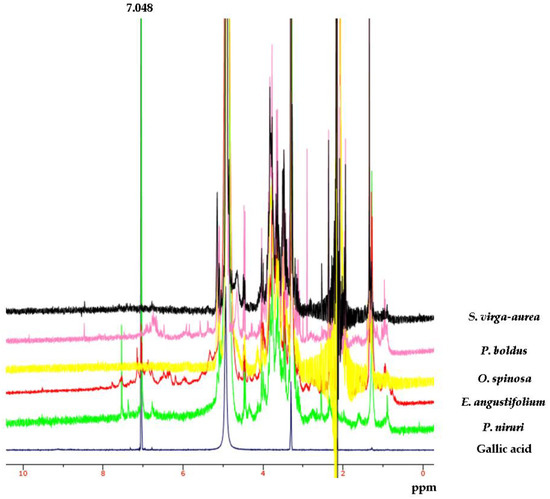 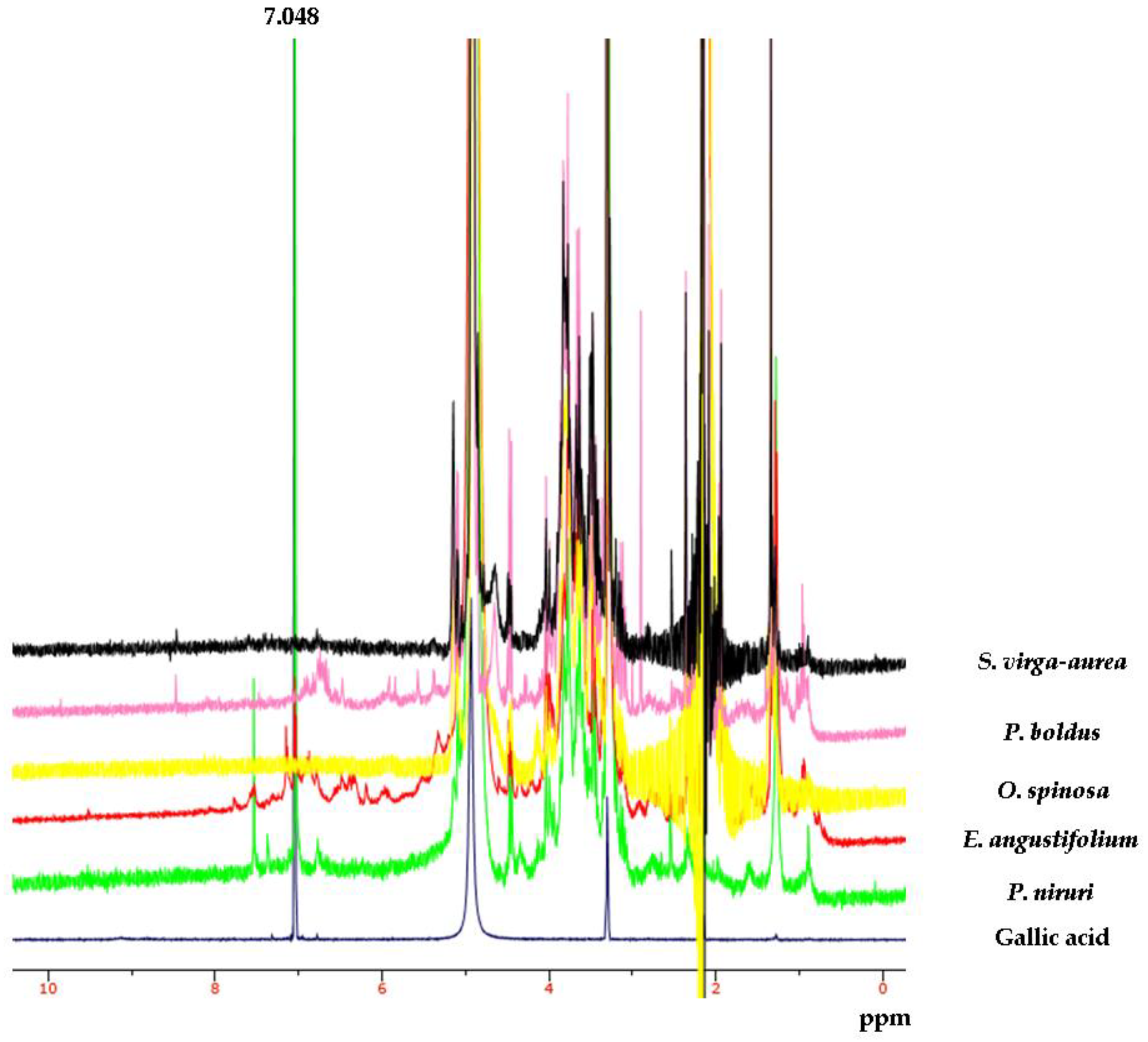 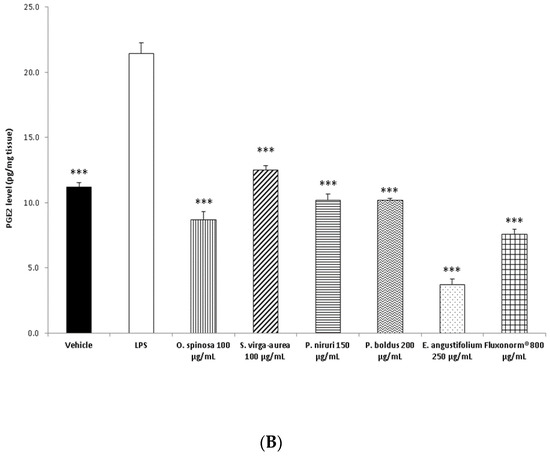 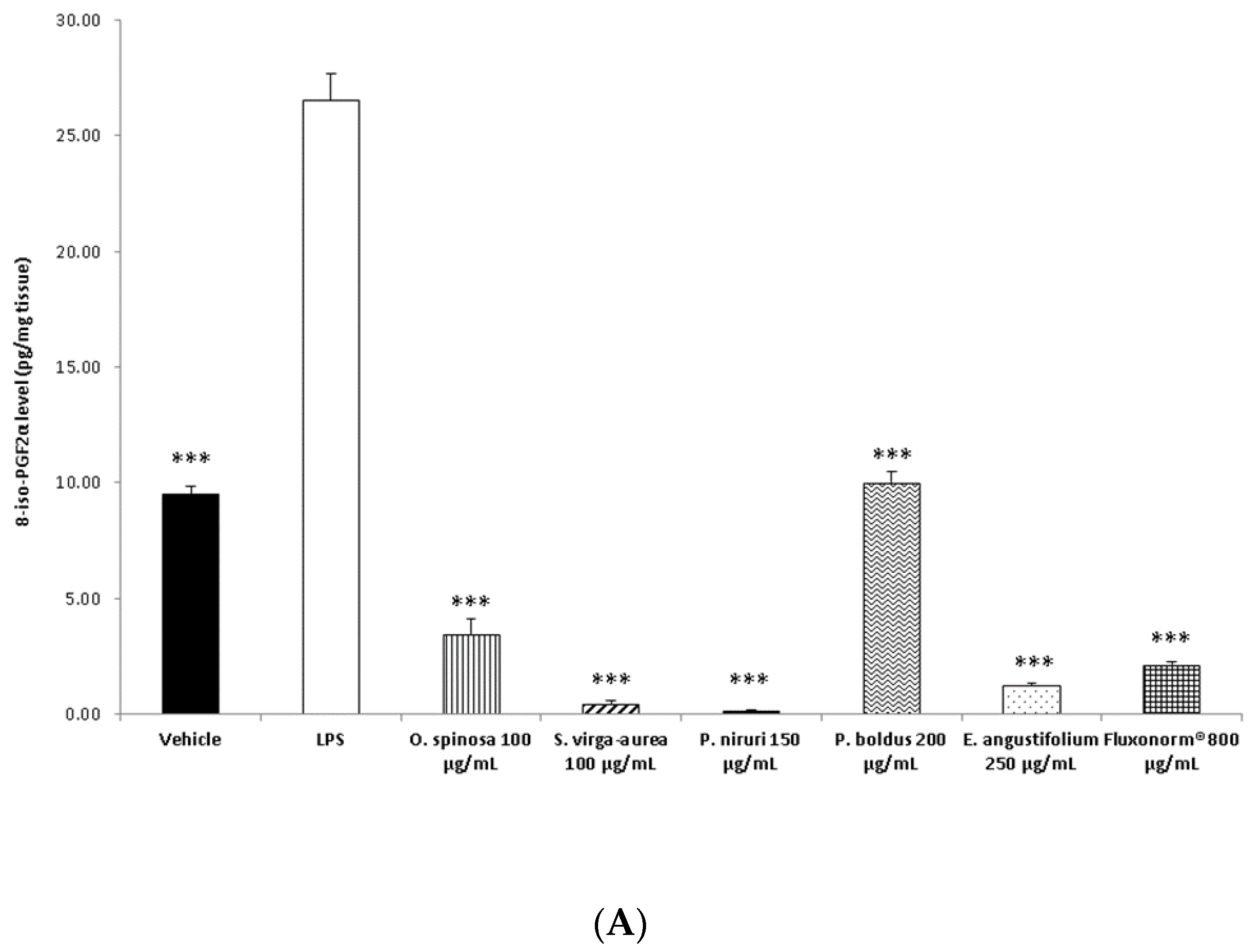 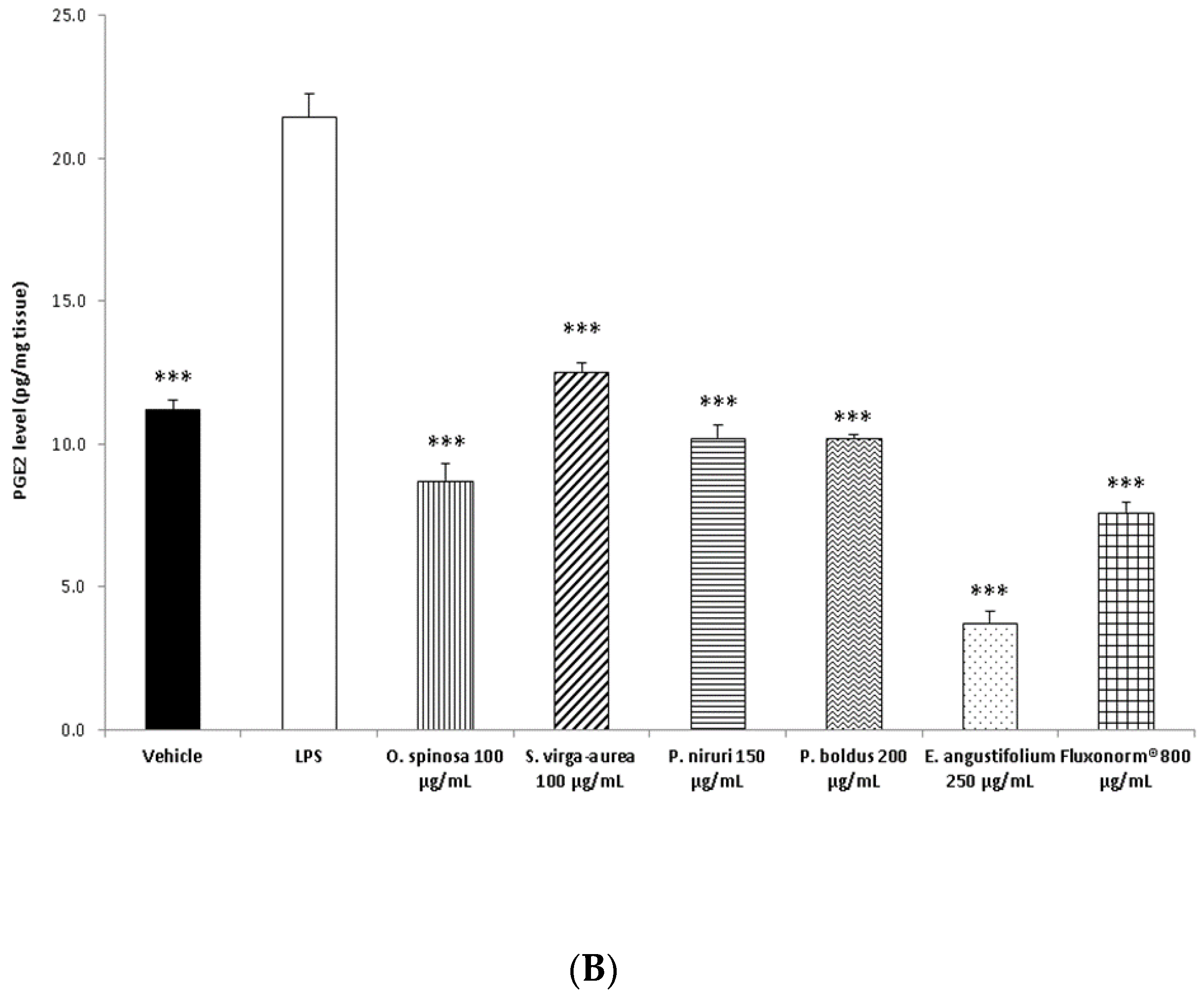 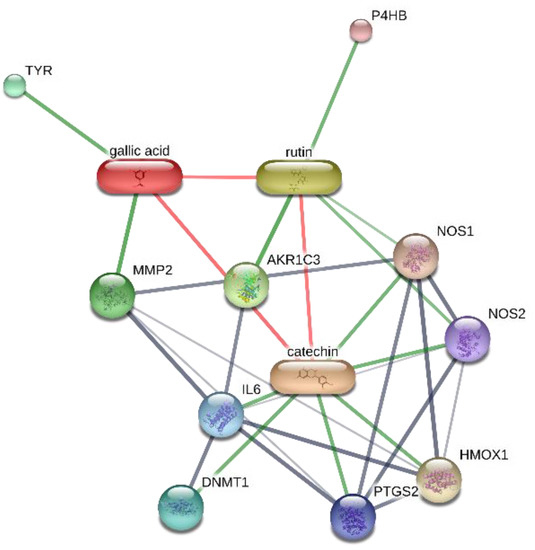