The CS-αβ architecture is a structural scaffold shared by a high number of small, cationic, cysteine-rich defense peptides, found in nearly all the major branches of the tree of life. Although several CS-αβ peptides involved in innate immune response have been described so far in bivalve mollusks, a clear-cut definition of their molecular diversity is still lacking, leaving the evolutionary relationship among defensins, mytilins, myticins and other structurally similar antimicrobial peptides still unclear. In this study, we performed a comprehensive bioinformatic screening of the genomes and transcriptomes available for marine mussels (Mytilida), redefining the distribution of mytilin-like CS-αβ peptides, which in spite of limited primary sequence similarity maintain in all cases a well-conserved backbone, stabilized by four disulfide bonds. Variations in the size of the alpha-helix and the two antiparallel beta strand region, as well as the positioning of the cysteine residues involved in the formation of the C1–C5 disulfide bond might allow a certain degree of structural flexibility, whose functional implications remain to be investigated. The identification of mytilins in Trichomya and Perna spp. revealed that many additional CS-αβ AMPs remain to be formally described and functionally characterized in Mytilidae, and suggest that a more robust scheme should be used for the future classification of such peptides with respect with their evolutionary origin. View Full-Text
Keywords: bivalves; mussels; antimicrobial peptides; innate immunity; defensins bivalves; mussels; antimicrobial peptides; innate immunity; defensins
►▼ Show Figures 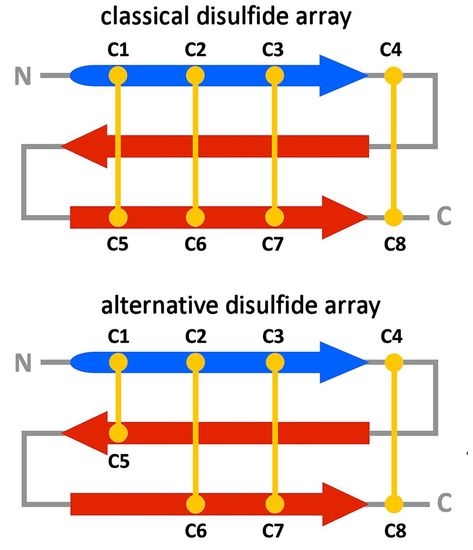