Perceptions of Antibiotic Therapy Among Nursing Home Residents: Perspectives of Caregivers and Residents in a Mixed Exploratory Study
Next Article in Special Issue

Development of a High Throughput Screen for the Identification of Inhibitors of Peptidoglycan O-Acetyltransferases, New Potential Antibacterial Targets

The O-acetylation of peptidoglycan occurs in many Gram-negative and most Gram-positive pathogens and this modification to the essential wall polymer controls the lytic activity of the autolysins, particularly the lytic transglycosylases, and inhibits that of the lysozymes of innate immunity systems. As such, the peptidoglycan O-acetyltransferases PatA/B and OatA are recognized as virulence factors. In this study, we present the high throughput screening of small compound libraries to identify the first known inhibitors of these enzymes. The fluorometric screening assay developed involved monitoring the respective O-acetyltransferases as esterases using 4-methylumbelliferylacetate as substrate. Pilot screens of 3921 compounds validated the usefulness of the HTS protocol. A number of potential inhibitors were identified amongst a total of 145,000 low molecular-weight compounds, some of which were common to both enzymes, while others were unique to each. After eliminating a number of false positives in secondary screens, dose response curves confirmed the apparent specificity of a benzothiazolyl-pyrazolo-pyridine as an inhibitor of Neisseria gonorrhoeae PatB, and several coumarin-based compounds as inhibitors of both this PatB and OatA from Staphylococcus aureus. The benzothiazolyl-pyrazolo-pyridine was determined to be a non-competitive inhibitor of PatB with a Ki of 126 µM. At 177 µg/mL and close to its solubility limit, this compound caused a 90% reduction in growth of N. gonorrhoeae, while growth of Escherichia coli, a bacterium that lacks PatB and, hence, does not produce O-acetylated peptidoglycan, was unaffected. These data provide preliminary proof of concept that peptidoglycan O-acetyltransferases would serve as useful antibacterial targets. View Full-Text
Keywords: peptidoglycan; O-acetyltransferase; antibiotic target; high throughput screening; HTS peptidoglycan; O-acetyltransferase; antibiotic target; high throughput screening; HTS
►▼ Show Figures 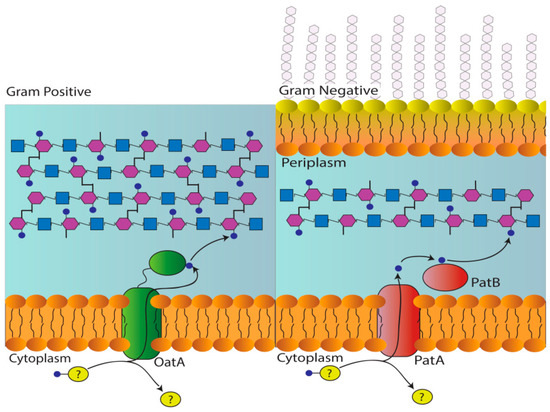