A 2-Year Single-Centre Audit on Antibiotic Resistance of Pseudomonas aeruginosa, Acinetobacter baumannii and Klebsiella pneumoniae Strains from an Intensive Care Unit and Other Wards in a General Public Hospital in Greece

Hospital-acquired infections, particularly in the critical care setting, are becoming increasingly common during the last decade, with Gram-negative bacterial infections presenting the highest incidence among them. Multi-drug-resistant (MDR) Gram-negative infections are associated with high morbidity and mortality, with significant direct and indirect costs resulting from long hospitalization due to antibiotic failure. As treatment options become limited, antimicrobial stewardship programs aim to optimize the appropriate use of currently available antimicrobial agents and decrease hospital costs. Pseudomonas aeruginosa, Acinetobacter baumannii and Klebsiella pneumoniae are the most common resistant bacteria encountered in intensive care units (ICUs) and other wards. To establish preventive measures, it is important to know the prevalence of Gram-negative isolated bacteria and antibiotic resistance profiles in each ward separately, compared with ICUs. In our single centre study, we compared the resistance levels per antibiotic of P. aeruginosa, A. baumannii and K.pneumoniae clinical strains between the ICU and other facilities during a 2-year period in one of the largest public tertiary hospitals in Greece. The analysis revealed a statistically significant higher antibiotic resistance of the three bacteria in the ICU isolates compared with those from other wards. ICU strains of P. aeruginosa presented the highest resistance rates to gentamycin (57.97%) and cefepime (56.67%), followed by fluoroquinolones (55.11%) and carbapenems (55.02%), while a sensitivity rate of 97.41% was reported to colistin. A high resistance rate of over 80% of A. baumannii isolates to most classes of antibiotics was identified in both the ICU environment and regular wards, with the lowest resistance rates reported to colistin (53.37% in ICU versus an average value of 31.40% in the wards). Statistically significant higher levels of resistance to most antibiotics were noted in ICU isolates of K. pneumoniae compared with non-ICU isolates, with the highest difference—up to 48.86%—reported to carbapenems. The maximum overall antibiotic resistance in our ICU was reported for Acinetobacter spp. (93.00%), followed by Klebsiella spp. (72.30%) and Pseudomonas spp. (49.03%).
Keywords: antibiotic resistance; antimicrobial resistance; Pseudomonas aeruginosa; Acinetobacter baumannii; Klebsiella pneumoniae; intensive care unit antibiotic resistance; antimicrobial resistance; Pseudomonas aeruginosa; Acinetobacter baumannii; Klebsiella pneumoniae; intensive care unit

Rapid dissemination of antibiotic-resistant Gram-negative infections constitute a worldwide problem with an increasing health and economic burden [1]. A recently published European Centre for Disease Prevention and Control (ECDC) study estimates that about 33,000 people die each year as a direct consequence of an infection due to bacteria resistant to antibiotics [2]. Healthcare associated infections (HAI’s) account for the major burden of these multidrug-resistant infections, while last-line treatments, such as carbapenems and colistin, become increasingly less reliable, limiting the available therapeutic options [3].
According to the European Antimicrobial Resistance Surveillance Network (EARS-Net) data from 2015, Greece is among the countries with the greatest burden of infections due to antibiotic-resistant bacteria in the EU and EEA [4]. In 2015, most of this burden was due to infections with carbapenem-resistant or colistin-resistant bacteria [2,4,5]. A mean incidence of 0.48 per 1000 patient-days and a crude 28-day mortality rate of 34.4% were reported from the Hellenic Center for Disease Control and Prevention (HCDCP) in 2014, in the context of a national action plan to combat carbapenem-resistant Gram-negative pathogens in acute-care hospitals in Greece [6].
Moreover, the annual report of the EARS-Net for 2017 shows that Greece has the highest percentage of resistance to carbapenems and fluoroquinolones for Klebsiella pneumoniae among all European countries, with a combined resistance to three or more antimicrobial groups among piperacillin/tazobactam, ceftazidime, fluoroquinolones, aminoglycosides and carbapenems being above 30% for Pseudomonas aeruginosa, with resistance of Acinetobacter baumannii to carbapenems being raised to 94% [7].
Antimicrobial stewardship programs aim to optimize the appropriate use of currently available antimicrobial agents to improve therapeutic results for Gram-negative multi-drug-resistant (MDR) infections, reducing antimicrobial resistance and decreasing hospital costs [8]. P. aeruginosa, A. baumannii, and K. pneumoniae are encountered more frequently than other pathogens in intensive care units (ICUs). To establish preventive measures, it is crucial to know the antibiotic resistance profiles in each ward separately compared with ICUs. The aim of the present study is to compare the resistance levels of P. aeruginosa, A. baumannii and K. pneumoniae isolates between ICUs and other facilities in two consecutive years, from January 2017 until December 2018, in one of the largest public tertiary hospitals in Greece. This will help to implement more effective strategies for the reduction of multidrug resistance.

We analyzed the overall 2-year and semester resistance rates in 21,836 tests of P. aeruginosa against routinely tested individual antimicrobial agents (Table A1). All analyses was performed with SPSS Statistics version 24.0 (IBM, Armonk, NY, USA) [9]. The relevant data were analyzed in a two year period (2017–2018) and each semester was analyzed separately. Differences between means regarding the resistance of P. aeruginosa between ICUs and the wards (Internal Medicine A, Pulmonary A, Internal Medicine B, Pulmonary B, Cystic Fibrosis Unit, Urology) were determined by univariate analysis of variance and Tukey’s multiple range tests. A significance level of 0.05 was used. The test results are given in the corresponding tables in the appendix (Table A2 and Table A3).

We analyzed the overall 2-year and semester resistance rates in 5609 tests of A. baumannii against routinely tested individual antimicrobial agents (Table A4). The relevant data were analyzed in a two year period (2017–2018) and each semester separately. A significance level of p < 0.05 was used. Differences between means regarding the resistance of A. baumannii between ICUs and the wards (Internal Medicine A, Pulmonary A, Pulmonary B) were determined by univariate analysis of variance and Tukey’s multiple range tests. The test results are given in the corresponding tables (Table A5 and Table A6).

We analyzed the overall 2-year and semester resistance rates in 14,918 tests of K. pneumoniae against routinely tested individual antimicrobial agents (Table A7). The relevant data were analyzed in a two year period (2017–2018) and in each semester separately. Differences between means regarding the resistance of K. pneumoniae between ICUs and the wards (Internal Medicine A, Pulmonary A, Internal Medicine B, Pulmonary B, Urology) were determined by univariate analysis of variance and Tukey’s multiple range tests. A significance level of p < 0.05 was used. The test results are given in the corresponding tables (Table A8 and Table A9).

This is a cross-sectional study conducted in a public tertiary hospital in Greece, based on data from the Microbiology Department.

During the 2-year period (January 2017 to December 2018) a total of 888 clinical samples from 345 ICU patients and 5086 samples from 4090 patients hospitalized in other wards were included in this study and proceeded by the Microbiology Laboratory according to established protocols [19,20,21]. The samples included blood, tracheobronchial aspirates, bronchoalveolar lavage fluid, urine, skin, wounds and soft tissue specimens, intravascular catheters and pleural and peritoneal fluid. Blood cultures were incubated in the BacT/Alert system (bioMerieux, Marcy-l’Étoile, France). Isolation and identification of pathogens were carried out according to classical microbiological procedures [22].

Antimicrobial susceptibility testing was performed by the MicroScan system (Siemens, Munich, Germany), according to CLSI guidelines [23,24] and the results were confirmed, when necessary, using a gradient MIC (minimum inhibitory concentration) determining method following the manufacturer’s guidelines (e.g., the E-test bioMerieux, Solna, Sweden). The MICs of colistin were retested via microtiter plates (SensiTestColistin, Liofilchem, Roseto degli Abruzzi, Italy). Sensitivity and resistance breakpoints for the antibiotics were determined according to CLSI interpretive criteria [23,24] and for tigecycline according to Eucast criteria [25]. Escherichia coli ATCC 25922 strain and Pseudomonas aeruginosa ATCC 27853 were used as quality control strains for susceptibility testing.
The phenotypic detection of the production of extended-spectrum beta-lactamases (ESBL) was performed by the double disk synergy test (DDST) according to CLSI guidelines [23]. Metallo-beta-lactamases (MBL) and carbapenemases (KPC) were detected phenotypically by (a) the modified Hodge test [23], (b) the combined disk test, with a meropenem (MER) disk alone, a MER disk plus phenyl boronic acid (PBA), a MER disk plus EDTA and a MER disk plus PBA and EDTA (as described by Tsakris et al. [26]) and (c) the NG CARBA 5 immunochromatographic assay, targeting KPC-, NDM-, VIM- and IMP-type and OXA-48-like carbapenemases following the manufacturer’s guidelines (data presented at 29th ECCMID 2019 [27]. P. aeruginosa strains were tested phenotypically for MBL either by a combined disk test using imipenem (IPM) disk and IPM plus EDTA as described by Yong et al. [28] or by IPM-EDTA double-disk synergy test (DDST) performed as described by Lee et al. [29].
All strains that phenotypically produced more than one or no carbapenemases, the OXA producers and all those tested with NG CARBA 5, were subjected to PCR for blaNDM, blaVIM, blaKPC, and blaOXA-48 genes. They were also examined for the presence of the plasmid-mediated mcr-1 gene for colistin-resistance (data presented at the 28th and 29th ECCMID 2019 [27,30]).

This study included non-duplicate clinical isolates from different patients. All isolates with similar susceptibility patterns from a single patient were excluded. The resistance for P. aeruginosa was measured based on the following antibiotics: amikacin, aztreonam, cefepime, ceftazidime, ciprofloxacin, colistin, gentamicin, imipenem, meropenem, doripenem, piperacillin/tazobactam, tobramycin and levofloxacin. The resistance for A. baumannii was measured based on the following antibiotics: amikacin, ampicillin/sulbactam, cefepime, cefotaxime, ceftazidime, ciprofloxacin, colistin, gentamicin, imipenem, levofloxacin, meropenem, minocycline, tobramycin, trimethoprim/sulfamethoxazole, tetracycline and tigecycline. The resistance for K. pneumoniae was measured based on the following antibiotics: amikacin, amoxicillin/clavulanic acid, ampicillin/sulbactam, cefepime, cefotaxime, cefoxitin, ceftazidime, cefuroxime, ciprofloxacin, colistin, ertapenem, gentamicin, imipenem, meropenem, piperacillin/tazobactam, tetracycline, tobramycin, trimethoprim/sulfamethoxazole, levofloxacin, moxifloxacin and tigecycline.
Our research focuses only on the antibiotics mentioned above since there is an adequate number of samples for these for deducing reliable conclusions and there was a susceptibility testing for them in all four semesters. The wards that were included in this comparative study besides ICU were selected upon the adequate frequency of isolates in all four semesters.

The overall 2-year and semester resistance rates of P. aeruginosa, A. baumannii and K. pneumoniae clinical isolates against individual antimicrobial agents were analyzed. Differences between means regarding the resistance of the three bacteria mentioned above between ICU and other wards were determined by univariate analysis of variance and Tukey’s multiple range tests. The relevant data were analyzed by the two years and by each semester separately. A significance level of p < 0.05 was used.

An increased antimicrobial resistance among Gram-negative bacteria was found in the ICU setting. This rise in Gram-negative isolates has serious health and economic consequences for the national healthcare system, leading to increased morbidity, prolonged length of hospitalization and fatalities. Comprehensive surveillance programs are needed to track the origin and emergence pathways of resistant pathogens. Treatment requires careful consideration due to limited options. Prompt antibiotic utilization and the development of multiple preventive strategies in conjunction with infection controls can optimize patient outcomes. A further survey of resistance profiles in certain antibiotics is required in order to measure the effectiveness of the surveillance programs implemented in our hospital.

The authors would like to thank the consultant physicians in internal medicine departments, Malvina Lada and Constantinos Christopoulos, for comments and suggestions. 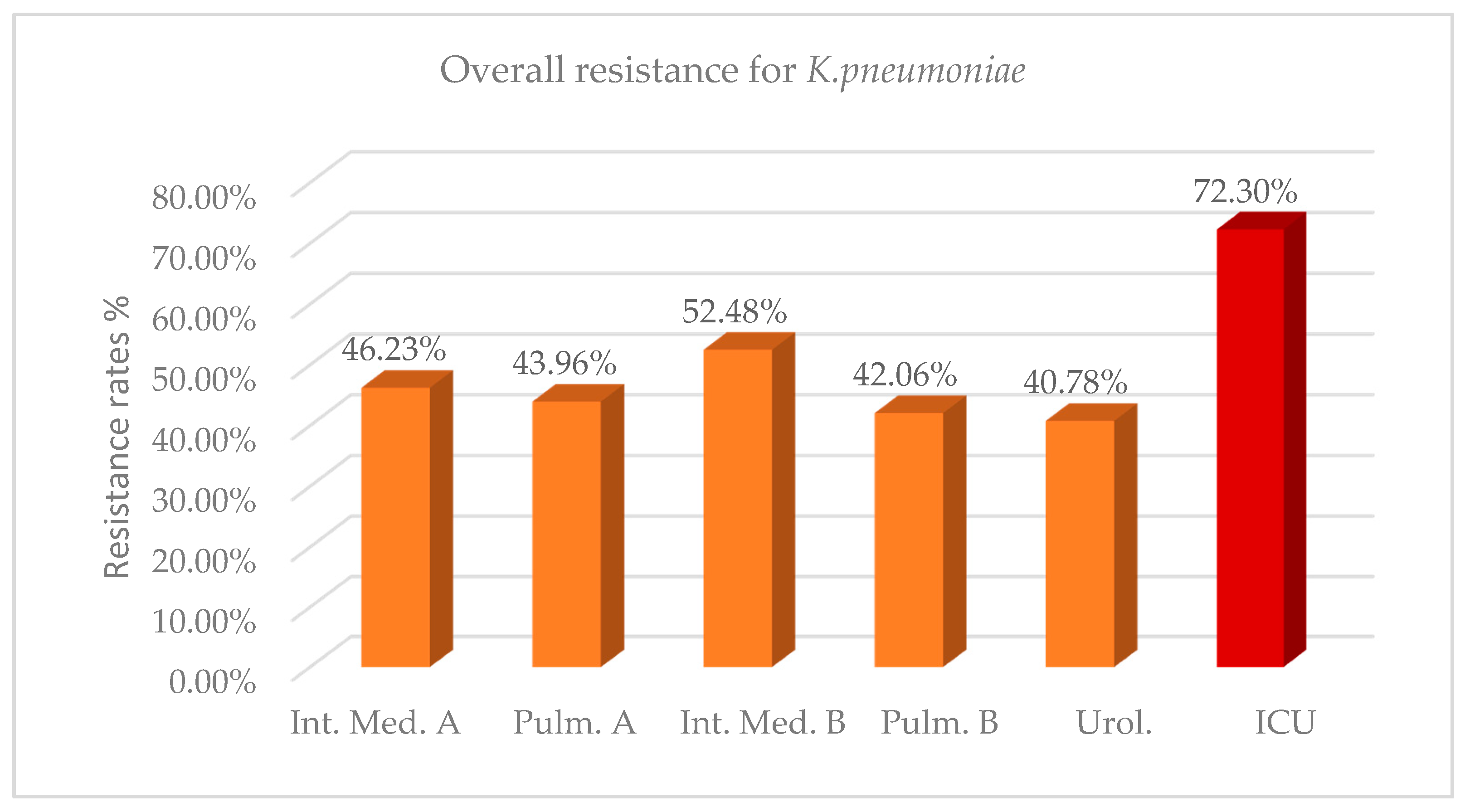