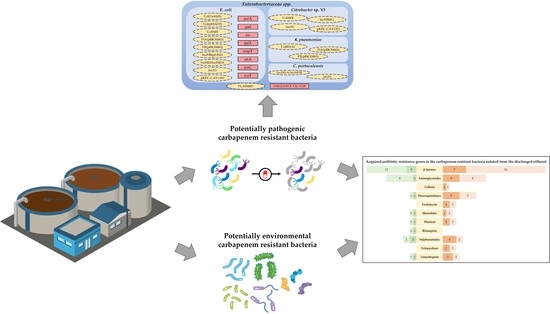 Samples were collected from a Portuguese full-scale WWTP designed to treat the domestic wastewater of approximately 756,000 population equivalents (P.E.) employing biological aerated filter technology. Two sampling points were defined, and three biological samples of 10 L each were collected from the wastewater influent and discharged effluent in sterile containers in November of 2019. After collection, all samples were directly transported to the laboratory under refrigerated conditions and immediately processed upon arrival.

To determine the concentrations of carbapenem resistant bacteria in the wastewater influent and discharged effluent, ten-fold serial dilutions of each sampling point were made in 1 L sterile saline solution and 100 mL samples of each dilution were filtered in triplicate through sterile 0.22 µm pore-size polyethersulfone (PES) filters (Pall Corporation, New York, NY, USA). Then, the filters were placed on selective and chromogenic CHROMagar™ mSuperCARBA™ plates (CHROMagar, Paris, France) and incubated at 30 °C or 42 °C for 24 h. The different incubation temperatures were adapted from the work developed by Hrenovic et al., [16,17,18,19] and used to distinguish between potentially environmental bacteria, which are normally able to grow at 30 °C, and potentially pathogenic bacteria, which are usually also able to survive and grow at higher temperatures. Since many environmental bacteria have optimal growth temperatures below 37 °C, their isolation was performed at 30 °C instead of 37 °C, so that as few different species as possible would have their growth inhibited due to the temperature used. Following incubation, the colonies obtained on each plate were enumerated and their concentrations were calculated and expressed as colony-forming units per millilitre (CFU/mL).

A subset of colonies of each incubated plate showing different phenotypes were randomly picked and sub-cultured in the same medium and conditions until pure colonies were obtained. The pure colonies were inoculated in Tryptic Soy Broth (TSB) (VWR, Radnor, PA, USA) supplemented with 0.5 µg/mL meropenem trihydrate (Sigma-Aldrich, Saint Louis, MO, USA) and again incubated at 30 °C or 42 °C (depending on its original growth temperature) with shaking (150 rpm), overnight. After incubation, the bacterial DNA was extracted using the standard protocol from the DNeasy UltraClean Microbial Kit (Qiagen, Hilden, Germany) and the DNA concentrations and purities were measured using a NanoDrop 1000 Spectrophotometer (Thermo Fisher Scientific, Waltham, MA, USA). The extracted DNAs were then used for the species identification, which was performed by 16S rRNA gene sequencing. Briefly, the 16S rRNA genes from each colony were amplified by PCR with the primer pair Fw [5′-GCCAGCAGCCGCGGTAA-3′] and Rv [5′-AAGGAGGTGATCCRGCCGCA-3′] (adapted from [32]) in a mix reaction containing 12.5 µL NZYTaq II 2x Green MasterMix (NZYTech, Lisbon, Portugal), 200 nM of each forward and reverse primers, 50 ng of DNA template and nuclease free water (to complete 25 µL). The PCR reactions were conducted in a Doppio Termocycler (VWR, Radnor, PA, USA) using the following program: initial denaturation at 95 °C for 3 min; 35 cycles of amplification at 94 °C for 30 s, 57 °C for 30 s, and 72 °C for 45 s; final elongation at 72 °C for 5 min. The PCR products were then sent to Eurofins Genomics (Ebersberg, Germany) for purification and Sanger Sequencing and the resulting sequences were aligned against the National Centre for Biotechnology (NCBI) 16S rRNA gene database using the BLASTn algorithm to determine the taxonomic identities.

Based on the species identification and on the screening of carbapenem resistance genes, the isolate with the biggest number and diversity of the target carbapenem resistance genes from each different species isolated from the discharged effluent samples at 30 °C and 42 °C was chosen to perform an enhanced whole genome sequencing service at MicrobesNG (Birmingham, UK), which combines two distinct technologies: the Illumina short reads and the Oxford Nanopore long reads.
For the Illumina sequencing, plated cultures of each bacterial isolate were inoculated into a cryopreservative (Microbank, Pro-Lab Diagnostics, Richmond Hill, ON, Canada). Then, between 10 and 20 microlitres of each suspension was lysed with 120 μL of Tris-EDTA (TE) buffer containing lysozyme (in a final concentration of 0.1 mg/mL) and RNase A (ITW Reagents, Barcelona, Spain) (in a final concentration of 0.1 mg/mL) and incubated at 37 °C for 25 min. After that, proteinase K (VWR, Radnor, USA) (in a final concentration of 0.1 mg/mL) and SDS (Sigma-Aldrich, Saint Louis, MO, USA) (in a final concentration of 0.5% v/v) were added and the mixture was incubated at 65 °C for 5 min. The genomic DNA was then purified using an equal volume of solid phase reversible immobilization beads, resuspended in EB buffer (Qiagen, Hilden, Germany) and quantified with the Quant-iT dsDNA HS Assay Kit (Thermo Fisher Scientific, Waltham, MA, USA) in an Eppendorf AF2200 plate reader (Eppendorf, Hamburg, Germany). The genomic DNA libraries were prepared on a Hamilton Microlab STAR automated liquid handling system (Hamilton Bonaduz AG, Rapperswil-Jona, Switzerland) using the Nextera XT DNA Library Prep Kit (Illumina, San Diego, CA, USA) according to the manufacturer’s instructions, with the following modifications: (1) 2 ng of DNA were used as input; (2) PCR elongation time was increased from 30 s to 1 min. The pooled libraries were quantified using the Kapa Biosystems Library Quantification Kit for Illumina (Roche, Basel, Switzerland) on a LightCycler 96 Real-Time PCR System (Roche, Basel, Switzerland) and then sequenced with the Illumina HiSeq (Illumina, San Diego, CA, USA) using a 250 bp paired end protocol.
For the Oxford Nanopore sequencing, broth cultures of each bacterial isolate were pelleted out, and then resuspended in a cryopreservative (Microbank, Pro-Lab Diagnostics, ON, Canada). Then, approximately 2 × 109 cells were used for high molecular weight DNA extraction with the Nanobind CCB Big DNA Kit (Circulomics, Baltimore, MD, USA). The DNA was quantified with the Qubit dsDNA HS Assay (Thermo Fisher Scientific, Waltham, MA, USA) in a Qubit 3.0 Fluorometer (Thermo Fisher Scientific, Waltham, MA, USA) and the long read genomic DNA libraries were then prepared with both the Oxford Nanopore SQK-RBK004 Kit and/or with the SQK-LSK109 Kit with Native Barcoding EXP-NBD104/114 (Oxford Nanopore Technologies, Oxford, UK) using 400–500 ng of high molecular weight DNA. At the end, 12 to 24 barcoded samples were pooled together into a single sequencing library and loaded in a FLO-MIN106 (R.9.4 or R.9.4.1) flow cell in a GridION (Oxford Nanopore Technologies, Oxford, UK).
The Illumina reads were trimmed using Trimmomatic v. 0.30 [33] with a sliding window quality cut-off of Q15, the genome assemblies were performed with Unicycler v. 0.4.0 [34] and the contigs were annotated using Prokka v. 1.11 [35].

The AB resistance phenotypes of the potentially pathogenic carbapenem resistant bacteria isolated from the discharged effluent samples were determined according to the EUCAST disk diffusion method on Mueller–Hinton agar (BD Difco, Franklin Lakes, NJ, USA) [41]. From the ABs tested, four belong to the β-lactam class—ampicillin 10 µg (AMP10), cefotaxime 5 µg (CTX5), imipenem 10 µg (IMP10), and meropenem 10 µg (MEM10) (Oxoid, Ottawa, ON, Canada)—and six belong to AB classes for which different acquired resistance genes were found in the whole genomes of some bacterial isolates—chloramphenicol 30 µg (C30), ciprofloxacin 5 µg (CIP5), gentamicin 10 µg (CN10), tetracycline 30 µg (TE30), trimethoprim 5 µg (W5), and trimethoprim + sulphamethoxazole 25 µg (SXT25) (Oxoid, Ottawa, Canada). These ABs were chosen due to their wide use in the treatment of different bacterial infections. Triplicates of each bacterial isolate were adjusted to the 0.5 McFarland standard concentration and inoculated on Mueller–Hinton agar plates. Then, the antimicrobial disks were applied, and the plates were incubated at 35 ± 1 °C for 18 ± 2 h. After incubation, the inhibition zone diameters were measured and the bacterial isolates were categorized as “S” (susceptible, standard dosing regimen), “I” (susceptible, increased exposure), or “R” (resistant) [42]. Bacterial isolates presenting a resistance phenotype to, at least, three different AB classes were considered multi-resistant. The strain Escherichia coli ATCC 25922 was used as a control of these AB susceptibility testing assays.

The whole genome sequencing data files were deposited in GenBank within the BioProject with the SRA accession number PRJNA683808. 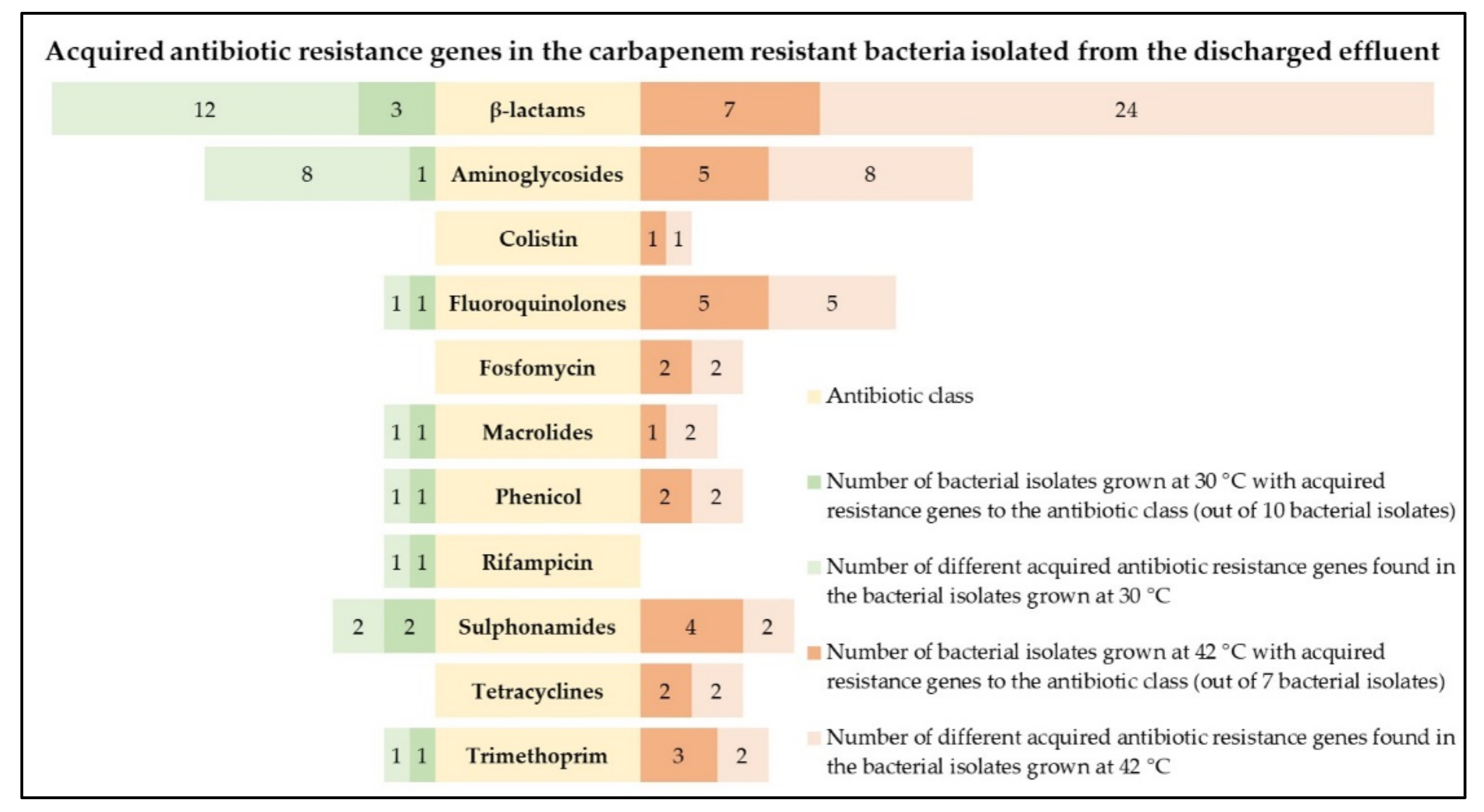 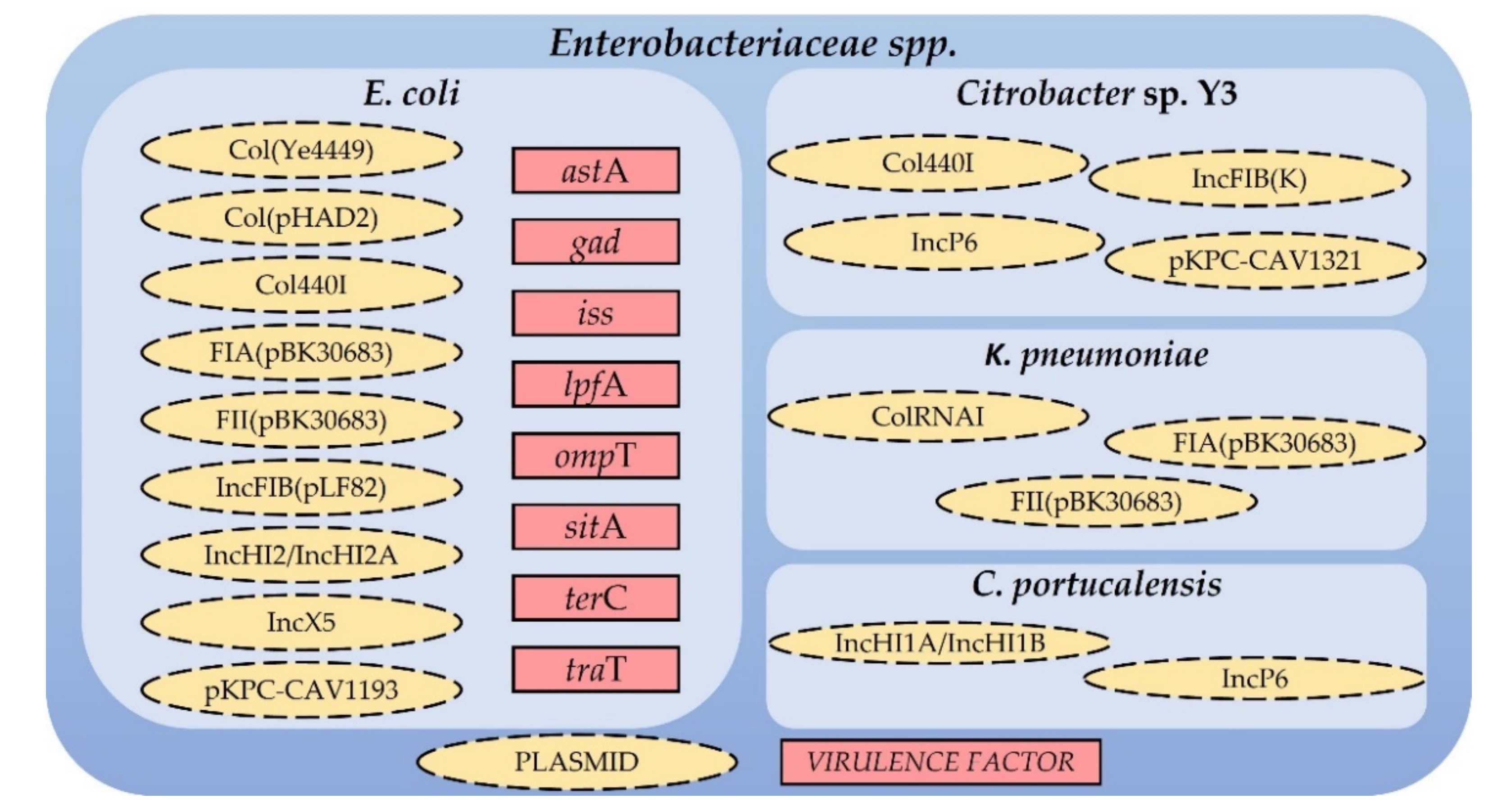