Aminoglycosides in the Intensive Care Unit: What Is New in Population PK Modeling?

Background: Although aminoglycosides are often used as treatment for Gram-negative infections, optimal dosing regimens remain unclear, especially in ICU patients. This is due to a large between- and within-subject variability in the aminoglycoside pharmacokinetics in this population. Objective: This review provides comprehensive data on the pharmacokinetics of aminoglycosides in patients hospitalized in the ICU by summarizing all published PopPK models in ICU patients for amikacin, gentamicin, and tobramycin. The objective was to determine the presence of a consensus on the structural model used, significant covariates included, and therapeutic targets considered during dosing regimen simulations. Method: A literature search was conducted in the Medline/PubMed database, using the terms: ‘amikacin’, ‘gentamicin’, ‘tobramycin’, ‘pharmacokinetic(s)’, ‘nonlinear mixed effect’, ‘population’, ‘intensive care’, and ‘critically ill’. Results: Nineteen articles were retained where amikacin, gentamicin, and tobramycin pharmacokinetics were described in six, 11, and five models, respectively. A two-compartment model was used to describe amikacin and tobramycin pharmacokinetics, whereas a one-compartment model majorly described gentamicin pharmacokinetics. The most recurrent significant covariates were renal clearance and bodyweight. Across all aminoglycosides, mean interindividual variability in clearance and volume of distribution were 41.6% and 22.0%, respectively. A common consensus for an optimal dosing regimen for each aminoglycoside was not reached. Conclusions: This review showed models developed for amikacin, from 2015 until now, and for gentamicin and tobramycin from the past decades. Despite the growing challenges of external evaluation, the latter should be more considered during model development. Further research including new covariates, additional simulated dosing regimens, and external validation should be considered to better understand aminoglycoside pharmacokinetics in ICU patients. View Full-Text
Keywords: aminoglycosides; population pharmacokinetic modeling; intensive care unit; critically ill aminoglycosides; population pharmacokinetic modeling; intensive care unit; critically ill
►▼ Show Figures 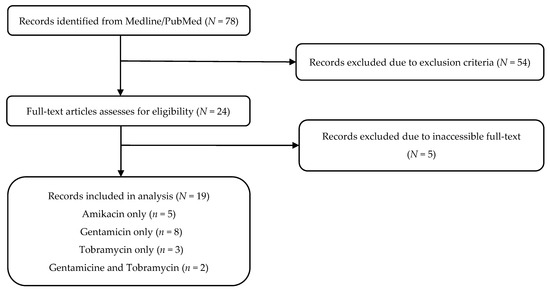