(1) Background: Empirical antibiotics for suspected neonatal early-onset sepsis are often prolonged administered, even in the absence of clinical signs of infection, while awaiting the blood cultures results. The C-reactive protein is widely used to guide antibiotic therapy, although its increase in the first hours of life is not always evidence of infection. The aim of this study was to evaluate the time to positivity (TTP) of blood cultures (BC) that develop pathogens in our population of neonates and determine whether TTP could safely inform the decisions on empirical antibiotic discontinuation in neonatal early-onset sepsis and reduce the use of unnecessary antibiotics. (2) Methods: We retrospectively collected data of all newborns ≥ 34 weeks admitted to the Neonatal Intermediate-Care Unit at Policlinico “A. Gemelli” University Hospital (Rome, Italy) from 2014 to 2018, with suspected early-onset sepsis (EOS). The TTP was the time in hours from the first BC inoculation to the bacterial growth. We defined as positive BC only those with a pathogenic organism. (3) Results: In total, 103 out of 20,528 infants born in the five-year study period were admitted to our Neonatal Intermediate-Care Unit because of a suspected EOS and enrolled into the study. The mean TTP of pathogenic organisms was 17.7 ± 12.5 h versus 80.5 ± 55.8 h of contaminants (p = 0.003). We found ten positive BCs. The TTP of BC was lower than 12, 36, and 48 h in 80%, 90%, and 100% of cases, respectively. CRP levels on admission were similar in infants with a positive and negative BC (p = 0.067). The discontinuation of therapy in asymptomatic infants 48 h after initiation would have resulted in a saving of 217 days of antibiotics (31.1% of total days administered). (4) Conclusion: From our data, the TTP of blood cultures that develop pathogens is less than 48 h in 100% of cases. Therefore, in late preterm and full-term infants with suspected EOS, stopping empiric antibiotics 48 h after initiation may be a safe practice to reduce unnecessary antibiotic use, when blood cultures are negative and infants asymptomatic. View Full-Text
Keywords: newborns; early-onset sepsis; time to positivity; blood culture; c-reactive protein; antibiotics newborns; early-onset sepsis; time to positivity; blood culture; c-reactive protein; antibiotics
►▼ Show Figures 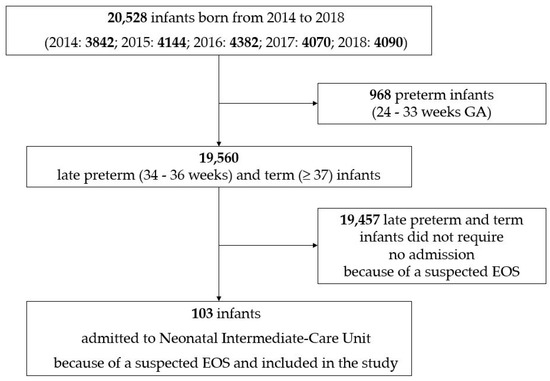