Natural Products and Their Derivatives with Antibacterial, Antioxidant and Anticancer Activities
Next Article in Special Issue

A Pilot Study in Sweden on Efficacy of Benzylpenicillin, Oxytetracycline, and Florfenicol in Treatment of Acute Undifferentiated Respiratory Disease in Calves

Throughout scientific literature, we can find evidence that antimicrobial resistance has become a big problem in the recent years on a global scale. Public healthcare systems all over the world are faced with a great challenge in this respect. Obviously, there are many bacteria that can cause infections in humans and animals alike, but somehow it seems that the greatest threat nowadays comes from the Enterobacteriaceae members, especially Escherichia coli. Namely, we are witnesses to the fact that the systems that these bacteria developed to fight off antibiotics are the strongest and most diverse in Enterobacteriaceae. Our great advantage is in understanding the systems that bacteria developed to fight off antibiotics, so these can help us understand the connection between these microorganisms and the occurrence of antibiotic-resistance both in humans and their pets. Furthermore, unfavorable conditions related to the ease of E. coli transmission via the fecal–oral route among humans, environmental sources, and animals only add to the problem. For all the above stated reasons, it is evident that the epidemiology of E. coli strains and resistance mechanisms they have developed over time are extremely significant topics and all scientific findings in this area will be of vital importance in the fight against infections caused by these bacteria.
Keywords: antimicrobial resistance; antibiotics; public health; microbiology; E. coli antimicrobial resistance; antibiotics; public health; microbiology; E. coli

2. Usage of Antibiotics in Different Countries of EU Region and Spread of E. coli Resistance to Antibiotics

The Gram-negative bacteria called Enterobacteriaceae is known for its amazing capacity to become resistant to many different types of antibiotics [146,147]. Klebsiella and E. coli are the bacteria that cause the largest number of infections in humans [148], and are most often mentioned when speaking of multidrug-resistant bacteria [74,127,149]. Unfortunately, we are witnesses to the fact that E. coli has been increasingly developing strains that are insusceptible to the most common types of antibiotics, such as β-lactams, sulfonamides, fosfomycin, etc. [70,71,88,150]. What presents an even greater concern for doctors and scientists these days is that E. coli reveals resistance even to carbapenems and polymyxins, which are considered by many as the last resort antibiotics [151].
If we analyze the molecular structure of beta-lactams, we can see that they consist of the so-called β-lactam ring, which is supposed to inhibit the synthesis of the bacterial cell wall [70]. Beta-lactam antibiotics are specially targeted at bacterial enzymes called penicillin-binding proteins (PBPs) [152]. Unfortunately for us, bacteria have developed several methods of protection against β-lactams [153]:
In more concrete terms, E. coli produces enzymes that are called “beta-lactamases” [154]. They are quite old compounds with over 2800 unique proteins [155]. The classification of β-lactamases is based on their function and structure [156]. Throughout literature, the most frequently used classification of beta-lactamases is the Ambler classification [157]. It focuses on the similarity of structure and according to this classification we can divide proteins into four main groups: the classes A, C, and D of serine-β-lactamases and the class B of metallo-β-lactamases [157].
Gram-negative bacteria are capable of producing different β-lactamases [156]. From the scientific point of view, the most important beta-lactamases that E. coli produces are carbapenemases [158], the extended-spectrum beta-lactamases (ESBL) [159], and AmpC beta-lactamases (AmpC) [160].

E. coli colonizes human and animals’ gut, which facilitates its spreading from fecal matter to the mouth. Due to its fascinating capacity to transfer drug resistance to other microorganisms and also acquire it from others that share the same environment, we can speak of E. coli’s huge evolutionary advantage. The antibiotic resistance genes are located on plasmids, which enables the easy horizontal spread of antibiotic resistance among different bacteria and, thus, poses a serious threat to medicine. With time, E. coli has developed several methods for neutralizing the power of antibiotics. Unfortunately, only one strain of E. coli can possess resistance genes that can fight off several different types of antibiotics, which makes the whole situation even more complicated for patients with bacterial infections.
The phenomenon of antibiotic resistance in bacteria is multifactorial and depends on an interplay of a number of factors, but the common denominator is clearly the overuse of antibiotics, both in humans and animals. Therefore, the whole world is seriously in need of antibiotic or antimicrobial stewardship programs, which are supposed to prevent the overuse of antibiotics and, thus, reduce antibiotic resistance. On the other hand, all that is not enough if some socioeconomic issues remain unresolved, such as poor hygiene, lack of drinking water, or bad living conditions and overcrowded households. These factors only add to the severity of the problem of antibiotic resistance and go beyond simply restricting the consumption of antibiotics. Obviously, knowing all of the above-mentioned facts, the solution to the problem of antibiotic or multidrug resistance is not a simple one, but requires integrated efforts on all sides. It is of vital importance to closely and continuously monitor hygiene conditions in hospitals as well as waste disposal methods. As far as the treatment of patients with bacterial infections is concerned, such patients need to be carefully examined in order to bring the right decision regarding the choice of antibiotic to be given. We need to continue evaluating antibiotic-sensitivity in humans and animals while also working on the development and implementation of reliable antibiotic strategies.
If we tackle this issue seriously and responsibly and undertake all the necessary corrective actions, we may regain control over E. coli infections, both in Europe and the whole world.

This research was funded by the Ministry for Education, Science and Technological Development of the Republic of Serbia.

This research is supported by COST Action CA18217—European Network for Optimization of Veterinary Antimicrobial Treatment. 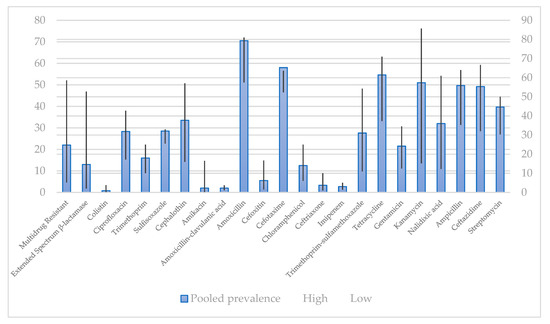 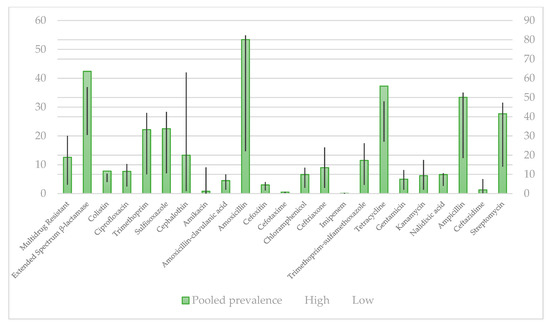 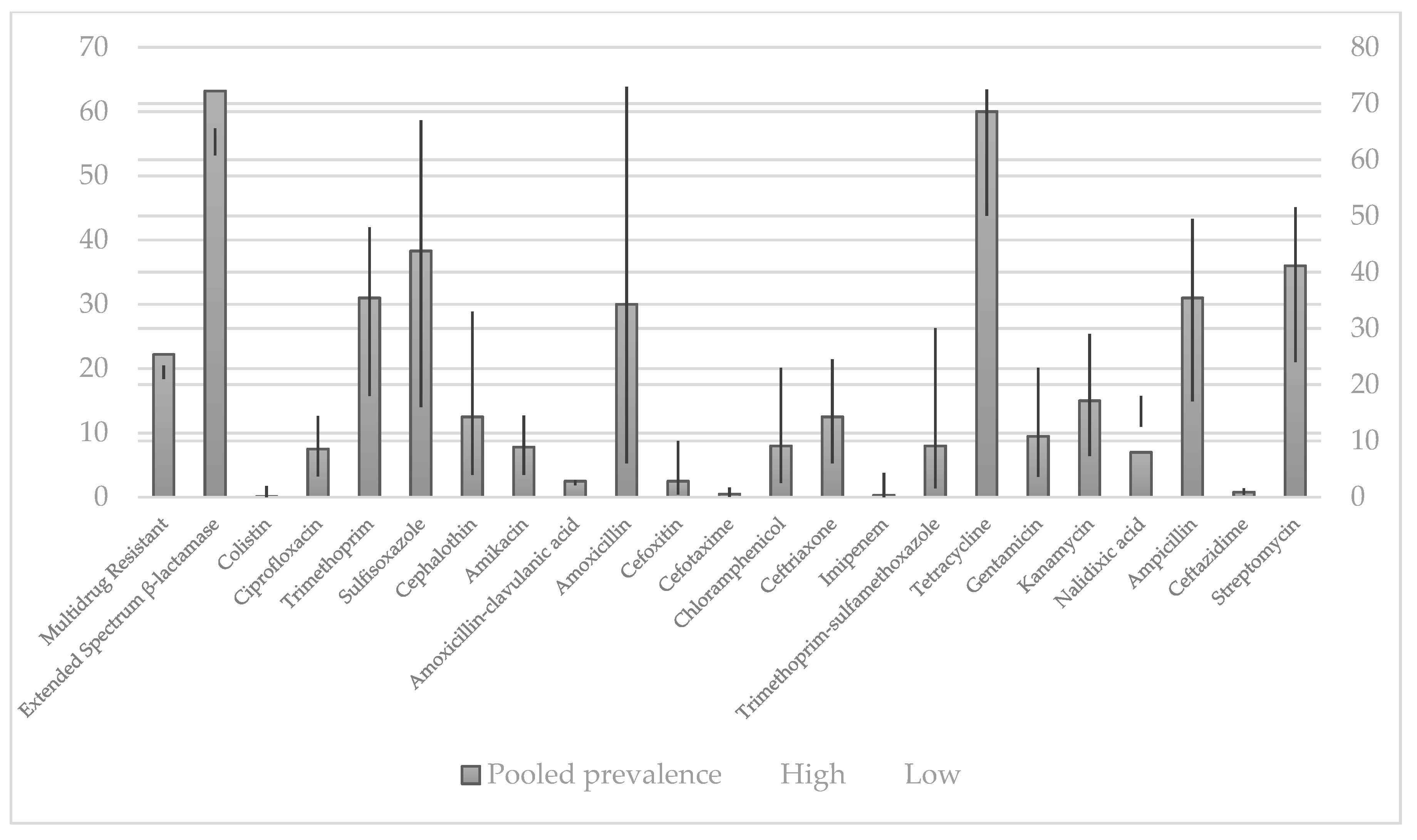