In this work, we developed a novel fluorescent sensor by combining molecularly imprinted polymers (MIPs) with graphene quantum dots (GQDs) for the determination of tetracycline (TC) in aqueous samples. Firstly, we developed a one-pot green method to synthesize GQDs as the fluorescent probes. GQDs with carboxyl groups or amino groups were fabricated. It was found that carboxyl groups played an important role in the fluorescence quenching. Based on these findings, the GQDs-MIPs microspheres were prepared using a sol-gel process. GQDs-MIPs showed strong fluorescent emission at 410 nm when excited at 360 nm, and the fluorescence was quenched in the presence of TC. Under optimum conditions, the fluorescence intensity of GQDs-MIPs decreased in response to the increase of TC concentration. The linear rage was from 1.0 to 104 µg·L−1, and the limit of detection was determined to be 1 µg·L−1. The GQDs-MIPs also demonstrated high selectivity towards TC. The fluorescent sensor was successfully applied for the detection of TC in real spiked milk samples. View Full-Text
Keywords: graphene quantum dots; molecularly imprinted polymers; tetracycline; fluorescence quenching graphene quantum dots; molecularly imprinted polymers; tetracycline; fluorescence quenching
►▼ Show Figures 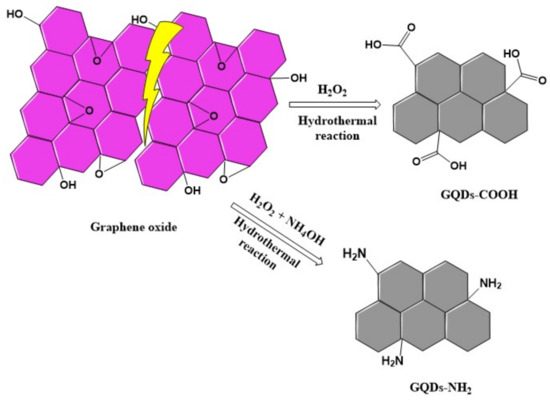