Herein we demonstrate the sensitive nature of human blood-brain barrier (BBB) endothelial cells to sodium azide and its gaseous product. Sodium azide is known to be acutely cytotoxic at low millimolar concentrations, hence its use as a biological preservative (e.g., in antibodies). Loss of barrier integrity was noticed in experiments using Electric Cell-substrate Impedance Sensing (ECIS) biosensor technology, to measure endothelial barrier integrity continuously in real-time. Initially the effect of sodium azide was observed as an artefact where it was present in antibodies being employed in neutralisation experiments. This was confirmed where antibody clones that were azide-free did not mediate loss of barrier function. A delayed loss of barrier function in neighbouring wells implied the influence of a liberated gaseous product. ECIS technology demonstrated that the BBB endothelial cells had a lower level of direct sensitivity to sodium azide of ~3 µM. Evidence of gaseous toxicity was consistently observed at 30 µM and above, with disrupted barrier function and cell death in neighbouring wells. We highlight the ability of this cellular biosensor technology to reveal both the direct and gaseous toxicity mediated by sodium azide. The sensitivity and temporal dimension of ECIS technology was instrumental in these observations. These findings have substantial implications for the wide use of sodium azide in biological reagents, raising issues of their application in live-cell assays and with regard to the protection of the user. This research also has wider relevance highlighting the sensitivity of brain endothelial cells to a known mitochondrial disruptor. It is logical to hypothesise that BBB endothelial dysfunction due to mitochondrial dys-regulation could have an important but underappreciated role in a range of neurological diseases. View Full-Text
Keywords: sodium azide; ECIS; brain endothelium sodium azide; ECIS; brain endothelium
►▼ Show Figures 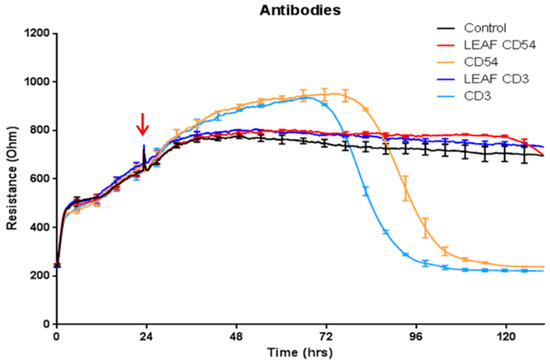