Smartphone and Paper-Based Fluorescence Reader: A Do It Yourself Approach
Previous Article in Journal

Application of Biosensors for Detection of Pathogenic Food Bacteria: A Review

Global growth of the food industry and the demand for new products with natural characteristics, safe conditions and traceability have driven researches for the development of technologies such as intelligent packaging, capable to fulfil those needs. Polydiacetylene (PDA) is a synthetic material that has been highlighted in research field as a sensor substance, which can be used to produce intelligent packaging capable to detect chemical or biochemical changes in foods and in their environment due to PDA’s color transition from blue to red. This work focused on the development and optimization of an intelligent packaging constituted of a polymeric matrix of cellulose acetate-based incorporated with PDA as the substance sensor. Cellulose acetate films (3% wt.) were developed by a casting method, and the amounts of triethyl citrate plasticizer (TEC) (0–25% wt. of cellulose-acetate) and PDA (0–60 mg) were analyzed to optimize the conditions for the best color transitioning at this study range. The compound amounts incorporated into polymeric matrices were established according to Central Composite Designs (CCD). Three more design variables were analyzed, such as the polymerization time of PDA under UV light exposition (0–60 min), pH values (4–11) and temperature exposure on the film (0–100 °C), important factors on the behavior of PDA’s color changing. In this study, film thickness and film color coordinates were measured in order to study the homogeneity and the color transitioning of PDA films under different pH and temperature conditions, with the purpose of maximizing the color changes through the optimization of PDA and TEC concentrations into the cellulose acetate matrix and the polymerization degree trigged by UV light irradiation. The optimal film conditions were obtained by adding 50.48 g of PDA and 10% of TEC, polymerization time of 18 min under UV light, at 100 °C ± 2 °C of temperature exposure. The changes in pH alone did not statistically influence the color coordinates measured at the analyzed ratio; however, variations in pH associated with other factors had a significant effect on visual color changes, and observations were described. PDA films were optimized to maximize color change in order to obtain a cheap and simple technology to produce intelligent packaging capable to monitor food products along the distribution chain in real time, improving the food quality control and consumer safety. View Full-Text
Keywords: polydiacetylene; smart packaging; quality food; safety food; sensor polydiacetylene; smart packaging; quality food; safety food; sensor
►▼ Show Figures 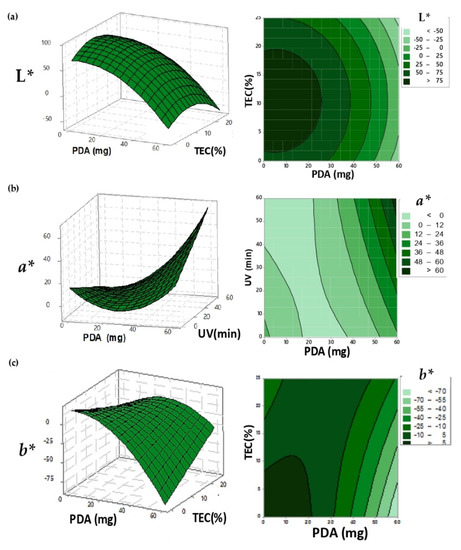 Ardila-Diaz, L.D.; Oliveira, T.V.; Soares, N.F.F. Development and Evaluation of the Chromatic Behavior of an Intelligent Packaging Material Based on Cellulose Acetate Incorporated with Polydiacetylene for an Efficient Packaging. Biosensors 2020, 10, 59.


Ardila-Diaz LD, Oliveira TV, Soares NFF. Development and Evaluation of the Chromatic Behavior of an Intelligent Packaging Material Based on Cellulose Acetate Incorporated with Polydiacetylene for an Efficient Packaging. Biosensors. 2020; 10(6):59.


Ardila-Diaz, Lina D.; Oliveira, Taíla V.; Soares, Nilda F.F. 2020. "Development and Evaluation of the Chromatic Behavior of an Intelligent Packaging Material Based on Cellulose Acetate Incorporated with Polydiacetylene for an Efficient Packaging." Biosensors 10, no. 6: 59.