Morphological Transformation of Silver Nanoparticles from Commercial Products: Modeling from Product Incorporation, Weathering through Use Scenarios, and Leaching into Wastewater

:
There is increasing interest in the environmental fate and effects of engineered nanomaterials due to their ubiquitous use in consumer products. In particular, given the mounting evidence that dramatic transformations can occur to a nanomaterial throughout its product lifecycle, the appropriateness of using pristine nanomaterials in environmental testing is being questioned. Using a combination of transmission electron microscopy (TEM), energy dispersive X-ray spectroscopy (EDS), X-ray photoelectron spectroscopy (XPS), and inductively coupled plasma-mass spectrometry (ICP-MS), this work examines the morphological and compositional effects of conditions mimicking a typical lifecycle of a nano-enabled product, from the production of the silver nanoparticle (AgNP)-laden textiles, through its use, laundering, and then finally, its leaching and incubation in the wastewater collection system. These simulated weathering conditions showed evidence for the transformation of AgNPs into AgCl and Ag2S. Incubation in raw wastewater had the most dramatic effect on the AgNPs in terms of transformation, no matter what initial weathering was applied to the NPs prior to incubation. However, despite extensive transformation noted, AgNPs were still present within all the samples after the use scenarios.
Keywords:
nanoparticle; Silver (Ag); life cycle; TEM; EDS; ICP-MS; XPS

The unique properties of nanoparticles (NPs) make them attractive additives in a variety of commercial products. With the heightened interest in this area of research has come a plethora of novel nanomaterials of varying composition and morphology, many with attractive possible applications [1,2]. Of the over 1600 products claiming to contain nanomaterials, 383 of them explicitly declare the incorporation of silver [3]. Although AgNPs are applied to many different commercial products worldwide, the majority of them are used in textiles for antimicrobial purposes [4,5,6,7]. The ubiquity of AgNP-laden products in the marketplace sparks the question of the eventual environmental fate and effects of these materials.
Studies on the environmental impact of nanoparticles are typically carried out using the material in pristine form and vary widely in size (10–50 nm) and coatings depending on the availability and ease of synthesis of the nanoparticles [8,9,10,11,12,13,14]. Numerous studies have established the potential ecotoxicological effects of AgNPs. They inhibit the photosynthesis of algae, increase the mortality rate of aquatic zebrafish embryos, and disrupt microbial colonies in soil [14,15,16,17,18,19,20,21]. While an understanding of the potential impact of pristine nanoparticles on the environment is essential, particularly in simulating accidental spill scenarios, these results might not be universally applicable to all exposure situations, given the transformations that NPs could undergo throughout their life cycle [22]. Transformations can include the agglomeration or aggregation of the nanoparticle or a chemical/surface transformation triggered by exposure to other agents within the product or exposed to the product. Although often used interchangeably, aggregation is defined as the loose assembly of particles and agglomeration is the more permanent assembly of the particles into tight clusters causing partial fusion [23]. Several studies have already established that transformations to AgCl or Ag2S are possible for AgNPs [24]. This transformation has been previously described as oxidative dissolution by chlorine and sulfidation, respectively [25,26]. However, the presence of chloride, nitrate, selenide, and sulfide have also been known to lead to AgNPs transformations [27,28,29]. Indeed, analyzing transformed NPs and subsequent byproducts released from the use of products containing NPs will inform environmental fate and toxicological studies, as well as risk assessment initiatives [30].
With regards to Ag, studies have shown that AgNPs are released from AgNP-laden fabric using only water washes [31,32]. Treatments with sweat and detergent have also been shown to trigger the release of NPs [33,34,35]. The composition, pH, and ionic strength of these solutions will contribute to the variability in the form of Ag extracted [24]. As the fabrics are exposed to these conditions (e.g., washing, sweat.), the potential is high that the leachates from the consumer product, containing transformed AgNPs, will eventually end up in the wastewater treatment process [36]. However, even before reaching the wastewater treatment facility, incubation in the wastewater collection system could further transform the nanomaterials. Pristine nanoparticles are known to disrupt microbial colonies, biofilms, and alter the chemical properties of the wastewater, hindering the effectiveness of the wastewater treatment [37,38,39]. Further transformation of these AgNPs can be expected through the wastewater treatment, as well as during environmental weathering [40,41,42]. Finally, sludge from wastewater is treated for use in agricultural applications [43]. The transformation of AgNPs to Ag2S when added directly to the sludge, had been reported [44]. Ag2S nanoparticles of 5 to 10 nm have also been independently detected in sewage sludge [45].
A clearer understanding of the physical and chemical changes that take place throughout the lifecycle of a nano-enabled product would help inform toxicological studies and improve our risk assessment for nanomaterials. In this paper, the morphology and composition of AgNPs, when embedded into fabric, are compared following a variety of treatments meant to mimic several stages in the lifecycle of the nanomaterial, from initial product incorporation to use and washing, to right before the wastewater treatment process (Figure 1).

Kier boiling of the commercial socks was employed to remove the wax finishing and non-cellulosic materials on the cotton fibers [46]. In brief, 14.7 g of Na2CO3 and 33.3 grams of NaOH were added to 1 L of ddH2O in a 2 L round bottom flask. A pair of white Hanes socks was added to the solution and refluxed for 10 h. The solution turned yellow when boiling and eventually turned brown, indicating the removal of waxy and non-cellulosic material [46]. The socks were then rinsed five times in a 20% bleach solution and left to air dry.

Raw wastewater was characterized (see Supporting Information, Table S1) and used the very same day unless indicated. Five microliters of the pristine NPs solution (5 mg/mL) was added to 2 mL of raw wastewater. The leachate from the bleach, detergent, and sweat solutions was each mixed separately with wastewater at a 1:1 ratio to make up a 2 mL solution. The mixtures were then vortexed on a Vortex-Genie 2, (Scientific Industries Inc., Bohemia, NY, USA) for 10 minutes, and then left for 24 h at 21 °C before the TEM grids were prepared.
A 15 mg/L aqueous solution of 1,6-hexanedithiol and a 5 mg/L aqueous solution of ammonium hydroxide were also used as model sulfur-rich and nitrogen-rich solutions, respectively. Pristine NPs and leachate from the bleach, detergent, and sweat solutions were directly added to the sulfur or nitrogen solutions, vortexed for 10 min and left for 24 h at 21 °C.

A small pre-weighed piece of the sock (~100 mg) was placed in a 10 ml Pyrex beaker and placed into a TEMCO 1520 benchtop muffle furnace. The furnace was heated to 600 °C and left for 3 h or until the sample turned to white ash. The sample was let to cool to room temperature before removing from the furnace [34]. The ash was then dissolved in 100 µL HNO3 and diluted 10X with ddH2O.

A small pre-weighed piece of the sock (~100 mg) was submerged in 1:1 ratio of HNO3 and H2O. The solution was heated to 100 °C, and more HNO3 was added slowly until most of the sock dissolved. The solution was allowed to cool, and 30% H2O2 was added until the bubbling stopped [31]. The sample was diluted 10× with ddH2O before analysis.

ICP-MS was performed on an Agilent 8800QQQ (Agilent, Santa Clara, CA, USA) or an Agilent 7700x ICP-MS (Agilent, Santa Clara, CA, USA) (the latter used only to determine the best extraction method). The ICP-MS samples for the socks were prepared by dissolving the ash after incineration in 1 mL HNO3 and diluting that in 9 mL ddH2O. The solutions from the extractions from Section 2.5, leachates, and wastewater incubations were used as-is. Appropriate dilutions were made to ensure the Ag concentration was within the calibration curve, and the results were normalized to compare the extraction methods.
The TEM images were taken using FEI Tecnai G2 TEM (Thermo Fisher Scientific, Waltham, MA, USA) at 200 kV. Samples were first prepared the same way as for the ICP-MS. The solutions were then vortexed for two minutes, and thereafter, 6 µL of sample was placed on the grid and left for a minute. Residual liquid was removed using a pipette, and another 6 µL of sample was added. The residual sample was removed for the second time, and the grid was left to air dry for 2 h. The CF300-Cu grid was used.
The EDS of the sample was taken through an attachment to the TEM, Aztec EDS from Oxford X-ray detection systems (Oxford Instruments, Tubney Woods, Abingdon, UK). The beam was made to top focus directly on the nanoparticle.
The XPS were taken using Kratos analytical model Axis Ultra DLD using AlKα radiation, charge neutralizer, and a delay-line detector (DLD) (Kratos Analytical Ltd, Wharfside, Manchester, UK). The samples used for XPS were all in the liquid form wherein 10 µL of the sample was applied onto a glass coverslip. The sample was left to air dry for 2 h. Once dried, another 10 µL of sample was applied to the exact same spot and again left to air dry for 2 h. This step was repeated 10 times or more until a visible spot was observed on the glass coverslip.

This research was funding by an Environment and Climate Change Canada (ECCC) Grants and Contribution Agreement and by the Natural Sciences and Engineering Research Council of Canada (NSERC).

M.C.D. and B.O. acknowledge Environment and Climate Change Canada for a Grants and Contributions Agreement to support this research. This work would not be possible without the technical help of Jianqun Wang, the TEM and SEM facility manager in obtaining TEM images and troubleshooting the instrument. We would like to thank Nimal DeSilva for his assistance in ICP-MS analysis of our sample. 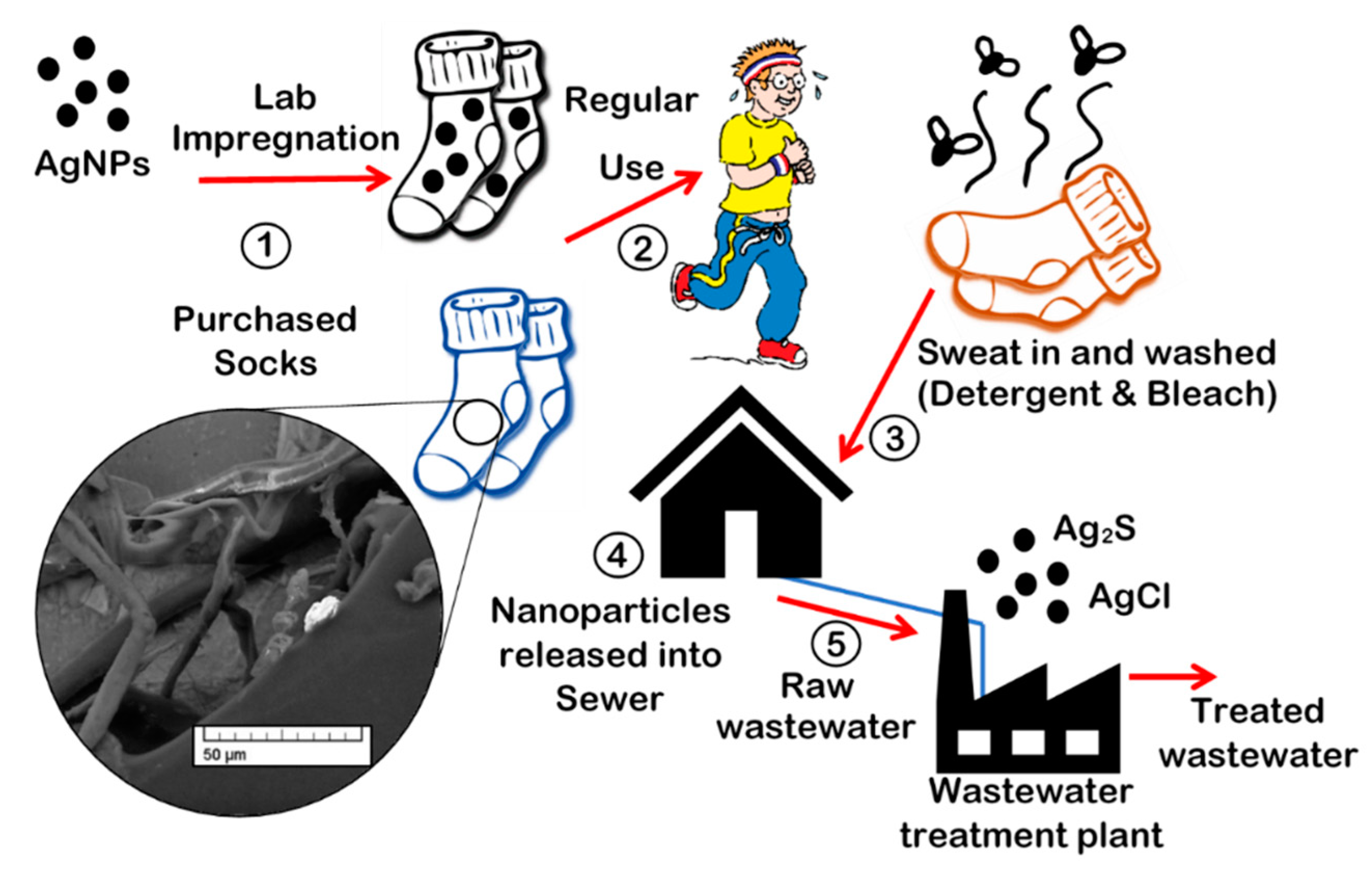 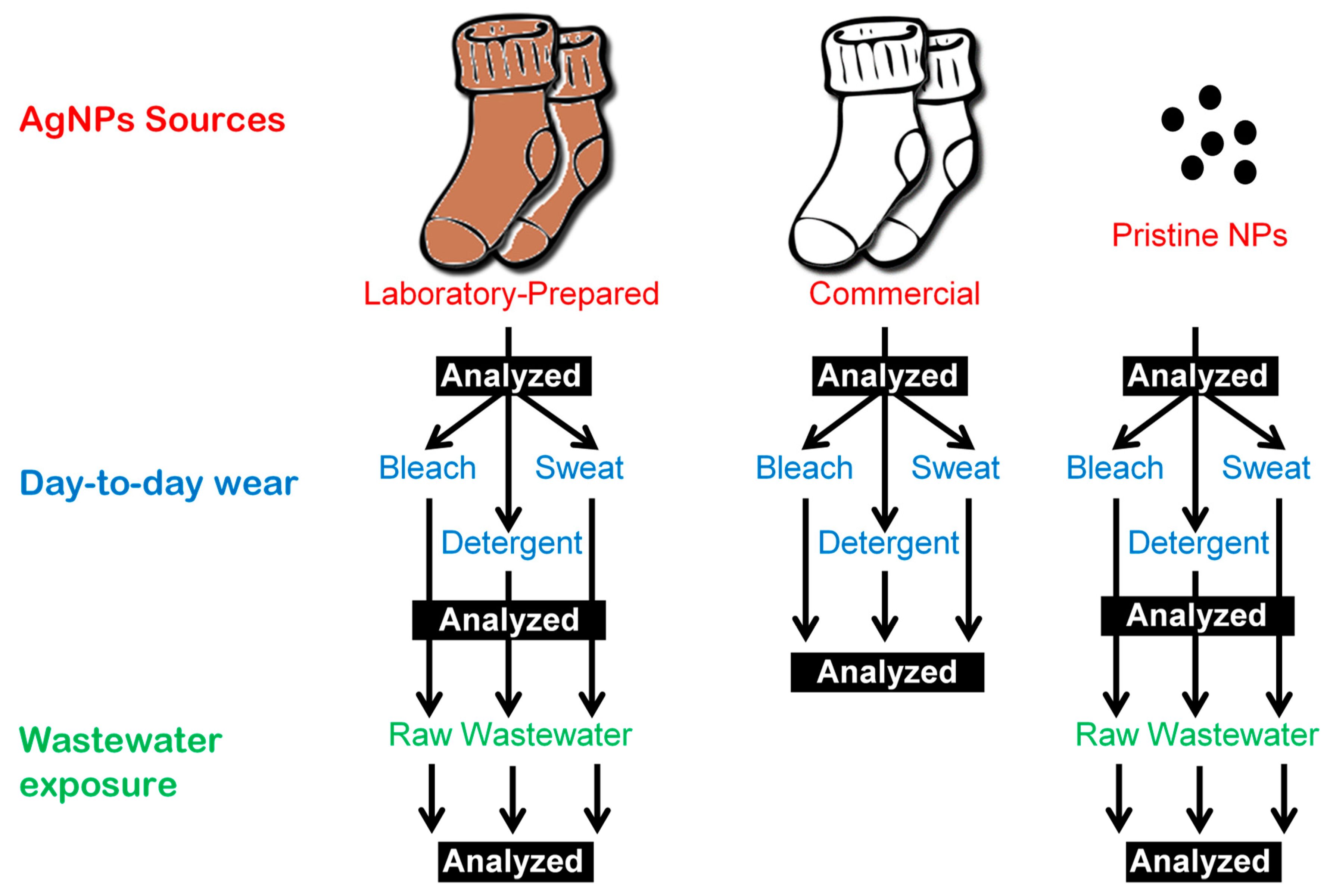 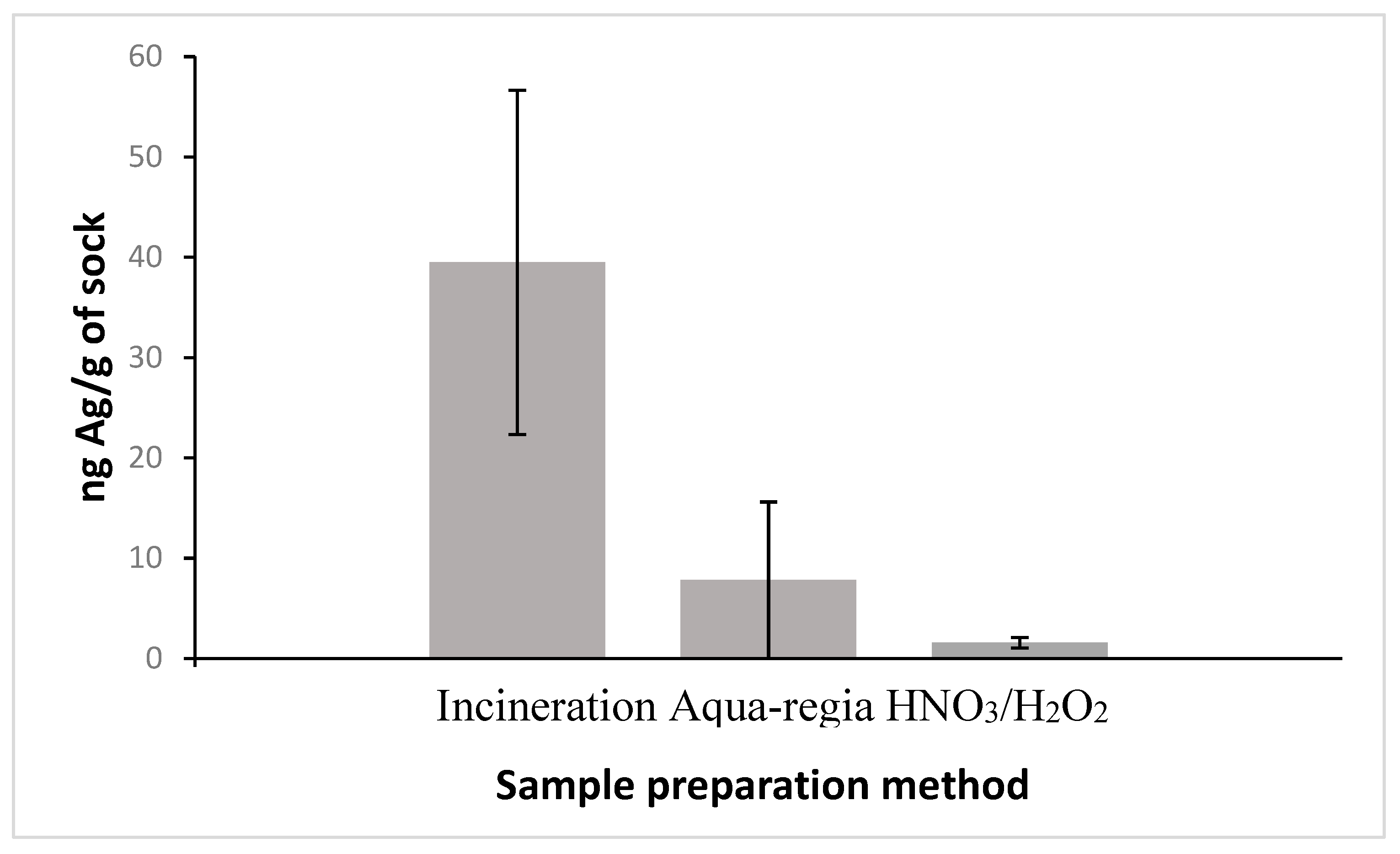 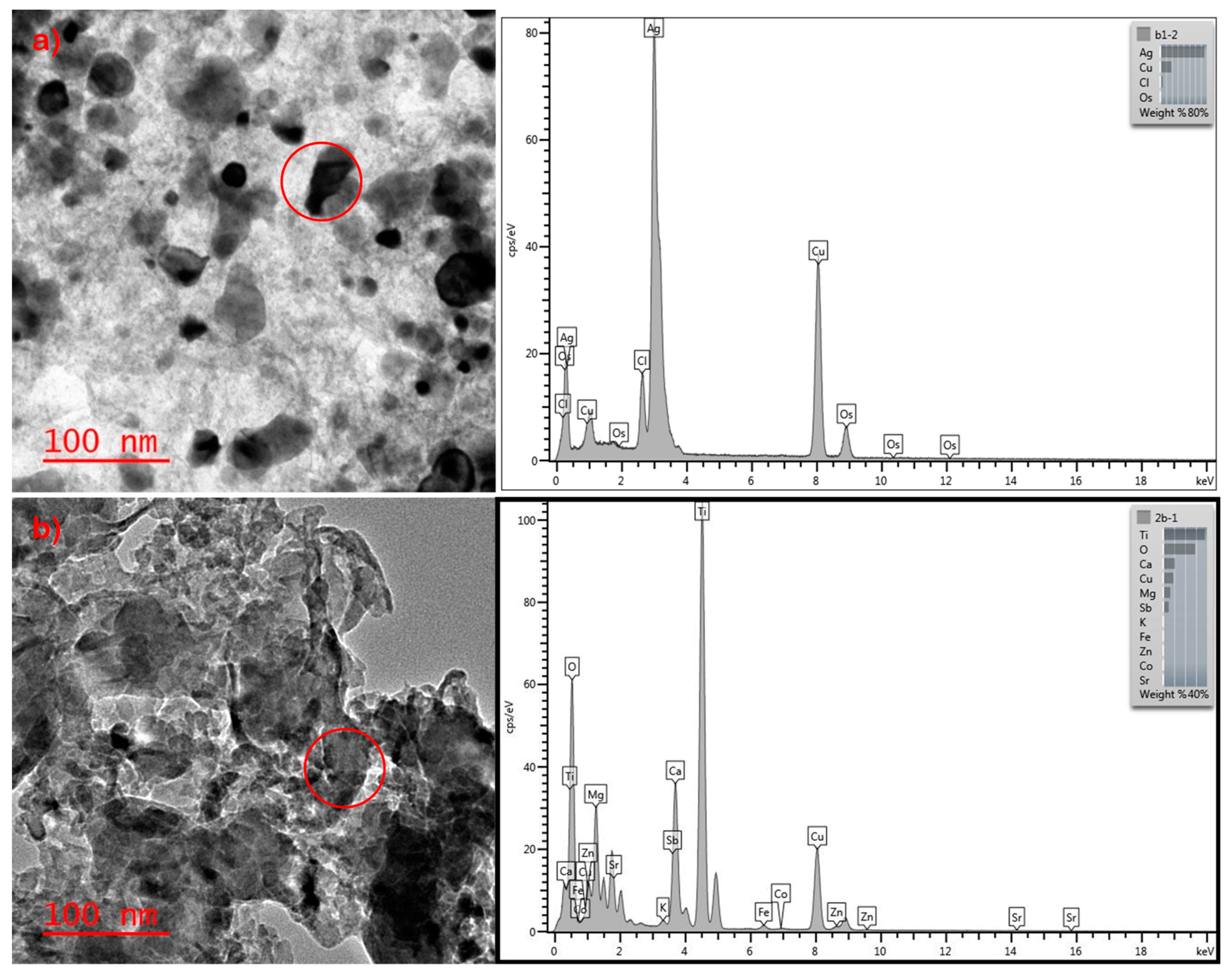 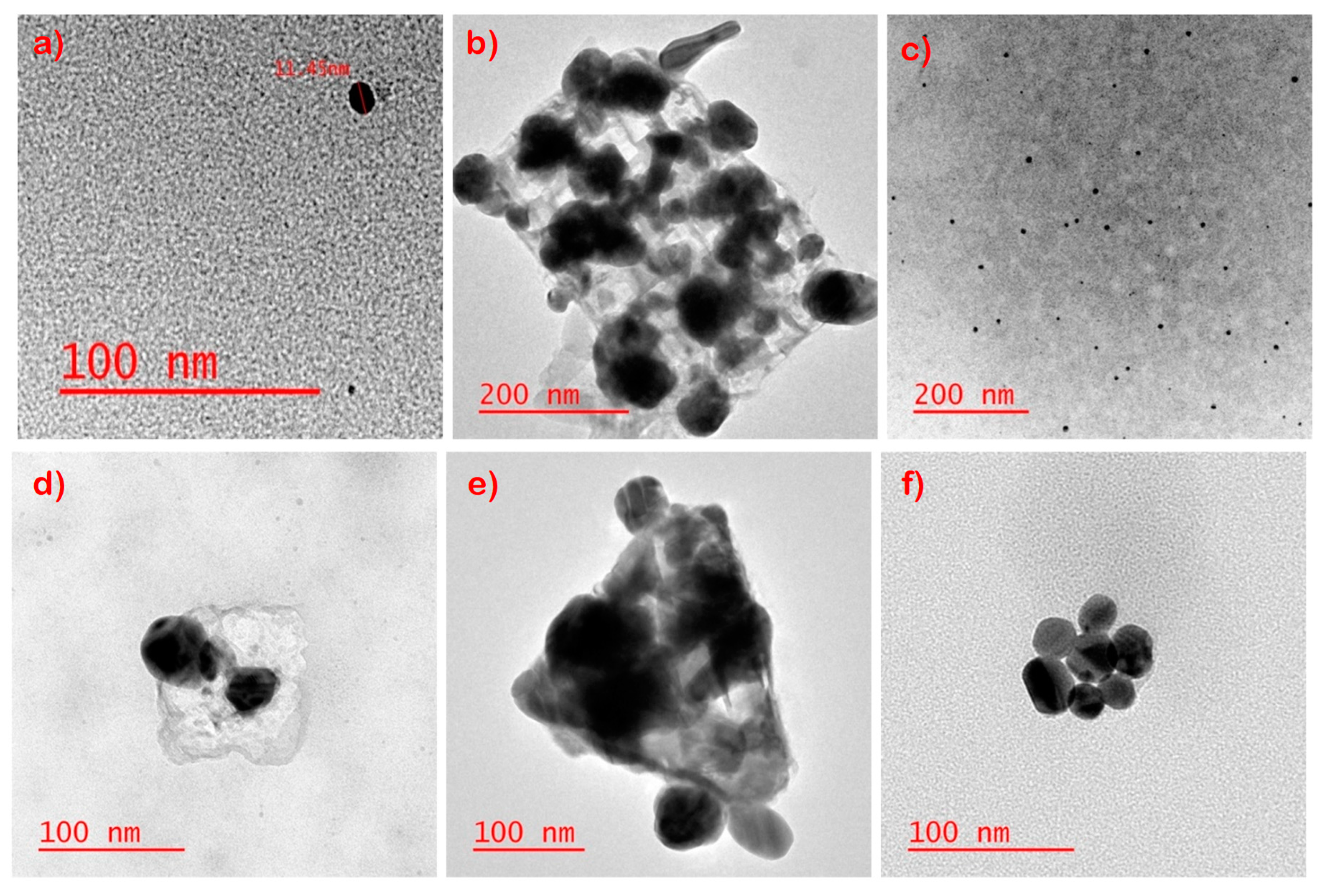 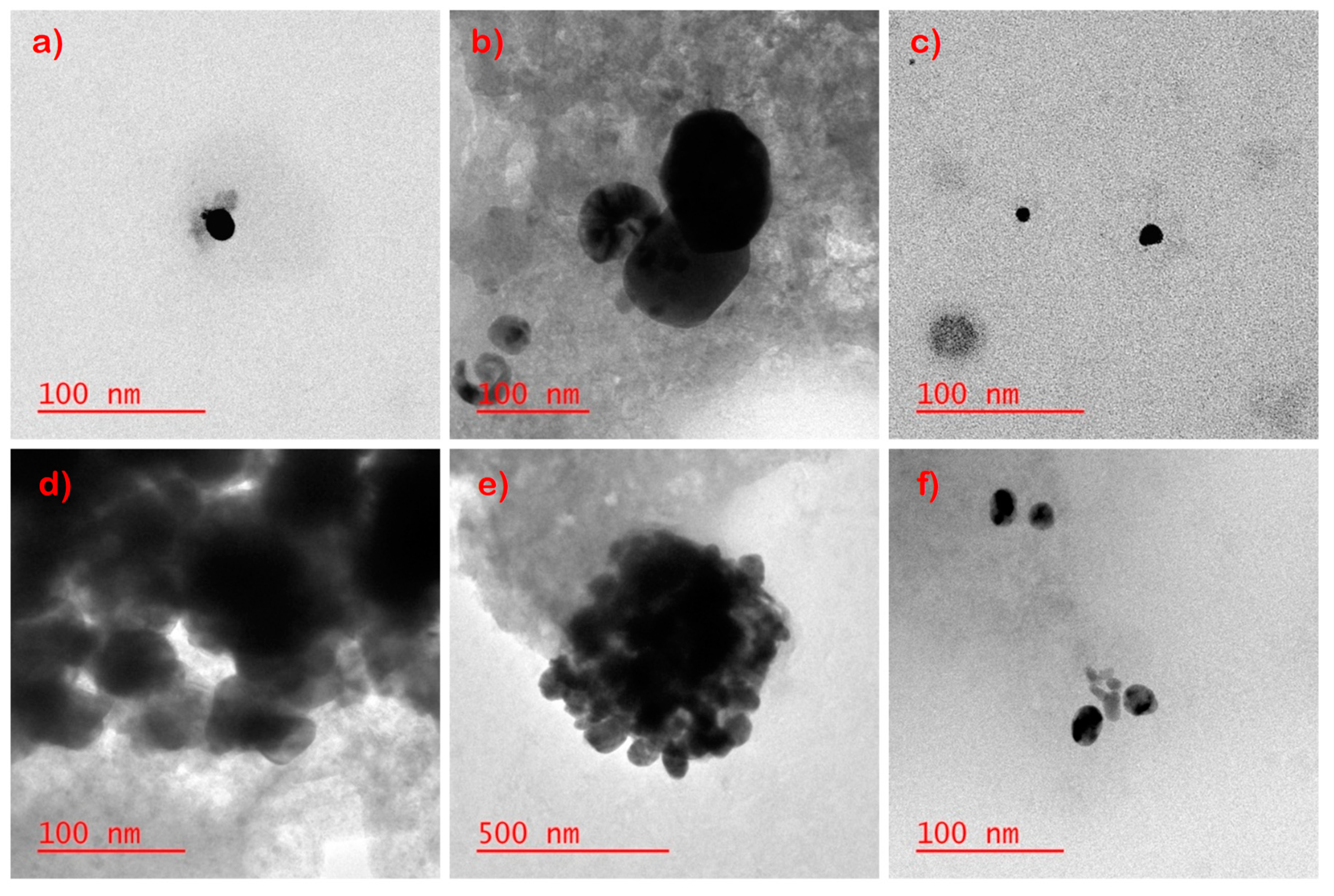 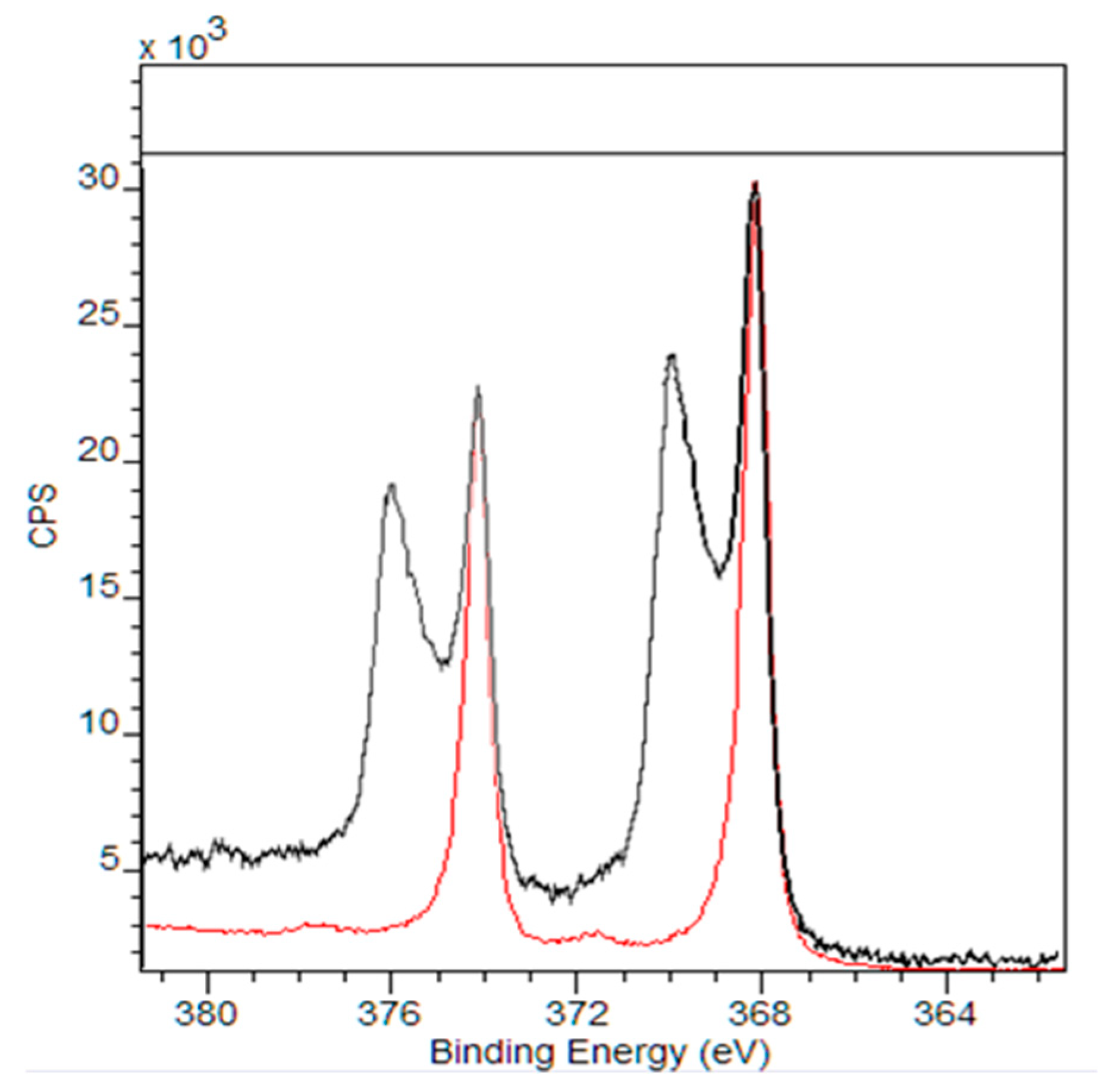