Second harmonic generation (SHG) is forbidden from most bulk metals because metals are characterized by centrosymmetric symmetry. Adsorption or desorption of molecules at the metal interface can break the symmetry and lead to SHG responses. Yet, the response is relatively low, and minute changes occurring at the interface, especially at solid/liquid interfaces, like in battery electrodes are difficult to assess. Herein, we use a plasmonic structure milled in a gold electrode to increase the overall SHG signal from the interface and gain information about small changes occurring at the interface. Using a specific homebuilt cell, we monitor changes at the liquid/electrode interface. Specifically, traces of water in dimethoxyethane (DME) have been detected following changes in the SHG responses from the plasmonic structures. We propose that by plasmonic structures this technique can be used for assessing minute changes occurring at solid/liquid interfaces such as battery electrodes.
Keywords: second harmonic generation (SHG); plasmonic enhancement; second-order nonlinear susceptibility; battery second harmonic generation (SHG); plasmonic enhancement; second-order nonlinear susceptibility; battery

Figure 2 shows the SHG scanning of a hexagonal triangular plasmonic array milled in Au, covered with 5 mm (or 0.5 mL) of DME solution (see Figure 1). The relatively high SHG response with respect to the surface originates from the plasmonic structure and it is at least 3 times higher compared to a smooth Au film. Additionally, one can notice that the SHG response from the plasmonic structure is drawn inwards towards the centre and decays towards the edges. This is due to plasmonic coupling between the triangular holes which are 400 nm apart from each other, in agreement with previously reported studies [28]. At about one micron from the plasmonic structure the signal has decayed completely and becomes very low arising only from the Au surface and its interaction with DME molecules (see Figures S3 and S4).
Next, we compared the SHG responses of the cell with dry DME to that of the cell after a short time exposure to ambient conditions, allowing absorption of ppm amounts of water as assessed by Karl Fischer measurements. A histogram of the average responses per micron square is shown in Figure 2b. About 50% change in the SHG intensity from the plasmonic structure before and after exposure is observed, unlike the case of the non-structured gold film, in which differences in the SHG responses are within the standard deviation. Those measurements have been repeated several times also with a larger amount of water to assure the directionality of the polarizability change (see Figures S3 and S4).
The relatively large difference of SHG responses emphasizes the sensitivity of the method being presented here.
To ensure that indeed SHG was being collected rather than other fluorescent effects or fundamental light, a spectrum was collected showing the frequency doubling at the appropriate wavelength (Figure 2c). Residues of two-photon fluorescence and fundamental light can be observed at 650 nm and 940 nm, respectively when two filters are removed before collecting the spectrum.
To be sure of the consistency and reliability of our system, we ran angle resolved SHG measurements (polar plots) at different locations on the plasmonic hole array. Those measurements have been repeated for several arrays and for each solvent environment. Figure 3b shows an average of several polar plots both in Cartesian coordinates with polarizations both parallel (red) and orthogonal (blue) to the symmetry axis displayed. Repeatability of the measurements is ensured even though the emitted photons are collected after scattering over a 5 mm long propagation through the solvent, as indicated by the error-bars. Small changes of about 20% in amplitude are observed. Yet repeated observation typical four-fold signature of octupolar patterns confirm the relevance of our configuration as a proof that the observed changes in the SHG intensities are generated at the interface and are not due to modifications within the bulk of the metallic structures. In addition, the plots are periodic with an angular period of 180° ending-up after a full revolution of the fundamental polarization at the same intensity started from, thus indicating the stability of our system (Figure S7). The dark noise is of the order of 150 cps. The minimum points of the polar plots are of that order, emphasizing the accuracy of the measurement. An elaborated figure with all measurements used for this average can be found in Figure S7. Here, only the average is shown, to simplify the figure.
The signal from the plasmonic structure is overwhelmed by that from the surface. So much so, that the signal at the minimum point of the polar plots is as low as the noise level (100 cps) and is lower than that of the bare surface, ~500 cps. In addition, no octupole polar plots are observed from the bare surface itself as expected.
The fact that our polar plots are highly reproducible through 5 mm of solvent encourages us to measure minute changes in the solution using this technique. It is well known that ambient conditions dramatically affect batteries performance. For example, the solubility of electrolytes in DME changes drastically when DME is properly dehydrated because there is a change in the caging of the salt by the DME molecules [50]. Furthermore, following adsorption of water, the solvent (DME in this case) undergoes reorganization, in the bulk as well as at the interface, with clusters formed by water molecules [52]. Figure 4a,b show polar plots obtained respectively from electrode/DME in a dry environment and from an environment. The polar plots were averaged and compared. In agreement with Figure 2b, the amplitude of the SH response after exposure to water is higher as a result of polarizability change at the interface. The SHG responses for metals are dependent on the electron density profile at the interface/surface, which scales nonlinearly with the number of electrons in the system. In this case, it means that the adsorbates which donate electrons to the metallic surface will give rise to enhanced SHG response, whereas molecules (adsorbates) which are withdrawing electrons will decrease the SHG responses.
Indeed, according to the work of Z. S. Nickolov et al., water and DME molecules form clusters. This cluster formation presumably gives rise to changes in the polarizability at the gold surface and thus in the SHG response of the studied plasmonic electrode. We shall note that the index of refraction of DME is 1.377 with slight changes to the third digit when changing the temperature, a similar refraction index to that of water [54]. That is, one can conclude that the changes in the responses of the plasmonic electrode are solely due to reorganization of the solvent at the interface, which results as different polarizability.
For example, it has recently been reported that second harmonic scattering (SHS) was reportedly used to measure the long-range organization of water molecules. Changes in this organization as a function of salt concentration were monitored and reported [55]. Three-dimensional imaging by SHG of water interfacial structure and dynamics in confined space has also recently been reported showing the strength and scope of this technique [56].

We report herein the use of plasmonic structures as an enhancement for surface chemistry sensing with SHG. Though the change is subtle and cannot be distinguished in the case of a flat surface, a plasmonic array is seen to boost the signal intensity, thus evidencing an interface signal that can be further singled out and analyzed by polarization-resolved acquisitions. Other plasmonic structures such as bow-ties and others which are known to highly boost the EM field can be used for such a study to increase the sensitivity [57,58]. We see it as an important step as the reorganization of the solvent at the interface should lead a different distribution of the electron-density profile at the surface, which in turn should affect the observed polar-plots. Changes in the polar plots following the reorganization of the solvent (DME) at the electrode/liquid interface have been observed by us, yet, the results are too preliminary to draw conclusions at this stage. We think that our proposed methodology is general and can be extended to the sensing of other subtle chemical changes occurring in closed cells, in-situ and possibly also under in-operando conditions through thick layers of liquid. This method could be used for analytical or even bioanalytical purposes [59].

This research was partly funded by The Ministry of National Infrastructure, Energy and Water resources fellowship for undergraduate to Ph.D. students in Energy fields, grant number 215-01-025. This work was partially supported by the ISF-NSFC grant no. 2525/17 and by ISF grant no. 2797/11.

We thank Joseph Zyss for the many fruitful discussions. We thank Doron Aurbach’s group from BIU’s Department of Chemistry for the use of their instrumentation and materials. 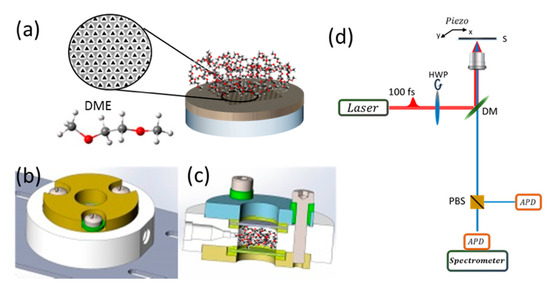 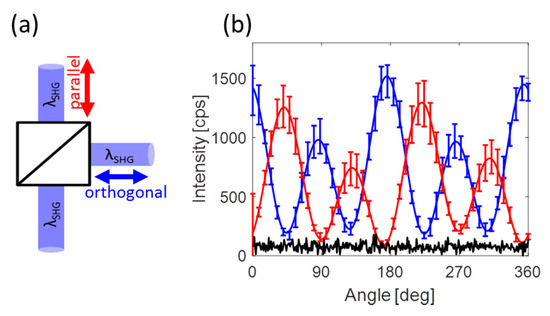 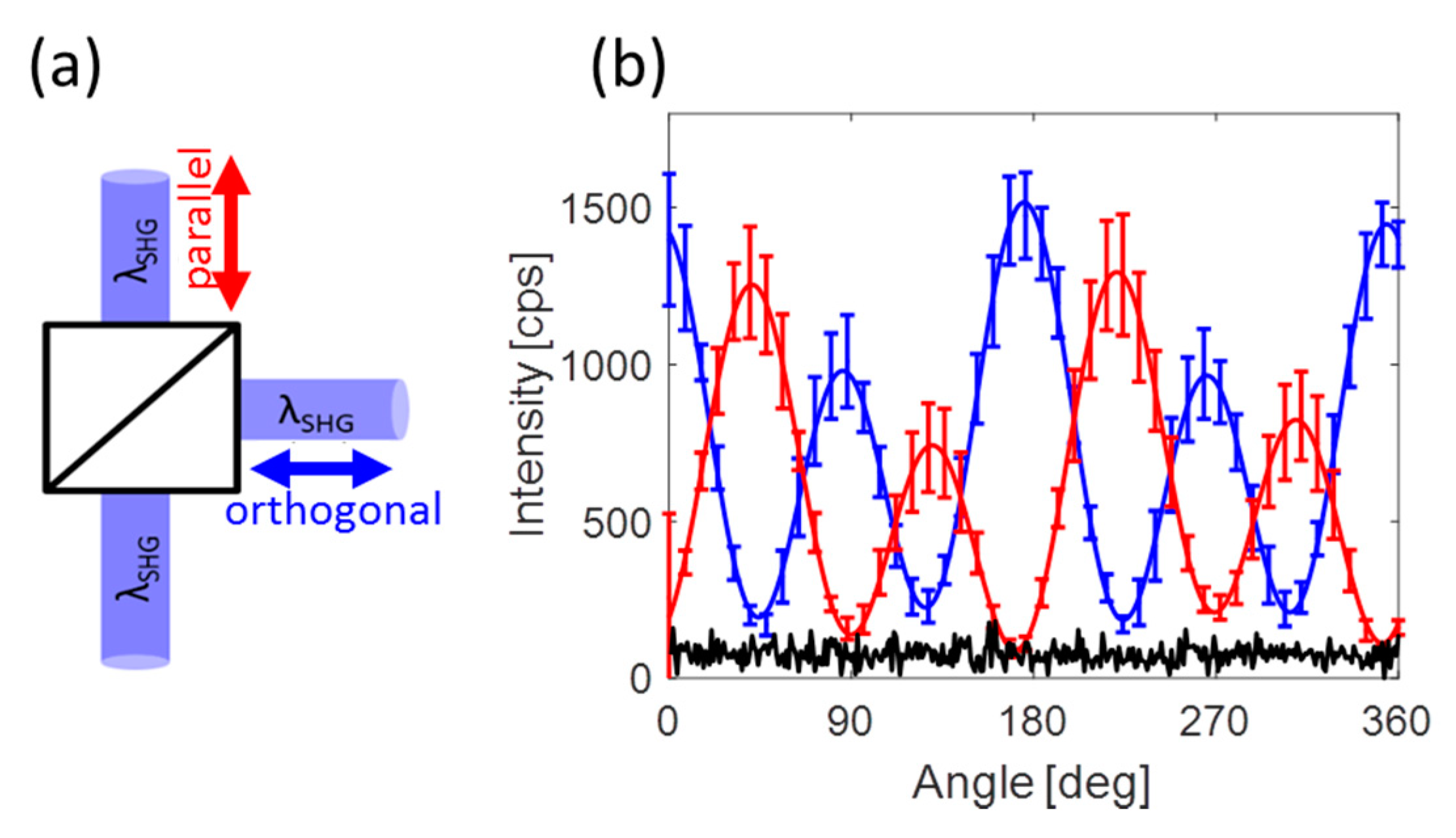