The framework of this work was to develop an emulsion-based edible film based on a chitosan nanoparticle matrix with cellulose nanocrystals (CNCs) as a stabilizer and reinforcement filler. The chitosan nanoparticles were synthesized based on ionic cross-linking with sodium tripolyphosphate and glycerol as a plasticizer. The emulsified film was prepared through a combination system of Pickering emulsification and water evaporation. The oil-in-water emulsion was prepared by dispersing beeswax into an aqueous colloidal suspension of chitosan nanoparticles using high-speed homogenizer at room temperature. Various properties were characterized, including surface morphology, stability, water vapor barrier, mechanical properties, compatibility, and thermal behaviour. Experimental results established that CNCs and glycerol improve the homogeneity and stability of the beeswax dispersed droplets in the emulsion system which promotes the water-resistant properties but deteriorates the film strength at the same time. When incorporating 2.5% w/w CNCs, the tensile strength of the composite film reached the maximum value, 74.9 MPa, which was 32.5% higher than that of the pure chitosan film, while the optimum one was at 62.5 MPa, and was obtained by the addition of 25% w/w beeswax. All film characterizations demonstrated that the interaction between CNCs and chitosan molecules improved their physical and thermal properties. View Full-Text
Keywords: chitosan nanoparticles; Pickering emulsion; stability; water vapor resistant; mechanical strength chitosan nanoparticles; Pickering emulsion; stability; water vapor resistant; mechanical strength
►▼ Show Figures 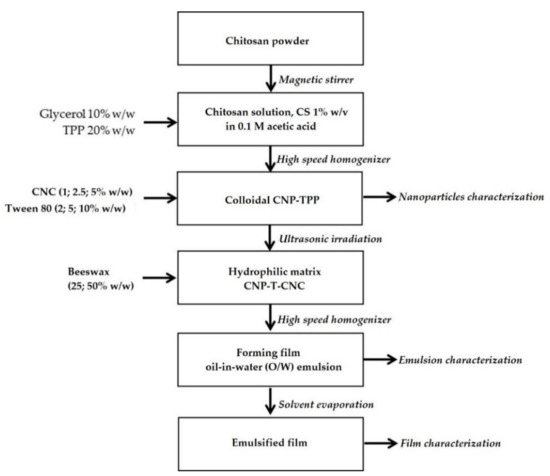