In this paper, an MD model is used to study the influence of nanoscale textured surfaces on the friction behaviors of the sliding contacts. As shown in Figure 1, the MD model consists of a rigid cylindrical tip and an elastic substrate. The simulation parameters are shown in Table 1. The material of the tip and substrate is single crystal copper. The tip consists of 5504 atoms and its radius is R = 2.169 nm. The dimension of the substrate is 21.69 nm × 5.784 nm × 7.23 nm, in x, y and z directions, respectively, and there are 78,720 atoms. The number of atoms in the substrate will be varied slightly because of different textures. All simulations are performed using Large-Scale Atomic/Molecular Massively Parallel Simulator (LAMMPS) [33] and OVITO is used to visualize the results [34].
There is no thermal motion of the atoms in the cylindrical tip, and the tip can be regarded as a rigid one. Periodic boundary conditions are applied in x and y directions to reduce the size effects and CPU cost. Non-periodic boundary is used in z direction. The substrate is composed of three parts: boundary atoms, thermostat atoms and Newtonian atoms. The boundary atoms are fixed [35]. Atomic motion occurs in the thermostat and Newtonian atoms, and these two parts obey the classical second Newton’s law, which are integrated using the Velocity–Verlet algorithm [36] with a time step of 0.01 ps. NVE ensemble is used in the simulation, and the thermostat atoms are set to ensure reasonable outward heat conduction using the direct velocity scaling method. Initially, velocities of atoms, except fixed boundary ones, are set randomly under an equivalent temperature T = 300 K. The simulation process is divided into three phases: relaxation, loading and sliding. Before loading, the system is relaxed to reach its minimum energy configuration. Then, the tip is pressed to the substrate to apply the load, and the tip slides along x direction after loading.
An embedded-atom method (EAM) potential is employed to describe interactions between all the atoms, and the total energy, Utot, is given by: where the energy Ui of an atom i is given by: where Fi is the embedding energy of atom i, ρi is the electron density at site i induced by all other atoms in the model, and ϕij is a pair potential interaction between atoms i and j.
The force of atom i in x, y and z directions can be obtained as,
Given the initial coordinates, velocities, and accelerations of all the atoms at time t, these parameters can be calculated by Velocity–Verlet algorithm [36] at time t + Δt, where Δt is time step, r is coordinate vector, v is velocity vector, a is acceleration vector, and m is mass of an atom.

3.1. The Influence of Textured Surface on Sliding Contacts

At the atomic scale, adhesion effects play important roles in the friction force, and the adhesion force depends on the contact area. Texture width affects the contact area between the tip and substrate, and further influences friction behaviors. Three textured surfaces with different widths are shown in Figure 4. The widths are w = 0.3615 nm, 0.723 nm and 1.0845 nm, and the corresponding texture densities are 20%, 40% and 60%, respectively. For the three textures, w + g = 1.8075 nm is a constant, and the texture depth is d = 0.723 nm.
Figure 5 shows the average friction forces of textured surfaces with different widths. With an increase in width, the average friction forces become higher, and the textured surface with the width w = 0.3615 nm has the lowest friction force in this work. In [19], the textured surface with smaller spacing has higher friction forces, similar to the bigger texture width, and both the smaller spacing and bigger texture width induce a higher texture density. The increase in texture width leads to an increase in contact area, which increases the adhesion component. Besides, the sliding process causes the fracture of the bonds, the transfer of abrasive particles and the generation of dislocations, and all these cause atom accumulation. Taking the case of w = 0.723 nm as an example, the atoms’ distribution during the sliding contact are shown in Figure 6. At the initial stage, there are some atoms filled into the spacings of the textures due to the scratch of the tip, and a few atoms are piled up in front of the tip, as shown in Figure 6a. As the sliding occurs, many atoms accumulate in front of the tip at the intermediate stage in Figure 6b. In the final stage, more atoms are piled up, and no textures are left in Figure 6c, as the spacings are filled by the accumulated atoms. As texture width increases, more abrasive particles are piled up in front of the tip, as shown in Figure 7, which induces a higher scratching depth and increases the ploughing component. The corresponding adhesion component and ploughing component are presented in Figure 8. The two components are increased with the increase in texture width. Compared with the smaller texture width, the ploughing component plays a more important role with a larger texture width. As a result, the increase of both adhesion and ploughing components results in a higher average friction force for a larger width.

In an ideal lattice, atoms are located strictly regularly and periodically. In an actual lattice, due to the formation conditions of crystals, the thermal movement of atoms, or other reasons, there are some defects in crystals, and the symmetry of the lattice is not perfect, which changes the mechanical properties of the material. Besides, the defects can be produced during the sliding process, and produce a noticeable contribution to the friction [27].
A nanoscale sliding contact model with subsurface defects is shown in Figure 16. Three nanoscale ball defects are modeled, and the depth of the defect is represented by the distance h between the center of ball defect and surface. Five different locations are used to study the effects of defect position on friction behaviors, and the depths are h = 0.90375 nm, 3.615 nm, 7.23 nm, 9.94125 nm, and 12.6525 nm. To accommodate the defects, the dimensions of the substrate are 21.69 nm × 5.784 nm × 14.46 nm in x, y and z directions, respectively. The distance between adjacent balls in x direction is 5.4225 nm, and the radius of the ball defect is r = 0.723 nm. In y direction, the ball defects are located in the center of the model.
The average friction forces for different depths of ball defects are shown in Figure 17. For cases of perfect substrate, or where the defects are closer to the surface of the substrate, the average friction forces are increased with the increase in the depth of the defects. In this work, when h = 3.615 nm, the average friction force is the highest. When the depth is greater than 3.615 nm, the average friction forces decrease with the increase in depth, and the average friction forces gradually approach that of the perfect substrate, which means that the effects of subsurface defects on friction become slight when the depth reaches a certain value.
Due to the existence of the ball defects, the surrounding atoms reach a new equilibrium state to produce the lattice distortion, which changes the material properties. In addition, compared with the perfect substrate, the defects make the sliding process unstable, and atoms near the defects of the substrate collapse during the sliding process. For the substrate contains defects, the common neighbor analysis shows that the dislocations are more than those of perfect substrate, as shown in Figure 18. With the increase in dislocation density, the shear strength of material increases, which increases the dissipation energy required to break the bond between atoms during the sliding process, and the friction forces are increased when h ≤ 3.615 nm.
In macro-contact mechanics, the stress distribution of two contact bodies showed that the maximum stress occurred at the subsurface. There was a similar phenomenon in nanoscale contacts, and the position of maximum stress showed a certain distance from the surface [45]. This distance depends on the radius of the contact body, the applied load and the material properties. If the defects are located near the position of the maximum stress, or they coincide with each other, the influence of the defects on the sliding process will be greater. On the other hand, if the defects are far away from the position of the maximum stress, the effects will be slight, and this could be the reason that the average friction forces become lower with the increase in depth of the defects, when h>3.615 nm.

Using an EAM potential, MD simulations have been carried out to study the effects of FCC copper textured surfaces with different depths, widths, orientations and shapes on friction behaviors during nanoscale sliding contacts. The influence of subsurface defects on the substrate is also discussed. Under the conditions and material used in this paper, some conclusions are drawn, as follows:

R.T. would like to thank the Top International University Visiting Program for Outstanding Young Scholars of Northwestern Polytechnical University. 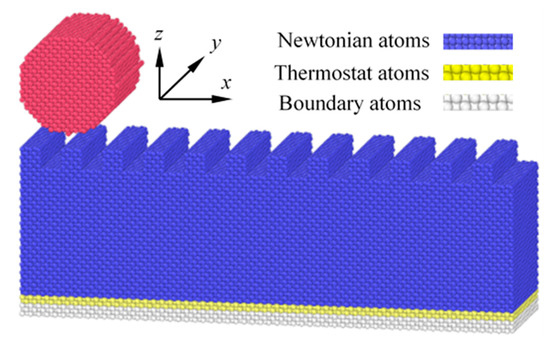 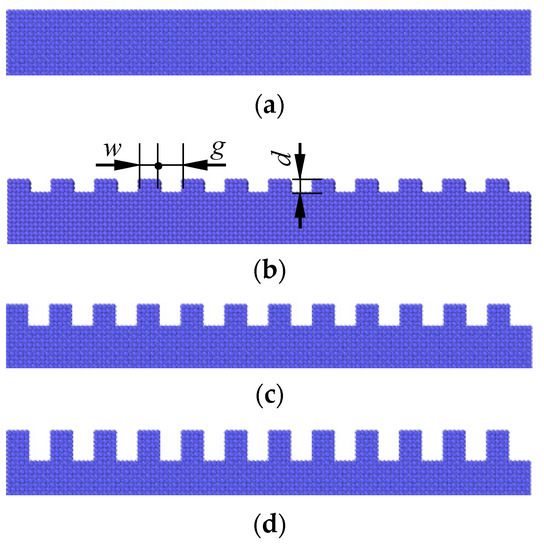 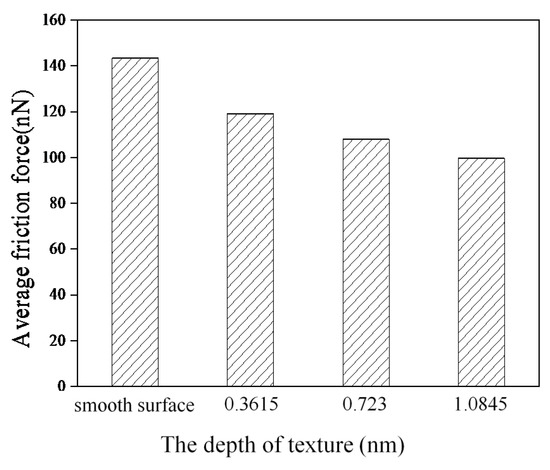 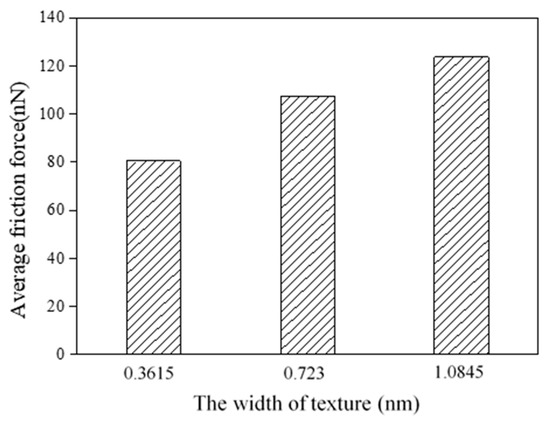 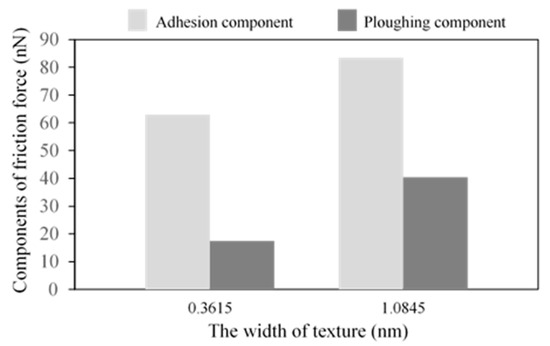 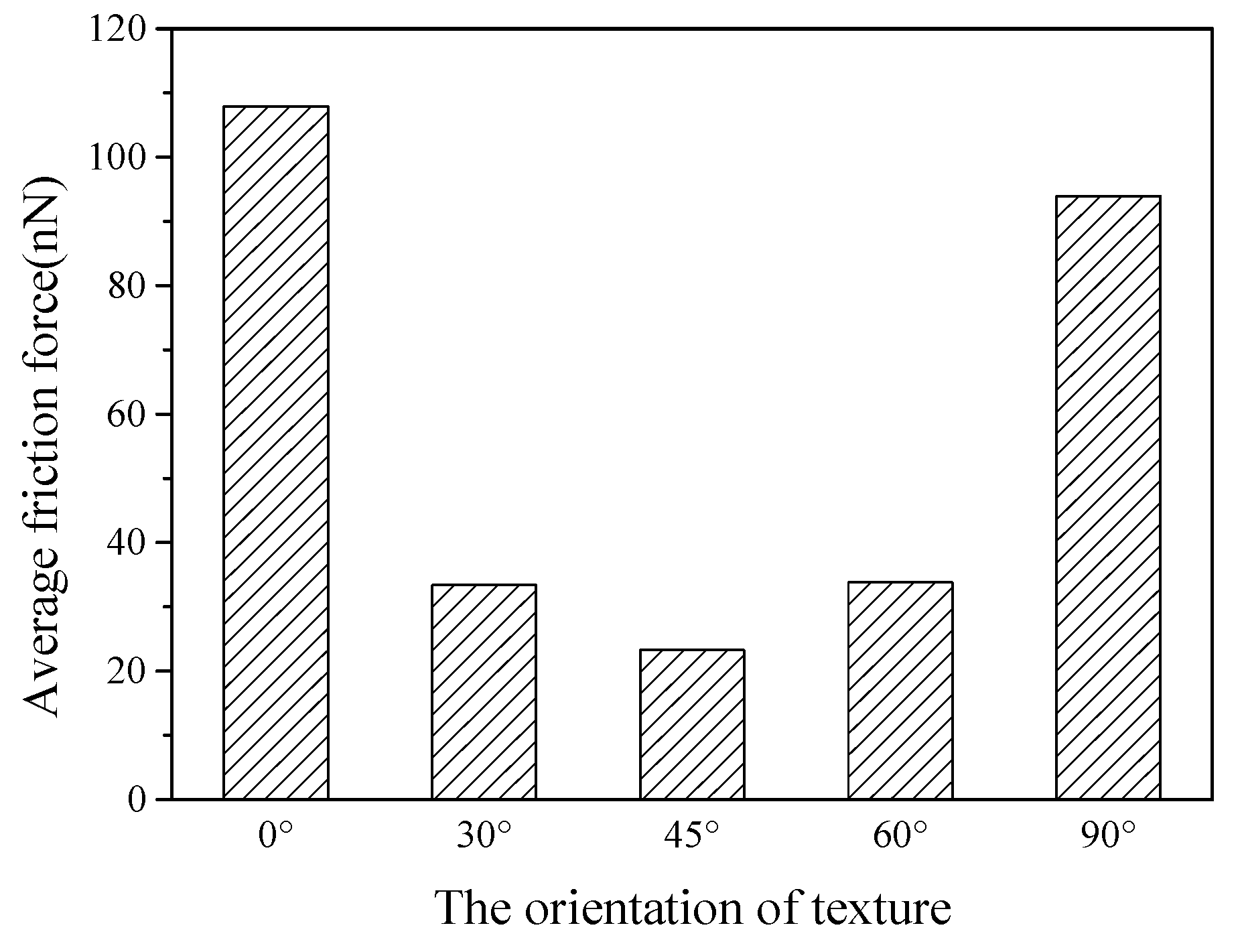 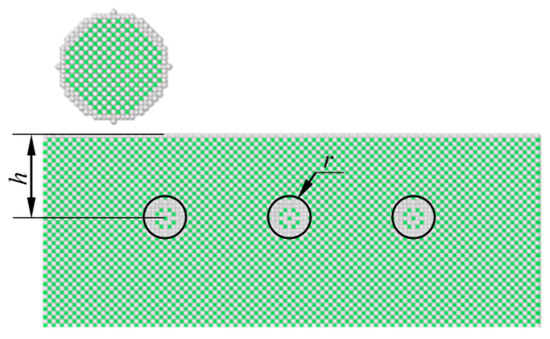 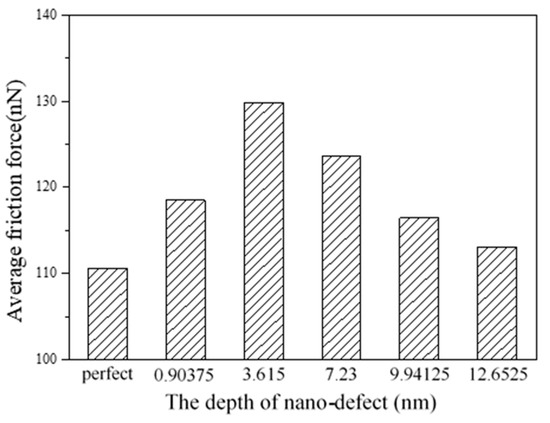 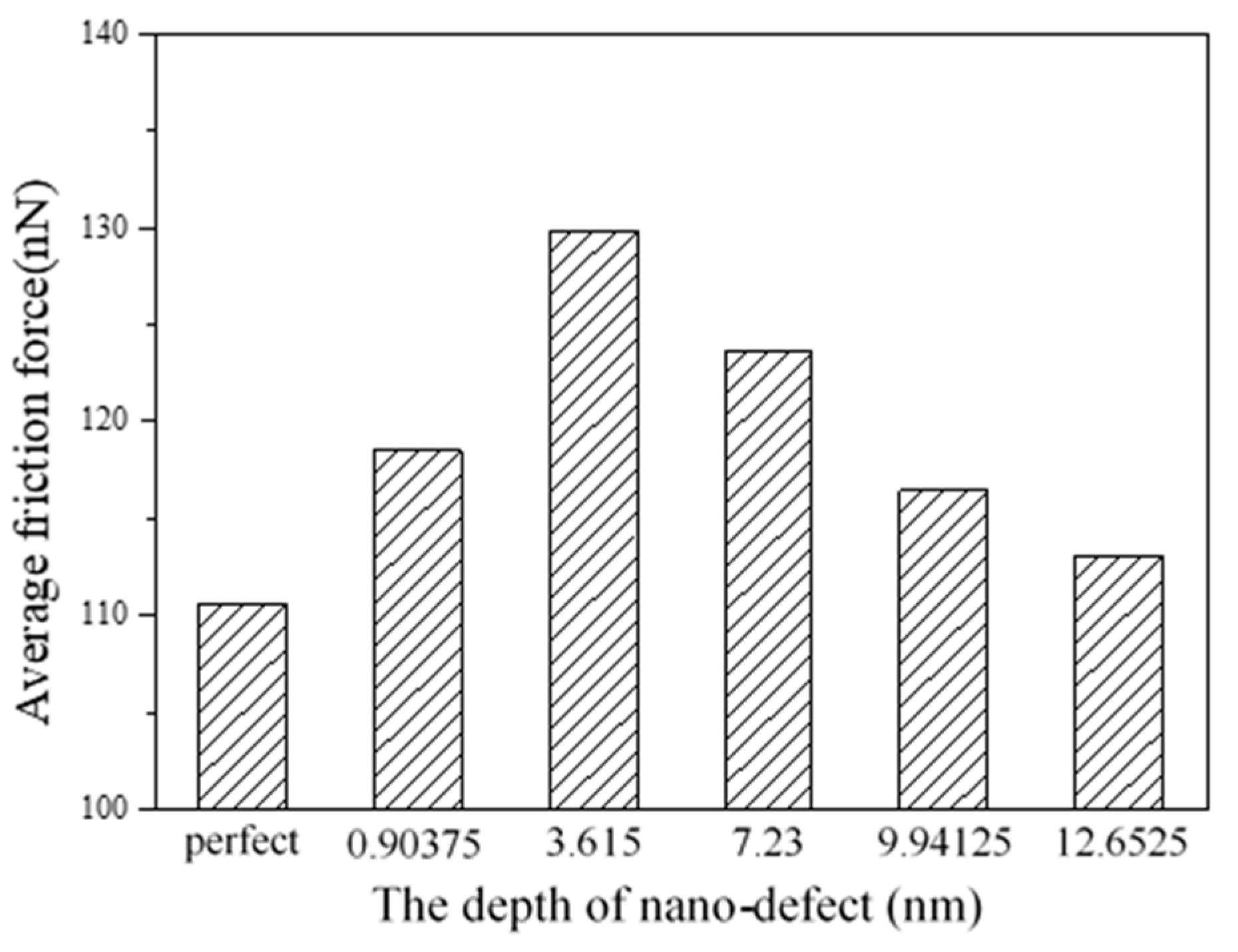 Table 1. Simulation parameters.
Table 1. Simulation parameters.
© 2019 by the authors. Licensee MDPI, Basel, Switzerland. This article is an open access article distributed under the terms and conditions of the Creative Commons Attribution (CC BY) license (http://creativecommons.org/licenses/by/4.0/).
We use cookies on our website to ensure you get the best experience. Read more about our cookies here.
Accept
We have just recently launched a new version of our website. Help us to further improve by taking part in this short 5 minute survey here. here.
Never show this again