:
A device that uses the electrowetting fluid manipulation technology to realize the reversible and dynamical modulation of the local surface plasmon resonance is invented. By varying the electrowetting voltage, the distribution of fluids media surrounding the grating structure get changed accordingly, causing the modulation of the plasmonic resonance peak. The simulation results indicated that three primary colors, that are cyan, magenta and yellow (CMY) can be respectively reflected through selecting suitable structural parameters. More importantly, for the first time, the invented fluid-based devices have exhibited fine-tuning characteristics for each primary color. Finally, the device has been proved to have a large color gamut range in the Commission International De L’E’clairage (CIE) 1931 color space.
Keywords:
electrowetting; tunable absorbers; subwavelength metal grating; plasmon resonance

Artificial micro-nano structures can produce various singular optical properties and phenomena not available in natural materials [1]. Photonics devices based on the artificial micro-nano structures have broad application prospects in many fields such as display [2], detection [3], imaging [4], remote sensing [5] and printing [6] because of the advantages such as designable optical properties, excellent process compatibility, and outstanding integration [7,8,9]. Benefits from the development of micromachining technology, that is the emergence of nanoprocessing methods, the feasible working band of photonic devices has extended from infrared to visible light, based on which new principles and new methods are expected to be developed for micro-nano characterization techniques and micro-nano photonic functional devices.
In recent decades, researchers have conducted extensive research on various types of micro-nano-structured photonic devices and have obtained many novel and important research results [10,11,12,13]. Color filter is one kind of common optical component that selectively reflects or transmits a specific wavelength in the visible light band and exhibits different colors. Color filters with red, green and blue primary colors are widely used in liquid crystal display, optical communication, sensor detection, imaging and a wide range of other fields [14,15]. The color filters based on periodic nanostructures have a small absorption rate of incident light, and meanwhile, the performance parameters of which, such as the central spectral position and bandwidth can be well adjusted by the structural parameters. Especially, the one based on the periodic grating structure can be easily fabricated by photolithography or nanoimprint process, which has not only low processing cost but also superior reflection and transmission properties, has attracted numerous interests [16,17,18,19,20,21,22]. Researchers found that the grating-based nanophotonic devices exhibit singular optical effects such as guided mode resonance and surface plasmon resonance. Furthermore, by adjusting the orientation, period, depth, etc. of the sub-wavelength grating, selective transmission (reflection/absorption) could be realized, and therefore it has attracted widespread attention in many applications [23,24]. However, it is also highly desired in some fields to make the working band of photonic device regulated dynamically and reversibly. Therefore, solid-based photonic devices with invariable structural parameters exhibit severe limitations. In recent years, researchers have made great efforts to develop adjustable plasmonic devices. An effective method is to exploit the remarkable properties of plasmons—high sensitivity to surrounding dielectric materials of plasmonic nanostructures [25,26,27]. For example, Wang and Chumanov have demonstrated electrochemical modulation of the LSPR intensity and frequency in Ag nanoparticles by coating with a tungsten oxide gel [28]. Zheng et al. applied a bistable, redox-controllable rotaxane molecule to a gold nanodisk array to achieve active adjustment of plasmon resonance by chemical conversion between its oxidized and reduced states. [29].
In this paper, we present an adjustable filter based on a grating structure by creatively adopting an advanced electrowetting fluid-manipulation technology in a double-layer metal–fluid–dielectric configuration. By changing the period of the grating, we have achieved the reflection of CMY (cyan, magenta, yellow) primary colors. Furthermore, the tinge of each primary color is dynamically and reversibly regulated for the first time by simply varying the electrowetting voltage applied to change the distribution of the fluids. And due to the fast speed of electrowetting regulation, the response time of the device is around 10 ms, which is more responsive and superior than many other methods. Furthermore, the benefits also include reversible regulation, miniaturization, and so forth. This tunable filter allows for a variety of tinge choices for each kind of colors, extends the color field of the display device without the demand of increasing the number of components. In addition, our fluid-based design is reusable and flexible, compared to the solid-based devices.

Figure 1a,b shows the principle of the adopted advanced fluid manipulation technique, which is generally named as electrowetting. Electrowetting technique is used in our research to achieve contact angle modulation. The contact angle of the conducting fluid on the solid surface is determined by the force balance at the contact point. The initial equilibrium contact angle, as shown in Figure 1a, , is given by Young’s equation:
Here is the surface energy per unit area between the solid surface and conducting fluid, is the surface energy per unit area between the solid surface and insulating fluid, and is the surface tension at the interface between the two fluids.
In electrowetting devices, a voltage is usually applied between the conducting fluid and the driving electrode. In many applications, a thin hydrophobic dielectric layer is deposited onto the driving electrode, which is often referred as “electrowetting on dielectric” (EWOD). In this case, the capacitance of the dielectric layer is superior to the electrical double layer capacitance at the electrode-liquid interface. By increasing the voltage, the energy stored in the capacitor get increased, and meanwhile, the effective surface energy gets reduced. Young’s equation is therefore modified as follows:
Here is the permittivity of the dielectric, is the applied voltage-difference, and df is the dielectric thickness. Combining Equations (1) and (2) yields
Thus, electrowetting can be well used to dynamically modify the force balance at the contact point, and thereby the contact angle gets changed accordingly, as shown in Figure 1b.
Based on the principle of electrowetting introduced above, we have established a two-layer metal grating structure model as shown in Figure 1c. In such design, silver and silicon are selected as the metal and dielectric materials respectively, forming the core architecture of grating filter. Compared with single-layer metal grating, the two-layer sub-wavelength metal grating has superior polarization and filtering performance. To integrate the electrowetting features in the model, a thin, hydrophobic polymethyl methacrylate (PMMA) layer is added onto the sidewalls of upper silver strips. Meanwhile, the upper and lower silver strips are acting as the driving and grounding electrodes respectively. A certain proportion of water and oil, acting as the conducting fluid and insulating fluid respectively, are then added to the space between the upper silver strips of the adjacent gratings. The interface curvature between the oil and water is initially determined by the force balance as predicted by Equation (1) and can be modulated by regulating the electrowetting voltage applied between the two electrodes as shown in Figure 1d–f.
As the surface tension of the oil is smaller than that of water, the initial state, that is, when the voltage is 0, the contact angle of water on the sidewall surface is relatively large, and the interface bulges in the direction of the oil, as shown in Figure 1d. During the process of increasing the applied voltage, the contact angle is gradually reduced, and the interface gradually flattens and then bulges toward the water, as shown in Figure 1e,f. Meanwhile, the media distribution in such device changes with the interface morphology, rendering the modulation of filtering function. If we reduce the voltage again, the centre point of oil–water interface will gradually recover to the previous height. Furthermore, the response time of electrowetting technology is particularly short, so the desired interface morphology can be quickly realized by applying a certain voltage.
To explore the relationship between the interface morphology and applying voltage, as well as the dynamical filtering function, COMSOL Multiphysics and the finite difference method are used in present study. For material selection in the simulation software FDTD, we chose oil with a refractive index of 1.7, water with a refractive index of 1.3, silicon in the material library, and silver in the palik (0–2 μm). The boundary condition is a periodic condition, and the light source is a 400–760 nm plane wave.

In summary, we have designed a new type of color filter in combination with advanced electrowetting fluid handling technology and double-layer grating structure. We fully consider the compatibility of fluid self-assembly methods with traditional micromachining methods. By changing the applied voltage between the conductive fluid and the driving electrode to change the environmental medium around the metal in the grating, the color of the extinction color can be dynamically and reversibly adjusted. The tunable device can be reused, the liquid parameters are easily changed, and the response speed is extremely fast. As such, there is a wide range of important potential applications in the fields of new flat panel display, photovoltaic, and so on. 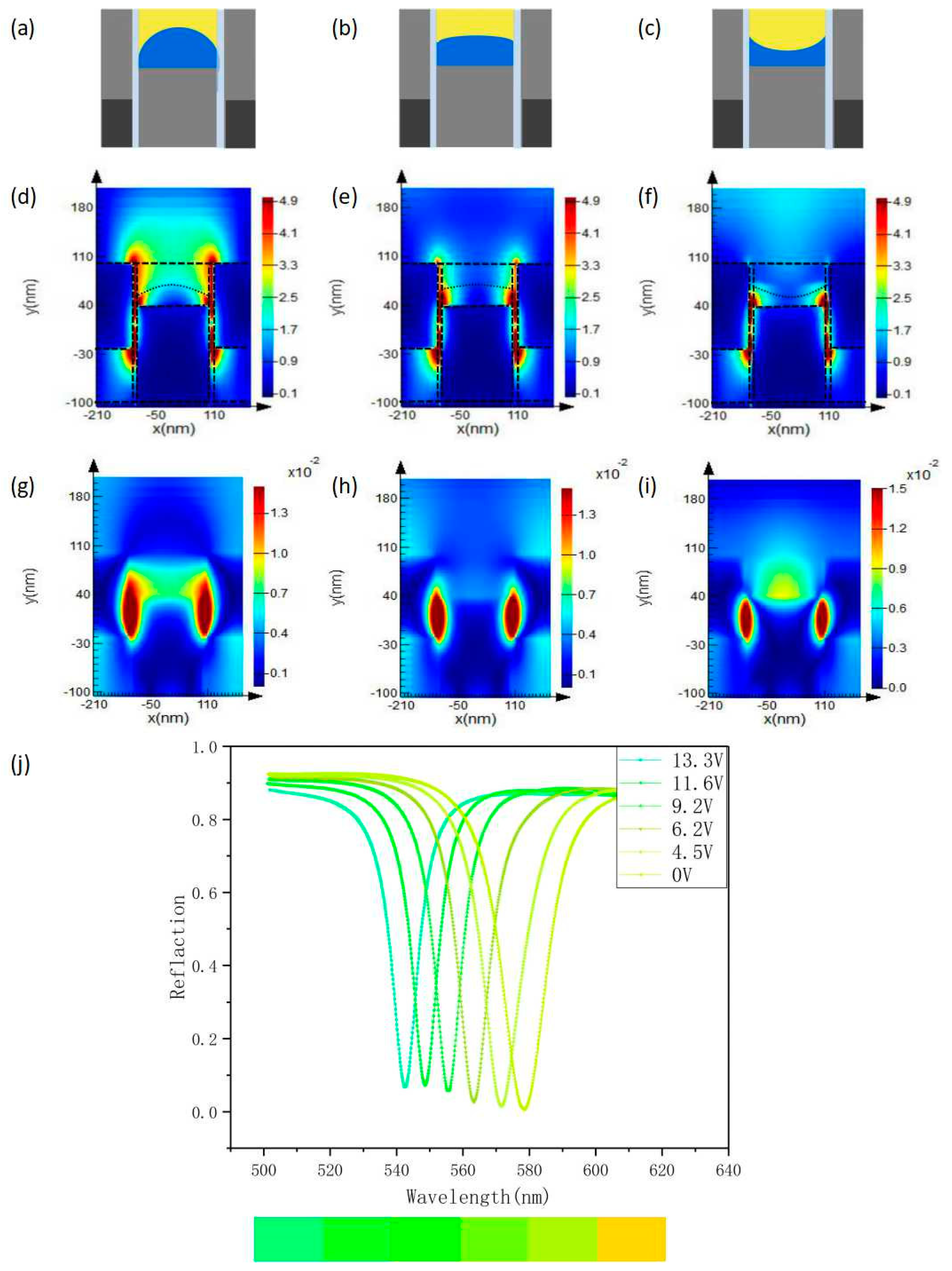 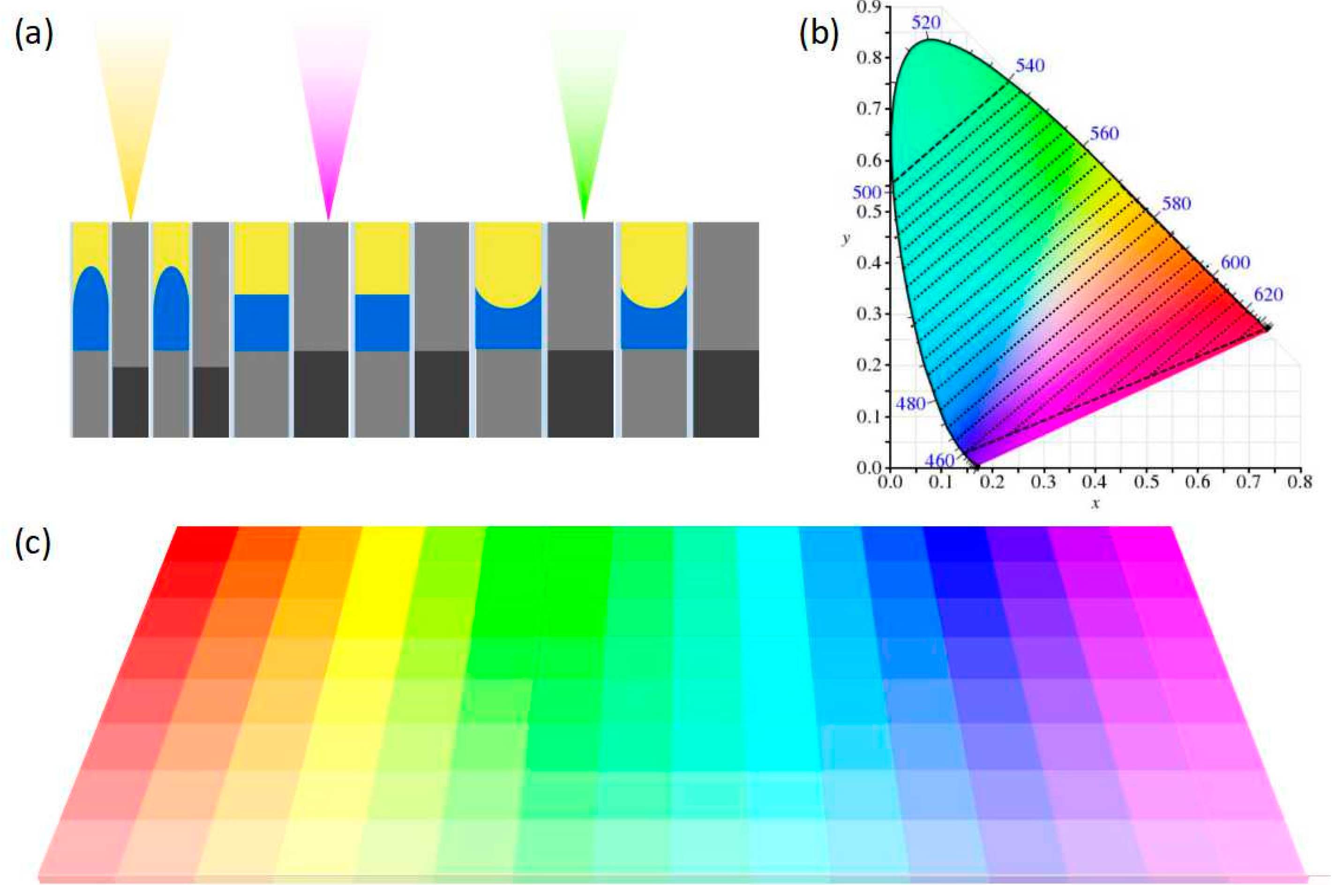