A solid catalyst works with gas mixtures, so knowing the adsorbate concentrations in a mixture is important. This is a gas-surface thermodynamics problem, but the result is also used in and affects the chemical kinetics when a slow step involves an adsorbed species. For example, in the methanol-to-olefins (MTO) process where methanol protonation is a slow step in the reaction network in a mechanistic step described by Van Speybroeck and coworkers [1], methanol concentration would appear in its kinetic expression as a first order term. At high conversion where the reaction occurs in a mixture of methanol and olefins, it is the surface concentration of methanol in the mixture that is needed. It is only when the correct use of the thermodynamics is used to get the correct concentrations of individual adsorbates in the mixture that the correct activity and selectivity will be obtained.
It is known that the multicomponent Langmuir isotherm (MLI) for competitive adsorption can be incorrect for calculating the surface concentrations in a mixture [2]. In describing adsorption equilibrium in separation equipment, the MLI is seldom used, presumably because it would be incorrect, which is broad albeit indirect admission of the inadequacy of the MLI. Bartholdy et al. [3] did not recommend the MLI after a comparison of the predictions of the MLI, ideal adsorbed solution theory (IAST) and other mixed gases models. Krishna and Baur [4] and Hansen et al. [5] computed that incorrect equilibrium concentrations due to the MLI gave wrong kinetics concentrations.
On the other hand, for gas-solid catalyzed reactions, the textbooks teach us to use the MLI to calculate the surface concentration of a component in a mixture. This is despite the knowledge that MLI calculations are not consistent with solution thermodynamics, i.e., their calculated results can differ from those calculated using equations that include solution thermodynamics, e.g., IAST. IAST includes the solution thermodynamics of multiphase systems by imposing Raoult’s Law as the relationship between gas and adsorbed phase compositions, which is a feature that is not present in other adsorption mechanisms. Thus the reason why the MLI is still widely used, and whether it is correct for heterogeneous catalytic kinetics should be addressed. We can suggest that its wide usage in heterogeneous catalytic reaction kinetics is because the MLI is consistent with thermodynamics when the monolayer capacity is the same for all the adsorbed species. For competitive chemisorption on many catalysts, the monolayer capacity or site density is the same for all species, therefore the MLI can be used. Previously, we had examined the situation in SAPO-34 zeolite and argued that even when the site density is the same for all species, the use of the MLI for adsorbates in nanoporous zeolites is incorrect due to the presence of additional physically adsorbed molecules not adsorbed on the acid sites in the zeolite [6]. Here, we make the further argument that the way the IAST was used to get the adsorbate concentrations in a zeolite [4,5,6] that is relevant to catalysis was incorrect because the IAST gave the total concentration that includes additional physically adsorbed molecules not adsorbed on the acid sites, while it is only the molecules that are adsorbed on the acid sites that would take part in the reactions. In addition, we also specify that the theory is based on that the surface area is a well-defined quantity, the adsorption mechanism is both Type 1 chemical adsorption and Type 2 physical adsorption, and it assumes an ideal solution, which implicitly assumes that different molecules have the same size.

The catalyst used was a SAPO-34 zeolite described in Li et al. [7]. Its surface area, pore volume and pore size were, respectively, 1247 m2/g, 0.297 cc/g and 0.552 nm. The particle sizes were 1–2 μm. The acid site density was calculated from SEM-EDS and NH3-TPD data to be 1.0 mmol/g.
The measurement of adsorption isotherms and calorimetric (adsorption heat versus coverage) curves were performed on a homemade combination adsorption volumetric manometry and Tian-Calvet microcalorimeter apparatus described in Kobayashi et al. [8]. The adsorbates were dimethyl ether (DME) and ethene, and a binary DME-ethene mixture with the DME:ethene proportion of 57:43 mol%. Our interest in this system is for the chemical kinetics of the MTO process, but the results are relevant to the general theory of the heterogeneous thermodynamics between gas and surface concentrations of gas mixtures in materials with cage-like nm-sized cavities and pores. Adsorption was carried out after the zeolite sample was preheated at 400 °C for 5 h under vacuum, then first saturated by the gas to cover the sites of irreversible adsorption and evacuated so that the subsequent measurement measured only the reversibly adsorbed gas. During the adsorption experiments with a gas mixture, a mass spectrometer (MS; Stanford Research Systems, Inc., Sunnyvale, CA, USA) was used to analyze the residual gas phase composition to calculate the experimental adsorbed phase concentrations. The dead volume of the sample cell was 40 mL, which was large enough to allow the gas phase to be sampled by the MS with negligible loss of gas. Equilibrium in the gas phase was verified before the next dose by comparing MS samples from successive times until there was no change in the gas phase. Equilibrium was usually established within two to three hours when an alkane was used, and much quicker otherwise.

Adsorption of gases in SAPO-34 zeolite occur on dual sites: Type 1 sites (acid sites) and Type 2 sites (which are not actually adsorption sites, but the “space” occupied by molecules floating in the nm-sized cavities). Due to the existence of the dual sites, the multicomponent Langmuir isotherm is wrong for surface concentration calculations. The IAST is to be used to calculate correct surface concentrations. However, the IAST calculates the total concentration of the individual adsorbates, which includes physisorbed molecules on Type 2 sites that do not take part in the catalytic reaction. This concentration should not be used for reaction kinetics, and instead the adsorbate concentration in only the Type 1 phase should be used.

This research was funded by National Natural Science Foundation of China, grant number 21173125. 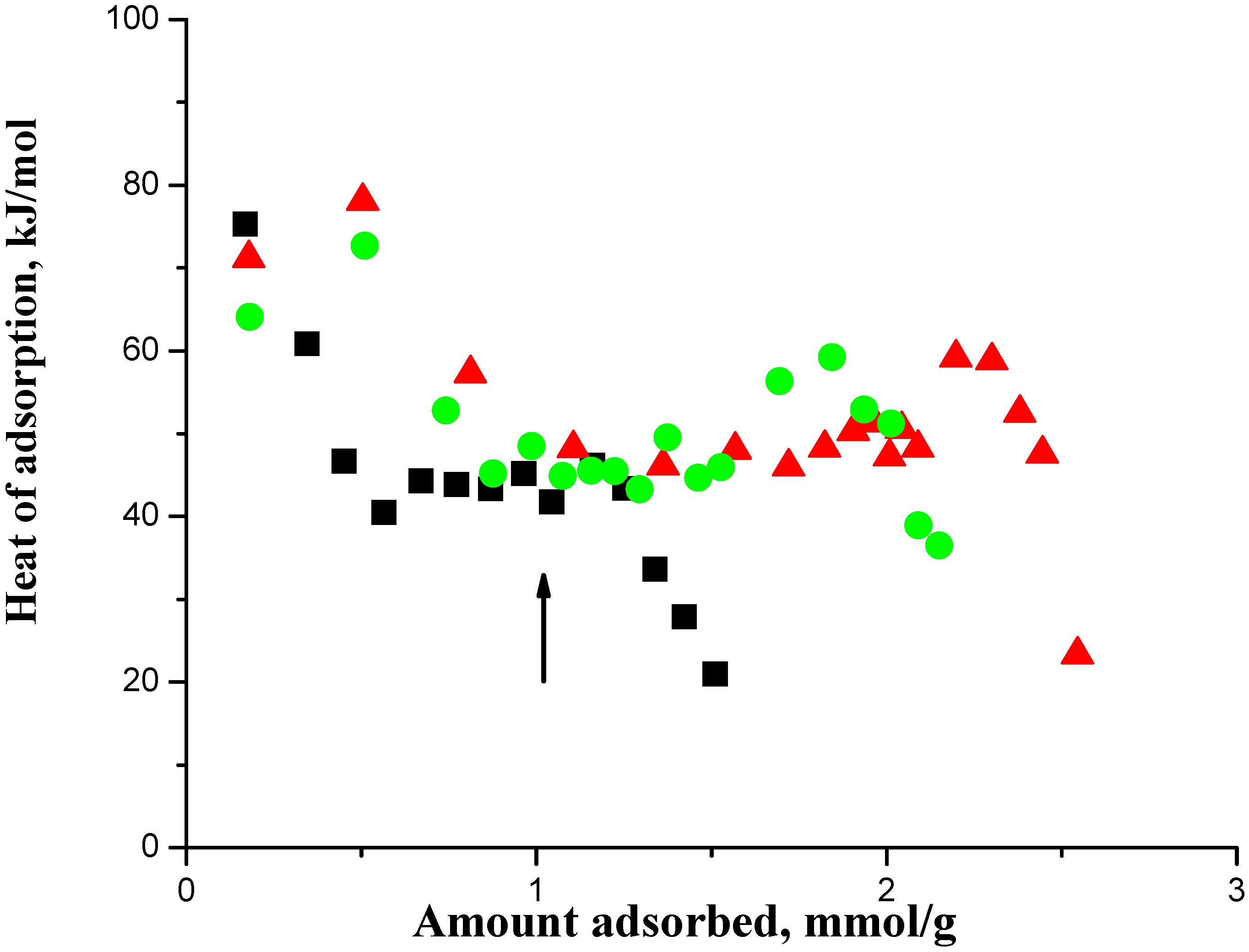 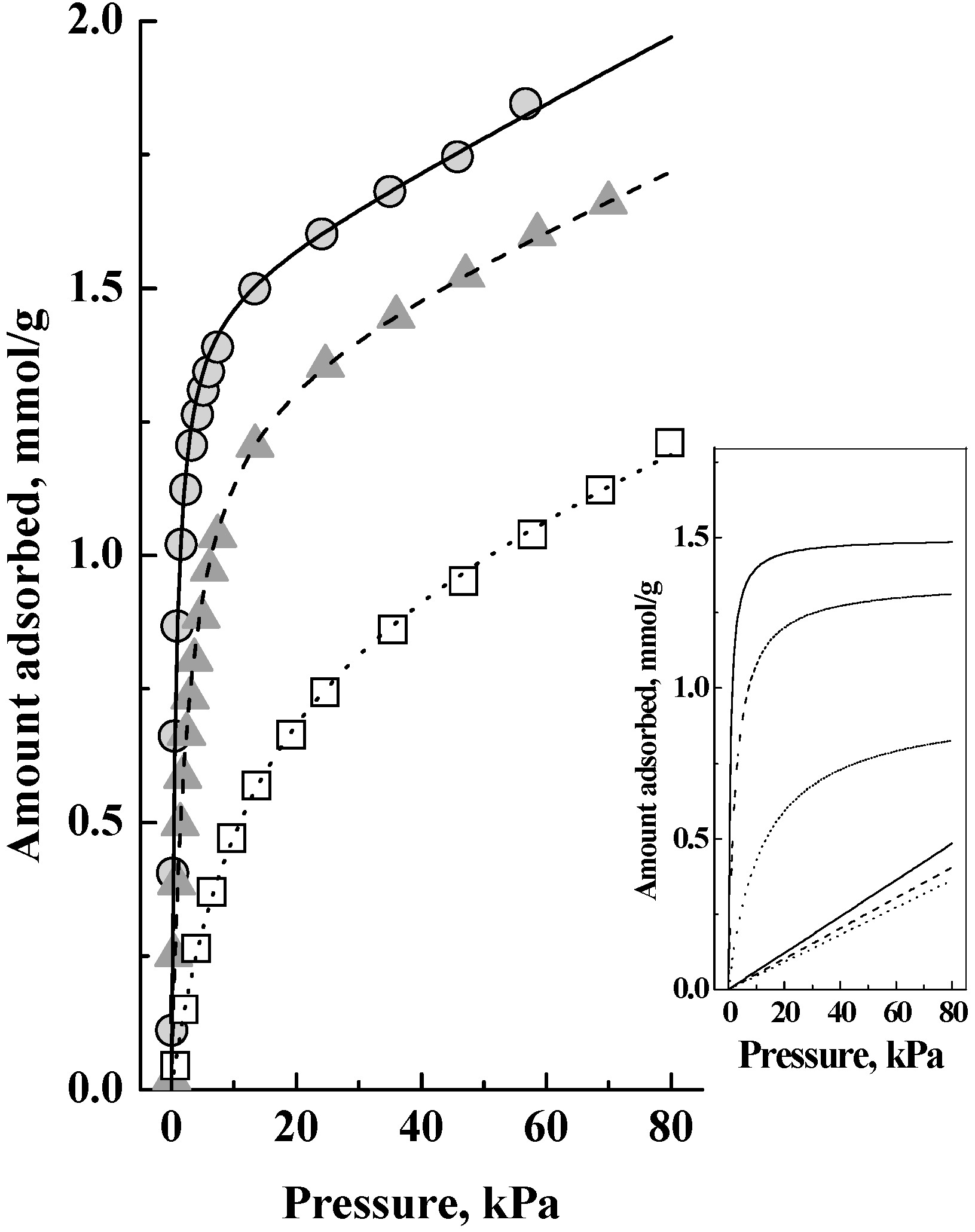