Platinum nanoparticles (PtNPs) have shown promise as diagnostic and therapeutic agents due to their unique physiochemical properties. However, critical parameters, such as toxicity and accumulation at both desired and other tissues, remain a significant concern in the clinical translation of these nanomaterials. Here, we examine the cytotoxicity, biodistribution, and effect on clearance organ function of an intravenously administered polyethylene glycol (PEG) -ylated PtNP construct. We synthesized hydrophobic PtNPs and assembled them into aqueous micelles with the lipid-polymer conjugate 1,2-distearoyl-sn-glycero-3-phosphoethanolamine (DSPE)-PEG (PtNP: DSPE-PEG, ~70 nm). This construct was well tolerated in mice receiving up to 15 mg platinum per kg body weight with no observed loss in weight, plasma chemistry within normal healthy ranges, and normal histopathology of organs after three weeks. Platinum quantification studies (inductively-coupled plasma mass spectroscopy (ICP-MS)) were also performed to assess biodistribution of PtNPs. The findings of this study are consistent with the in vivo accumulation of metal nanomaterials and further highlight the need to address clearance when designing nanomaterials for medical applications.
Keywords: platinum; nanoparticle; noble metal nanoparticles; in vivo toxicity; bioaccumulation platinum; nanoparticle; noble metal nanoparticles; in vivo toxicity; bioaccumulation

Noble metal nanoparticles are an emerging class of materials that may soon significantly impact human health through their widespread use and potential as functional biomaterials [1,2,3]. These nanoscale engineered particles possess unique electronic, physical, and chemical properties that are being exploited in biomedical applications, such as diagnostic assays [4], molecular imaging [5], implants [6], and drug delivery strategies [7]. Gold-based nanomaterials have been widely investigated in nanomedicine due to their ease of synthesis and the inert chemical nature of this element. Silver nanoparticles (AgNPs) are commonly used anti-microbial agents, and have predictably been shown to be more toxic in biological models relative to less chemically reactive gold nanoparticles (AuNPs) [8]. Recently, platinum nanoparticles (PtNP) have gained a great deal of attention in nanomedicine [9]. The intrinsic photophysical properties of these elemental particles have been explored in novel applications, such as photothermal therapy [10], radiation dose enhancement [11], and computed tomography (CT) X-ray contrast [12]. In addition, increased interest has been focused on the catalytic properties of PtNPs in a biological context as synthetic nanoenzymes for selective radical scavenging in the treatment of oxidative stress diseases [9,13,14,15,16].
A major hurdle to the clinical translation of these nanomedicines is the uncertain toxicity of these particles. Nanomaterial size and surface chemistry are fundamental characteristics that affect both the pharmacokinetics and biological response to these particles. In addition, it has been well established that the physiochemical properties of the material dictate tissue and cellular uptake, transportation, protein interaction, toxicity and ionization of the metal cores. Toxicity studies of noble metal nanomaterials, most notably AuNPs, have returned mixed results with difficulty in establishing strong relationships due to the wide variety of materials and experimental conditions reported [17]. However, some general conclusions on key parameters affecting their biodistribution and toxicity are beginning to be distilled from this body of work [17,18]. Unfortunately, less is known about PtNP toxicity beyond in vitro studies. Elemental platinum (Pt) is less chemically reactive than gold and has been shown to have intrinsic biological stability and tolerability [19]. In its zero oxidation state, Pt has been be shown to have no clinical consequence on women receiving breast implants containing the metal at ppm levels [6]. Increasing development of applications requiring administration by parenteral routes and larger quantities of Pt warrant more thorough studies of PtNPs.
Herein, we report the in vivo biodistribution and toxicity of a PtNP construct comprised of 2–4 nm Pt cores encapsulated in a polymer-lipid micelle (1,2-distearoyl-sn-glycero-3-phosphoethanolamine-N-[(polyethylene glycol)-2000] (DSPE-PEG2000)) with overall diameter of ~70 nm. The hydrophobic PtNP cores were synthesized by a method adapted from Zhang et al., utilizing oleylamine as a surfactant [20]. To enable the use of these nanoparticles in biological systems, we developed an encapsulation process to form uniform hydrophilic clusters of PtNPs. In this construct, the PEGylated surface serves to enhance biological compatibility, mitigate opsonization, and increase circulation time. By aggregating these nanocrystals into larger clusters, we avoid rapid renal clearance while maintaining a potential route of elimination upon subsequent degradation of the carrier [21,22]. In addition, the ubiquitous use of PEG and their functional derivatives to control surface chemistries, extend circulations times, and enable targeting strategies, make this platform a relevant model for these studies. We expect this work, demonstrating the relative biocompatibility of PtNPs, will contribute to the growing literature documenting the safety and response to nanomaterial administration. In particular, these results highlight the need to thoroughly examine the biodistribution and fate of noble metal nanoparticles in vivo.

PtNPs were synthesized by reduction of platinum(II) acetylacetonate (50 mM, 10 mL) in oleylamine by addition of an equal volume borane tert-butylamine (0.92 M, 10 mL) at 100 °C under an inert atmosphere. Once the solution turned black (~30 s), particles were allowed to ripen for 20 min at 100 °C. The suspension was cooled to room temperature, and PtNPs were precipitated in 200 mL ethanol followed by collection via centrifugation (20 min, ca. 5000× g). Particles were then suspended in 10 mL cyclohexane and briefly sonicated to disperse hydrophobic contaminants, washed in 50 mL ethanol, and recollected by centrifugation. PtNP cores were stored in ethanol until further use.

PtNPs were dried under nitrogen, quantified by dry weight, and re-suspended in THF at 1–10 mg/mL. DSPE-PEG was dissolved in THF and mixed with PtNPs to achieve exact weight and concentration ratios. 500 μL of these suspensions were slowly injected into 10 mL of 18 MΩ water, with rapid stirring. Micelles were allowed to stir for 2 h, and then dialyzed against 18 MΩ water using 10 kMWCO regenerated cellulose dialysis tubing (Snake Skin, Thermo Fisher Scientific) overnight. For larger scale synthesis of micelles for in vivo studies PtNPs were suspended in 15 mL THF at 2 mg/mL concentration, and added to 300 mg dried DSPE-PEG in a glass scintillation vial and re-suspended by emersion by sonication (20 min). After cooling to r.t., micelles were assembled by injecting the THF suspension though a 100 μL micropipette tip into 150 mL 18 MΩ water, stirred for 1 h, and dialyzed overnight twice against 4 L 18 MΩ water to removed residual THF. Assembled micelles were concentrated using an Amicon Ultra-15 10,000 MWCO centrifugal filter concentrator for 10 min at ca. 5000× g. Micelles were passed through a 0.8-μm syringe prior to Pt quantification and biological assays.

A 100 μL aliquot of PtNPs was digested in an equal amount of aqua regia in polypropylene test tubes for 12 h at room temperature. After the digestion, 200 μL of a freshly-prepared 4 M–0.4 M HCl-SnCl2 solution was added, along with an additional 200 μL of water. The absorbance of the resulting Pt-SnCl2 complex solution was measured on a Tecan Infinite® M200 Pro plate reader (Mannedorf, Switzerland) at 403 nm against a standard curve to yield a Pt concentration.

Cells were seeded in 100 μL of media (RMPI 1640 Medium for 4T1-luc-tdTomato and HepG2; DMEM for NIH3T3; all media was supplemented with 10% fetal bovine serum and 1% penicillin-streptomycin) at a density of 1000 cells into a 96-well microtiter plate. Cells were allowed to adhere for 12 h and subsequently incubated with either PtNPs or DMSO at concentrations ranging from 0.0512 to 2560 µM Pt, 10% for DMSO, for 1 or 4 h at 37 °C in a humidified 5% CO2 atmosphere. After the incubation period, all media/particles were aspirated off cells. 100 μL fresh medium was added and cells were allowed to proliferate for 72 h, followed by the addition of 10 μL alamarBlue® assay reagent (Thermo Fisher Scientific). Plates then incubated at r.t. for 24 h to stabilize the fluorescent signal. The viability of the cells was expressed as a percentage of the viability of cells grown in the absence of PtNP or DMSO. In addition, the cytotoxicity of the PtNP micelle complex was assessed by fluorescence-based LIVE/DEAD assay (Thermo Fisher Scientific).

All experiments involving mice were performed in accordance with the National Research Council’s Guide to Care and Use of Laboratory Animals (1996), under an animal use protocol approved by the Oregon Health and Sciences University (OHSU) Institutional Animal Care and Use Committee (IACUC) Protocol IP00000023 (approved 04/20/2015) . All studies used female BALB/c mice (6 weeks, 17–27 g, Jackson Laboratory). For the maximum tolerated dose study, naïve animals were used. For the biodistribution study, both a naïve and an orthotopic breast (4T1-luc-tdTomato) model were used. Cell cultures were prepared and maintained per vendor specifications. For the tumor-bearing mice, a 100-µL suspension of luciferase- and tdTomato-expressing 4T1 cells (1 × 105 cells per mouse in PBS) was implanted into the mammary fat pad. Tumor growth was monitored by bioluminescence and fluorescence imaging (Caliper Life Sciences IVIS XRMS, Waltham, MA, USA). The biodistribution study commenced five days after tumor inoculation, once tumors were palpable.

PtNPs were dosed intravenously into either naïve or tumor-bearing mice (n = 3) via tail-vein at 10 mg Pt/kg. An additional tumor-bearing mouse received a saline injection as a control. Twenty-four hours post-injection, blood was collected in heparin by cardiac puncture and centrifuged (300× g, 5 min, 4 °C) to isolate plasma from the cell fraction. The liver, spleen, lungs, heart, kidneys, and tumor (where applicable) were harvested and weighed, and either fixed in 10% formalin for histology (liver, kidney) or set aside for ICP-MS analysis (liver, spleen, lung, kidney, tumor, heart).

Tissue sample preparation was performed by digesting whole organs (kidney, lung) or a section (liver, spleen) in aqua regia for 24 h. Deionized water was added to bring the sample to volume and an appropriate acid concentration, and the samples were stored at 4 °C until Pt analysis was completed. Inductively-coupled plasma mass spectroscopy (ICP-MS) analysis was performed and validated by the OHSU Elemental Analysis Core.

Statistical differences between treatment groups were assessed by ANOVA and Student’s t-test for unpaired data between two groups. The level of significance was set at p < 0.05. If p < 0.05, Tukey-Kramer multiple comparisons post-tests was performed.

Recently, there have been substantial advances in our understanding of the cellular and physiological biology of cancer development and progression, but there remains a need to translate this basic cancer research into effective clinical therapies [38,39]. Nanotechnology opens the door to a wealth of new tools that can be utilized for the development of novel cancer treatments and diagnostics. Nano and molecular therapies that are capable of accumulating at the desired target, while evading the immune system, and minimal off-target effects, should enhance efficacy and reduce side effects for many known cancer therapies. Nanomaterials are particularly well suited for this application, as their size is small enough to remain in circulation for long periods of time (i.e., hours), but large enough to carry substantial cargo. The biological compatibility and biodistribution in vivo of each proposed therapeutic nanomaterial should to be thoroughly tested in order to understand potential biological impact. These results represent an integral step in providing essential information for understanding use of nanomaterials in translational applications.

The following are available online at https://www.mdpi.com/2079-4991/8/6/410/s1, Figure S1: Dynamic light scattering analysis of nanoparticles. Average population size is a function of both the concentration of PtNP in the assembly solution and the weight ratio of PtNPs:DSPE-PEG., Figure S2: Long-term bioaccumulation study of PtNPs. Total platinum per organ after PtNP:DSPE-PEG micelles were administered with at platinum concentrations of 5-20 mg/kg. After 3 weeks organs were harvested and quantified for platinum accumulation by ICPMS. 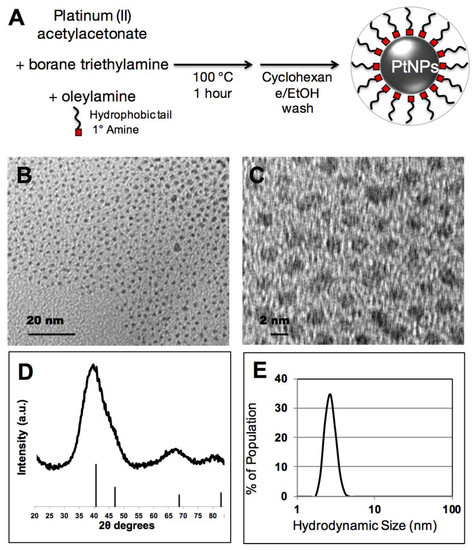 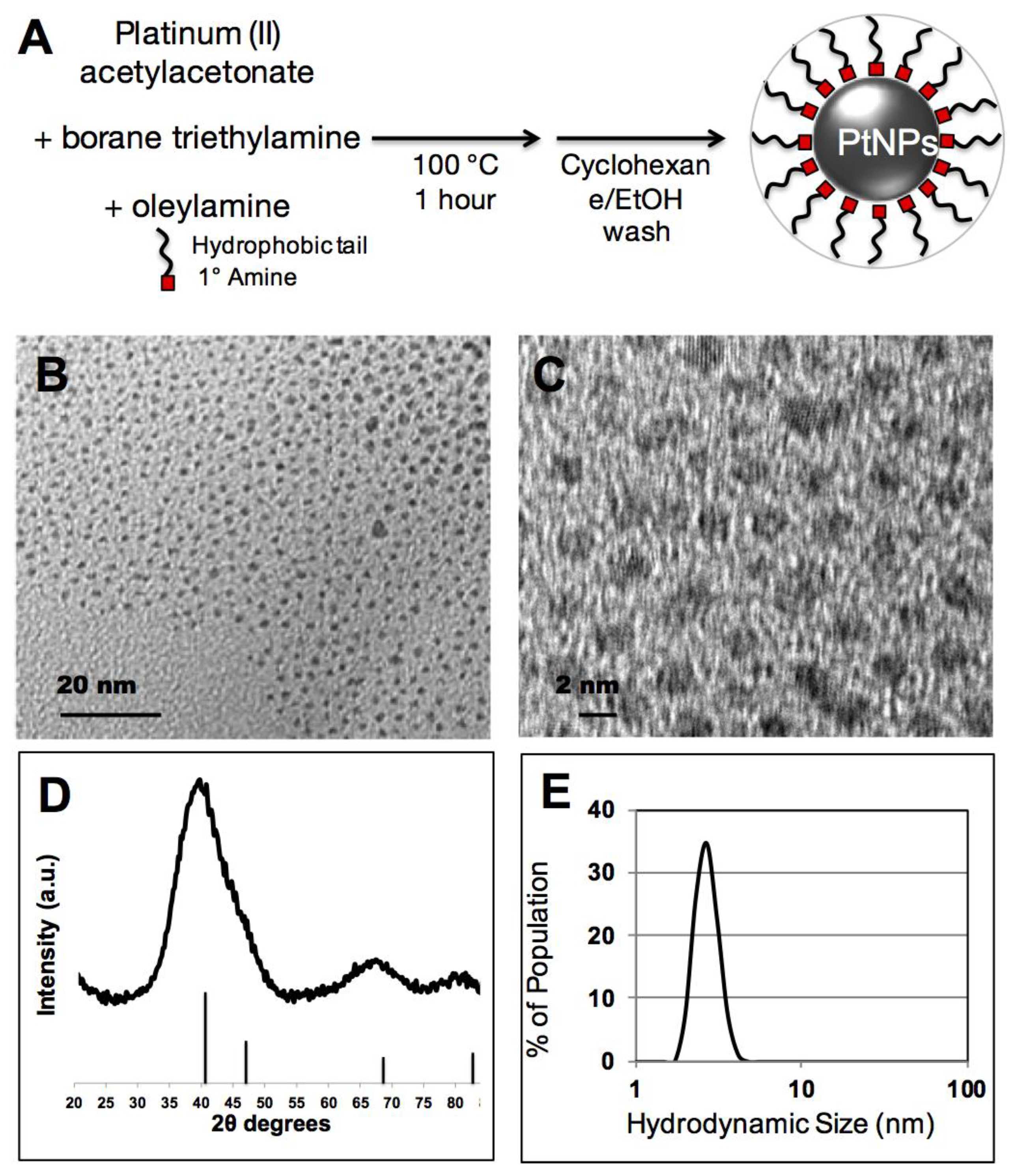 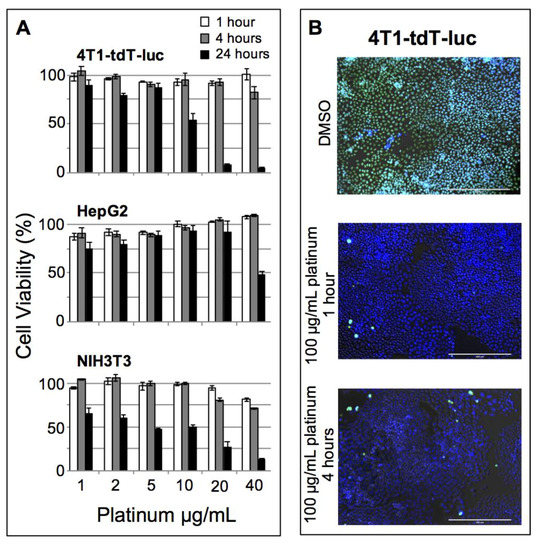 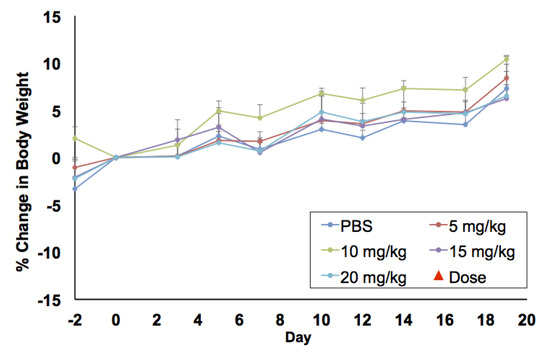 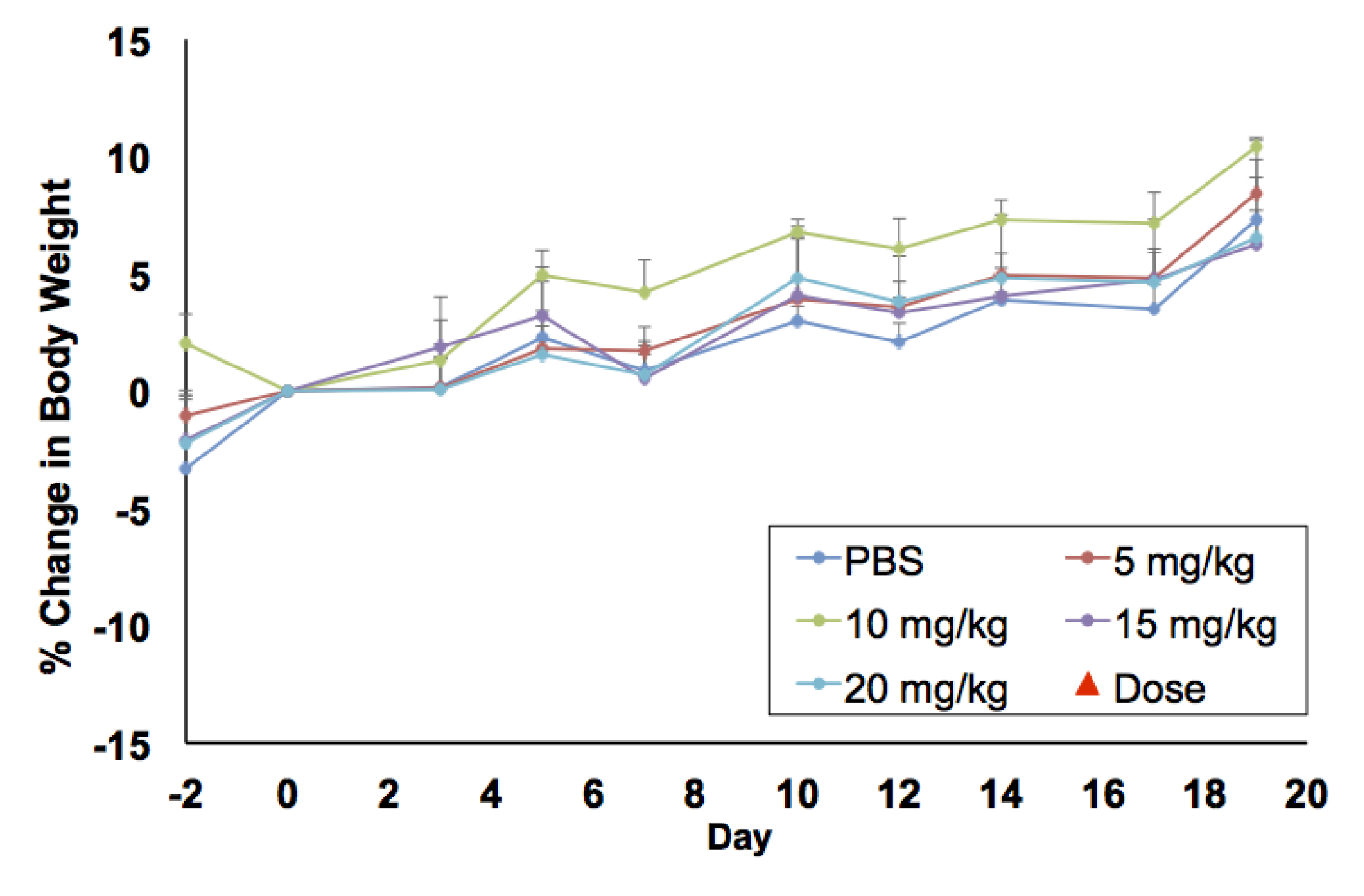 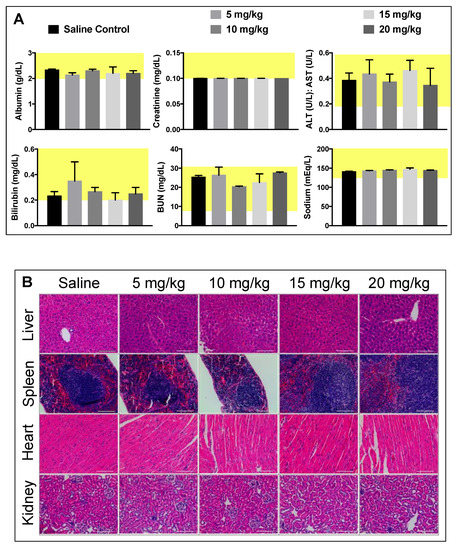 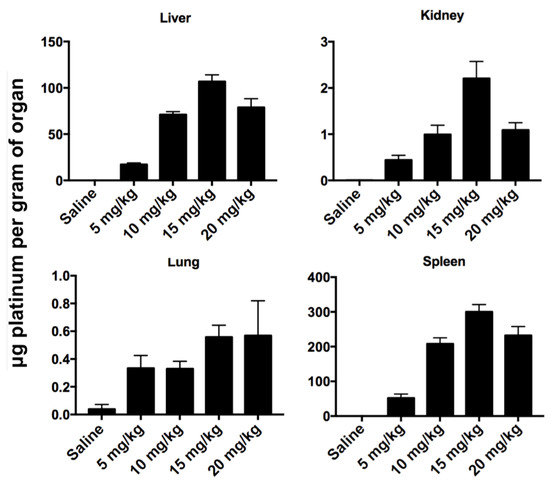 Table 1. Organ distribution of total injected platinum.
Table 1. Organ distribution of total injected platinum.
© 2018 by the authors. Licensee MDPI, Basel, Switzerland. This article is an open access article distributed under the terms and conditions of the Creative Commons Attribution (CC BY) license (http://creativecommons.org/licenses/by/4.0/).
We use cookies on our website to ensure you get the best experience. Read more about our cookies here.
Accept
We have just recently launched a new version of our website. Help us to further improve by taking part in this short 5 minute survey here. here.
Never show this again