Bare Iron Oxide Nanoparticles for Magnetic Harvesting of Microalgae: From Interaction Behavior to Process Realization
Next Article in Special Issue

:
This study presents, for the first-time, the results of a study on the hydrodynamic diameter of essential oils (EOs) of basil and lavender in water, and solutions of EOs of basil (B) and lavender (L) and hydroxyapatite (HAp). The possible influence of basil and lavender EOs on the size of hydroxyapatite nanoparticles was analyzed by Scanning Electron Microscopy (SEM). We also investigated the in vitro antimicrobial activity of plant EOs and plant EOs hydroxyapatite respectively, against Gram-positive bacteria (methicillin-resistant Staphylococcus aureus1144 (MRSA 1144) and S. aureus 1426) and Gram-negative bacteria (Escherichia coli ATCC 25922 and Escherichia coli ESBL 4493). From the autocorrelation function, obtained by Dynamic Light Scattering (DLS) measurements it was observed that basil yielded one peak at an average hydrodynamic diameter of 354.16 nm, while lavender yielded one peak at an average hydrodynamic diameter of 259.76 nm. In the case of HAp nanoparticles coated with basil (HApB) and lavender (HApL) essential oil, the aggregation was minimal. We found that the lavender EO exhibited a very good inhibitory growth activity (MIC values ranging from <0.1% for E. coli reference strain to 0.78% for S. aureus strains). The biological studies indicated that HapL material displayed an enhanced antimicrobial activity, indicating the potential use of HAp as vehicle for low concentrations of lavender EO with antibacterial properties. Flow cytometry analysis (FCM) allowed us to determine some of the potential mechanisms of the antimicrobial activities of EOs, suggesting that lavender EO was active against E. coli by interfering with membrane potential, the membrane depolarization effect being increased by incorporation of the EOs into the microporous structure of HAp. These findings could contribute to the development of new antimicrobial agents that are urgently needed for combating the antibiotic resistance phenomena.
Keywords:
hydroxyapatite; essential oil; Dynamic Light Scattering (DLS); antimicrobial studies

Recent advances in medicine and biotechnology have not been able to overcome the rapid and ongoing worldwide emergence and spread of drug resistant microorganisms. This fact has stimulated the search for new types of effective and nontoxic antimicrobial agents amongst natural compounds which are found in aromatic plants, and which have been previously used in cosmetics, folk medicine, and aromatherapy [1]. Nowadays, many plants possess great economic value, and it is estimated that approximately 700,000 species of tropical plants exhibit medicinal properties and can be used as antibacterial, antiviral, antifungal, antiallergic, anticarcinogenic and larvicidal agents [2,3]. Essential oils, which have been known for their perfume, flavor and preservative properties since antiquity, are aromatic oily liquids and can be obtained from different plant organs (flowers, buds, seeds, leaves, twigs, etc.) by expression, extraction, fermentation, enfleurage, and steam distillation [4,5]. It has been reported several times that some EOs possess antimicrobial properties [5,6,7,8], and due to the recent worldwide interest in “green” consumerism, the scientific interest regarding these substances has been revitalized [9,10]. Beyond their antibacterial properties [11], EOs have also been reported to exhibit antiviral [12], antimycotic [13], antioxigenic [14], antiparasitic [15], and insecticidal [16] properties.
The bactericidal properties of EOs vapors are presumed to have been investigated for the first time in 1881 by De la Croix [9]. Nevertheless, the use of EOs in medicine has become secondary to their uses as flavors and aromas in the 19th and 20th centuries [5]. Nowadays, the antibacterial properties of EOs and their components are exploited mostly in commercial products as dental root canal sealers [17], cosmetic preservatives [18], antiseptics [19], food packaging [20,21,22], etc. Although currently used in many commercial products due to their aromatic properties, EOs are widely known for their role in food safety and preservation [23,24,25,26,27,28]. Due to its biological properties and attractive aroma, lavender EO is widely used in the food industry [29,30,31,32,33]. Recent studies have reported the use of lavender in food industry for extending the quality and shelf life of bread [34]. Moreover, in their studies, Bensmira et al. have demonstrated that the incorporation of lavender oil into sunflower oil has a promising effected on the frying temperature of the oil [35]. In particular, it has been reported to demonstrate antimicrobial properties against a variety of microorganisms, especially Candida albicans, Escherichia coli and Staphylococcus aureus [36,37]. Due to its outstanding antimicrobial properties, lavender EO has also been investigated for use in strawberry packaging systems [38]. Sangsuwan et al. [38] demonstrated in their study that the overall quality of the fruit treated with lavender and red thyme EOs were maintained. Beyond that, the results revealed that lavender EO can extend the mold-free storage life of strawberries kept at 7 °C from 2 days (control) to 8 days. Over recent decades, anecdotal evidence has described the biologic activity of lavender EOs, but it is only recently that some of the claims have been scientifically investigated [37,39]. Another popular herb, basil, often referred as the “King of the herbs”, which belongs to the major oil-producing species, is widely utilized due to its economic, nutritional, industrial and medicinal importance [40]. Basil EO has been reported to exhibit antioxidant, antimicrobial and antitumor activities, due to its phenolic acids and aromatic compounds [41,42]. Recent studies have reported that different Eos, including those of lavender and basil, have antibacterial activities against gram positive bacteria, including Staphylococcus aureus, Bacillus species, and gram negative bacteria, namely Escherichia coli, Shigella flexneri, as well as pathogenic fungus, specifically Candida albicans [43,44,45,46]. Two of the most prevalent species of gram-positive and gram-negative bacteria that are responsible for very severe infections are Staphylococcus aureus and Escherichia coli. S. aureus is one of the most common Gram-positive organisms, and is responsible for a multitude of diseases, ranging from moderate skin infections and food poisoning to endocarditis and very severe bloodstream infections. E. coli is also a common nosocomial pathogen that causes urinary tract infections and enterocolitis. According to data from the Broad Institute in 2010, E. coli was responsible for 17.3% of of clinical infections requiring hospitalization, while S. aureus was accountable for 18.8% [47,48]. Due to the worldwide emergence of S. aureus E. coli strains which are resistant to conventional antibiotic therapy, there have been major concerns in the public health area invigorating the need for the development of new antimicrobial compounds. Hydroxyapatite is one of the most commonly materials used in the pharmaceutical and medical fields, due to its similarities to the human hard tissue, and its biocompatible properties. HAp has been utilized in biomaterial engineering and regenerative medicine, and was employed in the development of controlled drug delivery systems [49,50,51]. Besides its use in the medical field, HAp crystals are well known for their use in the food industry and agriculture. Initially HAp was utilized for softening drinking water, but after 1985, due to its remarkable properties for removing pollutants from water, HAp has been used for metal and nutrient recovery from wastewater systems [52,53]. Owing to its similarities with hard human tissue, HAp is currently being widely investigated for its possible biomedical applications as an antimicrobial agent. So far, studies have been undertaken involving HAp powders doped with several metal ions that are known to possess antimicrobial properties, such as silver, zinc, cerium [54,55,56,57], etc. In this context, the present work is focused on the use of hydroxyapatite as a carrier of Eos, in order to develop a new antimicrobial bioactive compound.
In this work, studies regarding the hydrodynamic diameters of basil and lavender EOs in water and of HAp nanoparticles coated with basil and lavender EOs (HApB and HApL) are presented for the first time. The antimicrobial activity of the newly-developed materials based on HAp nanoparticles (HAp-B and HAp-L) and plant EOs (B-Basil and L-Lavender) against Gram-negative (E. coli) and Gram-positive (S. aureus) bacteria was also investigated.

Our studies presented in this work fall within the general endeavors to develop new materials with potential antimicrobial effects with applications in the food industry, pharmaceutical, or medical fields for the prevention and/or treatment of infectious diseases. The studies on the hydrodynamic diameter of basil and lavender EOs in water are presented for the first time. The average hydrodynamic diameters of basil and lavender EOs in water and basil and lavender EOs coated HAp nanoparticles were determined from the autocorrelation function. The DLS investigations showed that aggregation was minimal for all the studied samples. The morphology of the HAp nanoparticles coated with basil and lavender EOs determined by SEM studies indicated that the plant EOs coatings have influenced the size of the HAp nanoparticles, i.e., a decrease was observed from HAp to HApB and HApL. The antimicrobial studies showed very good antimicrobial activity for lavender EO, with MIC and MBC values of <0.1% for E. coli ESBL producing strain and 1.56% for MRSA. HAp coated with lavender EO displayed a significantly elevated antimicrobial effect, when compared with HAp alone, suggesting the potential use of HAp nanoparticles as carriers of low concentration of lavender EO with antibacterial properties. Flow cytometric measurements showed that at ½ × MICs, lavender EO, HApB and HApL disrupted the membrane potential of the treated bacteria, thus indicating a possible antimicrobial mechanism of action of the materials. The most significant diminution of growth inhibitory effect has been observed against E. coli. These findings could significantly contribute to the development of new antimicrobial strategies in the fight to combat infections following prosthetic implantation.

We thank A. Richard from the “Centre de Microscopie Electronique” of University of Orléans for assistance in SEM data acquisition. 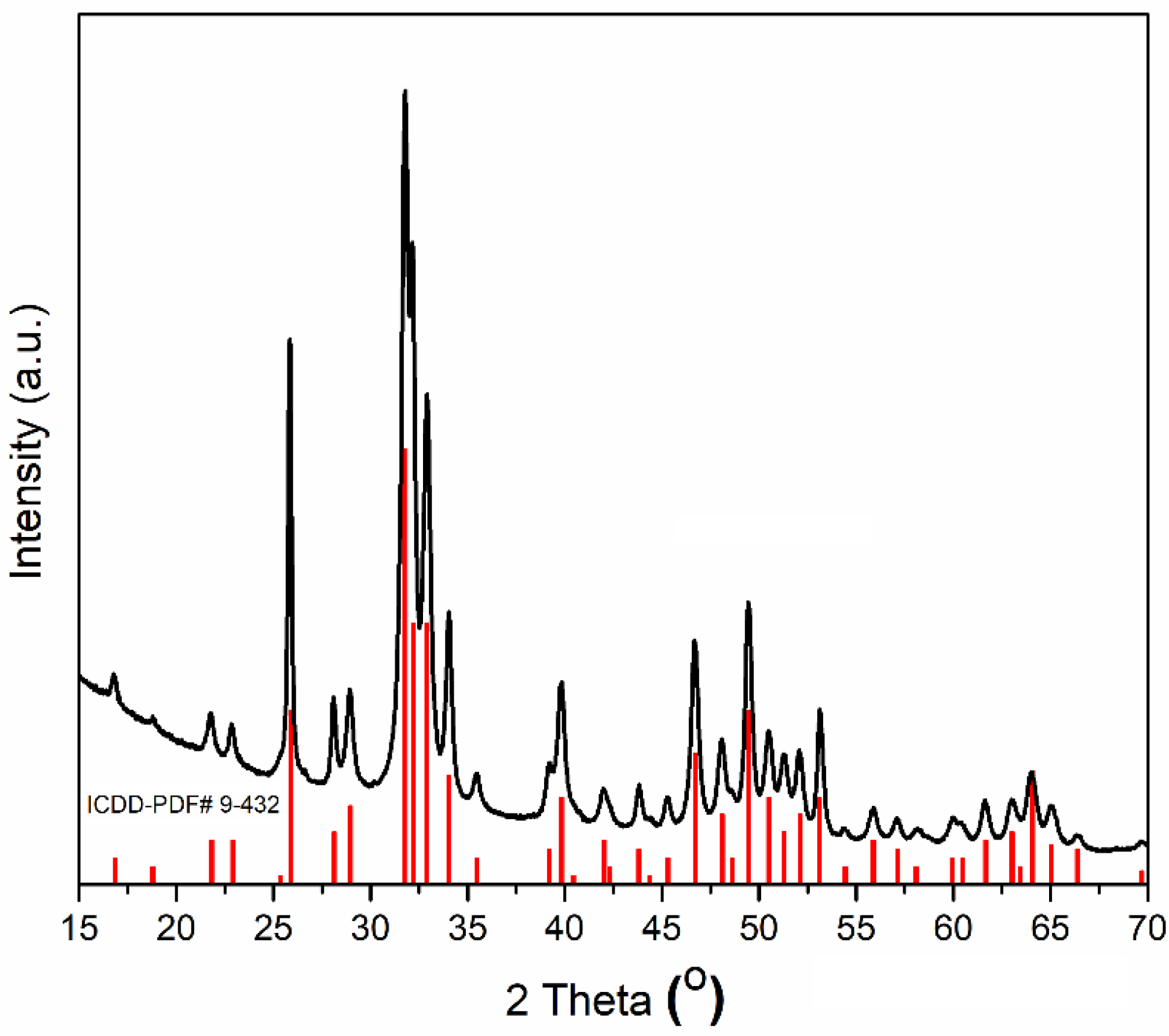 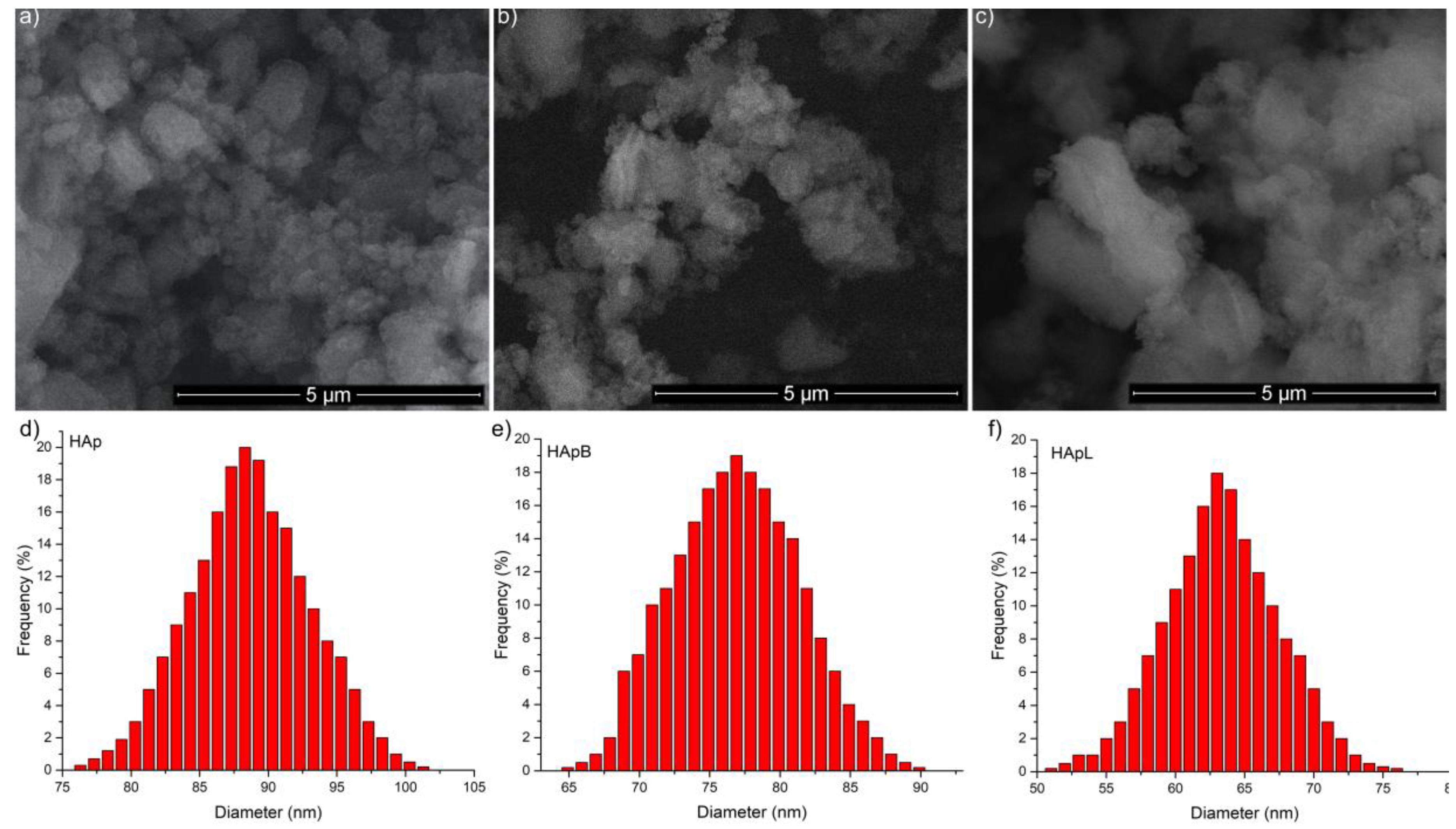 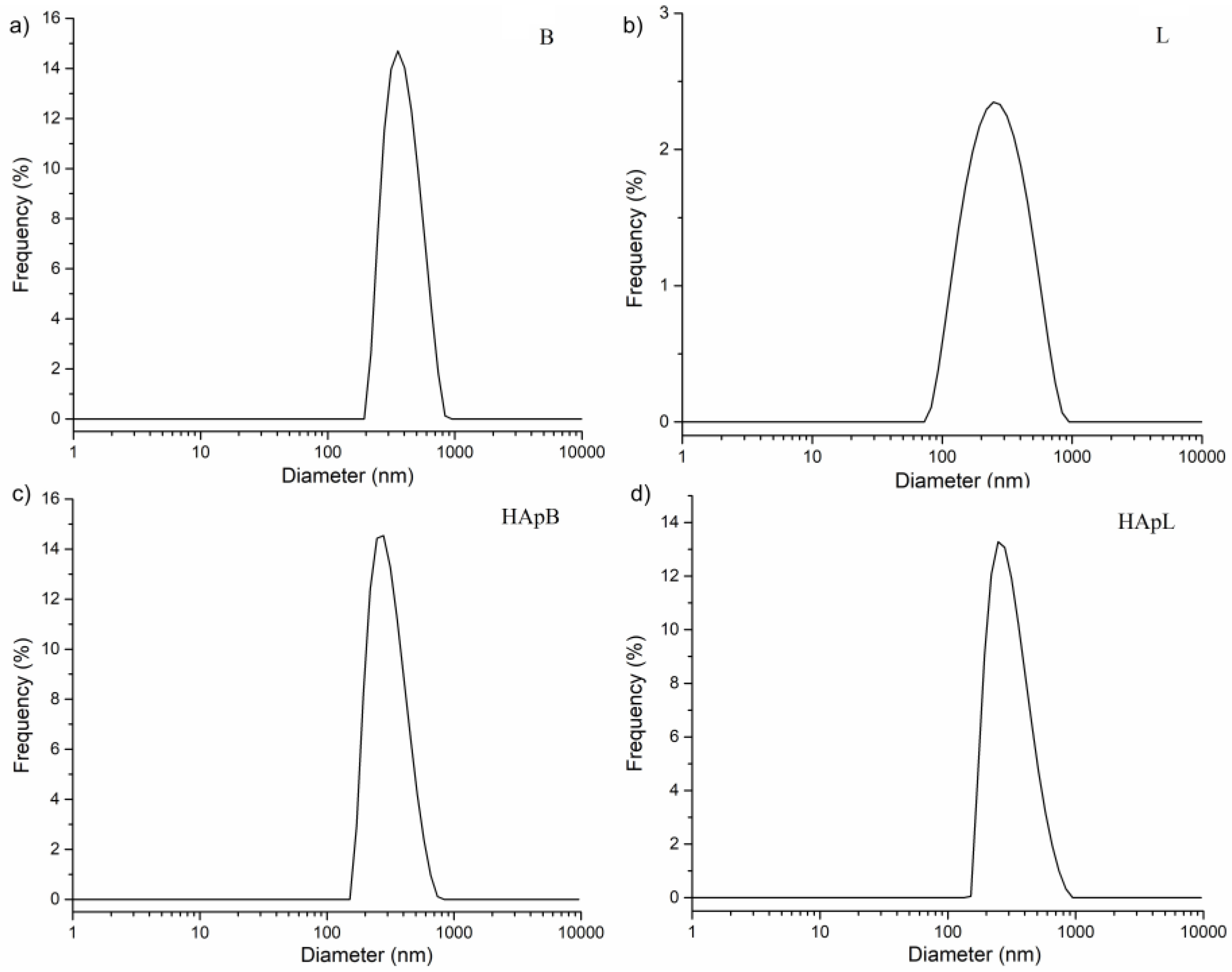