DNA-Assisted Assembly of Gold Nanostructures and Their Induced Optical Properties

The ionic transportation and dielectric properties of YF3:Eu3+ nanocrystals are investigated by AC impedance spectroscopy. The ion diffusion coefficient and conductivity increase along with the doping concentration and reach their highest values at 4% of Eu3+. The difference of ionic radius between Eu3+ and Y3+ leads to the structural disorder and lattice strain, which deduces the increase of the ion diffusion coefficient and conductivity before 4% Eu3+ doping; then the interaction of the neighboring doping ions is dominated, which results in the difficulty of ion migration and decreases of the ion diffusion coefficient and conductivity. The strong dispersion of the permittivity in the low frequency region indicates that the charge carrier transport mechanism is the ion hopping in the system. The low-frequency hopping dispersion is affected by an interfacial polarization, which exhibits a Maxwell-Wagner relaxation process, and its loss peak shifts to higher frequency with the ionic conductivity increasing. View Full-Text
Keywords: nanocrystals; ionic transportation; dielectric behavior; permittivity nanocrystals; ionic transportation; dielectric behavior; permittivity
►▼ Show Figures 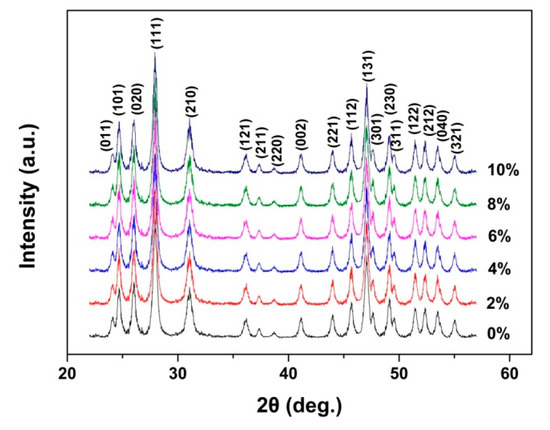