Monolayer-material-based optoelectronic devices possess promising characteristics for high-density integration, low-power-consumption, and high-speed operation [1,2,3,4,5,6,7,8,9,10,11]. However, monolayer materials have been used nakedly in the devices reported so far, and such devices suffer from a substantial amount of electrical and optical losses. To address this issue, we have employed monolayer-cored double heterostructures [12,13], which allow for carrier and photon confinements. Monolayer-gained semiconductor lasers show promise in the nanophotonics field [14,15]. Graphene lasers, if realized, would be an ultimate component in optoelectronics in view of environmental friendliness, potential low cost, small scale for high-density integration, and superb physical properties [3,7,9]. Semiconductor wafer bonding [16,17,18,19,20,21,22] is utilized to form heterostructures of dissimilar semiconductor materials with low defect densities, which is otherwise difficult to obtain by the conventional growth method due to the crystalline lattice mismatch. Wafer bonding is therefore promising for fabrication of high-performance semiconductor optoelectronics, and has been employed to generate a variety of heterostructured devices [23,24,25,26,27,28,29]. Here, we have fabricated a Si/graphene/Si double heterostructure by graphene-mediated bonding, serving as the first preparation of a monolayer-cored double heterostructure capable of providing a future basis for high-performance nanophotonic devices.

We used commercially available monolayer and bilayer graphene materials (Graphene Platform Corporation, Yokohama, Japan) in this work. Silicon, a versatile semiconductor, was adopted as the cladding material. We used single-side polished, epi-ready p-type Si <100> wafers doped with boron (doping concentration of ~1 × 1019 cm−3) and double-side polished, epi-ready p-type Si <100> wafers doped with boron (doping concentration of ~1 × 1016 cm−3). Large-area graphene sheets (~20 cm2) transferred onto the polished-side surface of the Si wafers was used in this study. In an attempt to create balance between ease in obtaining electric measurements from ohmic metal contacts and optical transparency for transmission measurements, the higher and lower doping-concentration Si wafers were used for monolayer and bilayer graphene, respectively. The Si wafer topped with a graphene layer was cut into ~1 cm2 area dies after being coated with a photoresist, in order to protect the bonding surface from particles generated during the cutting process. During cutting, no issues were observed for the graphene layer, which remained intact on the Si wafer and did not experience delamination. A bare Si wafer was also coated with a photoresist and then cut into ~0.64 cm2 area dies. Immediately before bonding, the photoresist on both dies was removed with acetone, along with degreasing of the bonding surfaces. The graphene-side surface of the graphene-on-Si wafer was brought into contact with the polished-side surface of a bare Si wafer with the same doping concentration, with their Si (011) edges aligned. The two die pieces were then bonded by annealing in ambient air for 3 h under a uniaxial pressure of 0.1 MPaG [28]. The detachment normal stresses were measured as the bonded interfacial strengths for the fabricated Si/graphene/Si samples, as well as Si/Si direct-bonded controls (no graphene). For current injection during electrical measurements, Al layers with a thickness of 100 nm were deposited by electron-beam evaporation as ohmic electrodes on both outer Si surfaces of the bonded samples containing a higher doping concentration. Alternatively, metal electrodes comprising an Au-Ge-Ni alloy (80:10:10 wt%) and pure Au with thicknesses of 30 and 150 nm, respectively, were sequentially deposited by thermal evaporation on the samples containing a lower doping concentration.
In the second part of this work, the functionality of the structure was demonstrated by attempting to generate and tune the graphene bandgap energy through application of an electrical bias voltage. Bilayer graphene [30] was used as the core material in the Si-cladded double heterostructure. Graphene bandgap energy is known to be detectable via observation of absorption peaks in transmission spectra [30]. According to Reference [30], bias voltages were applied in the normal direction of the planar Si/bilayer graphene/Si double heterostructures, and the measured optical transmission in the normal direction vertically penetrated the samples. Figure 1 depicts a conceptual drawing of the measurement system. Optical measurements utilizing Fourier-transform infrared spectroscopy (FTIR, PerkinElmer, Waltham, MA, USA) were conducted to observe the graphene bandgap. Attempts were made to detect the existence of the absorption peak induced by the bandgap energy, by eliminating optical interference from the acquired transmission spectral data using the after-mentioned theoretical calculations. Due to facility limitations, measurements were conducted in ambient air at room temperature in the photon energy range from 0.05 to 0.85 eV and applied bias voltage from −20 to 20 V. To clarify the change in transmission spectra induced by the bias voltage, the raw transmission spectra data obtained with bias voltage, V, were normalized to that without electrical bias (i.e., V = 0).

In this work, we have fabricated, for the first time, a monolayer-cored double heterostructure, towards the realization of high-efficiency nano-optoelectronic devices. We prepared a Si/graphene/Si stack by means of graphene-mediated wafer bonding and verified the interfacial mechanical stability and interlayer electrical connection, demonstrating a new application of wafer bonding. The fabrication scheme and structure presented here provides a new device platform for functional monolayer materials.

K.T. conceived the idea and designed the experiments. K.T. set up the wafer bonding facility and carried out the initial bonding tests. T.N. fabricated the samples, performed the measurements and calculations, and analyzed the data. Both authors contributed to discussion of the results and composed the manuscript.

This research was funded by the Inamori Foundation, Shorai Foundation for Science and Technology, Tonen General Foundation, and Japan Society for the Promotion of Science. 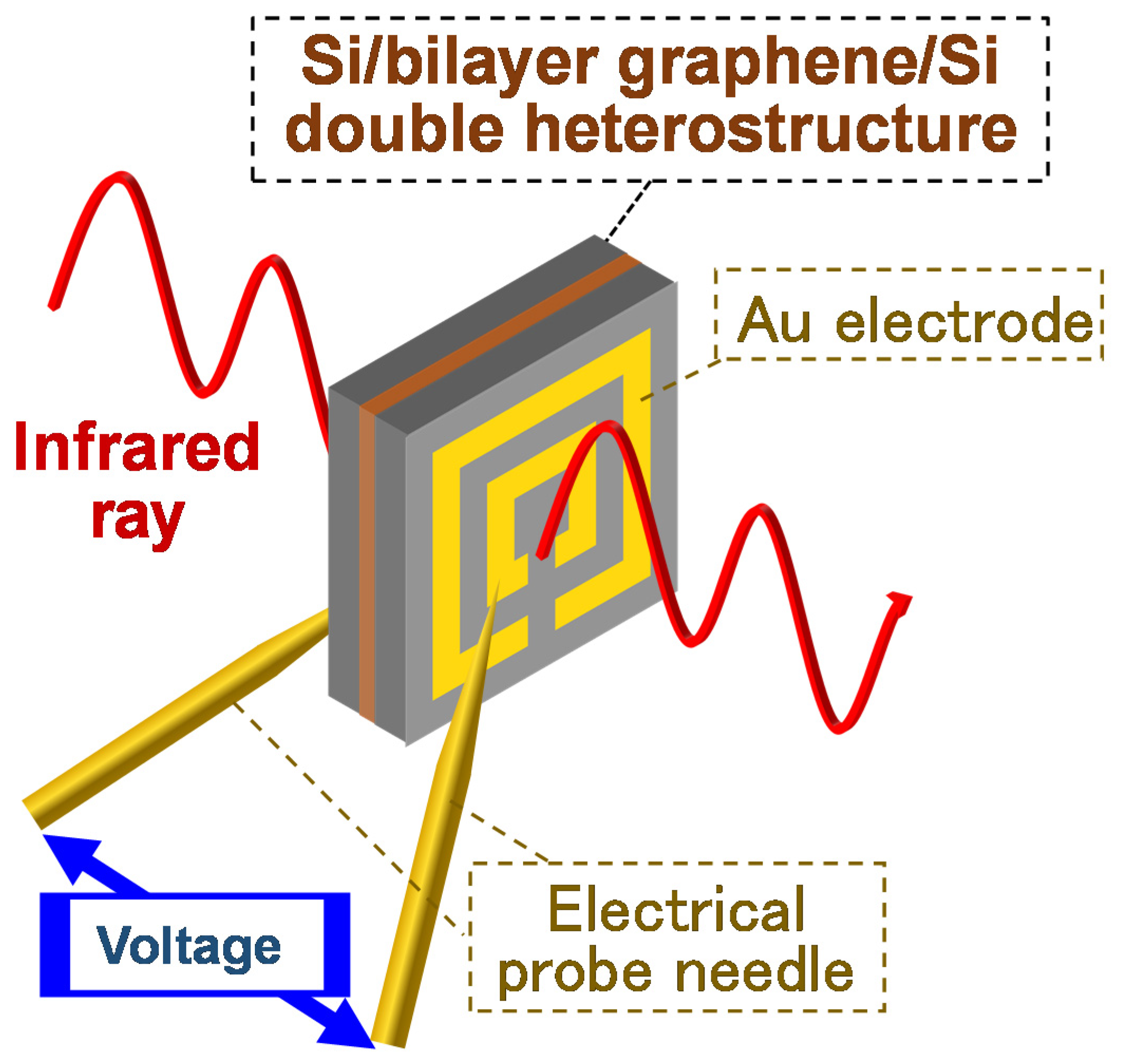 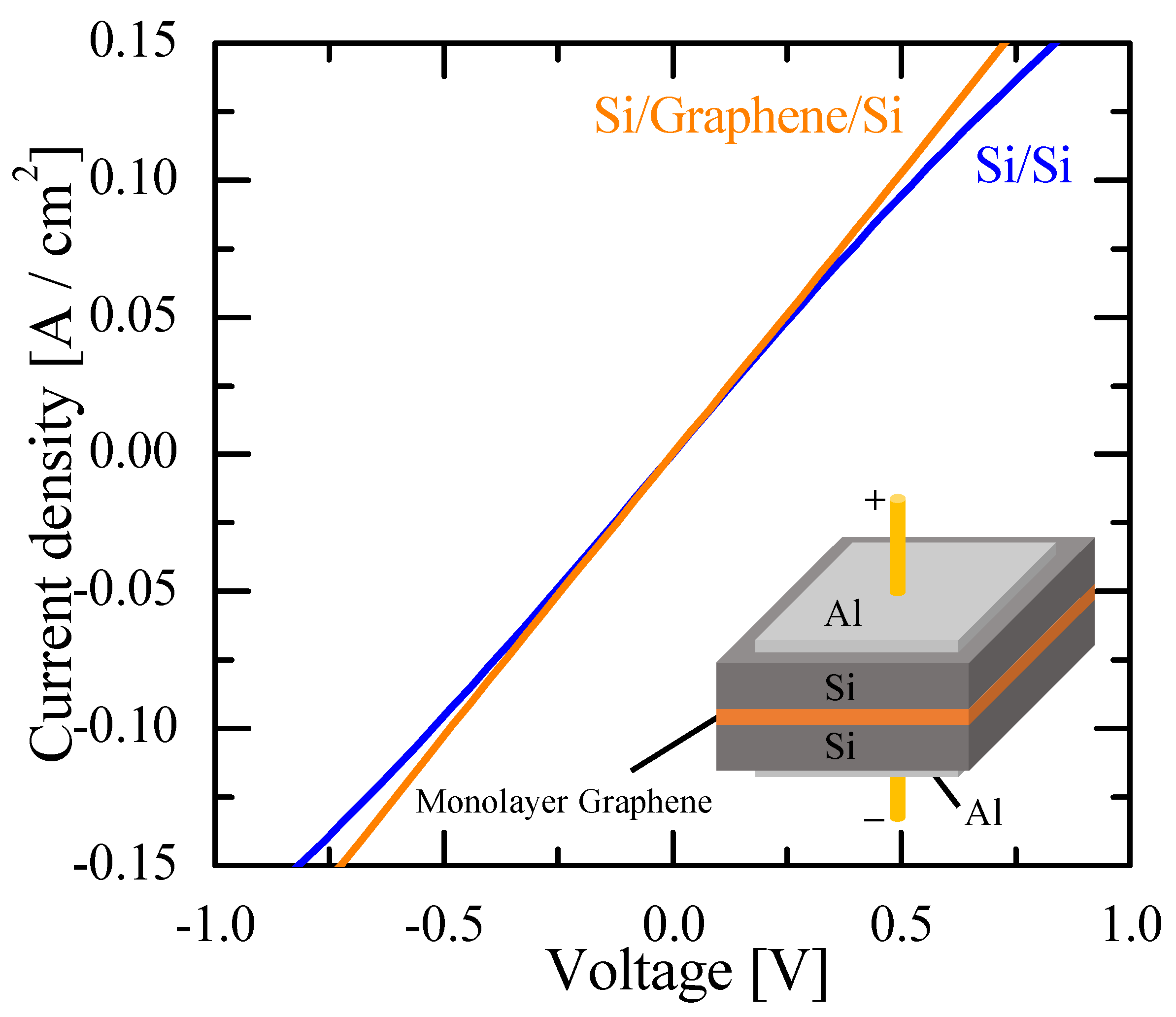 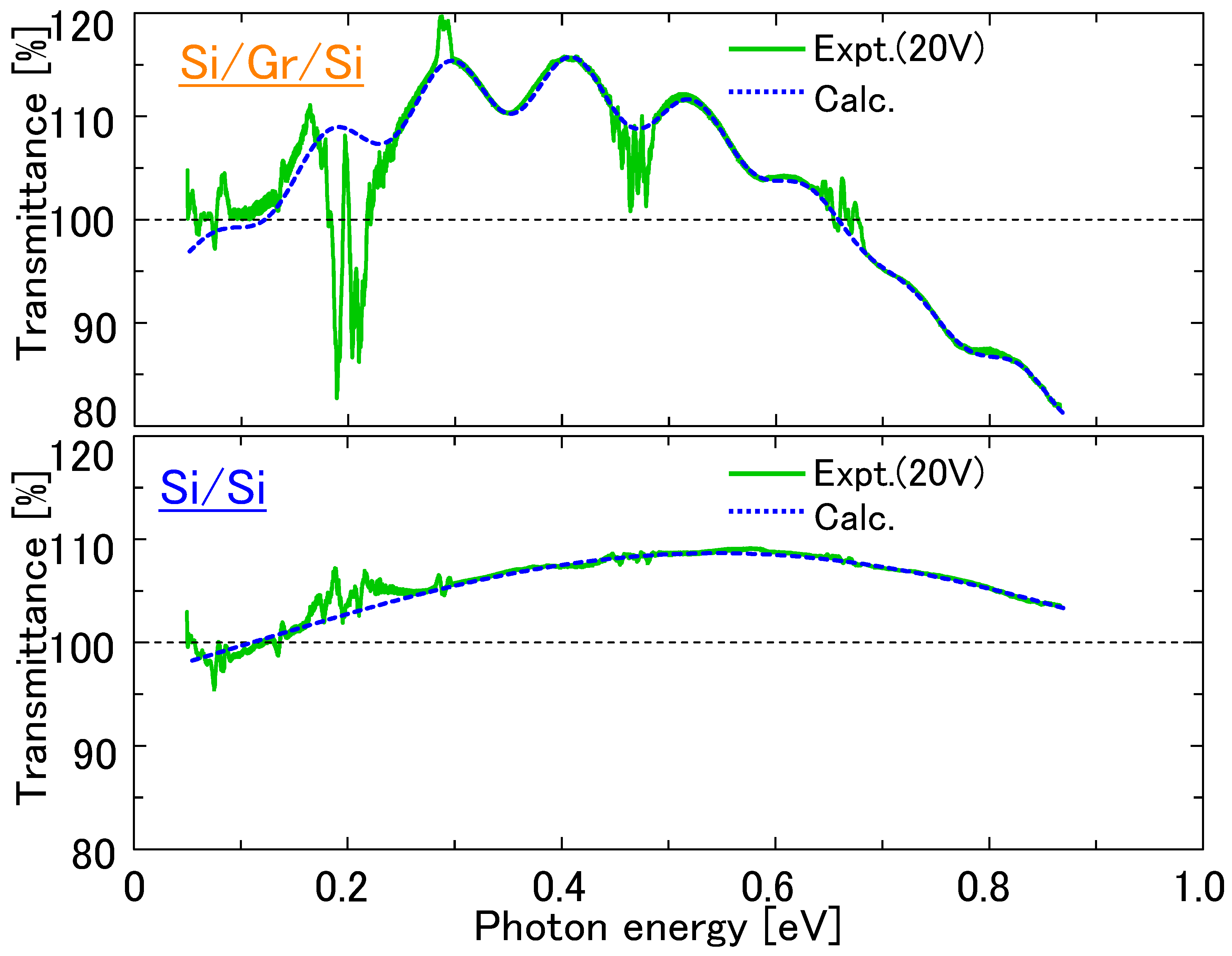