The self-assembly of AB diblock copolymers in three-dimensional (3D) soft confinement of nanoemulsions has recently become an attractive bottom up route to prepare colloids with controlled inner morphologies. In that regard, ABC triblock terpolymers show a more complex morphological behavior and could thus give access to extensive libraries of multicompartment microparticles. However, knowledge about their self-assembly in confinement is very limited thus far. Here, we investigated the confinement assembly of polystyrene-block-poly(4-vinylpyridine)-block-poly(tert-butyl methacrylate) (PS-b-P4VP-b-PT or SVT) triblock terpolymers in nanoemulsion droplets. Depending on the block weight fractions, we found spherical microparticles with concentric lamella–sphere (ls) morphology, i.e., PS/PT lamella intercalated with P4VP spheres, or unusual conic microparticles with concentric lamella–cylinder (lc) morphology. We further described how these morphologies can be modified through supramolecular additives, such as hydrogen bond (HB) and halogen bond (XB) donors. We bound donors to the 4VP units and analyzed changes in the morphology depending on the binding strength and the length of the alkyl tail. The interaction with the weaker donors resulted in an increase in volume of the P4VP domains, which depends upon the molar fraction of the added donor. For donors with a high tendency of intermolecular packing, a visible change in the morphology was observed. This ultimately caused a shape change in the microparticle. Knowledge about how to control inner morphologies of multicompartment microparticles could lead to novel carbon supports for catalysis, nanoparticles with unprecedented topologies, and potentially, reversible shape changes by light actuation.
Keywords: 3D confinement assembly; block copolymers; halogen bond; microparticles; multicompartment; nanoemulsions; supramolecular chemistry 3D confinement assembly; block copolymers; halogen bond; microparticles; multicompartment; nanoemulsions; supramolecular chemistry

Block copolymers (BCPs) have increased in importance over the last two decades and have become versatile building blocks for the bottom-up formation of nanostructures applied in materials science, nanotechnology, and nanomedicine [1,2,3,4]. BCPs consist of two or more covalently linked polymer segments, where competition between short-range attraction and long-range repulsion directs the formation of predictable morphologies with length scales of 10–100 nm. The phase behavior of block copolymers is highly affected by a number of intrinsic parameters, such as the degree of polymerization, Pn, the polymer–polymer interaction parameter, χ, and the weight fraction of the blocks, f. AB diblock copolymers have been extensively studied and it is well-established that their morphology can be controlled from a lamella morphology (f = 0.5) to cylinders or spheres. The BCP morphology is typically controlled by changing the molar fraction of the blocks, requiring multiple syntheses. However, if one block is an acceptor block, additives such as hydrogen bond (HB) donors or halogen bond (XB) donors are a convenient method to control block volumes. This allows straightforward control of the BCP morphology by varying the molar content of the HB/XB molecules [5,6,7,8,9,10].
Aside from bulk morphologies, BCPs have also shown great versatility in the formation of complex colloids. Colloids are typically synthesized via wet chemical processes and are currently available in many shapes and sizes [11]. The self-assembly of building blocks in three-dimensional (3D) soft confinement could provide an alternative bottom-up route for microparticle formation with precise control over the composition, surface, and inner structure of the colloids [12,13,14,15,16,17]. The soft confinement is typically provided in the form of a spherical liquid–liquid interface of oil nanoemulsion droplets in water. The evaporation of the oil phase increases the concentration of the building block on the inside and the shrinking sphere serves as a high-energy boundary that directs the self-assembly of building blocks into functional nanomaterials with novel shapes and composition. Nanomaterials are suitable building blocks, including (but not limited to) inorganic nanoparticles (and binary mixtures) [18,19,20], cellulose nanocrystals [21,22], carbon nanotubes [23], and of course BCPs. For BCPs, the spherical confinement generates new structures that are otherwise not found in bulk [24,25,26,27,28,29]. The inner structure of the final colloids structure is conveniently modified by the use of additives such as metal precursors [30,31], homopolymers [32,33,34], nanoparticles [35,36], and HB donors [37,38,39]. To expand the range of the inner structures and the number of functional domains within one microparticle, the confinement assembly of ABC triblock terpolymers should be considered. They generally present a more complex phase behavior due to the competition of three interaction parameters, χA, χB, χC, and two independent volume fractions, ϕA, ϕB, (ϕC = 1 − ϕA − ϕB) [40,41,42,43,44]. While few examples exist for experimental phase diagrams in bulk [40,45,46,47], as well as examples that utilize supramolecular complexation with HB donors [48,49,50,51,52,53], the confinement assembly of ABC triblock terpolymers to multicompartment microparticles is still largely unexplored [54,55,56]. Yet, combining the 3D confinement assembly of the ABC triblock copolymers with supramolecular modification with the HB or XB donors should be very interesting and could lead to a range of functional microparticles [57,58,59].
Here, we studied the self-assembly of two SVT triblock terpolymers in confinement to generate multicompartment microparticles and then analyzed the effect of block compositions on the obtained morphology. We then tuned the morphology by adding a range of halogen and hydrogen bond donors, with increasing association strength, to demonstrate the effect of HB(XB)/P4VP interaction on the morphology. XB donors included (E)-1-(4-(alkyloxy)phenyl)-2-(2,3,5,6-tetrafluoro-4-iodophenyl)diazene (XB A8, XB A12, XB A16) and (E)-1-(4-(octyloxy)phenyl)-2-(2,3,6-trifluoro-4-iodophenyl)diazene (XB C8). HB donors included cholesteryl hemisuccinate (CHEMS), lauryl gallate (LG), and 4-(4-octylphenylazo)phenol (8PAP). The formation of the complexes between 4VP and the donors was followed by infrared spectroscopy (IR). Microparticles and changes to their morphology were visualized with TEM.

In this work, we investigated the confinement assembly of PS-b-P4VP-b-PT triblock terpolymers. Depending on the overall molecular weight, we found microparticles with a concentric lamella–sphere morphology or a peculiar conic concentric lamella–cylinder morphology. When the SVT terpolymers were subjected to supramolecular complexation with the XB and HB donors, a controlled change in the microstructure was achieved for the SVT1/CHEMS system at a molar ratio of x = 1.00. We conclude that in order to change the morphology, it is not only strong binding that is required to effectively attach to the P4VP chain but a strong tendency for intermolecular packing is equally as important to compete with the high-energy boundary at the particle/water interface. It is only then that the polymer chains are stretched and are able to affect the morphology. This clearly shows that the situation is more complex as compared to the bulk case and requires further study to understand the competition between curvature and supramolecular modification of domains. In the case of the SVT1/CHEMS system, the change in inner morphology also influences the particle shape from small microspheres (d < 200 nm) to considerably larger elliptic microparticles (d > 1000 nm). This example demonstrates that supramolecular additives are able to modify the structure on several length scales, i.e., through attachment on a molecular level, chain packing on the mesoscale, and the shape of microparticles on the microscale.
In future works, we will investigate how to exploit the pre-assembly of SVT during solvent evaporation and study the possibility to assemble Janus nanoparticles in confinement. We will expand the library of XB and HB donors towards a more sophisticated control of inner morphologies of the multicompartment microparticles. The confinement morphology of SVT2 is of particular interest even without additives because of the prospect of creating Janus nanorings. Since P4VP rings are located at the PS/PT interface, covalent cross-linking with a diiodide molecule could fix this block arrangement leading to Janus nanorings with a permanently charged core and amphiphilicity on both the inside and outside parts of the rings. We will also explore the possibility of utilizing the photo-responsive properties of azobenzenes in order to induce changes to morphology and shape through light actuation, aiming for reversible shape changes [64].

G.Q. performed the preparation of the emulsion droplets, TEM analysis and IR measurements and wrote the manuscript. M.S. (Matthias Spengler) performed the syntheses of the halogen bond donors. M.S. (Marco Saccone) contributed to the IR measurements and calculated the binding energies. A.H.G. conceived and designed the experiments and wrote the manuscript. The manuscript was read and approved by all the authors before submission. M.G. and A.H.G. supervised the project.

This research was funded by the Professor-Werdelmann Stiftung as well as the German Research Foundation (DFG) in form of an Emmy Noether Young Researcher Group (2017–2022, No. 376920678). 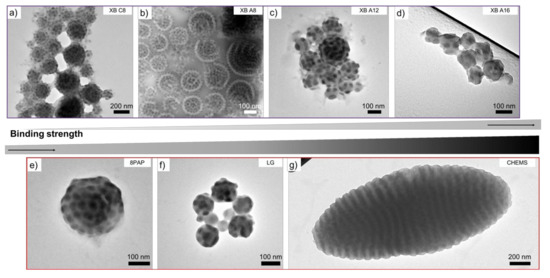 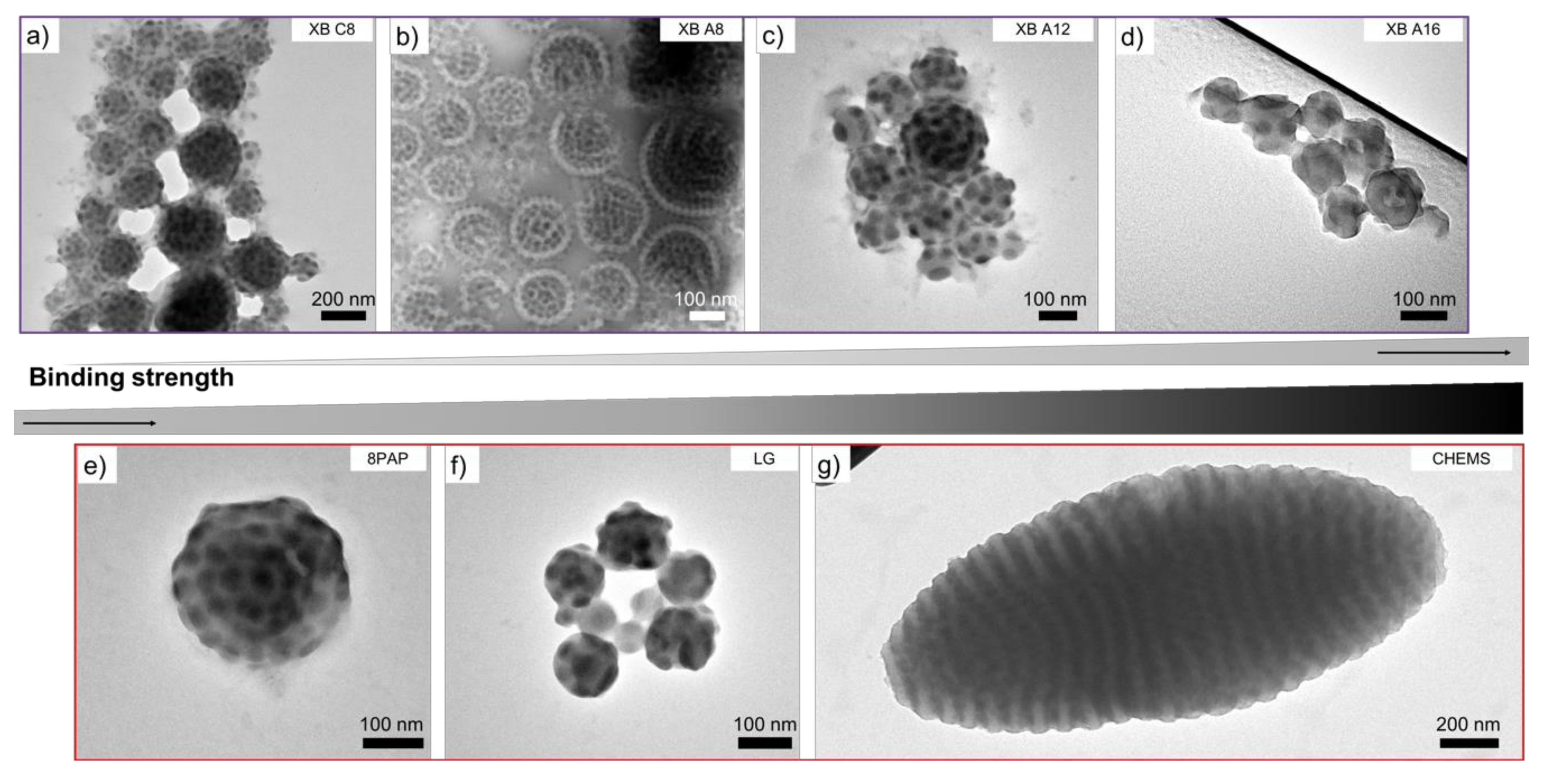 Table 1. Polymer specifics of the employed SVT triblock terpolymers.
Table 1. Polymer specifics of the employed SVT triblock terpolymers.
a Overall molecular weight (Mn), degree of polymerization (Pn) and weight fractions (f) were calculated through a combination of 1H-NMR and SEC measurements. SEC was performed with DMAc as an eluent, with a flow rate of 1.0 mL L−1 and PS standards for calibration.
© 2018 by the authors. Licensee MDPI, Basel, Switzerland. This article is an open access article distributed under the terms and conditions of the Creative Commons Attribution (CC BY) license (http://creativecommons.org/licenses/by/4.0/).
We use cookies on our website to ensure you get the best experience. Read more about our cookies here.
Accept
We have just recently launched a new version of our website. Help us to further improve by taking part in this short 5 minute survey here. here.
Never show this again