2. Preparation and Methodology of Rubber Nanocomposites

Rubber nanocomposites have been invariably prepared by solution blending and melt blending. The solution blending method of preparation is not eco-friendly and cost-effective due to the use of excess amount of organic solvents. On the contrary, melt-mixing of polymer with nanofiller is the most effective way to obtain the nanocomposites for commercial application. The method is totally environmentally friendly and does not require solvent. Any kind of polymers, such as thermoplastic or thermosetting, can be used to prepare nanocomposites by these techniques. It may be noted that properties of polymer nanocomposites are determined by the dispersion of the filler(s) in the polymer matrix and also depend on polymer-filler interactions. In view of this, different methods used in fabrication of polymer nanocomposites by mechanical blending, solution blending, in-situ polymerization, etc. could result in varying degrees of dispersion, as evidenced from scanning electron micrographs (SEM), field emission SEM, transmission electron microscopy (TEM), and high resolution TEM. Table 1, Table 2, Table 3 and Table 4 records the carbon-based fillers, methodology followed and morphology achieved for NR, SBR, NBR, and SR rubber nanocomposites.

3. Mechanical Properties of Rubber Nanocomposites of Carbon Based Fillers

The performance of a composite generally depends on the various filler parameters, including geometry, stiffness, and orientation. In addition, the dispersion of CNT, CNF, graphite oxide, and graphene within the rubber matrix account for enhanced properties of rubber. The effect of carbon based nanofiller incorporated rubber nanocomposites are described, as below.

Ethylene-propylene-dieneterpolymer (EPDM) is one of the most widely used and fastest growing synthetic rubbers because of its excellent resistance to heat, oxidation, ozone, weathering, and microbial attack, which are attributed to the stable and saturated polymer backbone and seals, radiator, electrical insulation, roofing membrane, tubing, belts, and other general-purpose applications, which dominate its impact with regard to various industrial aspects. However, EPDM filled with carbon containing fillers has received relatively lesser attention [144,145,146,147,148,149,150,151,152,153,154,155,156,157]. Enhanced mechanical properties have also been observed in EPDM/ MWCNT rubber composites that are prepared by the solution blending using sonication process [173]. The nanocomposites of EPDM filled with 0.5–5 wt % MWNTs exhibited improved mechanical properties as compared to the pure EPDM matrix [144]. The Young’s modulus significantly enhanced with the increase in concentration of MWNTs. In another study, the tensile strength and elongation at break of compatibilized EPDM/MWCNT (0–7 phr) were found to be higher than those of uncompatibilized nanocomposites. EPDM grafted with maleicanhydride on filling with CNF showed in mechanical strength with little compromise of higher density [147].
Dubey et al. [148] studied the radiation effect on the mechanical properties of SBR/EPDM (50:50) blend containing MWNT (0.5–5%). The elastic modulus, tensile strength increased with the radiation dose, while elongation at break exhibited a downward trend. The extent of reinforcement, as assessed using the Kraus equation, suggested high reinforcement of blend on MWNT addition. They also extended work on effect of radiations on PCR/EPDM/MWCNT nanocomposites [149]. It was noted that mechanical properties are improved due to synergistic effect of MWCNT induced reinforcement and high energy radiation induced crosslinking of the blend. The extent of reinforcement, as assessed using the Kraus equation, suggested high reinforcement of the blend on MWNT addition. The incorporation of silane treated multiwalled carbon nanotubes in EPDM show increase in ultimate tensile strength and hardness [154]. The formation of simultaneously strengthened and toughened nanocomposites based on polypropylene/EPDM matrix was achieved through enhanced adhesion between MWNTs and polymer matrix by using PP grafted MWNTs [155].
The tensile properties of PA-6/EPDM-g-MA (65:35) blend nanocomposites increased with the incorporation of the SWNT [152] The tensile modulus of PP/EPDM was enhanced by increasing SWCNTs contents in EPDM [153]. Narimani et al. [156] studied the effect of SWNT on mechanical properties of thermoplastic elastomer-based polypropylene (PP)/EPDM (80/20). The addition of SWNT increased the storage modulus. The impact strength and tensile strength improved when 0.5% of SWNT was used. Furthermore, the tensile modulus increased remarkably by increasing the SWNT content, but the elongation at break of the material decreased. The mechanical properties of EPDM filled phenol formaldehyde resin coated carbon nanotube have also been studied [157].
Allahbakhsh and Mazinani [201] investigated influences of sodium dodecyl sulfate on the mechanical performance of EPDM/GO nanocomposites. The maximum strength of the nanocomposite was about 137% more in the presence of SDS than the mechanical strength of the EPDM/GO nanocomposite. Furthermore, EPDM/GO nanocomposite was elongated up to 700% in the presence of sodium dodecyl sulfate. Valentini et al. [150] reported tensile properties in terms of the modulus at different strains (50%, 100% and 300%), maximum strength and elongation at break based on stress-strain characteristics of the EPDM- based nanocomposites containing CB, graphene, and graphene platelets (GNPs) [150]. As expected, the addition of the fillers to the EPDM matrix gives rise to an increase of the stiffness of the material, which is reflected in an improvement of the modulus at different strains. The elongation at break decreases on adding GNPs to the EPDM/CB blend. It is also noted that the EPDM/ GNPs (2 wt %)/CB (24 wt %) nanocomposite shows higher increment of the maximum strength along with a higher elongation at break with respect to the EPDM/CB blends due to the synergistic effect of CB and GNPs. Valentini et al. [151] also used platelets GNPs to prepare EPDM nanocomposites and studied its mechanical properties. Their study has shown that the composite with high filler contents give rise to an increase of the stiffness of the material.

This review article has addressed recent research carried out on elastomers that are filled with carbon nanomaterials. The melt mixing and solution methods are the most widely used methods to prepare polymer nanocomposites. The state of dispersion of fillers accounts for the enhanced mechanical and dynamical mechanical performances of individual carbon based fillers, such as CNT, CNF, graphene, expanded graphite, and graphene oxide. In addition, improvement is also pronounced with the hybrid fillers consisting MWCNT (or CNF)-MMT, MWCNT-Hectorite, MWCNT (or CNF)-LDH, and MWCNT-Graphene in a variety of rubbers matrix. It is inferred that the introduction of these carbon based fillers in NR, SBR, NBR, and SR nanocomposites led to significant improvements in tensile strength, impact strength, elongation at break, Young’s modulus, stand loss modulus, storage modulus, etc. However, more contemporary work is still to be focused on the development of corresponding EPDM and EVA nanocomposites. Payne and Mullin effects in rubber- carbon fillers nanocomposites are also reviewed. Thus, unique properties of carbon-based fillers make them superior when compared to conventional fillers, such as carbon blacks and silica requiring higher filler loading to enhance the mechanical properties of polymers. However, clear inference is not possible to compare the mechanical and dynamical properties of different nanostructural carbon filled individual rubbers due to their dependency on state of filler dispersion.

S.K. Srivastava is very much thankful to Indrajit Srivastava and Mili Srivastava for providing necessary facilities during his stay in USA and Canada respectively. 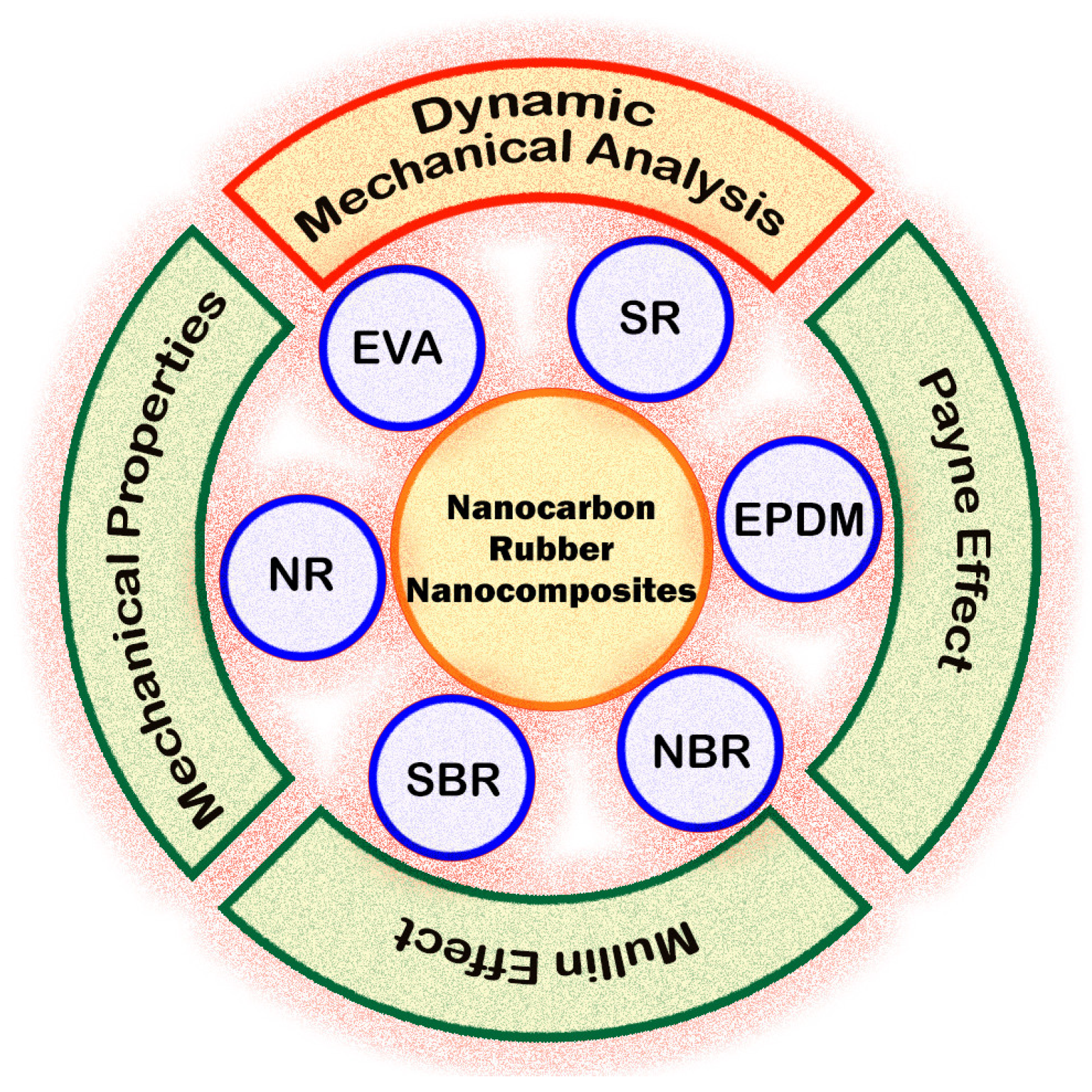 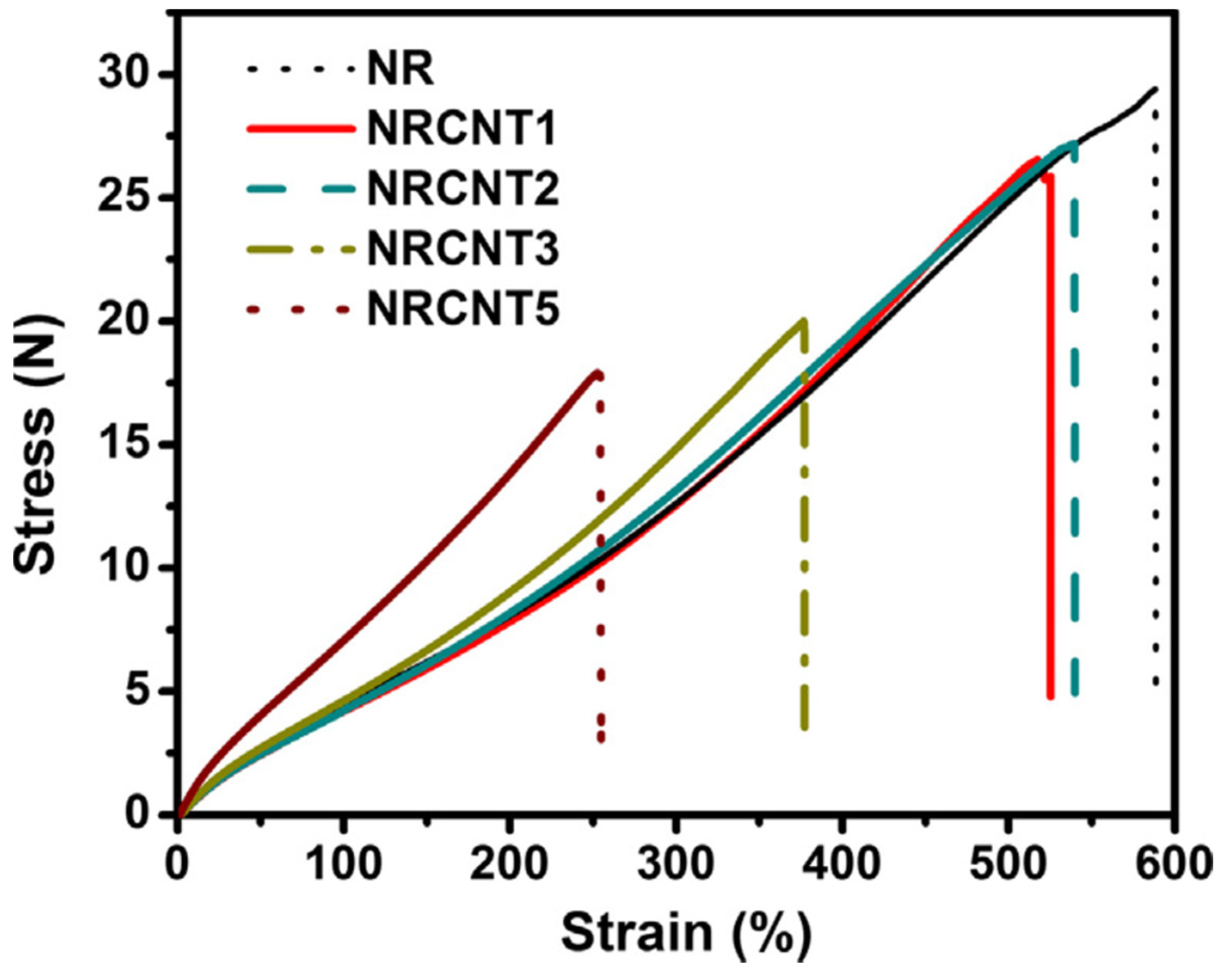 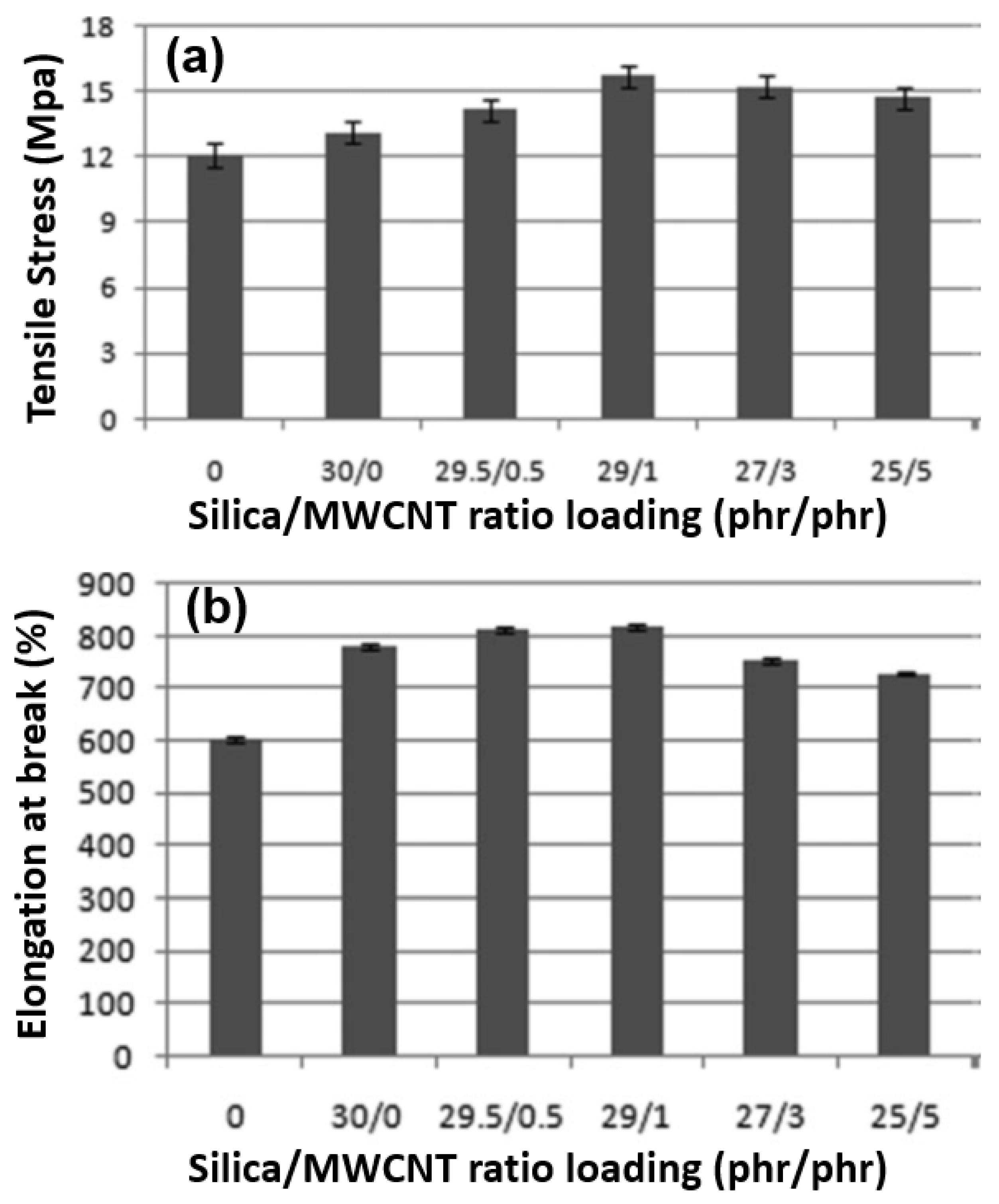 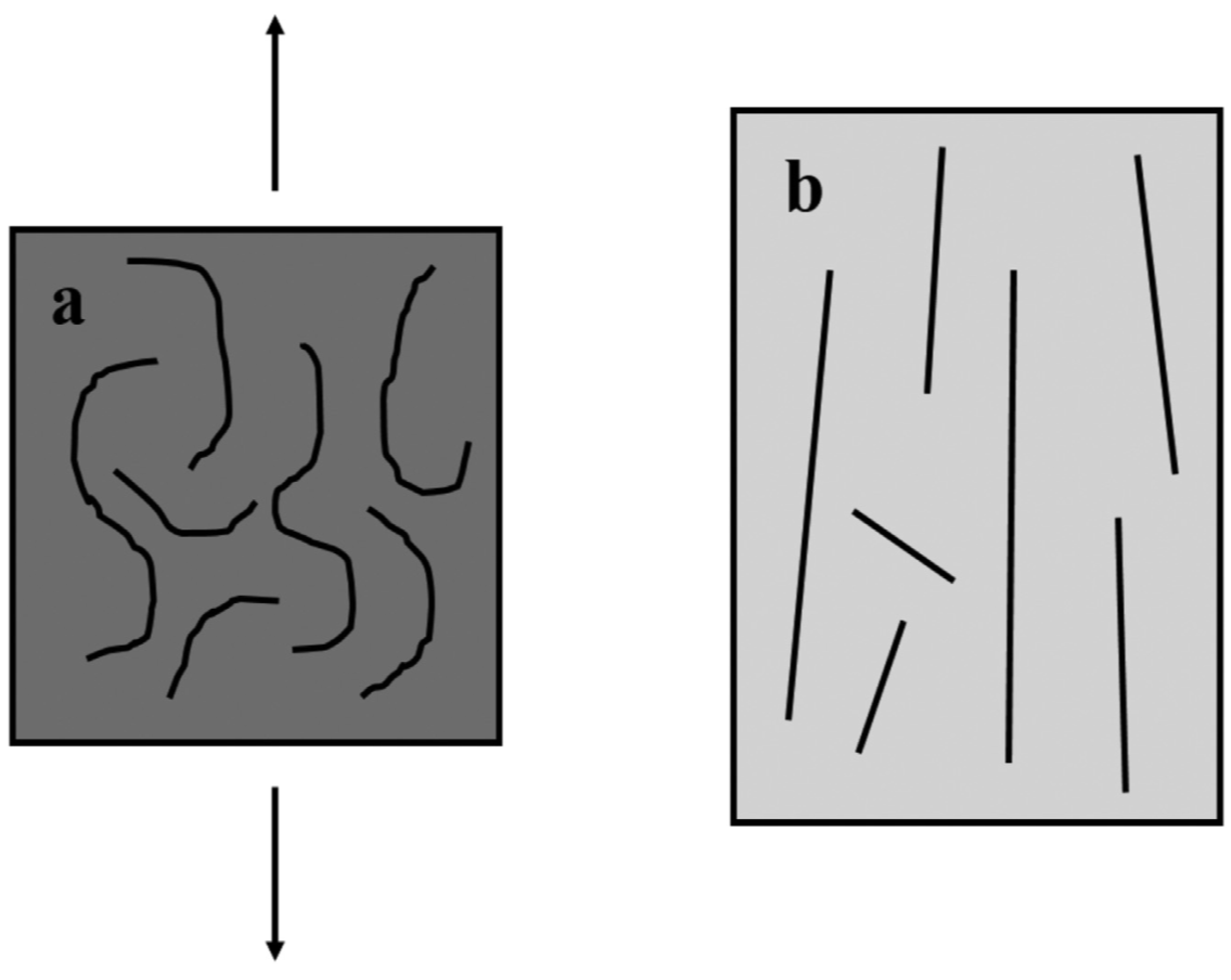 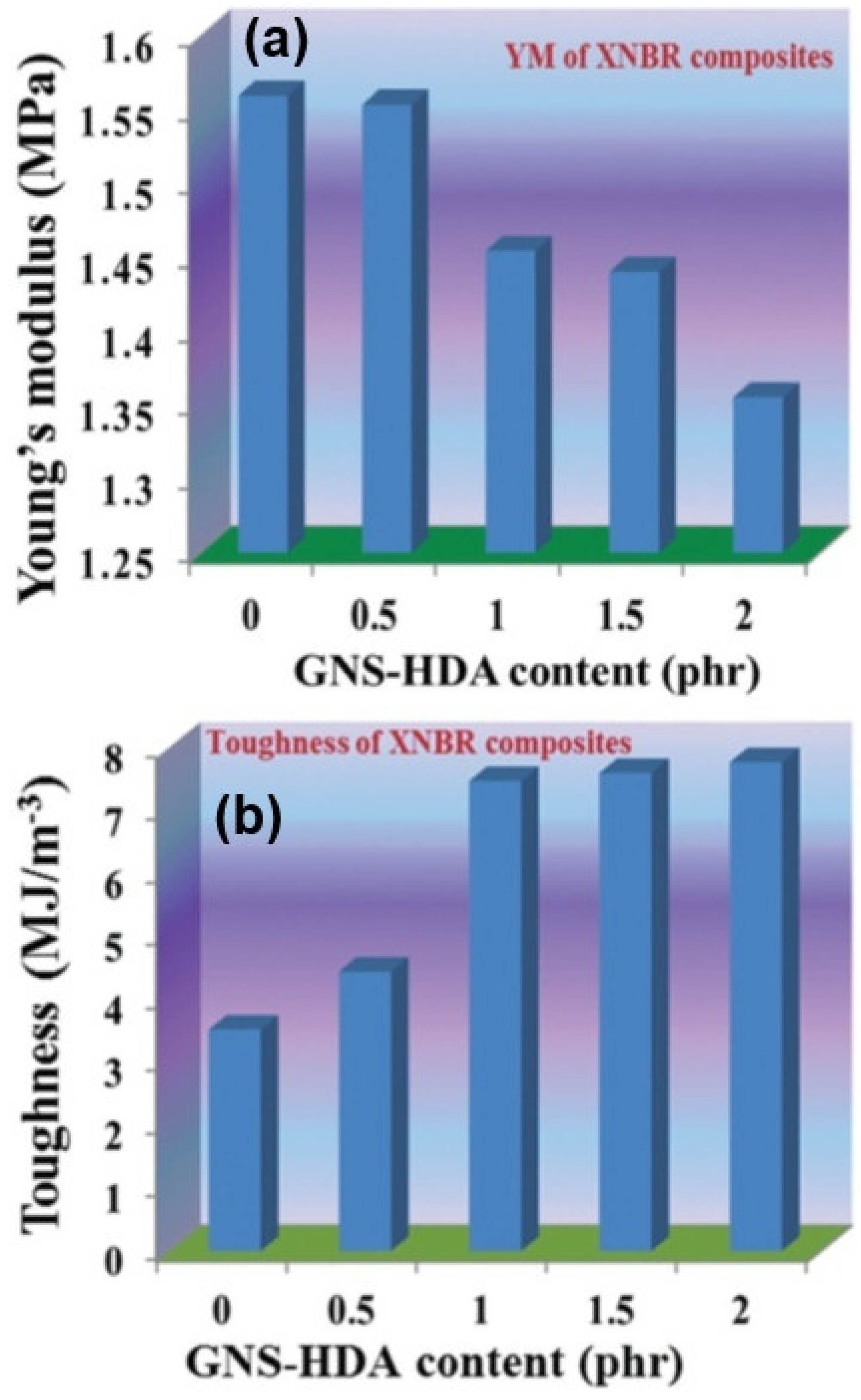 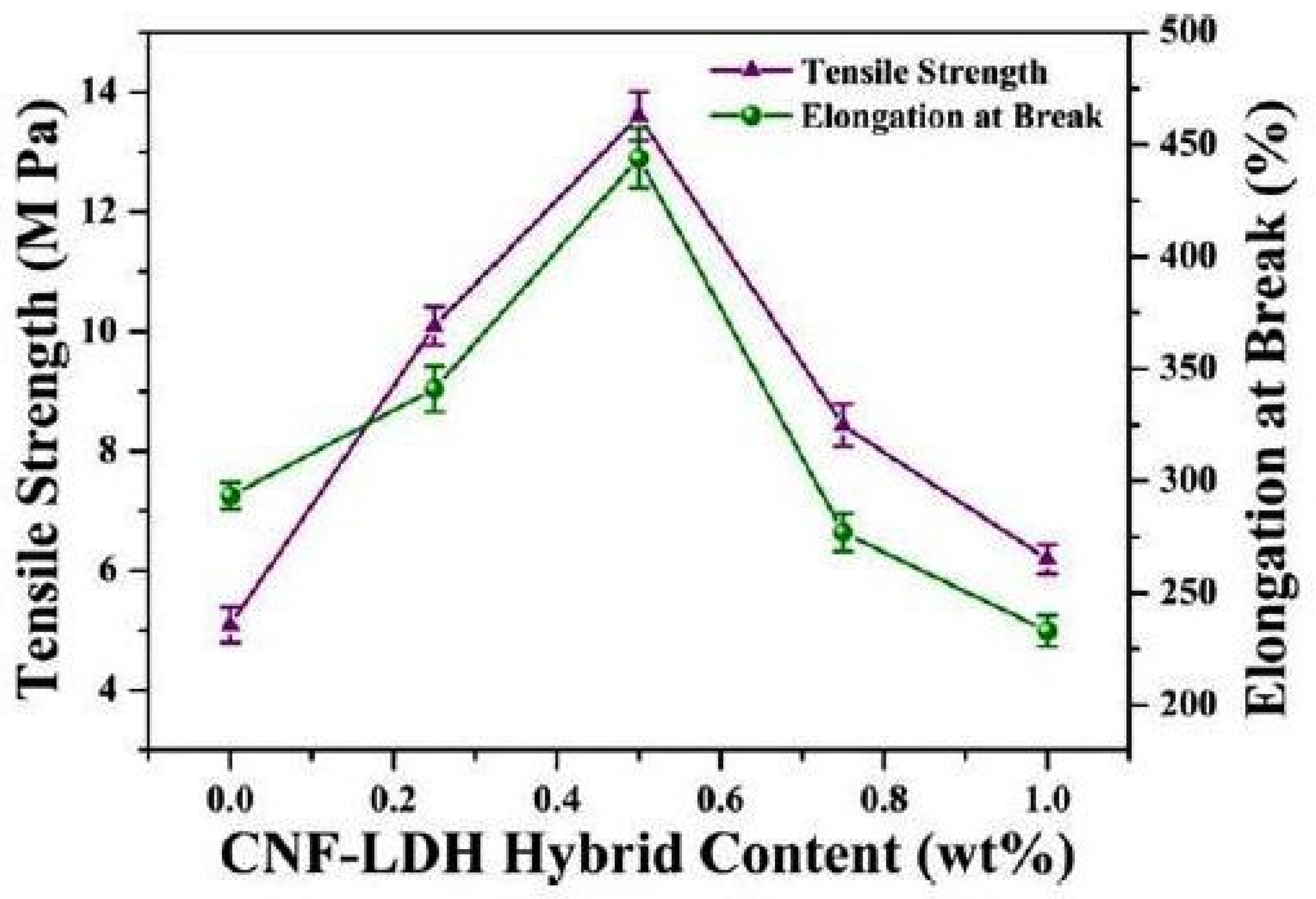 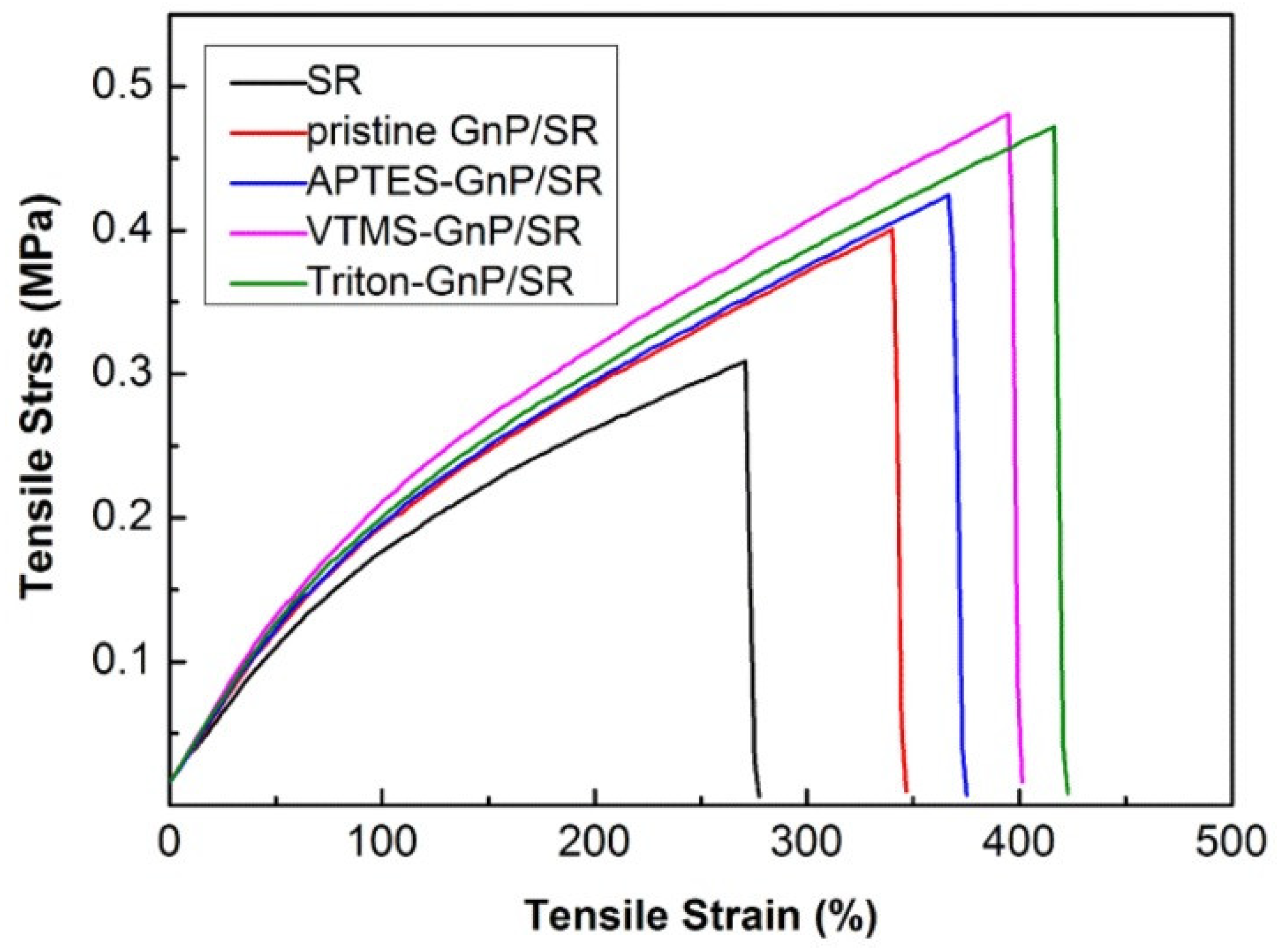 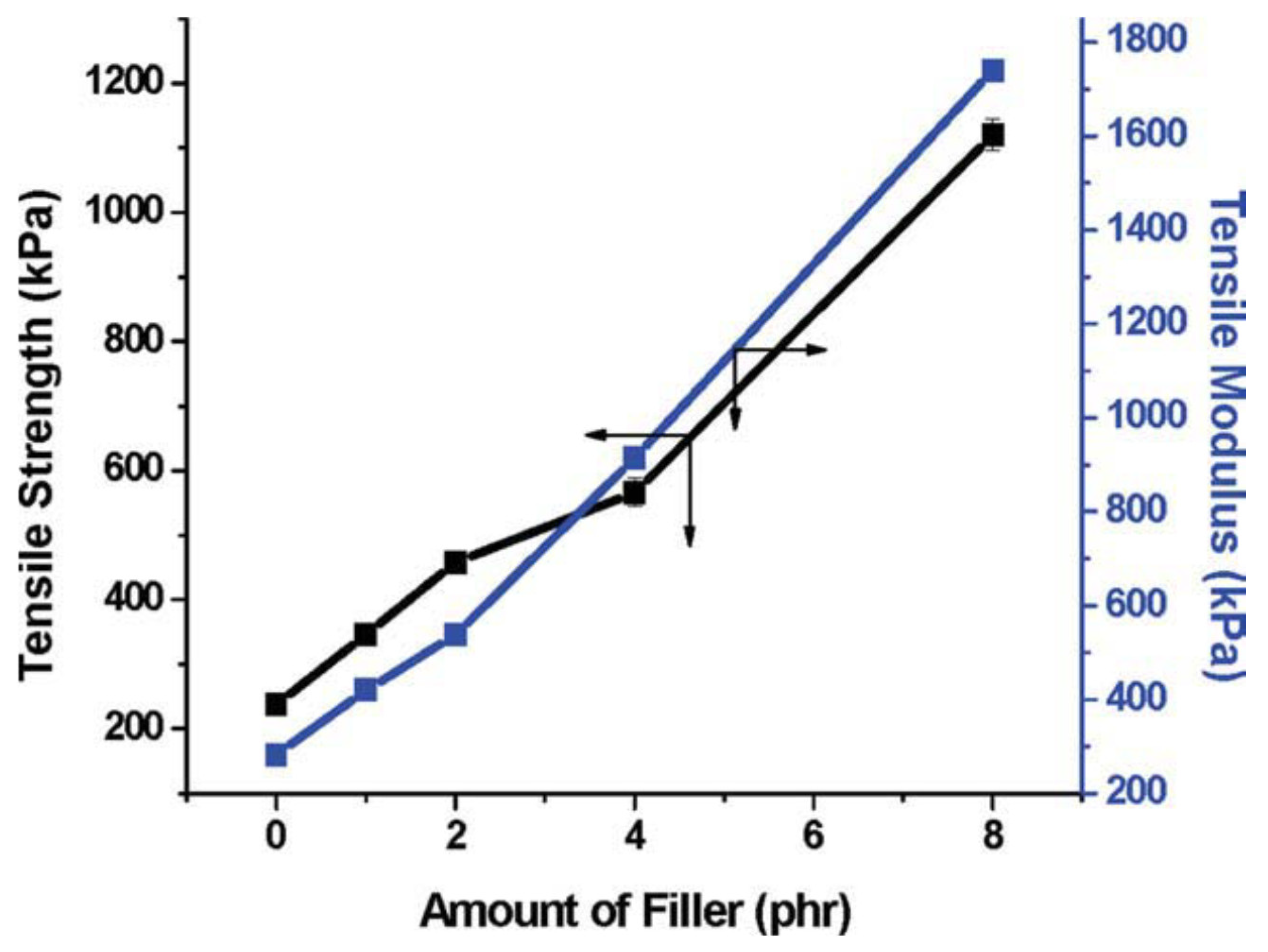