Magnetic Nanoparticles: From Design and Synthesis to Real World Applications
Next Article in Special Issue

Metal organic frameworks (MOFs) are crystalline porous organic-inorganic hybrid materials that consist of metal ions or clusters coordinated to organic ligands to form one-, two-, or three-dimensional structures [1,2]. They have attracted immense attention due to their outstanding features, such as ultrahigh porosity [3], large internal surface area [4], good thermal stability [5] and high chemical tailorability [6]. These properties make MOFs promising candidates for applications in gas storage [7,8], catalysis [9], drug delivery [10,11], semiconductors [12,13] and chemical sensing [14,15,16,17,18,19,20,21]. In order to impart sophisticated and nuanced chemical and physical properties to MOF materials, different functional groups should be introduced into MOFs. However, the preparation of highly functionalized MOFs has been largely limited to direct synthetic methods. Fortunately, post-synthetic methods have become an efficient way to achieve the chemical modification of MOFs due to the abundant and ready reactions of linkage ligand molecules [6].
Optical properties, which determine the application of optical devices in different fields, are the most significant properties of optical thin films. Recently, MOF-based thin films, in particular, optical thin films, have attract more and more attention, since they can potentially be used as active components (which can be easily regulated) in functional devices [22,23,24,25,26,27]. This is in contrast to the difficulty of tailoring the optical properties of conventional dense inorganic optical films. In 2010, G. Férey and coworkers [28] first described a simple route for the preparation of MIL-89 optical thin films by dip-coating. Then, they reported MIL-101(Cr) [29], MIL-100(Cr) [30] and MIL-100(Fe) [30] optical thin films. Redel et al. [31] presented the optical properties of surface-anchored metal-organic frameworks. Lu et al. [17] constructed zeolitic imidazolate framework (ZIF)-8-based Fabry-Pérot devices that function as selective sensors for chemical vapors and gases. Wu and coworkers [16] also fabricated three-dimensional MOF-based photonic thin films for vapor sensing. Hinterholzinger et al. [14] reported the first MOF-based one-dimensional photonic crystal (1DPCs), in which ZIF-8 was used as the active component. Ranft et al. [32] constructed tandem MOF-based photonic crystals for enhanced analyte-specific optical detection. Liu et al. [33] fabricated monolithic surface-anchored MOF Bragg reflectors for optical sensing. To improve the spectral shift of the photonic film when exposed to analyte vapors, in 2014, our group [18,34] first fabricated flexible MOF-based photonic films for sensing. Recently, Müller et al. [35] fabricated a photoswitchable nanoporous film by loading azobenzene in metal–organic frameworks of a type whose optical properties can be tuned by absorbed photo-responsive guests. The optical properties of MOF thin films can be changed by adsorbing different chemical vapors; however, it is impossible to sustain for an adequately long time for real uses in photonic devices. It is known that post-synthetic methods can cause a permanent and stable change of the ligands of MOFs, but to our knowledge, there is little research on tuning the optical properties of MOF-based optical thin films via such a facile method.
In this study, a post-modification method for tuning the optical properties of MOF thin films has been developed. A well-known MOF, NH2-MIL-53(Al) (MIL: Materials from Institute Lavoisier), composed of Al(III)-O clusters connected by 2-aminoterephthalic acid (H2N-BDC) units, were chosen as the model, and nanoscale NH2-MIL-53(Al) nanorods (NRs) were hydrothermally synthesized. The MOF optical thin film was fabricated by spin-coating alcoholic suspensions of NH2-MIL-53(Al) NRs onto the substrate. Three aldehydes with different lengths of carbon chains (Scheme 1) were chosen to tune the optical properties of the MOF thin films through the reaction with amine groups of MOFs. After post-modification, the color of the thin film showed an obvious change from purple to bluish violet and cyan. The reflection spectrum and the reflectivity also altered to different degrees. The effective refractive index (neff) of the MOF thin film was readily tuned from 1.292 to 1.424 at the wavelength of 750 nm. The success of post-modification and the degree of modification were characterized by X-ray photoelectron spectroscopy (XPS). The success of tuning of the optical properties of MOF thin film through post-modification will make MOF optical thin films meet the different required optical properties in various optical and optoelectronic devices.

2-Aminoterephthalic acid (H2N-BDC, 99%), Al(NO3)3·9H2O (97%) was purchased from J&K chemical (Beijing, China); propionaldehyde (C3), pentanal (C5) and heptanal (C7) were obtained from Macklin Biochemical Co., Ltd. (Shanghai, China). Other chemicals were provided by a local supplier. All chemicals and solvents were used as received.

NH2-MIL-53(Al) nanorods (NRs) were hydrothermally synthesized by adding sodium acetate according to the literature [36], with modification. The suspensions of NH2-MIL-53(Al) NRs were obtained by dispersing the NH2-MIL-53(Al) NR powder in ethanol (99.9%). The substrates were silicon wafers (2 cm × 2 cm) cleaned by detergent solution and piranha solution (H2SO4/H2O2, volumetric ratio 7:3). The wafers were dried in an oven after thoroughly rinsing with deionized (DI) water. After that, the optical thin films were fabricated by spin-coating 200 μL of NH2-MIL-53(Al) NRs in alcoholic suspensions (5.0 wt %) onto the substrate. The rotation speed was maintained at 2800 rpm for 60 s. Then, the films were heated in an oven at 200 °C for 20 min.

One piece of the optical thin film was cut into four equal slices using a diamond cutter. Then, the slices were put into a tubular furnace at 330 °C for 6 h before post-modification [27]. Three of the equal slices were immersed in a toluene solution of C3, C5, or C7 (0.1 M) at 90 °C for 12 h for post-modification. After completion of the reaction, the optical thin films were rinsed with toluene three times and dried in a vacuum at room temperature. For comparative analysis, the last remaining piece of the MOF film was soaked in pure toluene at the same time.

As shown in Figure 1A, NH2-MIL-53(Al) NRs of high quality in terms of their size were obtained according to the method reported by J. M. Chin et al. [36]. The particle sizes in length and width were about 44.8 ± 13.2 nm and 23.4 ± 3.8 nm, respectively, based on the TEM (Figure 1A and Figure S1). The particle size in ethanol was 43.8 nm, as measured by dynamic light scattering (DLS) method (Figure 1B). The length of the MOF NRs was shorter than that of previous report (107.5 ± 73.3 nm) [36], because of the reduction of sodium acetate from 5 times of Al(NO3)3·9H2O to 3 times. The NRs were further characterized by XRD, FT-IR, TGA and N2 adsorption-desorption isotherms (Figure 1C–F). The observed powder XRD pattern of NH2-MIL-53(Al) NRs was in good agreement with the simulated pattern [37], which confirms the formation of pure NH2-MIL-53(Al). Compared with the FT-IR spectrum of NH2-BDC, the bands of the protonated carboxylic groups at around 1710 cm−1 disappeared, indicating all of the carboxyl groups were coordinated with Al3+. NH2-MIL-53(Al) NRs exhibited good thermal stability up to 420 °C, which was consistent with a previous report [38]. The BET area of the NRs calculated between P/P0 0.01 and 0.25 was 560 m2/g. Accordingly, the total pore volume of NRs was 0.54 cm3/g. These results indicated that nanoscale NH2-MIL-53(Al) had been successfully prepared, and that NH2-MIL-53(Al) NRs have abundant pores and large specific surface area. This benefits the following modification.

The MOF-based optical thin films were fabricated by a spin-coating method according to our previous reports [18,34]. A photograph of an as-prepared MOF NR optical film is shown in Figure 2A. It shows a vivid purple color. The specular reflection spectrum of NH2-MIL-53(Al) optical thin film was evaluated as shown in Figure 2B. There is a Bragg peak centered at 430 nm, and the reflectivity is about 70%. The effective refractive index (neff) and extinction coefficient (k) of MOFs thin film was evaluated with ellipsometry from 400 nm to 1000 nm, and the obtained values for the MOF thin film as a function of wavelength are shown in Figure 2C. The prepared MOF thin film has an optical constant of n = 1.291 and k ≈ 0 at 750 nm. The SEM images (Figure 2D,E) show the NR optical thin film with a smooth surface and a uniform thickness of 301.3 ± 11.7 nm. It can be seen that there are some tiny gaps in the surface, which may be induced by tensile stress during the thermal annealing process. The low refractive index (RI) were mainly induced by the high intrinsic porosity of NH2-MIL-53(Al), and were also affected by the inter-voids between the NRs.

The MOF-based optical thin films with a uniform color were fabricated by spin-coating using a NH2-MIL-53(Al) NR solution. The color of the optical thin films can change from purple to cyan, and the corresponding reflection peak can red shift from 433 nm to 498 nm, and the reflectance can also decrease to a different degree after the modification. The key optical parameter refractive index can be tuned between 1.292 to 1.424 via modification with different aldehyde molecules. This is because the aldehyde molecules diffused into the inner pore of NH2-MIL-53(Al) to react with the amino of MOF ligands. In order to realize a precise regulation of the optical properties, the grafting rate can be regulated by controlling the modification reaction time. According to this study, MOF-based optical thin films with tunable optical properties will meet the different requirements of optical devices and have great potential applications in optical fields.

The following are available online at https://www.mdpi.com/2079-4991/7/9/242/s1, Experimental details, statistical histograms of sizes of MOF nanorods, generated and experimental Psi & Delta plots for MOF optical films before and after being modified, FT-IR and 1H-NMR spectra.

The authors thank the financial support from the National Natural Science Foundation of China (21203247 and 21573285) and research project of the National University of Defense Technology (ZK16-03-51). Thanks are also given to Changxu Lin from Xiamen University for the help with the TEM studies. The authors also thank LetPub (www.letpub.com) for its linguistic assistance during the preparation of this manuscript.

The manuscript was written through the contributions of all authors. All authors have given approval to the final version of the manuscript. 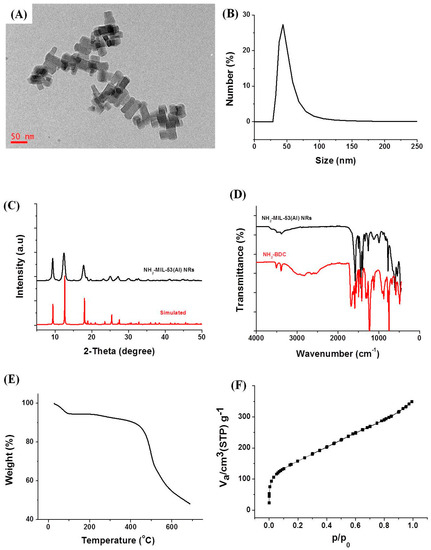 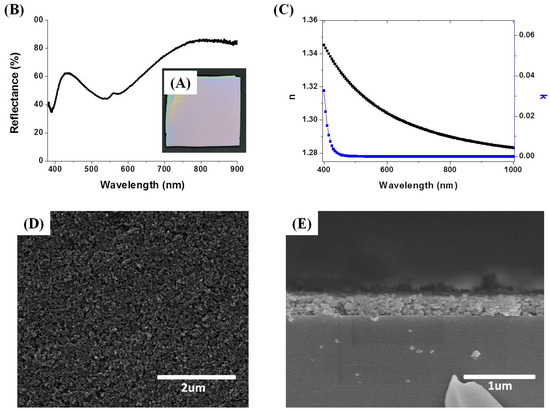 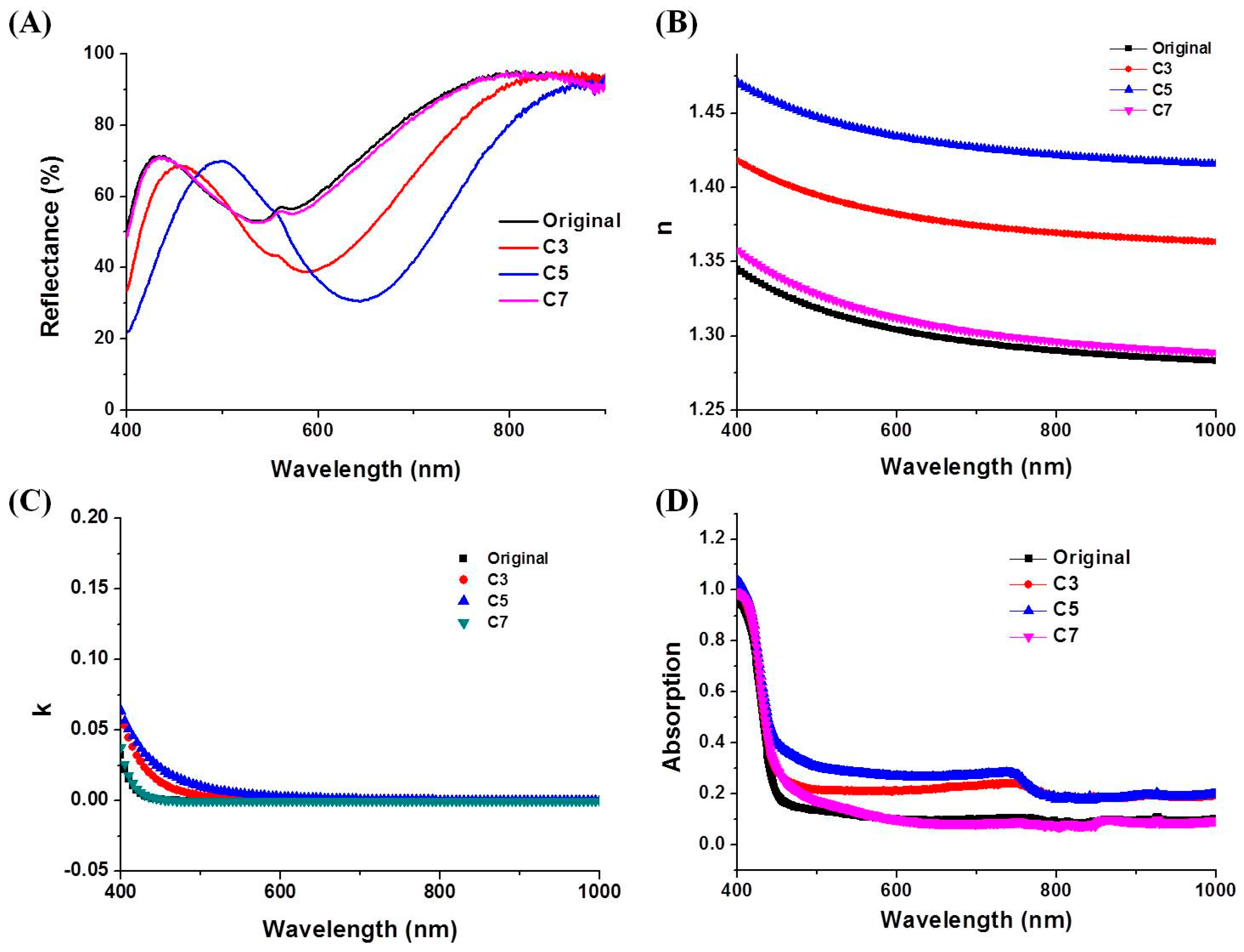 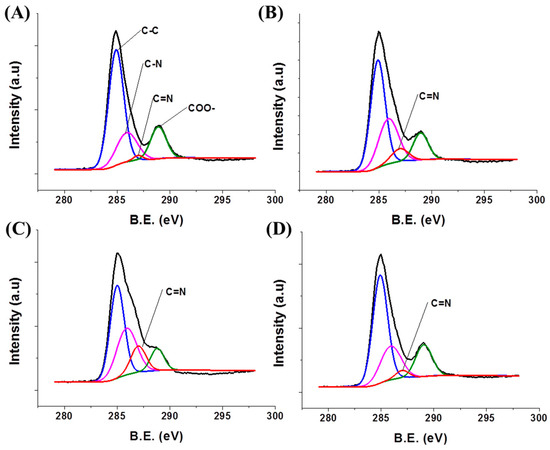 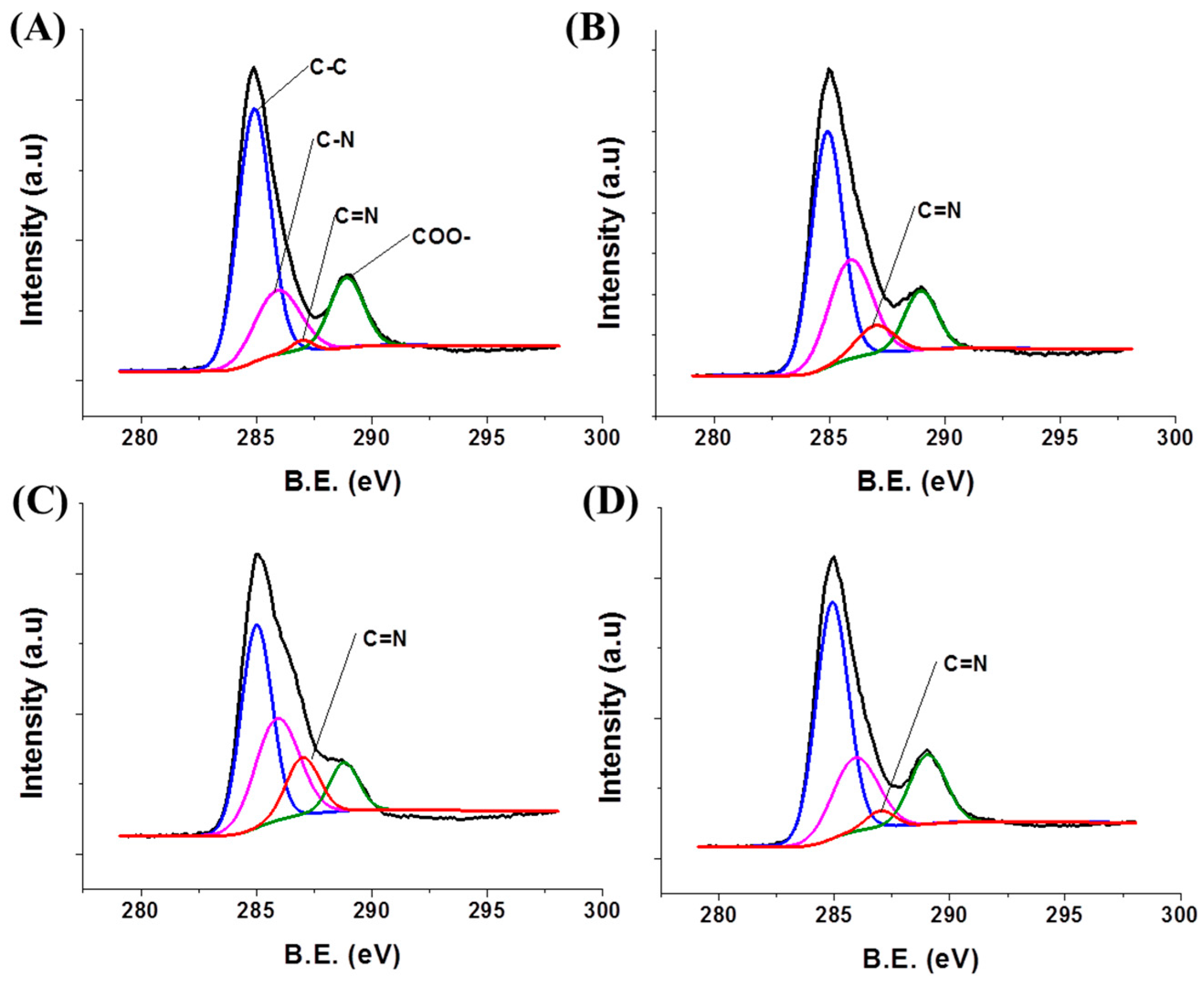 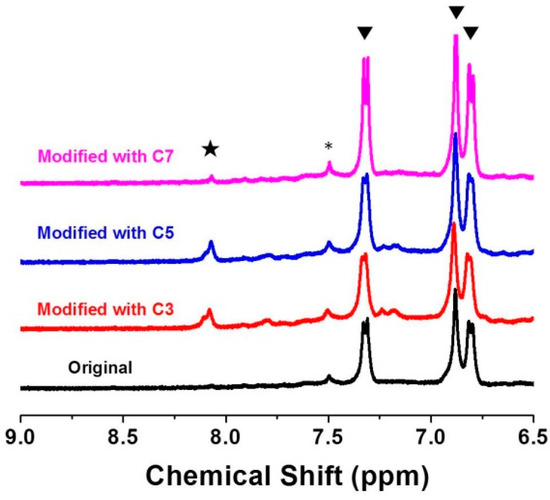 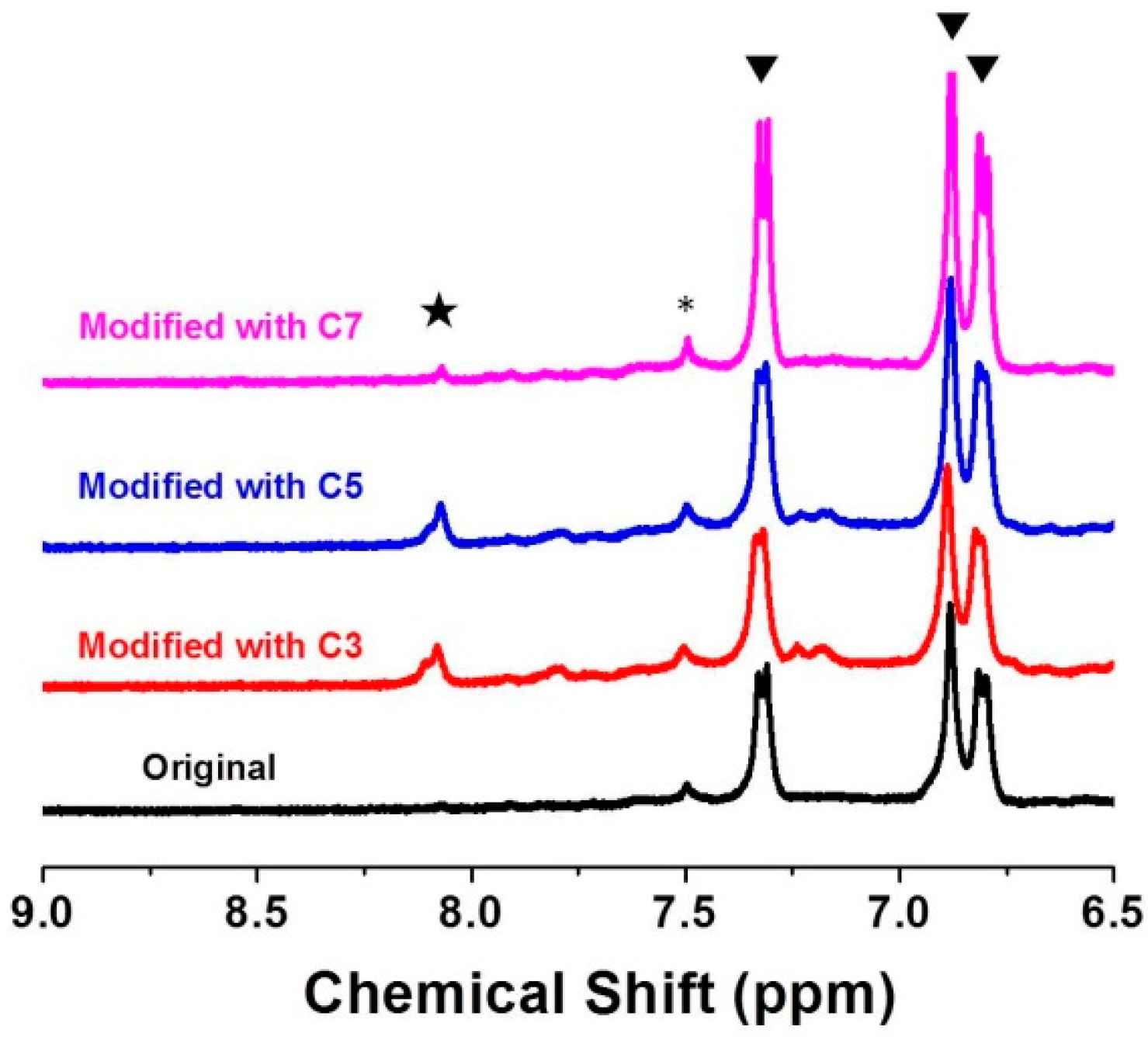