Influence of Nitrogen Doping on Device Operation for TiO2-Based Solid-State Dye-Sensitized Solar Cells: Photo-Physics from Materials to Devices
Next Article in Special Issue

Although small interfering RNA (siRNA) therapy has proven to be a specific and effective treatment in cells, the delivery of siRNA is a challenge for the applications of siRNA therapy. We present a degradable dextran with amine groups as an siRNA nano-carrier. In our nano-carrier, the amine groups are conjugated to the dextran platform through the acetal bonds, which are acid sensitive. Therefore this siRNA carrier is stable in neutral and basic conditions, while the amine groups can be cleaved and released from dextran platform under weak acid conditions (such as in endosomes). The cleavage and release of amine groups can reduce the toxicity of cationic polymer and enhance the transfection efficiency. We successfully applied this nano-carrier to deliver choline kinase (ChoK) siRNA for ChoK inhibition in cells.
Keywords: siRNA therapy; choline kinase; dextran; nano-polymer; siRNA delivery siRNA therapy; choline kinase; dextran; nano-polymer; siRNA delivery

Since the first application of small interfering RNA (siRNA) in gene knockdown, this technology has rapidly become a powerful tool in basic research [1]. The technology is being actively investigated for molecular-based therapeutic strategies in several diseases including cancer [2,3], inflammation [4], diabetes [5], and neurodegenerative diseases [6,7]. siRNA can enter the RNA-induced silencing complex (RISC), which induces enzyme-catalyzed degradation of their complementary messenger RNAs (mRNAs) in diseased cells, thus disrupting specific molecular pathways in various diseases [8]. Therefore siRNA has garnered considerable interest as a specific, safe, and potent therapeutic agent. However naked siRNA does not readily cross the anionic cell membrane through passive diffusion [9,10] because of its net negative charges on the phosphate backbone large size, and the high molecular weight. Hence the development of a safe and efficient siRNA delivery system still remains a critical challenge.
For the efficiency delivery of siRNA, a large number of carriers, such as viral vectors [11], cationic lipids [12,13], and polymers [14,15] have been explored. Despite high transfection capability, the applications of viral carriers are limited by serious immunotoxicity, mutagenicity and oncogenesis [9]. Therefore cationic polymers have attracted attention because of low cost, easy synthesis and modification. Cationic polymers can efficiently assemble with siRNA through electrostatic interaction, and this positively charged condensed complex can enhance cellular uptake and siRNA-mediated gene-silencing [10]. However, such complexes with high positive surface charge often induce an inflammatory response that causes severe toxicities in vivo and in vitro [16,17]. Therefore it is important to develop a safe and efficient carrier for siRNA delivery.
Here we present an imaging reporter labeled dextran-based biodegradable nano-polymer based on dextran as a safe carrier for choline kinase (ChoK) siRNA cancer therapy. ChoK overexpression and increased activity have been observed in malignant cells and tumors of the lung, colon, breast, prostate, and ovaries [18,19]. Therefore ChoK is an excellent target for cancer gene therapy, and ChoK siRNA therapy has been investigated for cancer treatment in preclinical models [20,21]. Dextran has been used as a polymeric carrier because of its wide availability, biodegradability, and ease of modification [22]. The potential application of dextran for siRNA delivery has recently been demonstrated [23,24,25,26]. Amine function groups, which provide the positive charge to bind with siRNA through electrostatical interaction, were conjugated to the dextran platform through acetal bonds. Acetal bonds are attractive because of the breakage of the bond under acidic conditions, which exist at various diseased sites such as tumors and inflammation, as well as inside endocytic compartments [27]. Therefore the amine groups can be cleaved from the dextran backbone and are rapidly released from the cells. The elimination of amine groups can minimize the inflammatory response and the toxicity of cationic dextran siRNA carriers. The labeled imaging probe provides the potential to use the nano-carrier as a fluorescent theranostic nanoplex.

10 mg of compound 3 was dissolved in the desired pH value buffer, and incubated at 37 °C. After incubation, the solution was transferred into 15 mL molecular cut-off centrifugal filters (EMD Millipore, Billerica, MA, USA) (MW 10 kDa) and spun at 3000 g for 15 min to remove the small molecules. It was washed with deionized water in this molecular cut-off centrifugal filter for 2 more times. Then it was frozen in liquid nitrogen, and lyophilized. After lyophilization, the dextran powder was dissolved in pH 7.4 PBS buffer to form 1 mg/mL dextran solution, and the absorbance at 530 nm was measured.

Human breast cancer MDA-MB-231 cells were obtained from American Type Culture Collection (ATCC) (Manassas, VA, USA). Fetal bovine serum, penicillin, and streptomycin were from Invitrogen (Carlsbad, CA, USA). Cells were maintained in RPMI 1640 (Invitrogen, Grand Island, NY, USA) supplemented with 10% fetal bovine serum in a humidified incubator at 37 °C/5% CO2. Cells were seeded at a density of 400,000 cells per dish in 6 cm dish (for RT-PCR experiments) or 8000 cells per well in 8 wells slide chamber (for confocal laser scanning fluorescence microscopy studies) 24 h prior to the transfection experiment. The siRNA/dextran RPMI 1640 medium solution (concentration of siRNA: 100 pmol/mL, N/P = 15) was added to each well or dish. Total RNA was isolated from MDA-MB-231 cells grown in 60mm dish by using QIAshredder and RNeasy Mini kit (Qiagen, Valencia, CA, USA) as per the manufacturer’s protocol. The expression of target RNA relative to the housekeeping gene HPRT1 was calculated based on the threshold cycle (Ct) as R = 2 − Δ(ΔCt), where ΔCt = Ct of target − Ct of HPRT1. The following primers against (a) ChoK-Fwd-5’-GAAAGTGCTCCTGCGGCTGTATG-3' and Rev-5’-CGGCTCGGGATGAACTGCTC-3', (b) HPRT1-the house keeping gene-Fwd-5'-CCTGGCGTCGTGATTAGTGATG-3' and Rev-5'-CAGAGGGCTACAATGTGATGGC-3' were designed using either Beacon designer software 7.8 (Premier Biosoft, Palo Alto, CA, USA) or a free web-based software Primer3Plus software (Premier Biosoft, Palo Alto, CA, USA) [32].

MDA-MB-231 cells in 8 well chamber slides were treated with siRNA/compound 3 nanoplex (concentration of siRNA: 100 pmol/mL, N/P = 15) for 1 h. After incubation, the transfection mixture was removed, and cells were washed twice with fresh medium. Cells were incubated in fresh medium for further observation. In endocytosis experiments, the cells were treated with endocytosis inhibitors for 45 min at 37 °C/5% CO2, following which the dextran nano-carrier was added into medium for a further 2 h incubation at 37 °C. Fluorescence microscopy images of MDA-MB-231 cells were generated on a Zeiss LSM 700 META confocal laser-scanning microscope (Carl Zeiss, Inc., Oberkochen, Germany). 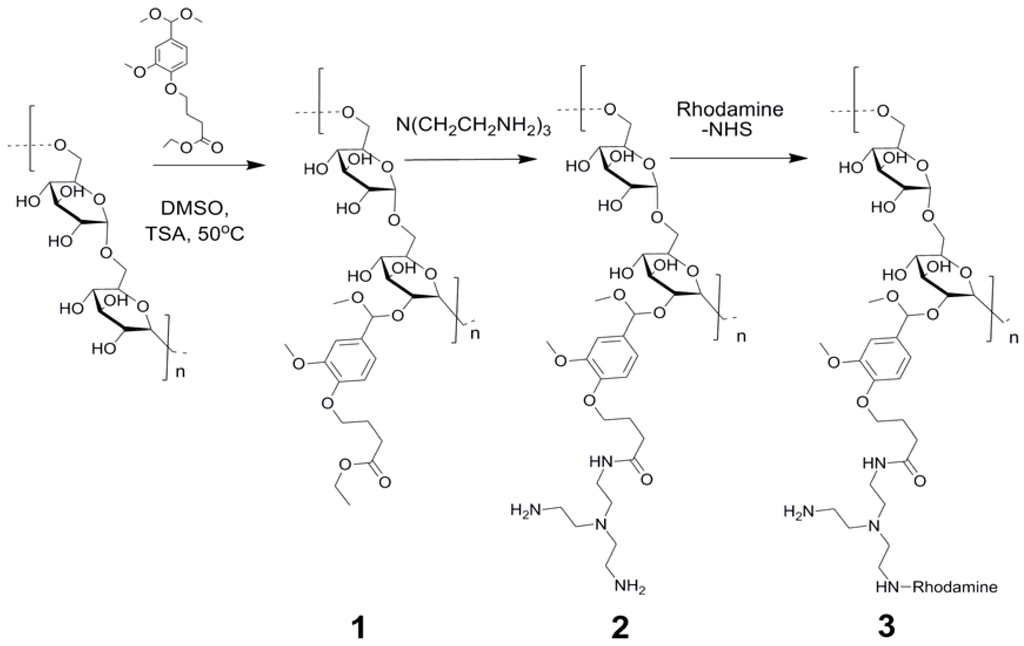 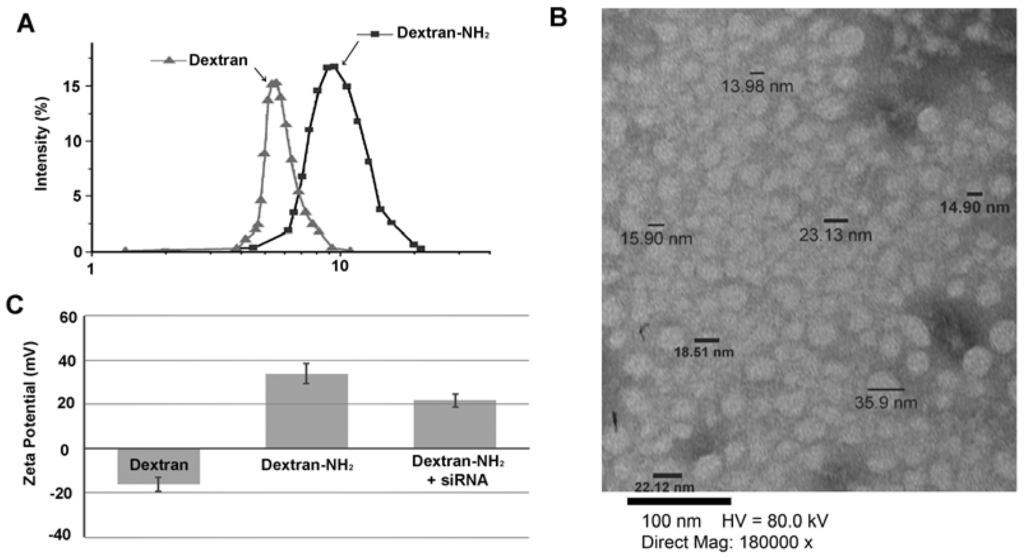 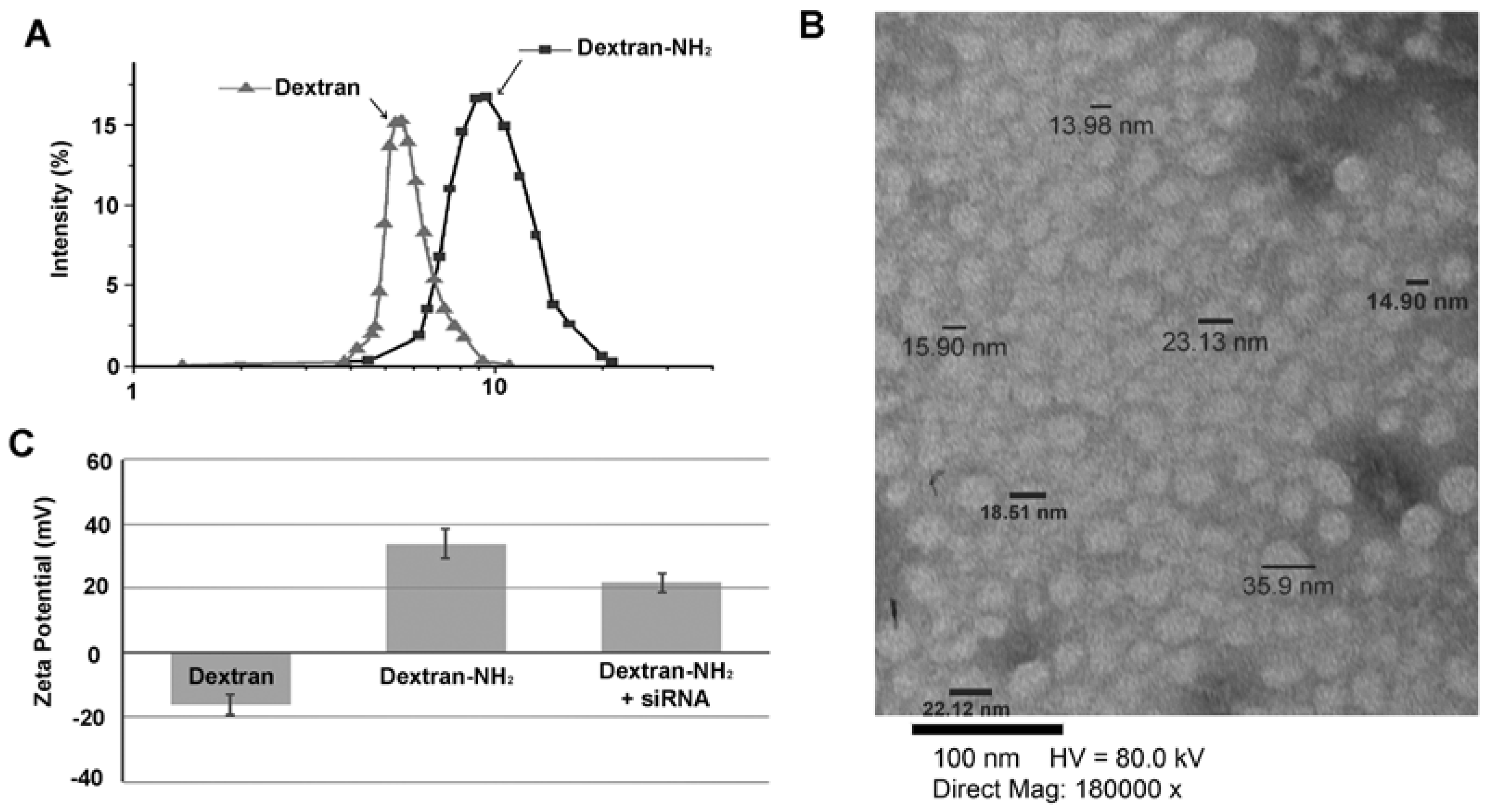