Synthesis and Application of Amine Functionalized Iron Oxide Nanoparticles on Menaquinone-7 Fermentation: A Step towards Process Intensification
Next Article in Special Issue

Significant efforts have been devoted towards using Si materials for high energy density Li ion batteries (LIBs) due to the high theoretical capacity and relatively low working potential of Si [1]. However, a fast capacity fading, caused by the large volumetric change of Si during cycling, and the poor rate capability resulting from the sluggish kinetics associated with Li ion and electron transport, limits its practical use [2,3]. Various strategies for engineering Si-based electrode configurations by manipulating the dimensions, geometry, and composition have been explored to overcome these problems. Previous works have demonstrated that utilizing nano-sized Si materials, including nanoparticles [4], thin films [5], and nanowires [6], are effective for improving the cycle performance due to a relatively smaller absolute volume change and facile stress relaxation during cycling, compared to that of bulk Si [4,5,6]. Porous Si materials, such as Si nanotubes [7], double-walled silicon nanotubes [8], and a Si inverse opal structure [9], have also been extensively explored. Free space in these porous structures and their high surface area improved the electrochemical properties due to the facile accommodation of the large volume change associated with Li ions and the enhanced Li ion kinetics [10]. Although nanostructured Si materials showed promise in improving the electrochemical properties, their practical use in commercialized LIBs has been limited due to their high cost, significant undesirable side reactions caused by the large surface area, and the low volumetric capacity resulting from the low tap density [11].
Recently, a Si-Ti-Ni (STN) alloy has received significant attention as a promising Si-based anode material for commercial applications. The nano-sized Si particles were incorporated into the micro-sized nickel-titanium (Ni-Ti) alloy matrix, which was inactive to lithium and has highly elastic characteristics. These physicochemical properties of the STN alloy enable stable cycle performance resulting from (i) effective accommodation of the volume change of embedded Si nanoparticles in the Ti-Ni alloy matrix, (ii) suppression of the side reaction by preventing direct contact between the Si and the electrolyte, and (iii) high tap density due to the large STN particles. However, the native oxides formed on the STN alloy surface, including SiOx, TiOx and NiOx, cause degraded electrochemical properties, including poor rate capability and low initial coulombic efficiency [12,13]. In a previous study, we demonstrated that a nitridated STN alloy electrode exhibited improvements in rate capability, cycle retention, and reversible capacity due to the enhanced electrical conductivity and mechanical strength caused by the nitride compounds formed on the STN surface [14]. However, the improvement in the electrochemical properties of the nitridated STN electrode was limited due to the use of insulating binders and the localized contact points between the STN particles for electron transport, which limited the free space in the electrode available to accommodate the volume change [15,16]. Furthermore, the necessity of a heavy current collector for electrode preparation induced a significant decrease in the energy density [17]. Further improvements in the electrochemical properties of STN electrodes were necessary for practical use.
Here, we report freestanding reduced graphene oxide (rGO)/single wall carbon nanotube (SWNT)/STN particle composites, prepared by a simple vacuum filtration method, as anodes for high power and energy densities LIBs with robust performance. Graphene has been extensively explored as an electrode component for rechargeable energy storage devices [18,19]. Its two-dimensional geometry, high electrical conductivity, and excellent mechanical properties enable the stable dispersion of STN particles, the enhancement of electrical conductivity over the electrode, and suppression of STN particle pulverization during cycling, leading to significant improvements in electrochemical properties of STN electrodes [20]. The SWNTs were employed in composite films to improve Li ion kinetics by enabling better electrolyte percolation into the composite film [21]. The excellent mechanical and electrical properties of the composite film originating from the rGO and SWNT networks allowed a freestanding electrode configuration without a metal current collector [21,22]. Our designed electrode configuration provided various advantages (Figure 1a) including: (i) improvement in the cycle performance by facile stress relaxation in the longitudinal direction, (ii) improvement in the rate capability by enhancing the kinetics associated with Li ion and electron transport, and (iii) an increase in the energy density due to the removal of the heavy metal current collector. Significant improvement in electrochemical performance, including reversible capacity, cycle retention, rate capability, and cycle performance, was achieved by employing the freestanding electrode configuration.

Figure 2 shows a photograph, an SEM image, and elementary mapping images for GO-SWNT-STN composites. As shown in Figure 2a, flexible and freestanding GO-SWNT-STN composite films were successfully prepared. The pristine STN powder had micro-sized diameter particles ranging from 1 µm to 10 µm. It was difficult to obtain a clear SEM image due to the charging effect caused by the low electrical conductivity of the GO-SWNT-STN composite film. The spatial distribution of C, Si, Ti, and Ni elements in the composite were analyzed using energy dispersive X-ray spectrometry (EDS) elemental mapping (Figure 2c–f). As shown, Si, Ti, and Ni signals originated from STN particles, and the C signal originated in the GO and SWNT. The intensity difference in the element signals was attributed to the different atomic ratios of these elements in the composite film. All elemental signals were uniformly distributed in the overall composite film, which suggested that STN particles were homogeneously embedded in the GO/SWNT matrix without agglomeration. This property was critical to achieving stable cycle performance and battery safety by controlling the volume expansion behavior of the electrode [18].

The morphology and microstructure of the rGO-SWNT-STN freestanding film was characterized using electron microscopy. Figure 3a,b is low-magnification and high-magnification SEM images of the rGO-SWNT-STN composite film, respectively. Very clear SEM images were obtained compared to that of the GO-SWNT-STN composite film due to the improved electrical conductivity of the composite film after the reduction of GO. We clearly observed that the STN particles were fully embedded in the rGO-SWNT composite networks. A good network geometry in the composite films is essential for improving both the mechanical and electrical properties. The wrinkled morphology on the surface of the STN particle was attributed to wrapping of rGO sheets around the particles (Figure 2b). Because of the intimate contact generated by this wrapping behavior, electrons could easily move along the rGO sheet on the surfaces of the STN particles. The microstructures of STN particles and rGO-SWNT-STN composite films were further characterized using a transmission electron microscope (TEM), as shown in Figure 3c,d. The different scattering abilities of each metal in the STN particle induced noticeable differences in the brightness between the Ti-Ni alloy matrix and Si domains, Figure 3c. Relatively dark and bright regions represent the Ni-Ti matrix and Si domains, respectively. It is clearly observed that STN particles formed a good network through the rGO sheet. High-magnification TEM images indicated the good dispersion of SWNTs in the composite film. SWNTs were anchored on the surfaces of both rGO and STN particles, which suggested that SWNTs could provide a continuous and effective electron pathway in the freestanding composite film. The strong mechanical properties of the rGO-SWNT networks were able to resist the large stresses caused by the large volumetric change associated with Li, leading to robust cycle performance [23]. 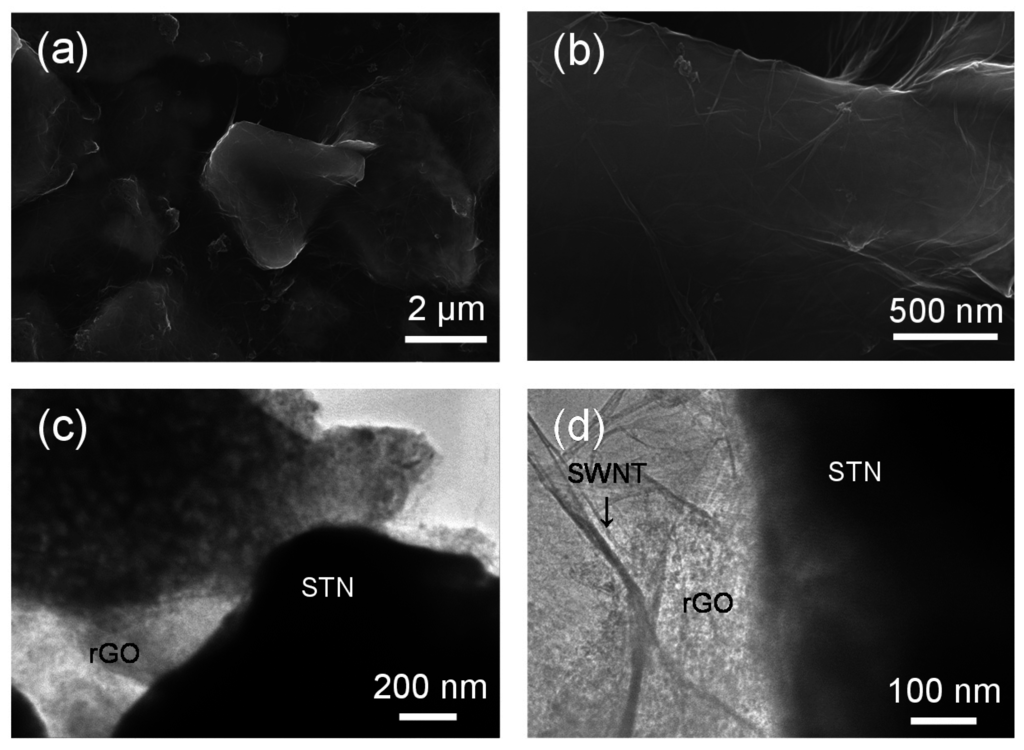 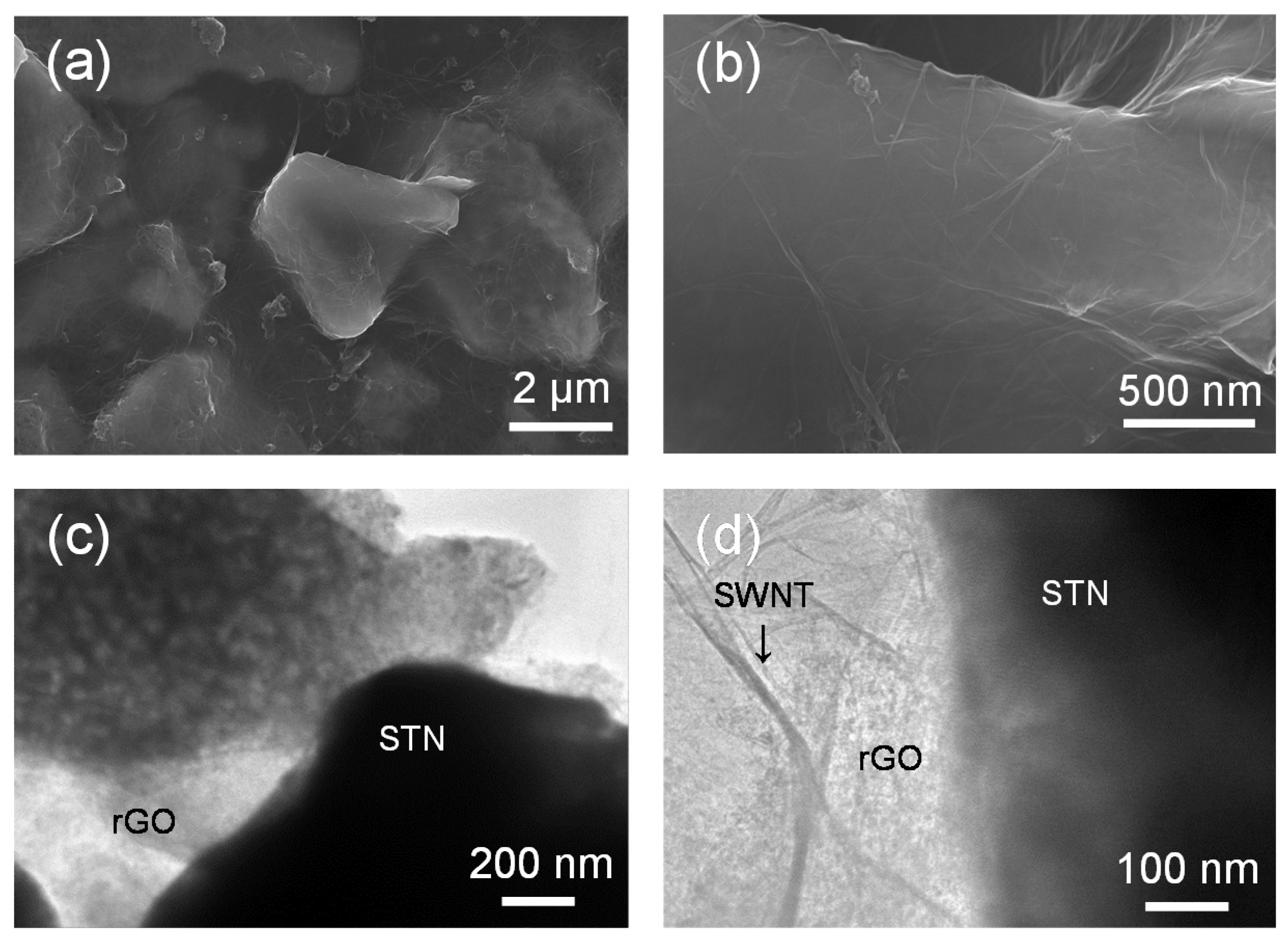 An X-ray diffractometer (XRD) and Raman spectroscopy were employed to investigate the effect of thermal reduction process on the physicochemical properties of the freestanding composite film. XRD results (Figure 4a) showed high intensity peaks related to the crystalline Si and Ni-Ti alloy. However, no noticeable change in the crystal phase was observed, which suggests that the mild annealing process did not induce crystallographic ordering of the STN particle. As shown in Figure 4b, two distinguishable peaks at 1588 cm−1 and 1345 cm−1, corresponding to a graphite band (G band) and a disorder band (D band), respectively, were observed in both composite films. The D band and G band are associated with a disorder induced phonon mode and defects/grain boundaries, respectively [24]. The rGO-SWNT-STN composite film exhibited higher D to G intensity ratios (ID/G ~ 0.79) compared to that of the GO-SWNT-STN composite film (ID/G ~ 0.20), which implies the successful reduction to rGO from GO [25]. The peak shift of the 2D band from 2661 cm−1 to 2671 cm−1 also provided evidence for the reduction of GO [26]. 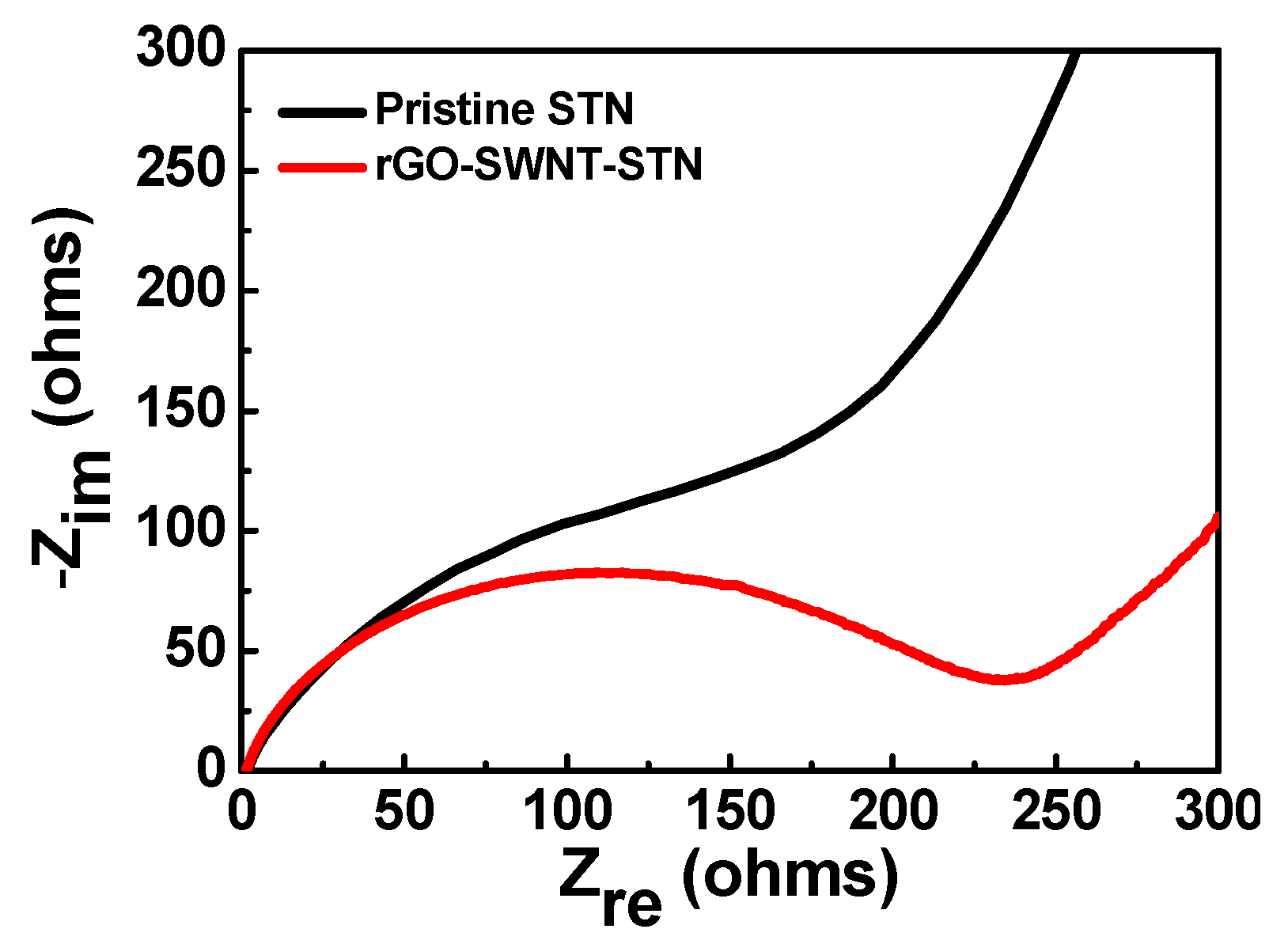 A SNT powder with an atomic ratio of 66% (Si), 17% (Ti), 17% (Ni) (MK Electron, Yongin, Korea) having a particle size distribution from 1 μm to 10 μm was used as a starting material. First, 0.004 g of SWNT, 0.004 g of graphene oxide, and 0.032 g of STN powder were dispersed in a 5 wt % sodium dodecyl sulfate (SDS, ACS Reagent, Sigma Aldrich, St. Louis, Missouri, USA) aqueous solution. Tip sonication was conducted to disperse starting materials for 20 min in an ice bath. The solution was filtered and washed with distilled water several times to remove residual SDS. After drying in a vacuum oven at 60 °C for 24 h, a freestanding film was obtained. Finally, a freestanding film was annealed at 300 °C for 1 h in a N2 atmosphere to reduce the graphene oxide.

A freestanding rGO-SWNT-STN composite was successfully prepared as an anode material via a facile filtration process, and its electrochemical properties were evaluated. The freestanding electrode configuration and the rGO-SWNT networks accommodated the large volume change, provided excellent mechanical properties, and showed favorable lithium ion and electron transport kinetics. These properties led to significant improvements in the electrochemical performance. The freestanding rGO-SWNT-STN composite electrode showed an increase in reversible capacity, a two-fold higher cycle retention at 50 cycles, and a two-fold higher rate capability at 2 C compared to those of pristine STN electrodes.

This work was supported by the Global Research Laboratory (GRL) Program (K20704000003TA050000310) through the National Research Foundation of Korea (KRF) funded by the Ministry of Science, ICT (Information and Communication Technologies) and Future Planning, and by the Energy Efficiency & Resources Core Technology Program of the Korea Institute of Energy Technology Evaluation and Planning (KETEP) funded by the Ministry of Trade, Industry & Energy, Republic of Korea (No. 20142020104190) and Human Resources Program in the Transportation Specialized Lighting Core Technology Development (No. N0001364) granted financial resource from the Ministry of Trade, Industry & Energy, Korea.

The authors declare they have no conflicts of interest to report.