:
In high-speed wireless communication, visible light communication is considered an emerging and cutting-edge technology. A light-emitting diode can serve both as an illumination source in an environment and as a data transmitter. Nevertheless, plenty of complications stand in the way of developing VLC technology, including the low response time of waveguides and detectors and the field of view dependence of such devices. To cover those challenges, one approach is to develop a superior optical antenna that does not have a low response time related to phosphorescence materials and should also support concentrating light from the surroundings with a wide field of view. This research paper presents an optimized cylindrical optical antenna with benefits, such as affordable cost, fast response time due to high-efficient nanomaterials, and a wide field of view (FOV). The proposed structure avoids the need for intricate tracking systems and active pointing to the source, but it can also be integrated into portable devices. For the analysis of nanomaterials’ characteristics, finite difference time domain simulations are used, and Monte-Carlo raytracing is used to study the proposed optical antenna. It was found that the antenna’s optical efficiency varies from 1 to 29% depending on the size and the number of nanomaterials inside. Compared to other works, this paper shows higher efficiencies and wider FOV.
Keywords:
VLC; OWC; optical antenna; FDTD; ray tracing; monte-carlo; quantum-dot

A glass cylinder embedded with core-shell Silicon Dioxide–silicon nanoparticles is subjected to white LED radiation in the proposed structure. A white LED usually contains a large band-gap material that emits the blue region of the visible spectrum and a layer of phosphorescence that acts as a down converter material such as Ce: YAG or phosphor. It should mention that the added QDs act as plasmonic nanoparticles, and their optical properties differ from those of Si QDs alone.
These LEDs have a peak emission of 450 nm, and the phosphorescence material down-converts some part of these photons to longer wavelengths around 550 nm (Figure 1).
Generally, in this structure, SiO2/Si nanoparticles absorb the incident light from the cylinder’s lateral surface and then emit it respectively. The photons emitted by the nanoparticles (through the TIR phenomenon) will be able to reach the edges of the cylinder where the photodetectors are located due to their change in the mean free path length of the incident photons. Finally, the absorbed photons by photodetectors are converted into an electrical signal (Figure 2).
It should be mentioned that high-speed communication within VLC is directly related to the fast response of the materials used in the equipment. Although direct band-gap materials, such as GaAs, can achieve higher frequencies in VLCs, it is important to remember that VLCs have been developed to cover both broad bandwidth and low cost. In consumer-level VLC applications, using direct band-gap materials is not economical. Despite this, the decay time of SiO2/Si QDs is in the nanosecond range, which could provide the bandwidth required for VLCs.
In this structure, different events for each photon can occur. Since two media (air and glass) have different refractive indices, the incident photon may be reflected from the surface of the cylinder in the first place. If the photon is not reflected, it enters the structure and may be absorbed by the nanoparticle or hit the surfaces and the phenomenon of total internal reflection occurs or pass through the structure. The absorbed photon by the nanoparticle may not be emitted; thus, the absorption loss happens. If the nanoparticle emits the photon, one of the following three phenomena will occur: First, the photon hits the structure surfaces at an angle smaller than the critical angle, so it escapes. Two, the photon hits the structure surfaces at an angle greater than the critical angle, so the TIR phenomenon occurs. Three, the photon is re-absorbed by the other nanoparticle, for which this mechanism is known as re-absorption.
Different events in Figure 3 for incident photons can be described as follows: [37]

To calculate the absorption and emission spectra of the nanoparticle, we placed the SiO2/Si nanoparticle in a medium with a background refractive index of SiO2 (1.46) and exposed it to planar source radiation ranging from 300 to 800 nanometers. Then, we obtained the nanoparticle absorption and emission spectra for its different dimensions employing the FDTD (finite-difference time-domain) method. Figure 4 and Table 1 represent the FDTD region and its related parameters, respectively.
As shown in Figure 4, several areas in an FDTD simulation analyze the absorption and scattering curves of a nanoparticle. In the list below, one can find an explanation of each area in Figure 4. Table 1 also describes the parameters used in the FDTD analysis, including their dimensions.

In the CIE-1931 color space, the distributions of wavelengths in the visible electromagnetic spectrum are quantitatively linked to colors as humans perceive them. In color management, which includes issues such as displays, cameras, and, in our case, optical antennas, there are mathematical relationships that define the distinct color spaces in CIE-1931 format. It is necessary to have mathematical relationships for color management to function effectively and for optical antennas to be highly efficient.
A standard observer’s chromatic response is modeled using the CIE color-space by mapping wavelength power spectra to an ensemble of stimulus values, X, Y, and Z, representing the actual response of the three types of cone cells in the eye. Equation (16) shows the relationships between the chromatic response of the material and the different values that X, Y, and Z could get and Figure 14 shows wavelength dependency of X, Y, and Z.
With Equation (17), it is possible to normalize the X, Y, and Z values (although it may lose information regarding the brightness (amplitude) of the light).
Therefore, two parameters can be used to describe the color of light, x, and y.
Figure 15 illustrates the chromaticity diagram based on the CIE standard, illustrating the spectrum of white LED (from Figure 1) and that of a proposed SiO2/Si Quantum Dot with a radius of 85 nm. It is evident in Figure 15 that both the transmitter (white LED) and the receiver (SiO2/Si QDs inside glass substrate) have similar color representations, and this can aid in constructing an optical antenna with greater efficiency.

This work aimed to demonstrate a new structure for optical antennas for visible light communication (VLC) usage. There should be attributes such as simplicity, speed (short response time), sensitivity in all directions of incidence, relatively small size, and low price. Due to its proposed structure, this antenna is designed with a large field of view and a high signal-to-noise ratio. In this antenna, the host is a cylindrical glass substrate that is doped with specific Quantum Dots of SiO2/Si. An FDTD analysis was conducted on SiO2/Si quantum dots to determine their optimum size to be used as dopants inside the cylindrical substrate. An analysis of the absorption, scattering, and extinction cross sections of SiO2/Si QDs was carried out using the FDTD method. An optimal radius of 79 nm was determined for SiO2/Si nanoparticles that match the spectrum of source white LEDs. The SiO2/Si nanoparticle with this size shows absorption, scattering, and extinction cross sections of 6.65 × 10−14 m−2, 4.4 × 10−13 m−2, and 5.05 × 10−13 m−2. We numerically modeled the proposed optical antenna using the Monte-Carlo ray-tracing approach, and we reported the optical efficiency for a variety of substrate sizes and dopant concentrations inside the substrate.
Furthermore, the optical efficiency for the proposed structure was found to be in the range of 1 to 29% for various sizes and concentrations of dopants. The antenna substrate is doped with efficient SiO2/Si Quantum dots, which have a low relaxation time compared to phosphorescence-based LSCs, so that it could be applied to VLC applications demanding fast response times. A cylindrical surface and a wide field of view make it an excellent light-collecting antenna, liberating a VLC system from active light-tracking systems.
For future work, we will use different quantum dots to achieve better antenna performance for different visible band wavelengths. In this way, multiple users in a nearby area could use VLC with the antenna via wavelength division multiplexing.

The study has been supported by the ASEPE Company, Tabriz, Iran. 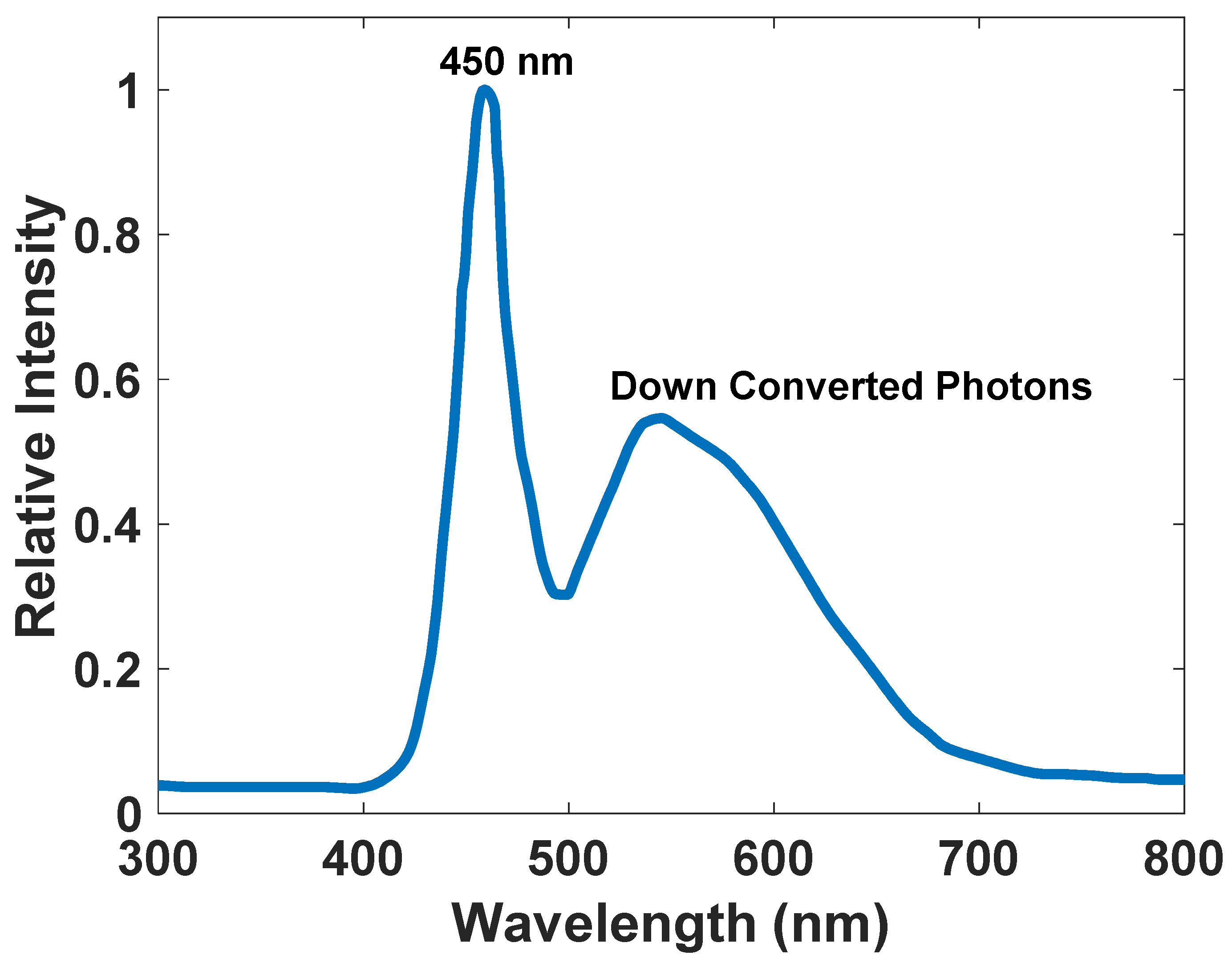 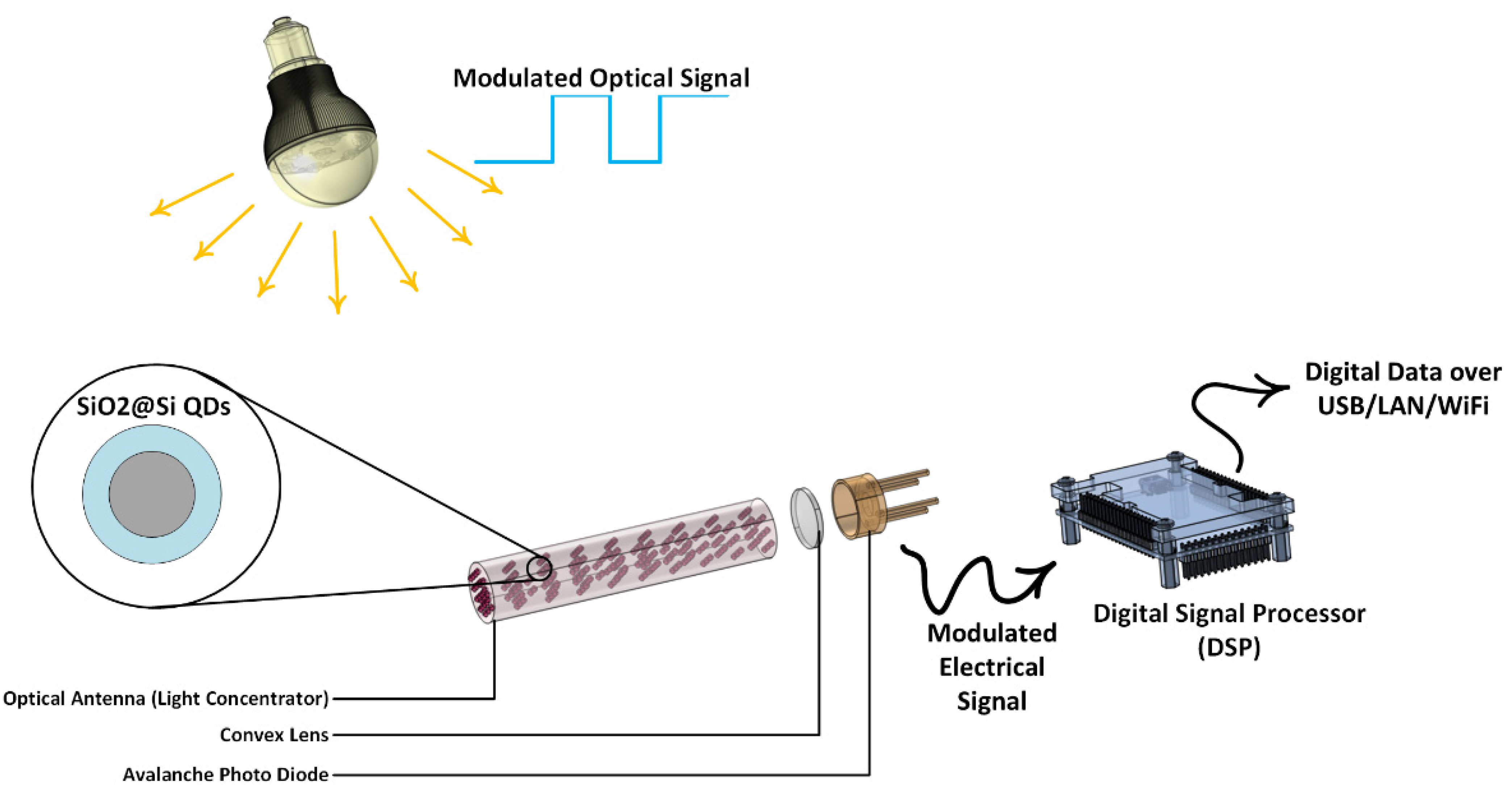 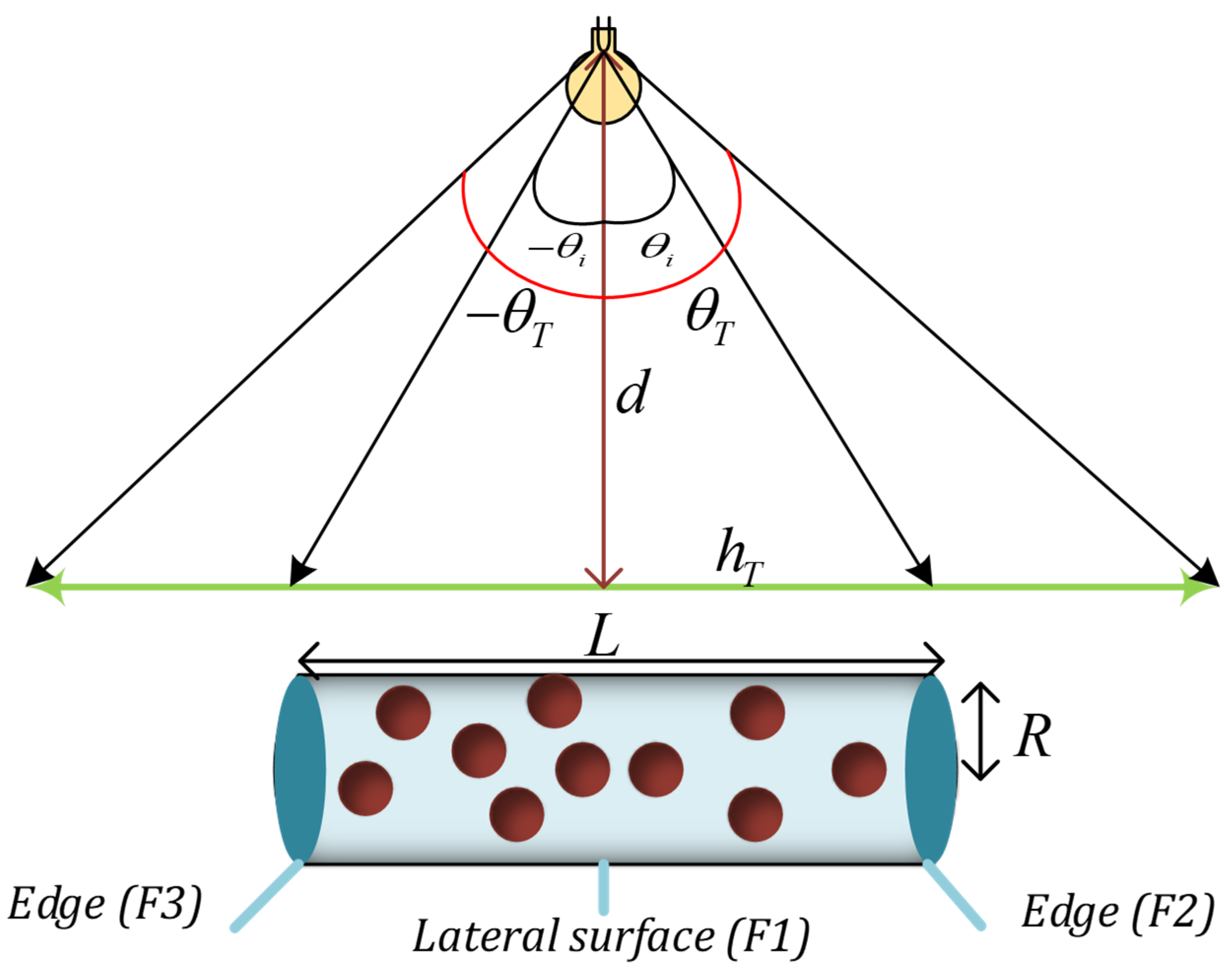 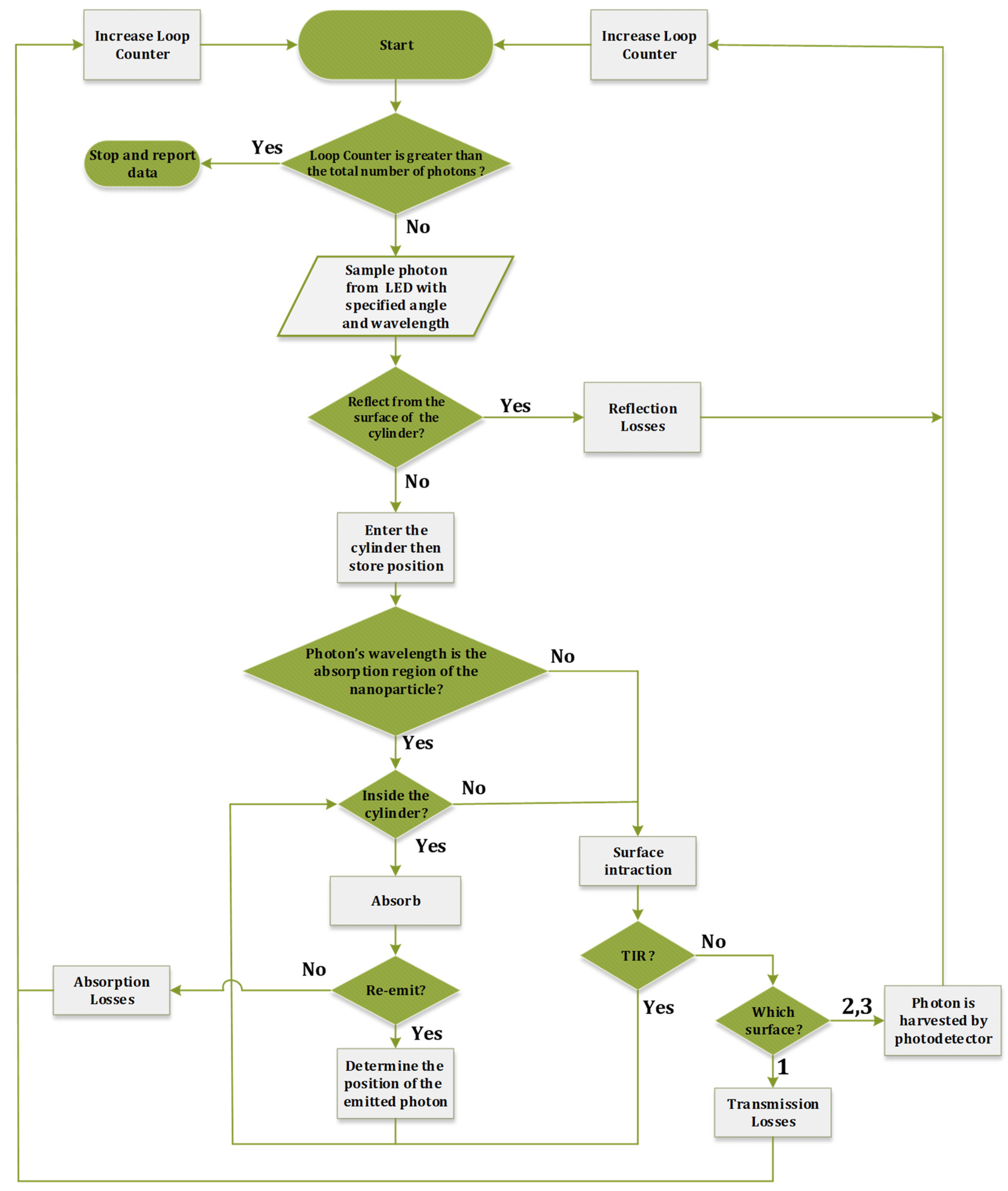 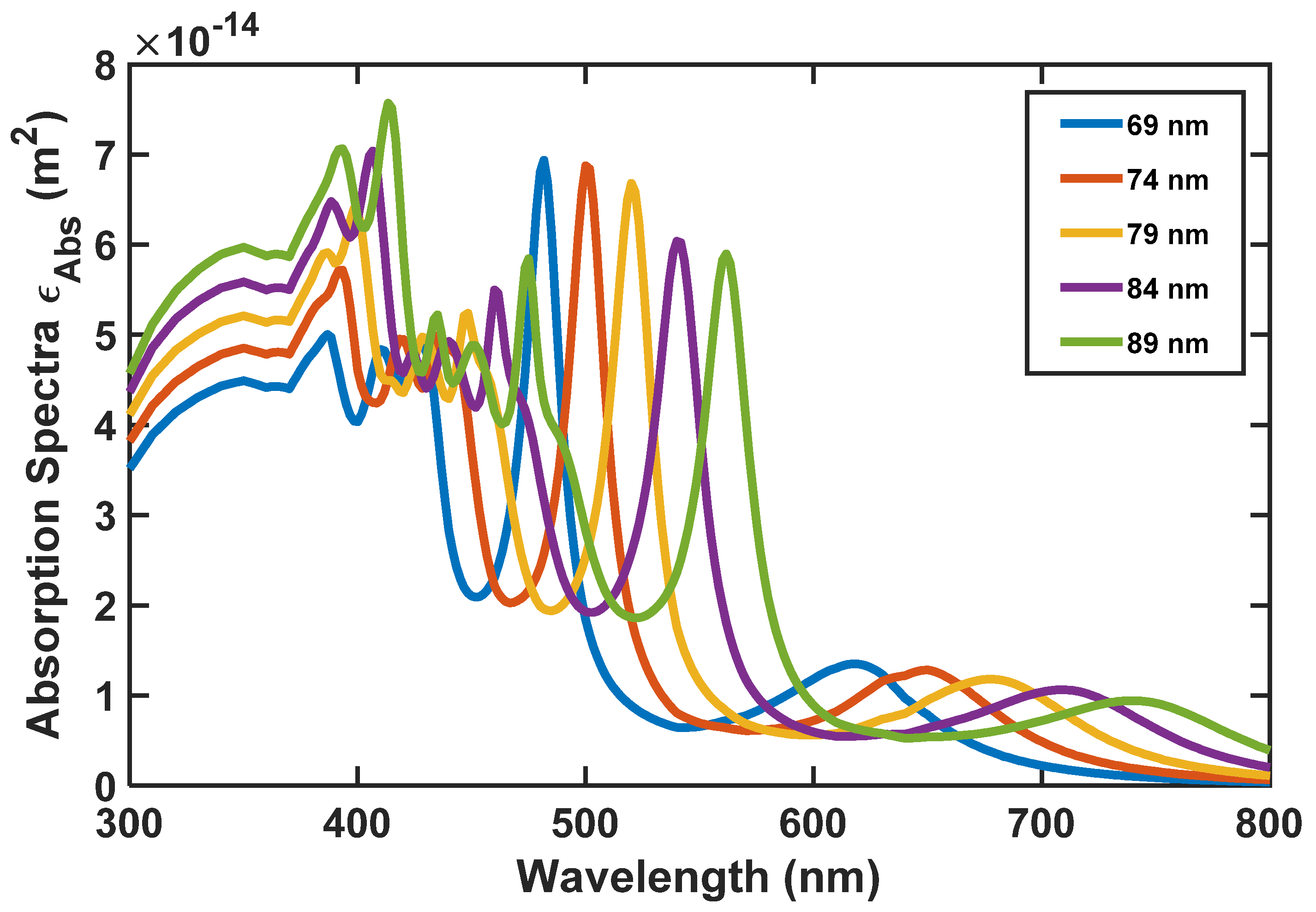 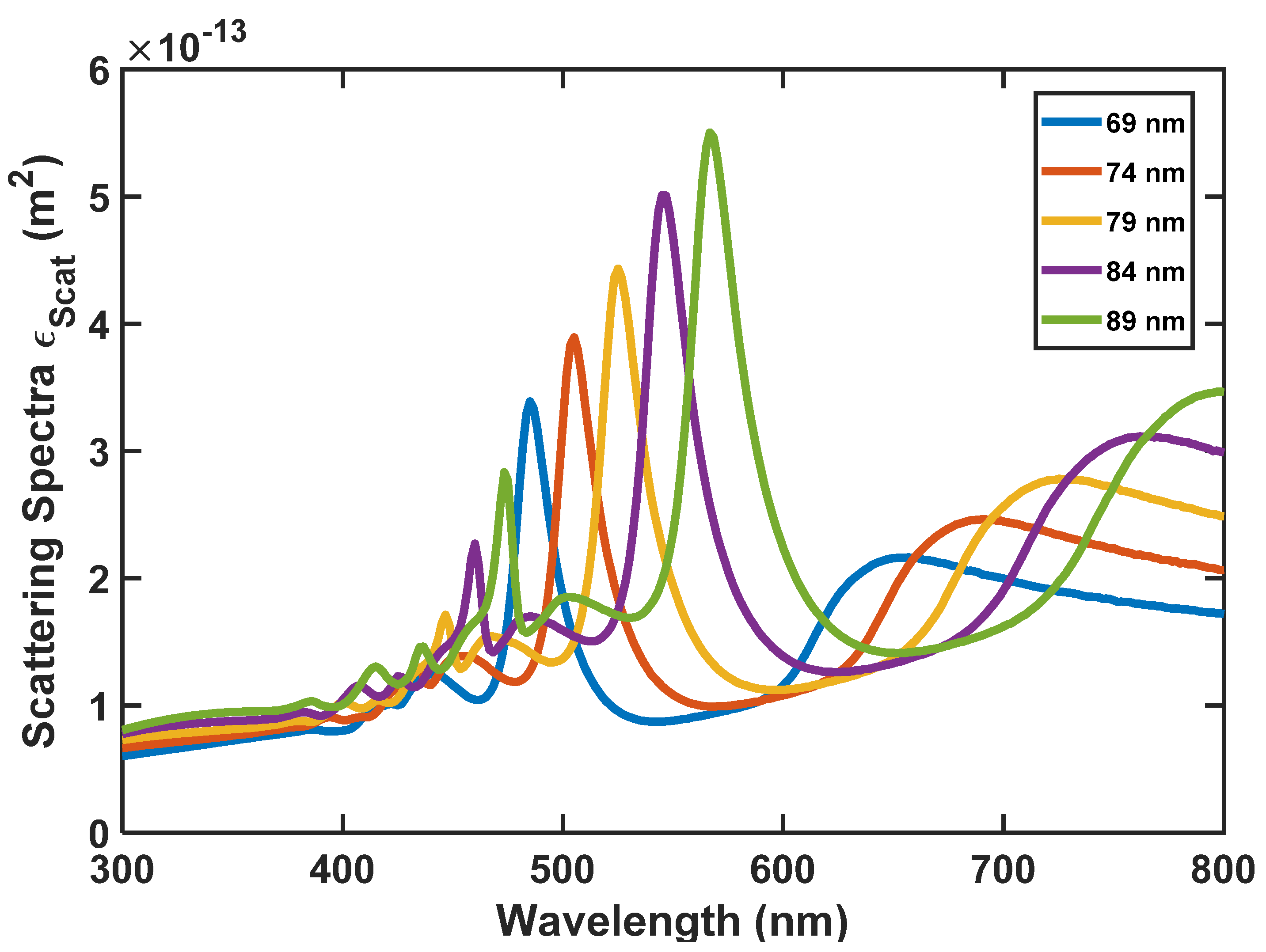 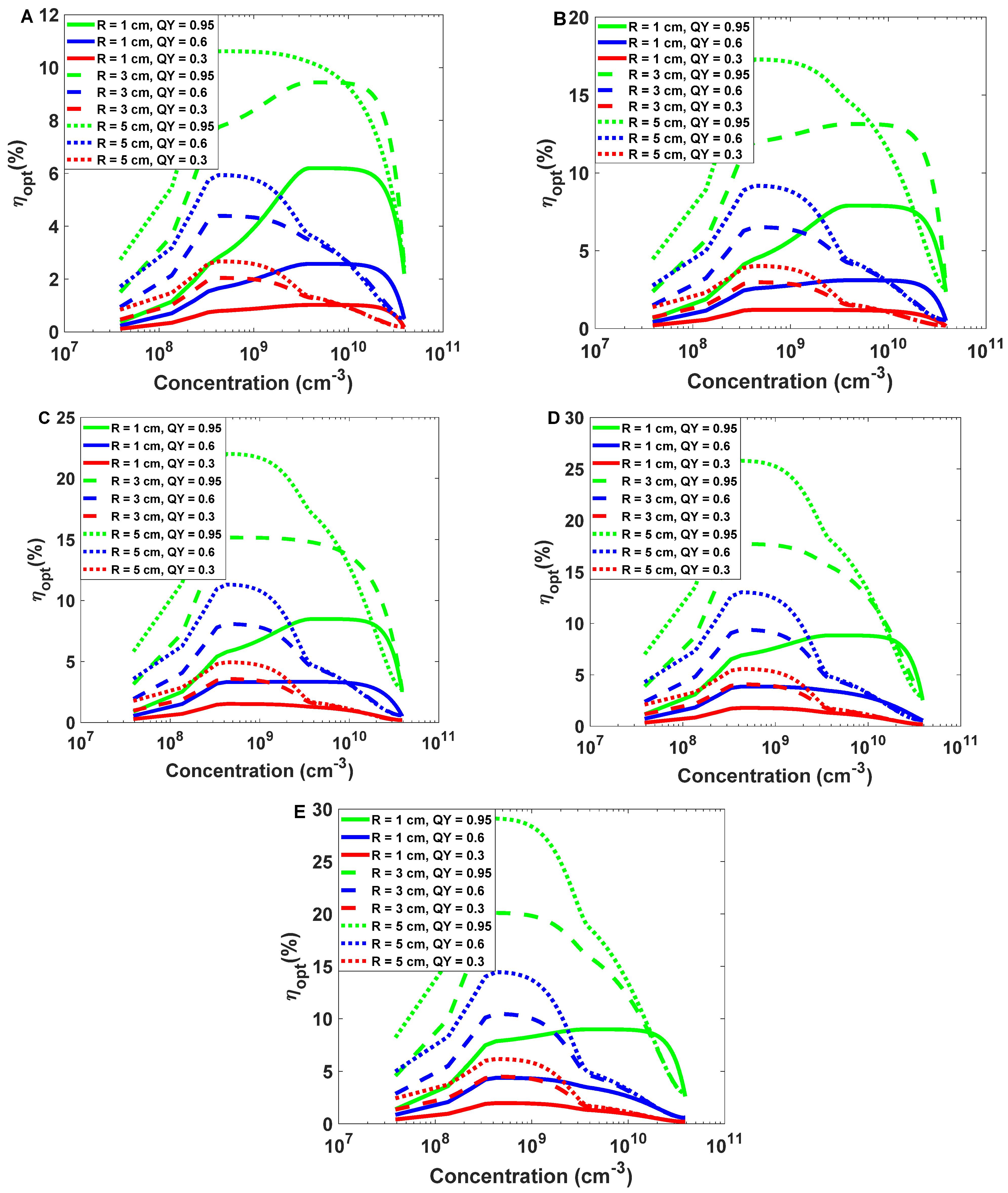 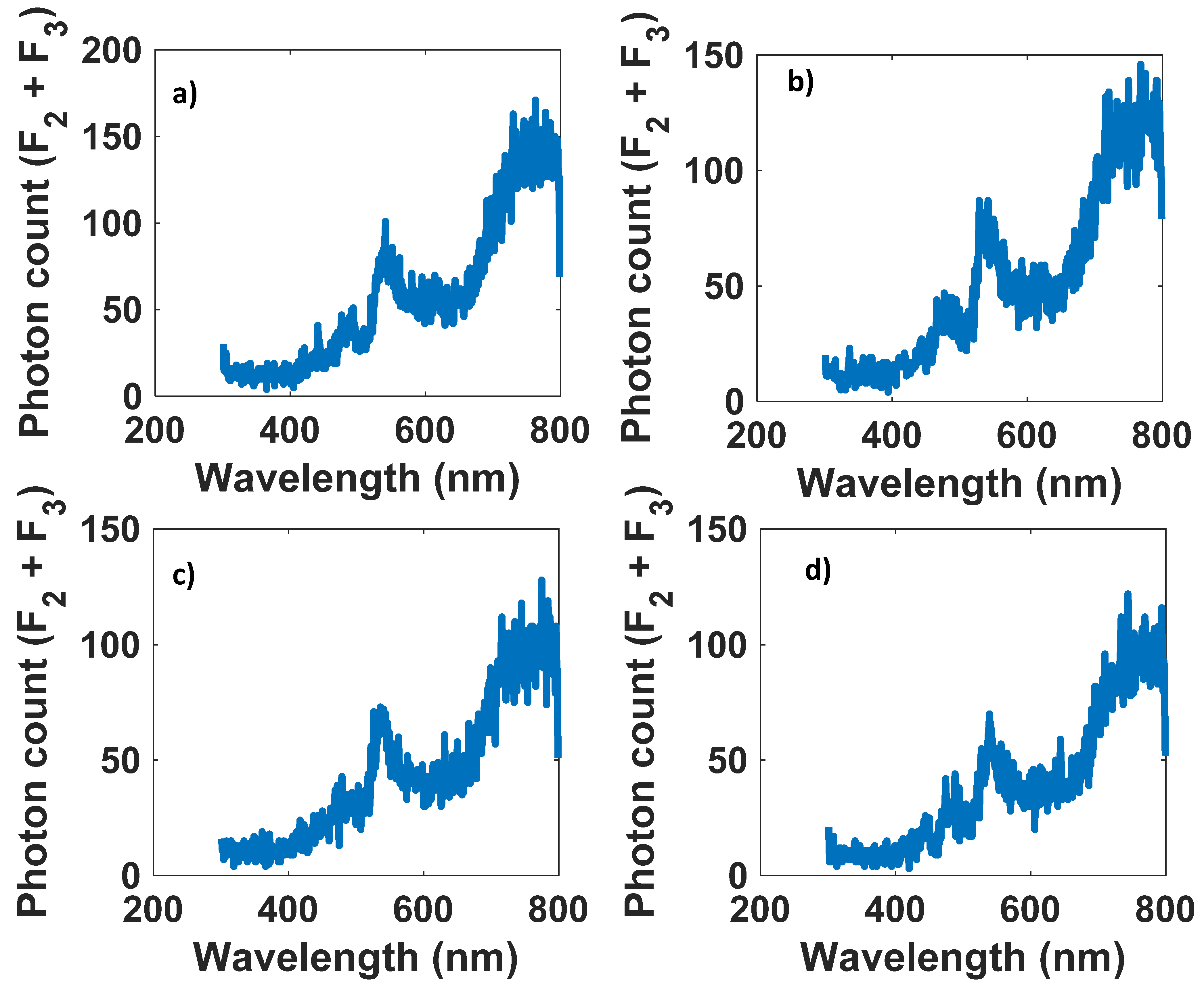 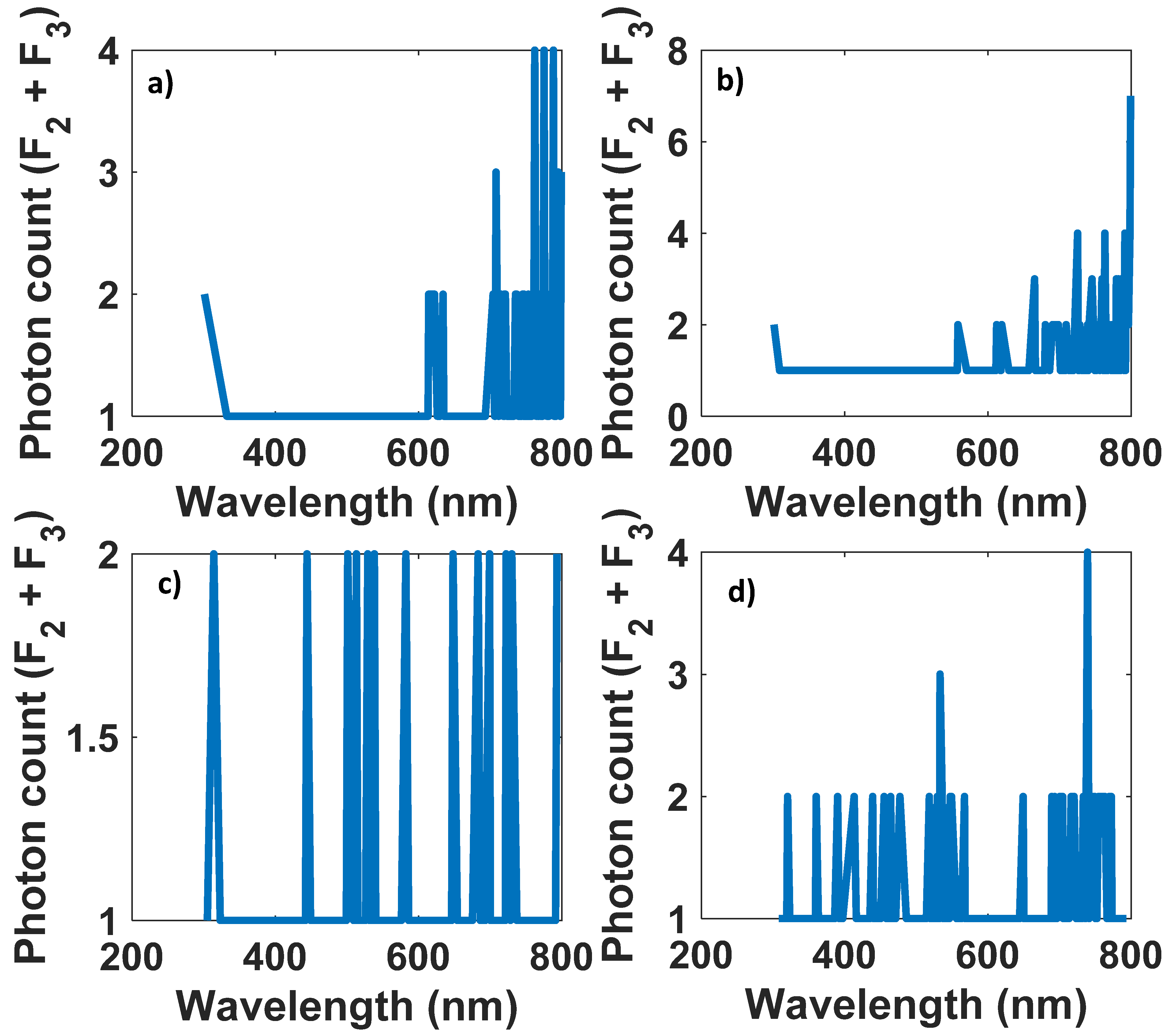