:
The development of all-dielectric structures with high magnetic response at optical frequencies has become a matter of intense study in past years. However, magnetic effects are weak at optical frequencies due to the small value of the magnetic permeability of natural materials. To this end, natural dielectric materials are unemployable for practical “magnetic” applications in optics. We have shown for the first time that it is possible to induce intense magnetic concentric subwavelength “hot circles” in a dielectric mesoscale Janus particle. The basis of the Janus particle is a combination of the effects of a photonic jet, whispering-gallery waves, and the concept of solid immersion. Simulations show an (H/H0)2/(E/E0)2 contrast of more than 10, and maximal magnetic field intensity enhancement is more than 1000 for a wavelength-scaled particle with a refractive index n < 2 and a size parameter in the order of 30. This work may provide a new way to realize precise magnetic devices for integrated photonic circuits and light–matter interaction.
Keywords:
Janus particle; hot-spot generation; magnetic field; magnetic hot circles; mesotronics

The strong localization of optical waves to volumes below the diffraction limit is a topic of extensive research involving a wide range of applications [1,2,3,4,5]. The ability to localize an optical wave to sub-wavelength volumes is called hot-spot engineering [6]. Through manipulation, the intensities of both the electric and magnetic fields can be enhanced to up to several orders of magnitude. A single dielectric spherical nanoparticle with high permittivity can exhibit a strong electromagnetic resonance [7], of which the first fundamental mode corresponds to magnetic dipole excitation, but the fabrication tolerances must be tailored down to the sub-nanometer resolution. The generation of strong magnetic hot spots by dielectric nanoparticles was first observed in inter-particle regions [8,9,10]. The interference of the magnetic and electric modes in such nanoparticle assemblies gives rise to sharp magnetic Fano resonances [11,12,13,14]. Dielectric wavelength-scaled (mesoscale) particles with a Mie-sized parameter q = kR, where k is the wavenumber and R represents particle radius, to the order of q ~ 10 have aroused big interest because of their potential to localize light at the sub-wavelength scale [15,16] and because of their ability to yield high internal magnetic and electric local field enhancements instead of plasmonic metal nanoparticles [17,18,19]. Moreso, the employment of mesoscale dielectric particles has facilitated the achievement of the remarkable magnetic enhancement of overcoming the inherent losses of plasmonic materials. Optical magnetic field localization squeezes into deep sub-wavelength regions, which opens promising perspectives for spintronics [20].
Recently, it has been shown that the Mie-type resonances of different orders overlap by increasing the refractive index to be greater than 1.4 [21]. In effect, this leads to a higher concentration of the electric and magnetic fields being focused within low-loss dielectric spherical particles with diameters less than the incident wavelength. For spherical gallium phosphide particles with a refractive index of n = 3.4932 at the specified wavelength of 532 nm and a Mie-sized parameter of q = 5.38, maximal field intensities of E2 ~ 40 and H2 ~ 140 were observed. In another study, a high-resonance effect was reported when using a particle with n = 1.46 and q ~ 37 [22]. It was observed that one of the resonant scattering coefficients was 20 times higher in magnitude than the other coefficients. This abnormal value was described as the constructive interference of one partial wave inside the microsphere. Later, the optical “super-resonance effect” in mesoscale dielectric spheres based on the high-order Fano resonance and caused by the particle’s internal partial waves was proposed [23,24,25]. In theory, this effect allows the attainment of super-high intensity magnetic fields. It is valid for a range of Mie-sized parameters q ~ 10–70 and a refractive index of n < 2, which theoretically render a field-enhancement effect that is more than 107 times stronger than that of downward radiation [26]. Moreover, it demonstrated the possibility of overcoming the diffraction limit despite having high sensitivity to losses in the particle material. Additionally, an unusual effect—the hot spot size decreasing down to less than the immersed diffraction limit of the particle material, with a tiny change being observed after the introduction of small dissipation into the particle material—was observed for the first time [24].
While the shapes of the mesoscale dielectric spherical particles have only 2 degrees of freedom (Mie-sized parameter q and refractive index n of the particle material), optically asymmetric particles or particles with broken spherical or cylindrical symmetries, called Janus particles [27], provide additional degrees of flexibility in electromagnetic response tuning [28,29]. While shaping the high-order Fano resonance has created opportunities for localized magnetic and electric field manipulation, we have proposed a more fundamental approach [29]. By tailoring the broken symmetry of the spherical- or cylindrical-shaped particles, we can facilitate new kinds of localization and enhancement of the electromagnetic fields’ hot spots inside Janus particles near their shadow surface. The introduction of broken symmetry into dielectric spherical or cylindrical particles as an additional degree of freedom enlarges the capacity for strong field localization beyond the diffraction limit at the nanoscale, opening a room of opportunities for new applications. In this manner, we find that spherical or cylindrical dielectric mesoscale particles with broken symmetry can generate stable nanoscale hot-spots with giant field intensity enhancement.

Magnetic concentric hot-circle generation at optical frequencies in all-dielectric mesoscale Janus particles is investigated using the wave optics module of COMSOL Multiphysics, a commercial finite element software. As seen in the schematic of the model shown in Figure 1, the Janus particle is formed by a cut cylinder with a truncation height h, where the radius of the cylinder is defined as R. The Janus particle is illuminated under a TE-polarization plane wave with the incident wavelength λ = 500 nm. The refractive index of the upper part of the Janus particle is set to np = 1.5, while that of the bottom part is chosen as nc. The particle is surrounded by medium with a refractive index of n0 = 1. In the simulation, an incident TE-polarized plane wave with E0 = 1 is added into the wave optics module as a background electric field, and perfectly matched layer-absorbing boundary conditions are utilized around the computational domain. To guarantee the accuracy of the simulation, the maximum element size of the free triangular mesh is set to 5 nm in the bottom part of the Janus particle and to 20 nm in the other computational domains. The electric intensity enhancement is defined as (E/E0)2, and the magnetic intensity enhancement is defined as (H/H0)2, where H0 = √ε0/μ0 × E0.

The generation of deep subwavelength magnetic hot spots in mesotronics [38] based on a new physical principle, aside from their key role in fundamental physics, provides a new degree of freedom for all-dielectric mesoscale structures, which can control unconventional photonic processes. Consequently, artificial optical magnetism is an active topic of research, and great attention has been devoted to all dielectric wavelength-scaled structures that generate magnetic hot spots. We have shown that it is possible to induce intense magnetic concentric subwavelength hot circles in a dielectric mesoscale Janus particle. The basis of the Janus particle is a combination of the effects of a photonic jet, whispering-gallery waves, and the concept of solid immersion. Applying morphological symmetry breaking on the cylindrical particle, we could switch from electric-field hot spots to magnetic hot spots with field enhancement of up to multiple orders of magnitude. As expected, magnetic and electrical hot spots are sensitive to losses in the dielectric material. Simulations show an (H/H0)2/(E/E0)2 contrast of more than 10 for a wavelength-scaled particle with refractive index n < 2 with an optimized depth of the high-index layer that escalates as the Mie-sized parameter increases. For such Janus particles, conventional nonlinear optics related to nonlinearity ε = ε(E) is dominant. The proposed generation method for magnetic hot spots is prospectively useful for magneto–optical devices in photonic applications, for enhancing magnetic light–matter interaction from quantum computing [39] to sensing [40], maser [41], nanoparticle trapping [42], and in superlensing, spintronics, nonlinear spectroscopy, magnetic recording [43,44], etc.

This work was supported by Tomsk Polytechnic University Development Program. 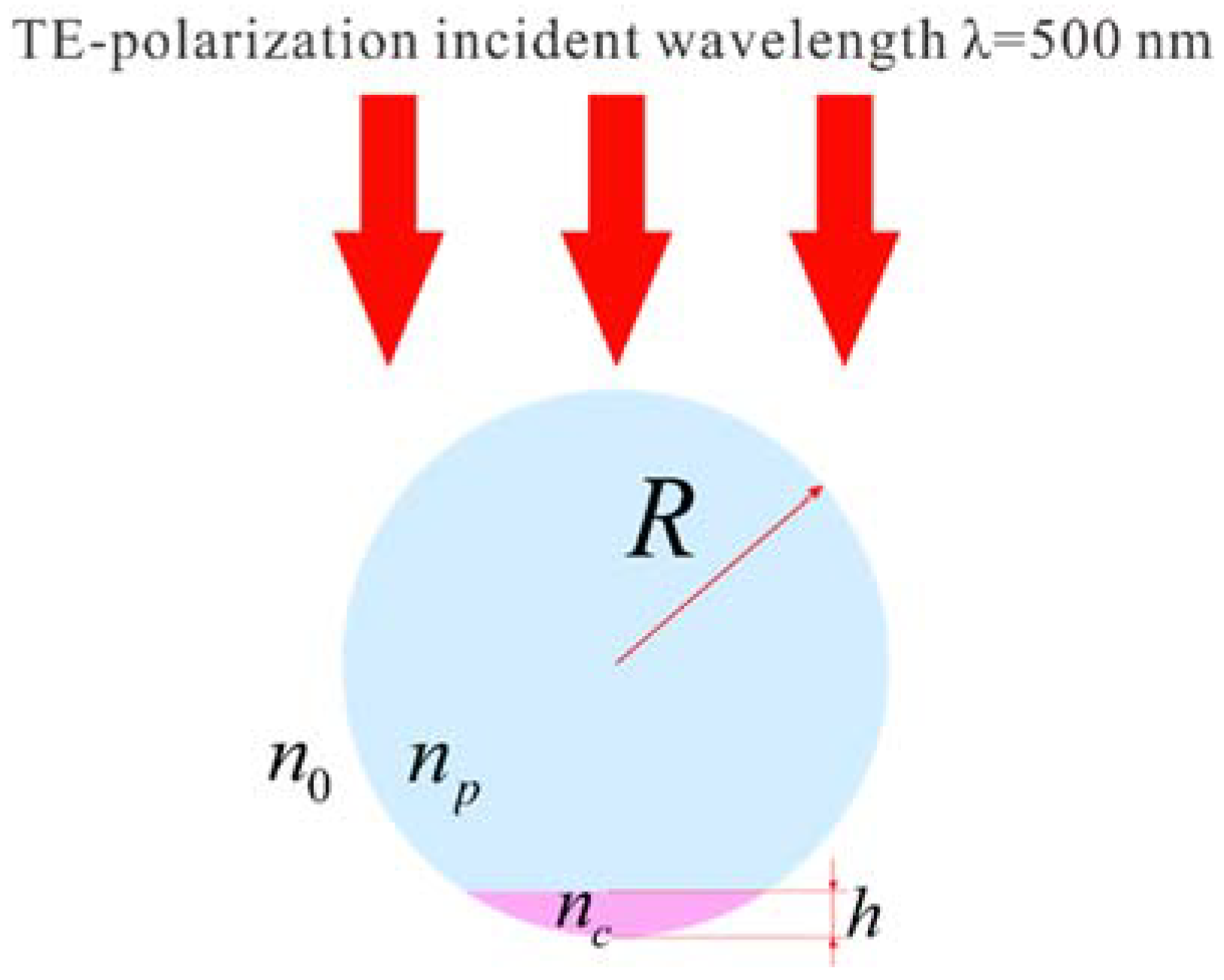 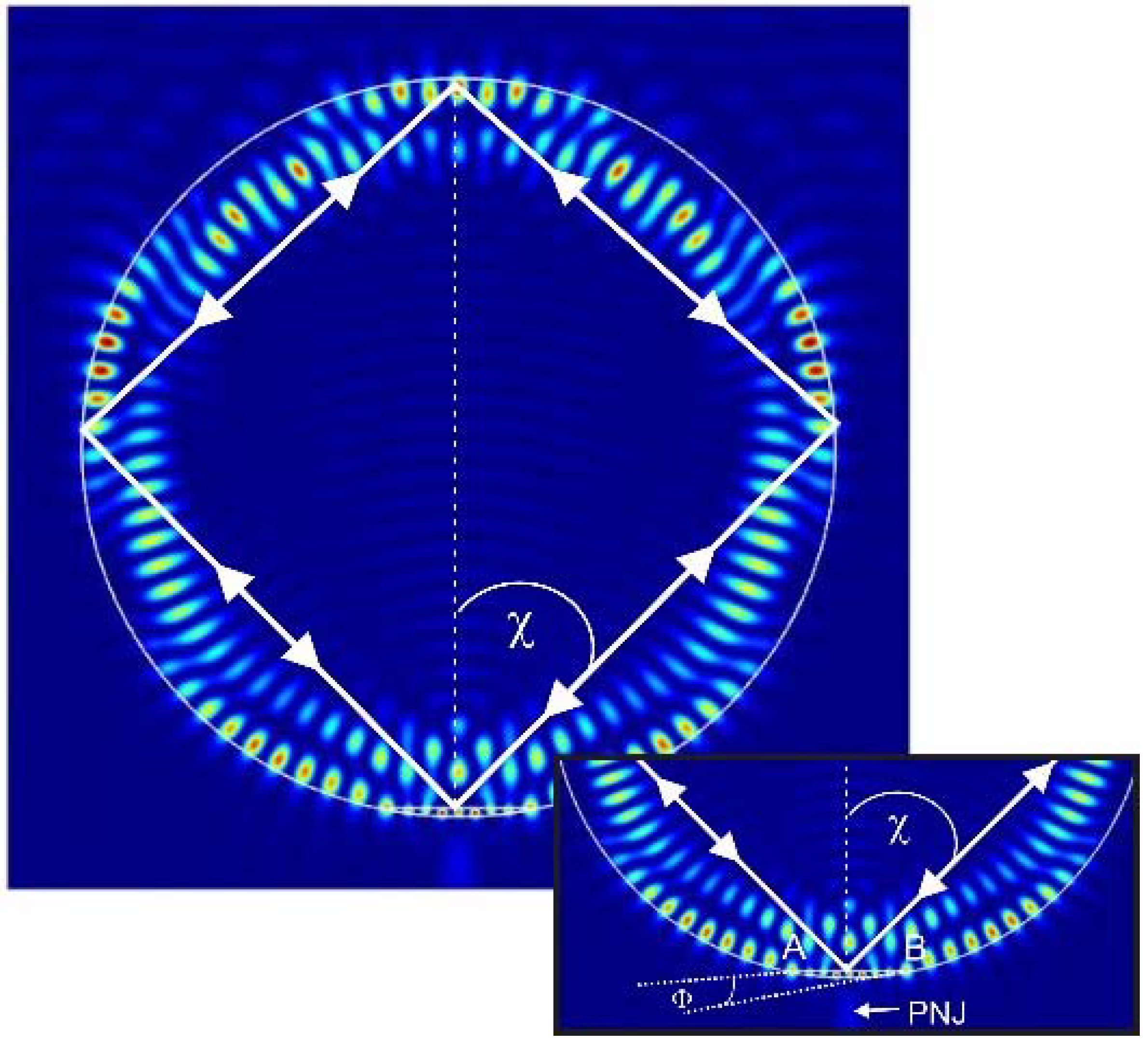 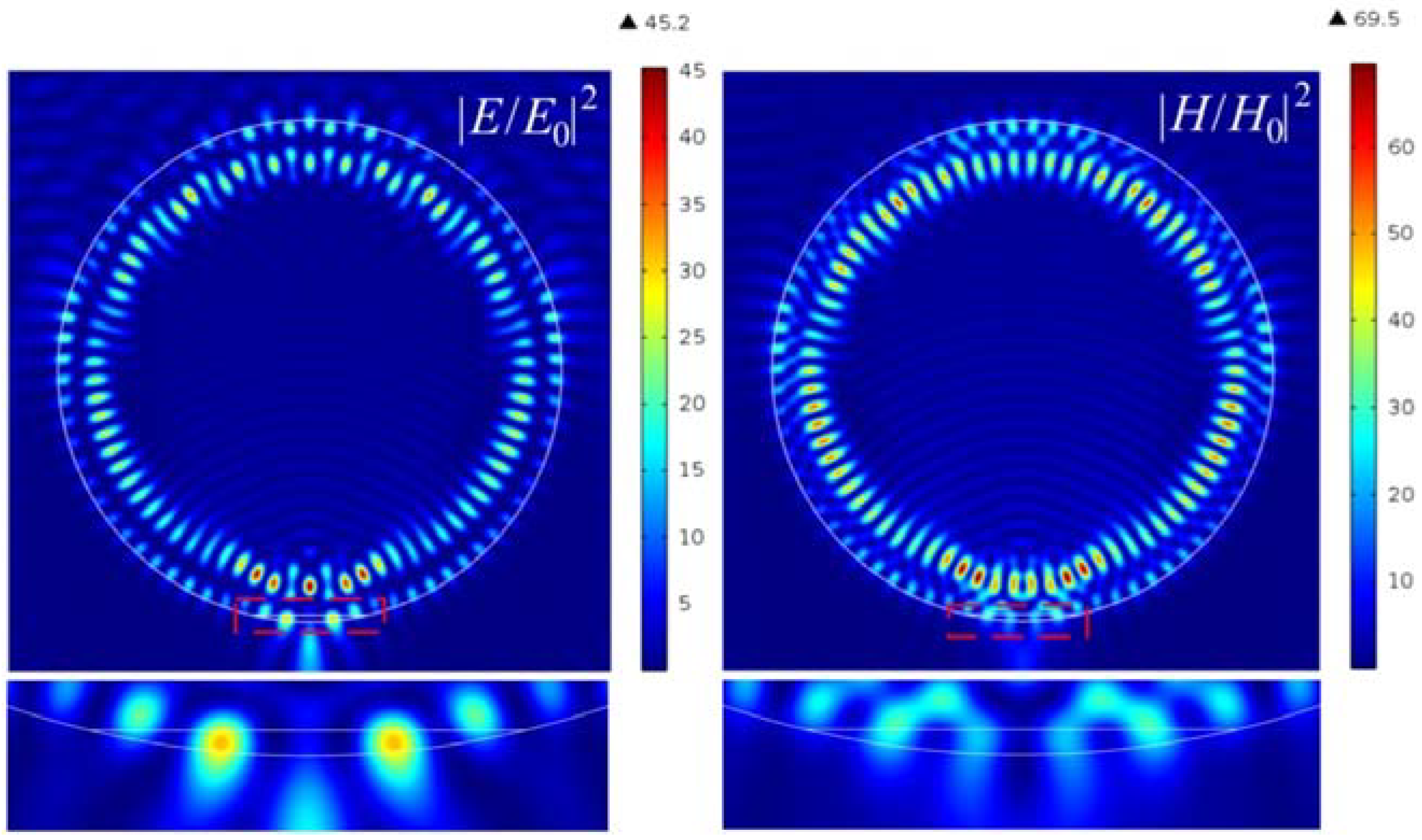 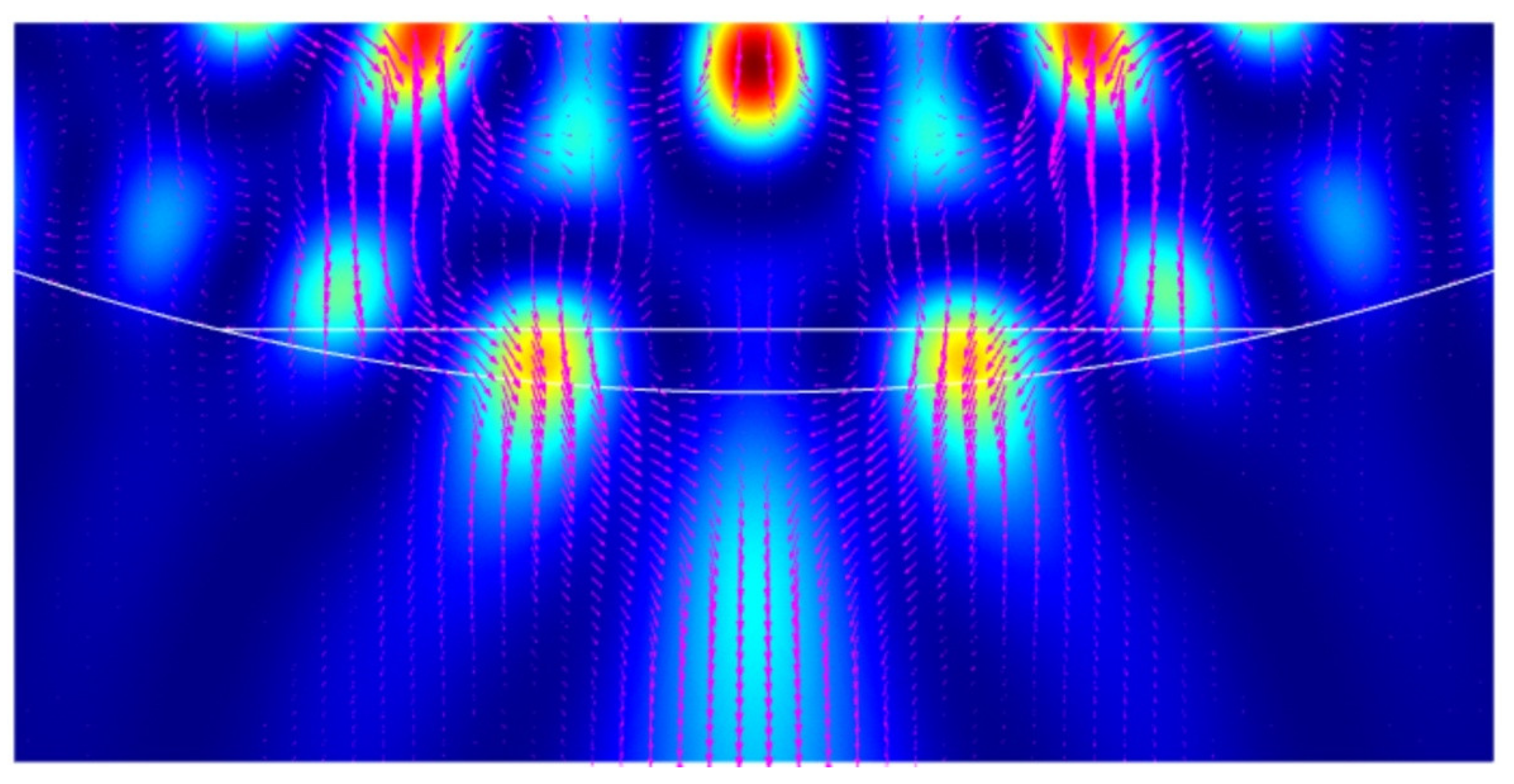 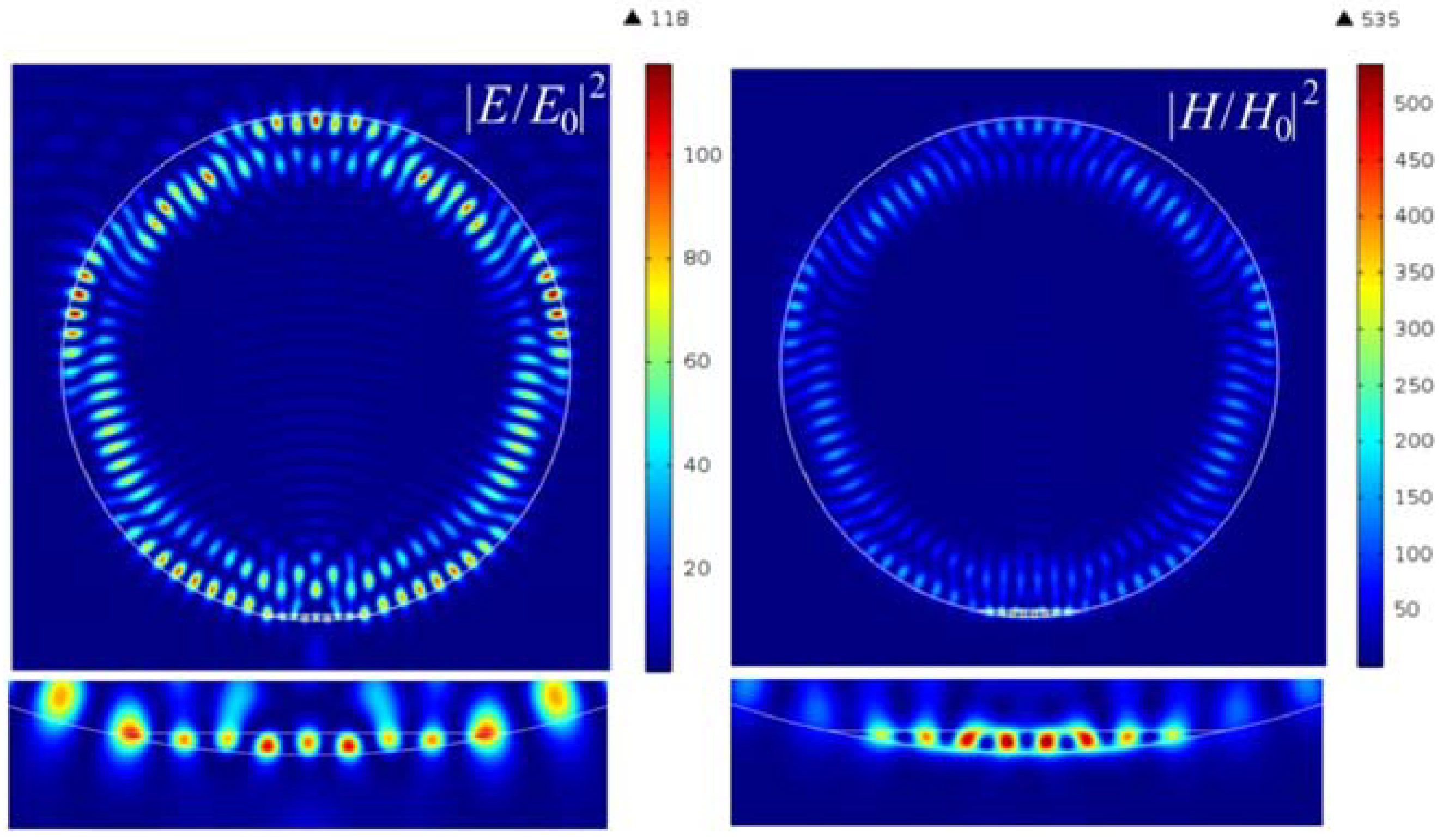 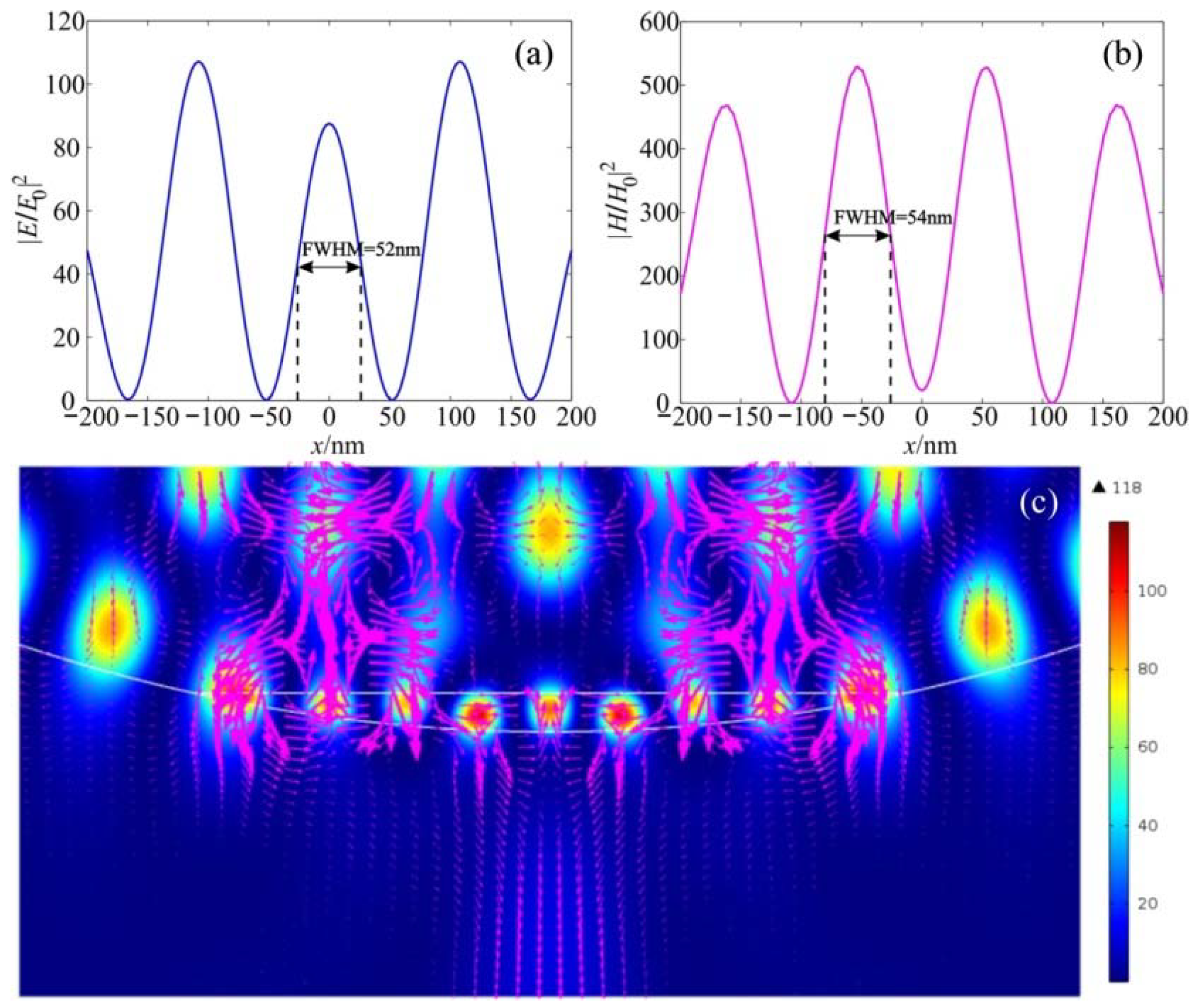 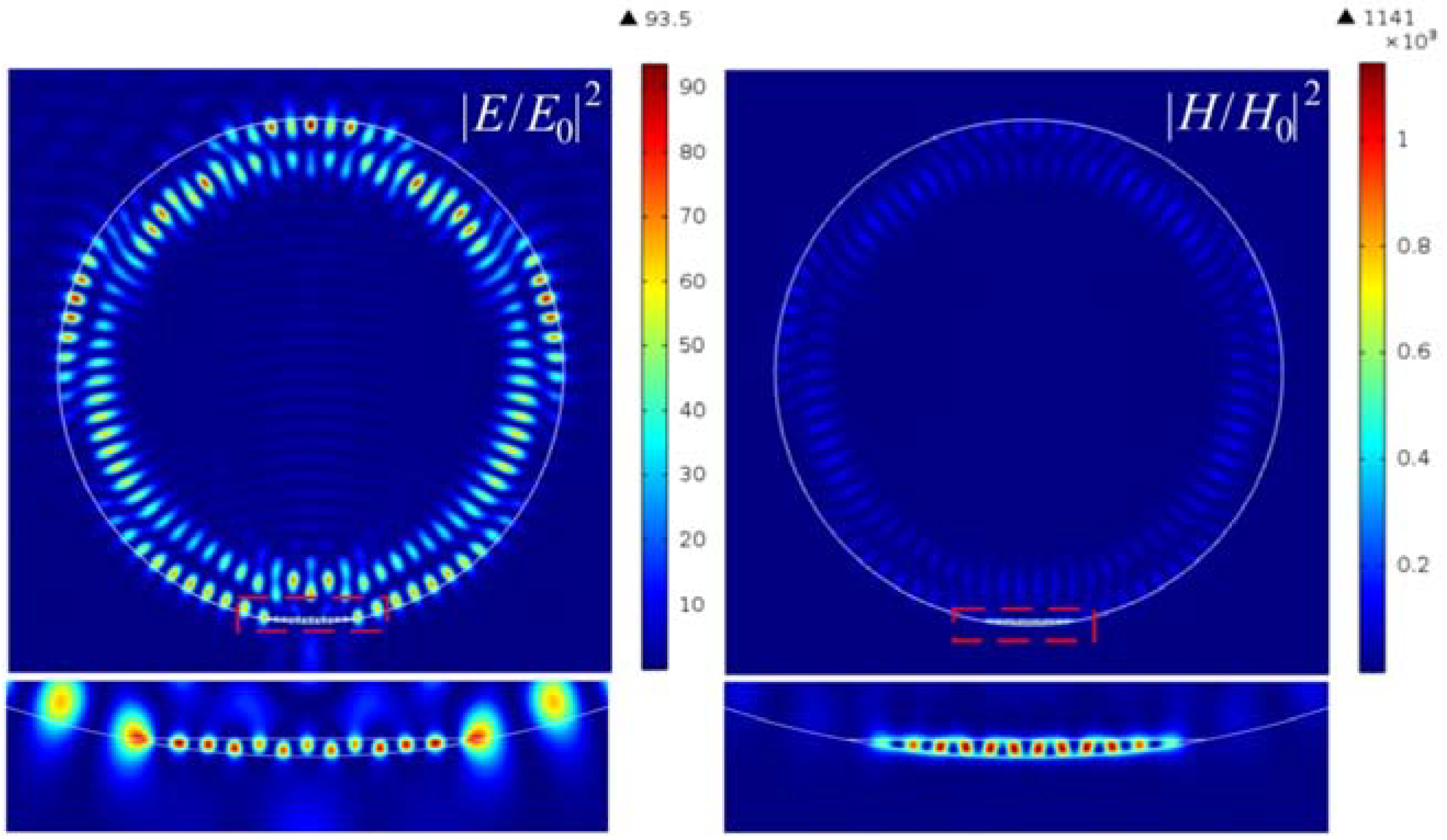 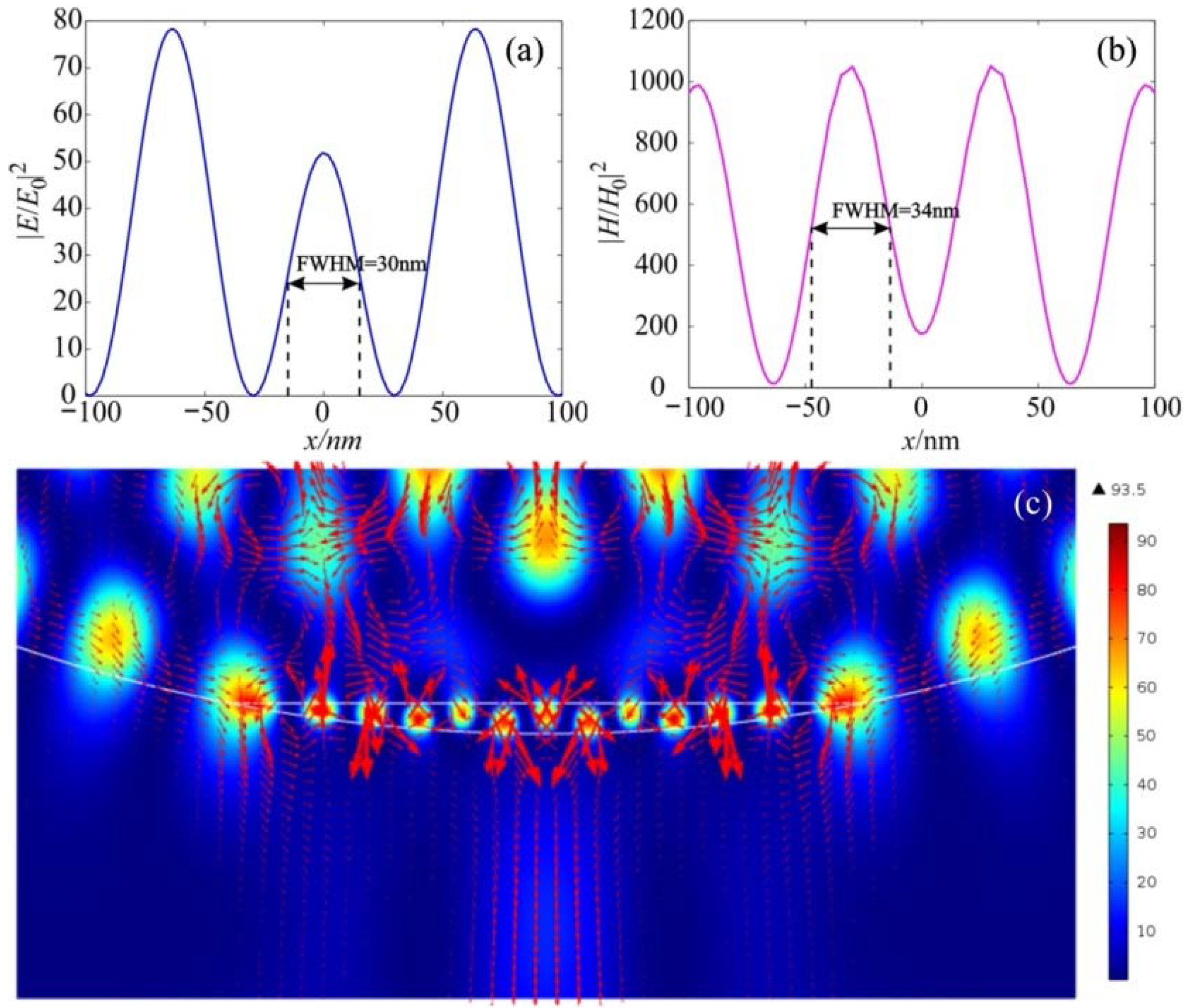 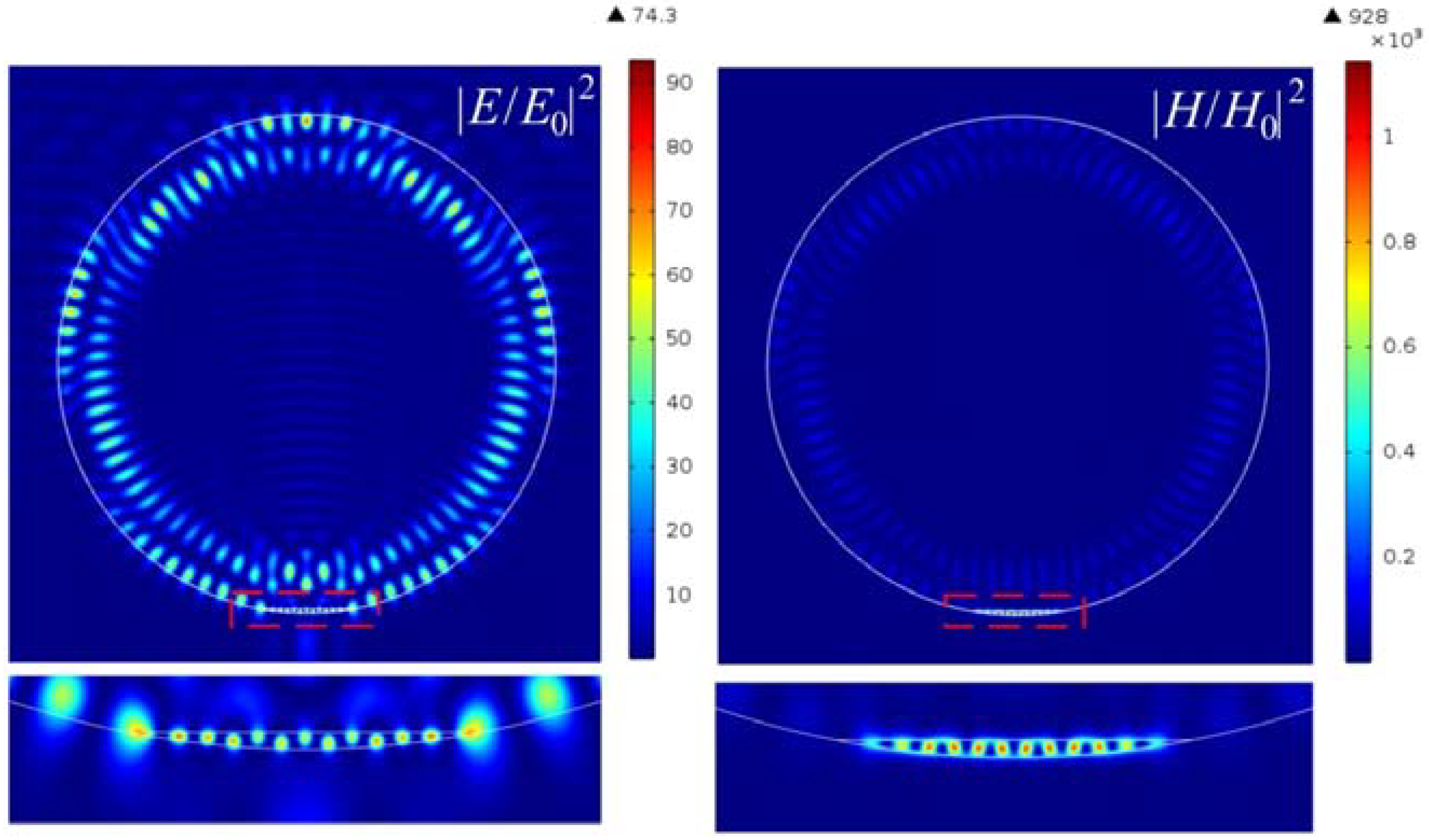