Coupling between Polymer Conformations and Dynamics Near Amorphous Silica Surfaces: A Direct Insight from Atomistic Simulations

:
The dynamics of polymer chains in the polymer/solid interphase region have been a point of debate in recent years. Its understanding is the first step towards the description and the prediction of the properties of a wide family of commercially used polymeric-based nanostructured materials. Here, we present a detailed investigation of the conformational and dynamical features of unentangled and mildly entangled cis-1,4-polybutadiene melts in the vicinity of amorphous silica surface via atomistic simulations. Accounting for the roughness of the surface, we analyze the properties of the polymer chains as a function of their distance from the silica slab, their conformations and the chain molecular weight. Unlike the case of perfectly flat and homogeneous surfaces, the monomeric translational motion parallel to the surface was affected by the presence of the silica slab up to distances comparable with the extension of the density fluctuations. In addition, the intramolecular dynamical heterogeneities in adsorbed chains were revealed by linking the conformations and the structure of the adsorbed chains with their dynamical properties. Strong dynamical heterogeneities within the adsorbed layer are found, with the chains possessing longer sequences of adsorbed segments (“trains”) exhibiting slower dynamics than the adsorbed chains with short ones. Our results suggest that, apart from the density-dynamics correlation, the configurational entropy plays an important role in the dynamical response of the polymers confined between the silica slabs.
Keywords:
atomistic simulations; interphase; polymer dynamics; films; rough silica interfaces

Each model system consists of a periodic silica slab and a polymer matrix, namely cis-1,4-polybutadiene (cPB), embedded between the slab and its periodic images at 413 K. The polymer chains are either composed of 30 monomeric units (cPB30) or 100 monomeric units (cPB100). The entanglement molecular length of cPB is around 50 monomers, and thus the chosen model systems correspond to a Rouse-like one (cPB30) and a mildly entangled one (cPB100) [56]. The polymer chains are modelled by a united atom model, meaning that the hydrogens are not simulated explicitly but are included together with the carbon atoms in one united atom, e.g., CH. The details of the force field used for cPB can be found elsewhere [54]. Both 30 and 100-mers in bulk were also simulated as reference systems. The model of the amorphous silica is based on the force field of Lopes et al. [57], Ndoro et al. [58] and Pandey and Doxastakis [59]. The slab consists of silicon, oxygen and hydrogen atoms. Only the atoms of the silica slab are partially charged, and the electrostatic interactions are accounted by the reaction field approach. The bonds of hydrogens with oxygens were constrained with the LINCS algorithm [60], and the cut-off distance for the non-bonded interaction potential was set to 2 nm given the absence of long-range dispersion corrections. The details about systems under study are listed in Table 1. Note that the systems are weakly confined, i.e., the film thickness is much bigger than .
The systems were prepared and equilibrated via a multiple-step protocol.
During the production run, the Nose–Hoover thermostat and Parrinello–Rahman barostat were used to maintain the temperature at 413 K and the pressure at 1 bar. Silica slab and polymer matrix were coupled to separate thermostats to avoid temperature gradients. The time step was 1 fs. The periodic boundary conditions are applied in all three directions. The length of the production run was 350 ns for the cPB30 film and 450 ns for the cPB100. A snapshot of a well-equilibrated cPB30/Sil system is shown in Figure 1b.
In order to calculate the dynamical properties and properly sample the time scales of the local segmental dynamics, we set up five short runs of 5 ns with the frequency of saving 1 ps and one run of 25 ns with the frequency of saving 5 ps.

3.1. Structure of the Interphase

3.2. Dynamics at the Interface

We used atomistic molecular dynamics simulations to obtain insights into structure–dynamics relations in thick films of cis-polybutadiene (cPB) chains placed between rough amorphous silica slabs in the regime, where the dynamics are not strongly affected by the topological constraints (i.e., entanglements). Particular attention was paid to linking the conformational behavior of cPB chains of two different molecular weights (a unentangled Rouse-like and a mildly entangled one) with their segmental dynamics. Concerning the effect of the position of the polymer segment with respect to the substrate (i.e., spatial effects) on the average structural and dynamical properties, we showed that the lateral translational and orientational dynamics were slowed down near the silica slab and the extension of this effect was in line with the range of the density fluctuations related to the enhanced chain packing near the surface. The degree of the dynamical heterogeneity related to the segmental relaxation, which is quantified by the stretch exponent , exhibited a non-monotonous dependence on the distance between the polymer and silica slab, most likely due to the altering degree of heterogeneity of the monomer local environment in contrast to a monotonous dependence previously reported for some flat surfaces.
Concerning the dynamics of the particular conformational arrangements (i.e., trains, loops, tails and free segments), spatial effects were also present, and the segments associated with the given conformation relaxed slower when located closer to the silica surface. The segments belonging to loops displayed a slower dynamical response than the tail segments positioned in the same distance from the substrate. Strong internal (positional) dynamical heterogeneities for train segments were detected as a result of the interplay between the entropic and enthalpic interactions with the rough solid substrate. A symmetric dynamical gradient along the trains was observed for characteristic relaxation times, with the slowest components of the film being the internal segments of trains consisting of multiple (more than three) monomers. Consequently, quantitative similarities between the lateral diffusion of the single-monomer trains and of the tail or loop segments in the nearest vicinity of the adsorbed layer were found, indicating dynamical correlations in the film. We expect that the spatio-temporal link between the configurational and dynamical properties presented here will contribute to a better understanding of the experimentally observed interfacial phenomena. In addition, by focusing on the detection and analysis of the slow and fast components in polymer films, we aim to facilitate the description of the coexistence of fast and slow chain populations previously studied by simpler coarse-grained models on heterogeneous surfaces [32,33] and, thus, to go a step further in elucidating dynamic heterogeneities in nanoscopically confined polymers.

The following are available online at https://www.mdpi.com/article/10.3390/nano11082075/s1, Description of the fitting procedure, Figures S1, S3 and S4a: Examples of the fitting procedures, Figure S2: The parameters from the KWW function describing long time relaxation of PB100/Sil, Figure S4b: Relaxation times for the segments along the train for trains of different length for cPB100/Sil using different fitting procedure, Figure S5: Average distance from the substrate for the train segments as a function of the position in the train.

This work was supported by The Goodyear Tire & Rubber Company. P.B. and V.H. acknowledge support by project “SimEA”, funded by the European Union’s Horizon 2020 research and innovation programme under grant agreement No 810660.

The data that support the findings of this study are available within the article and in Supplementary Materials. 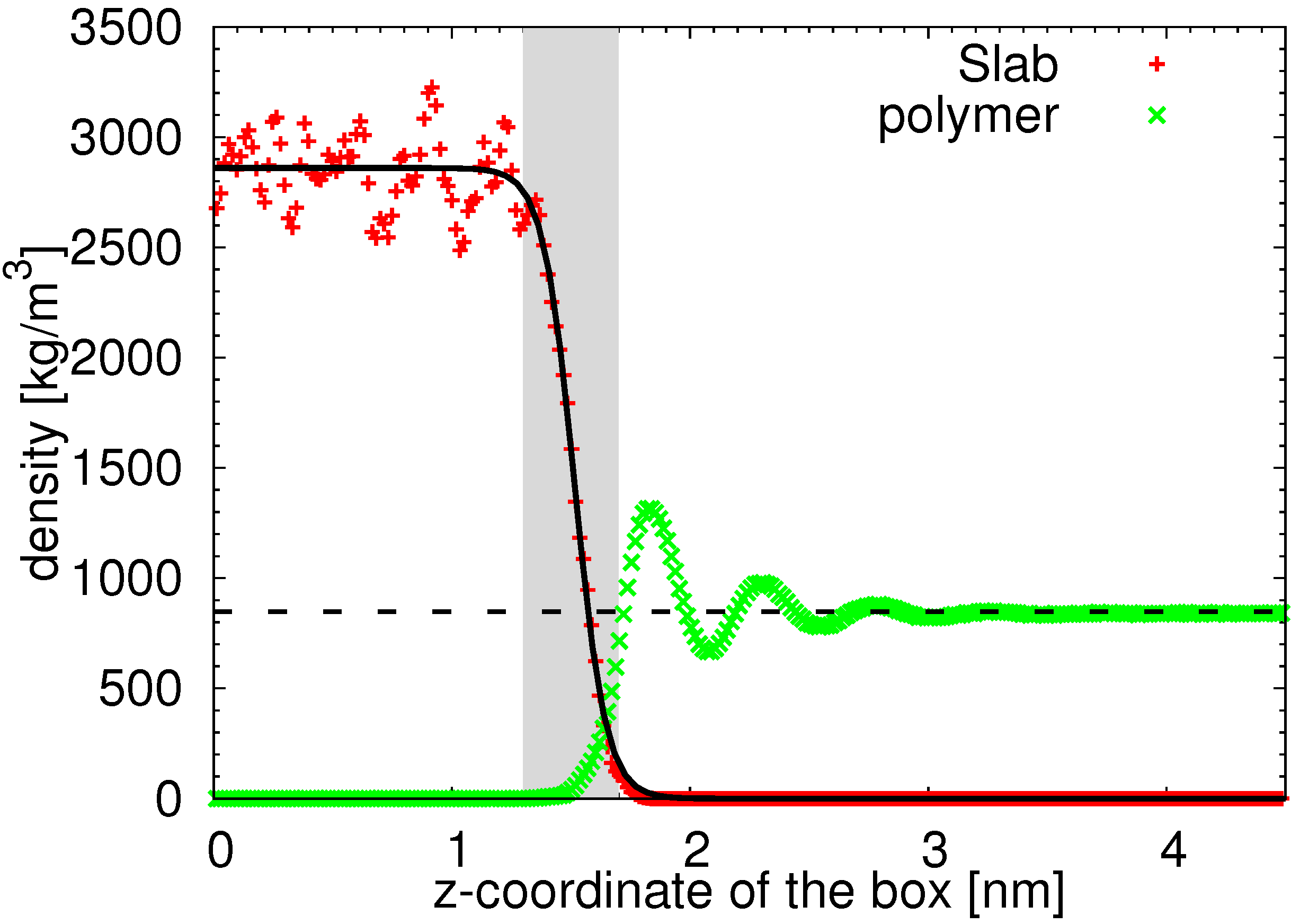 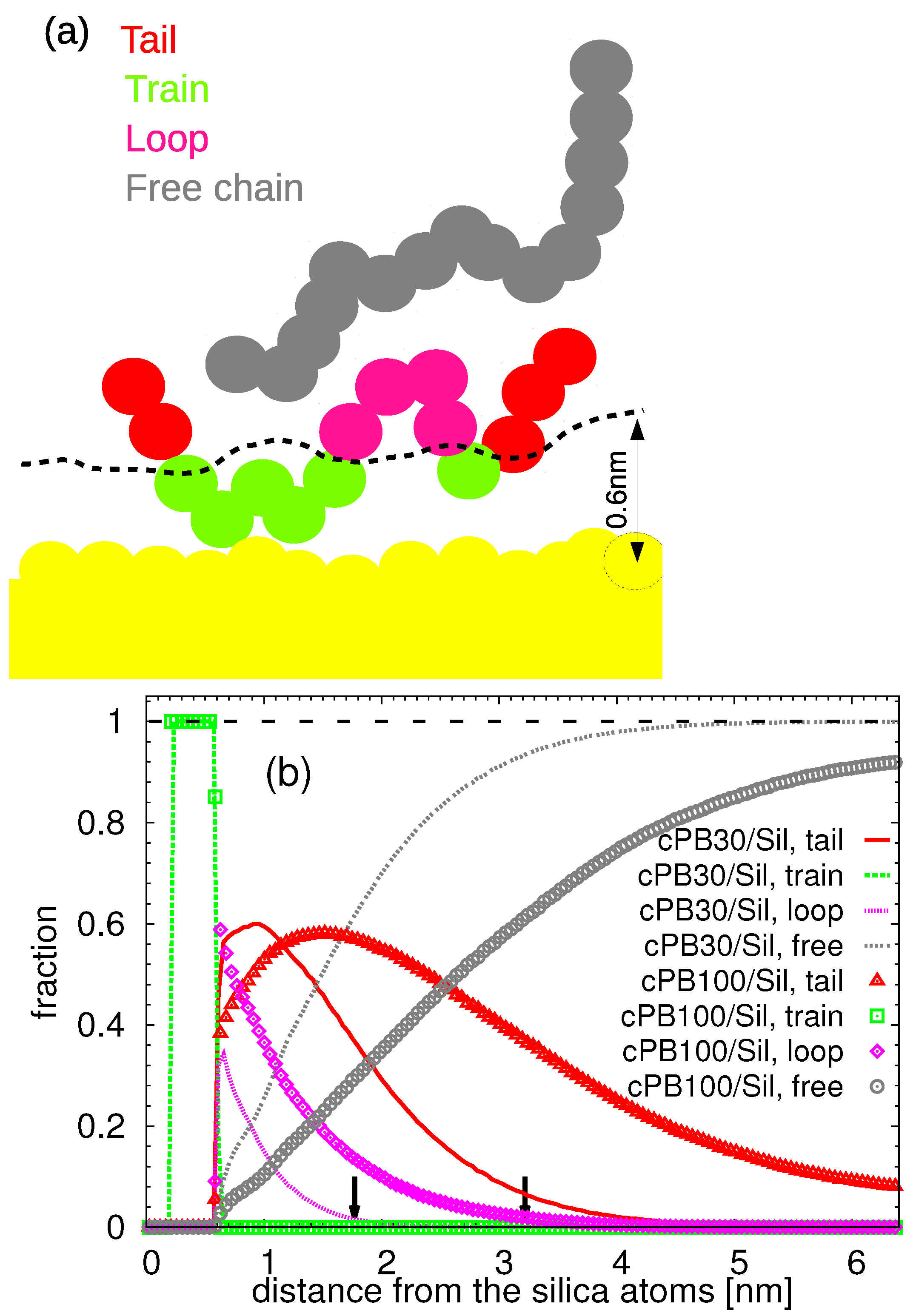 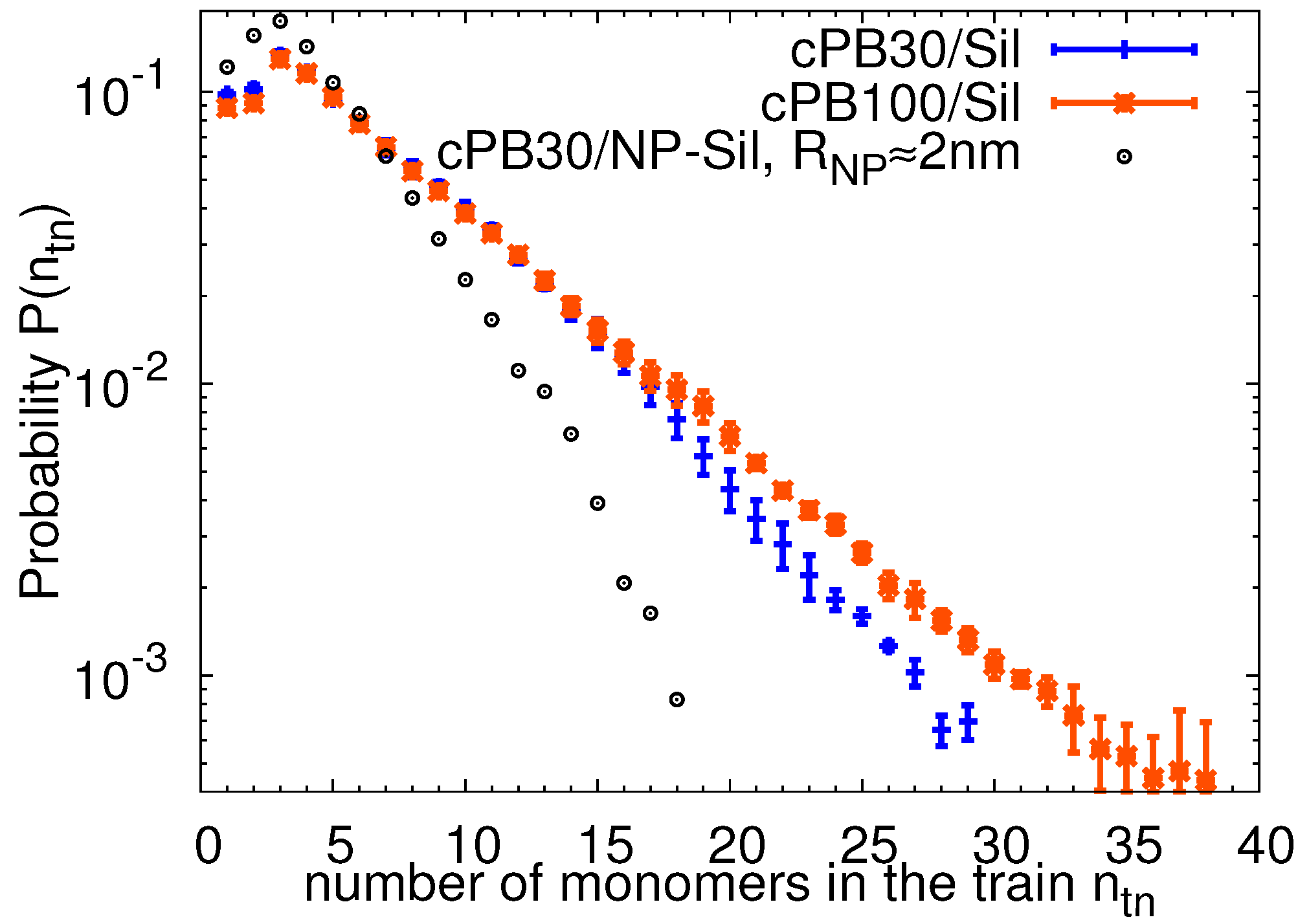 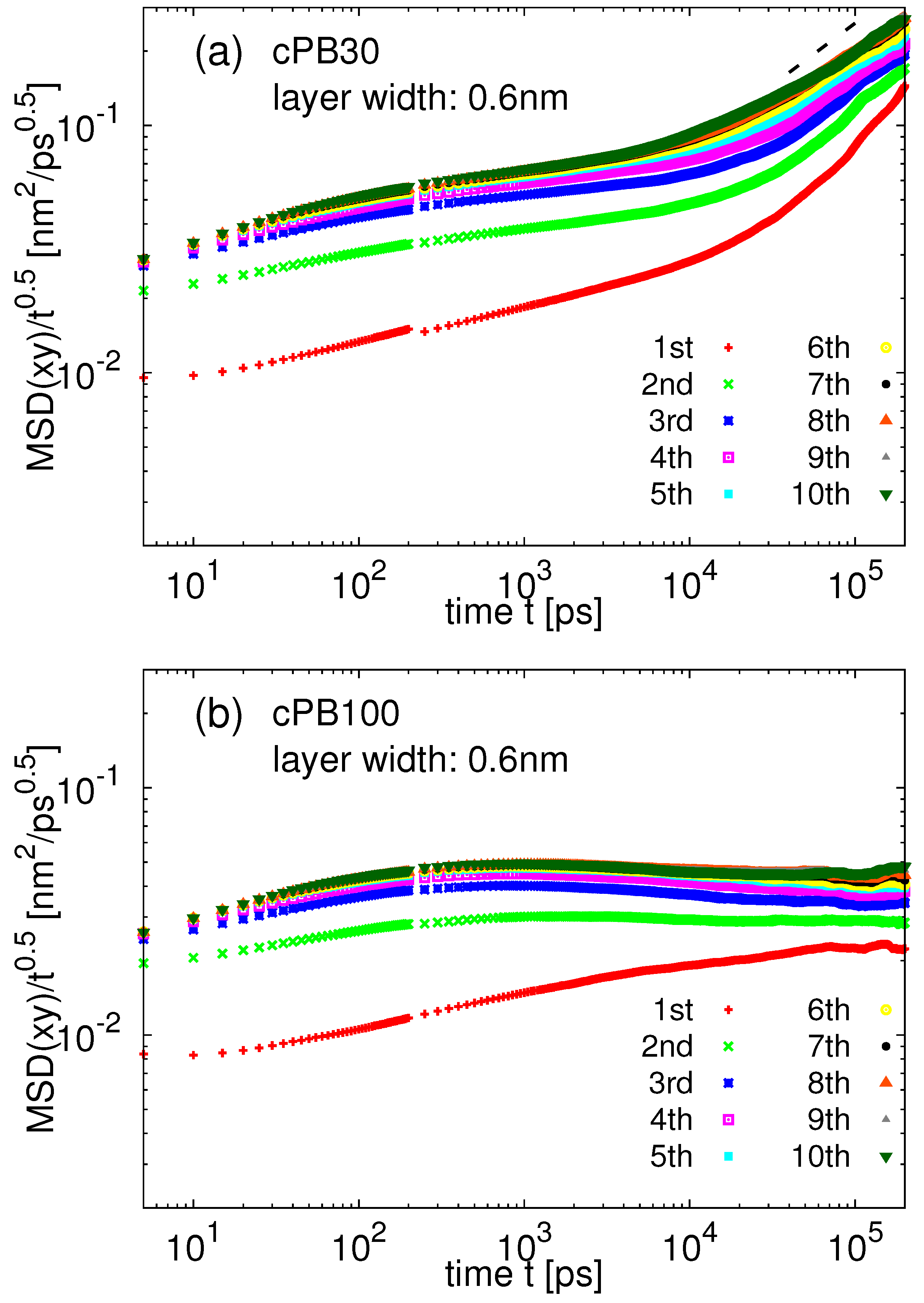 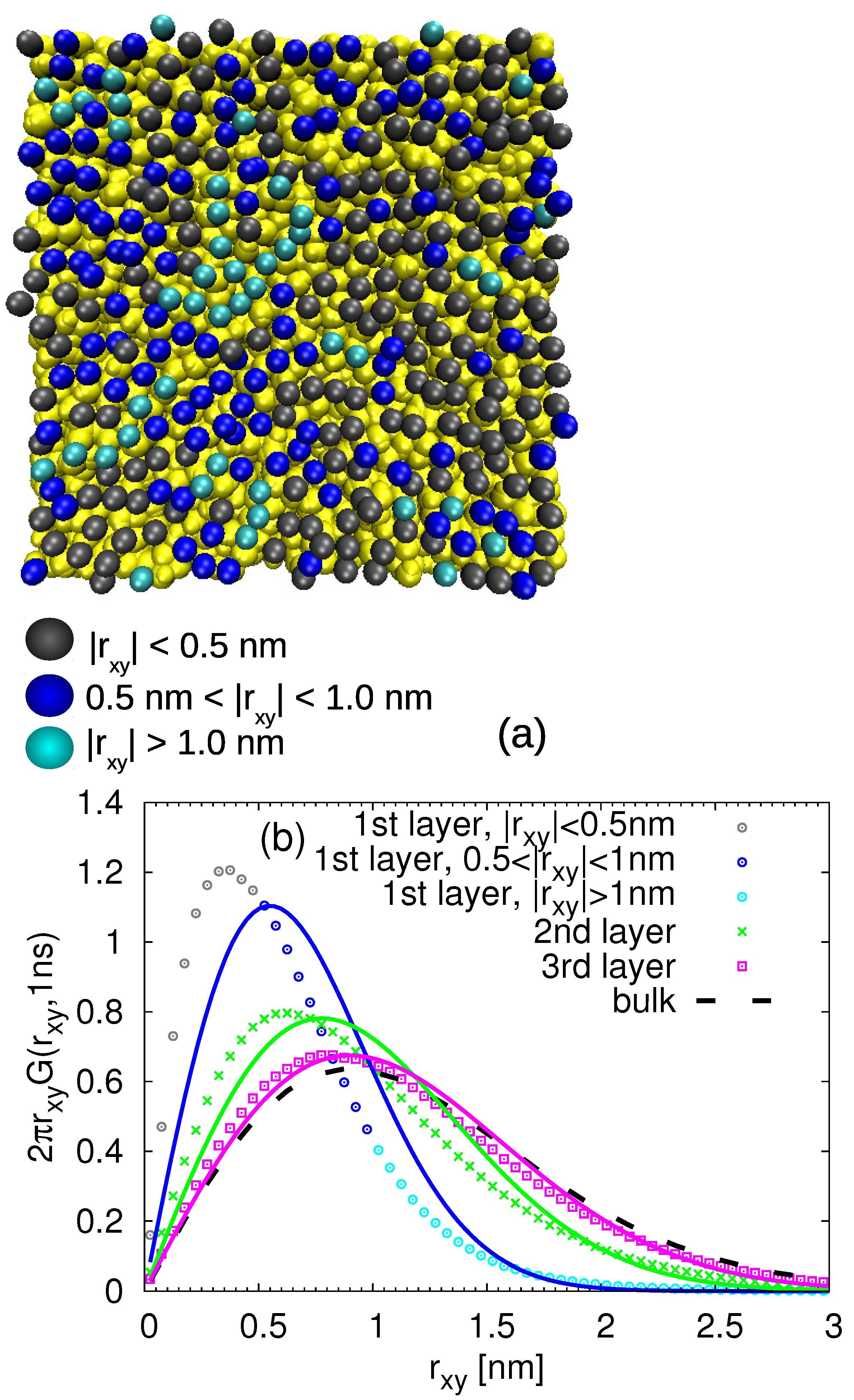 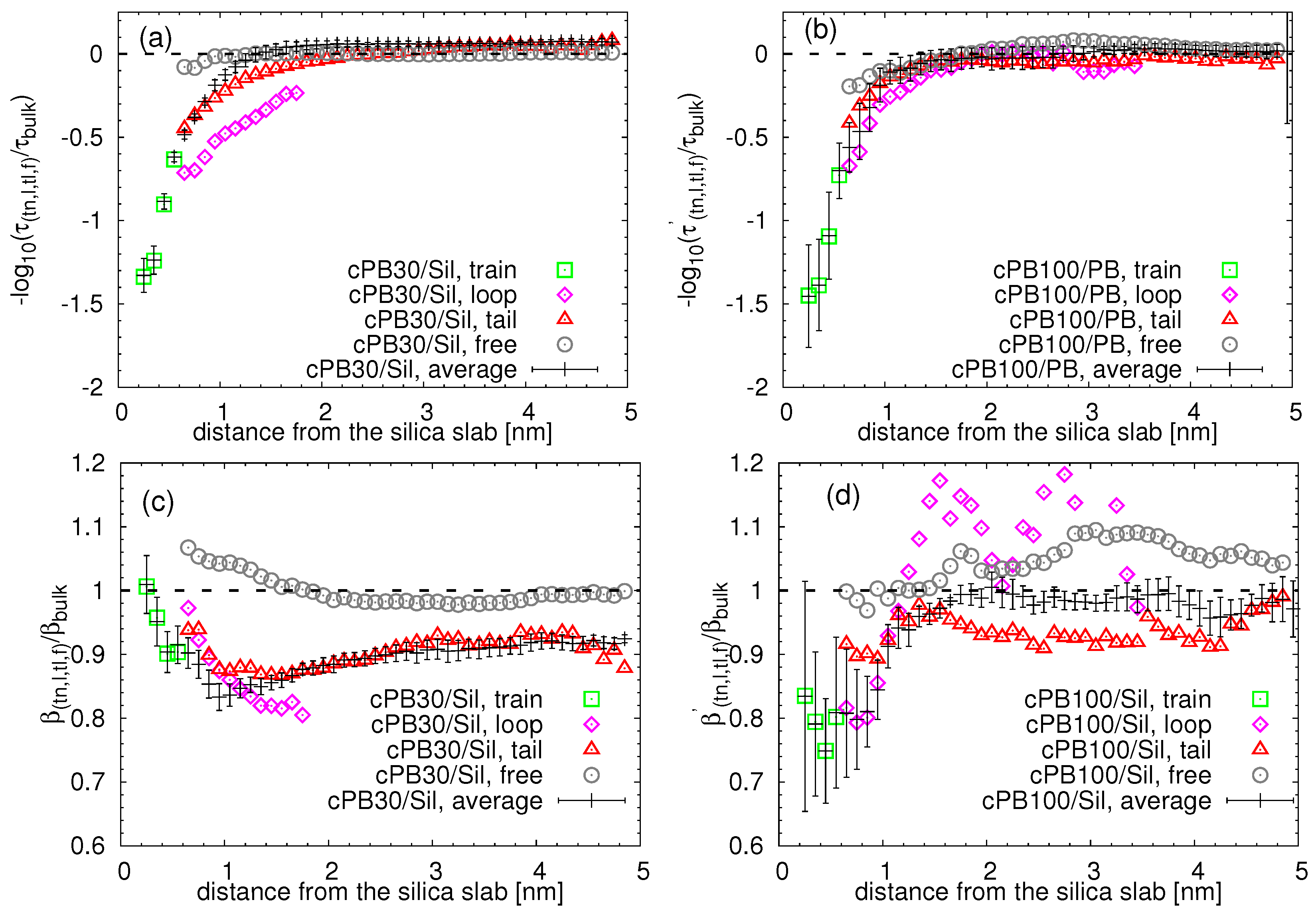 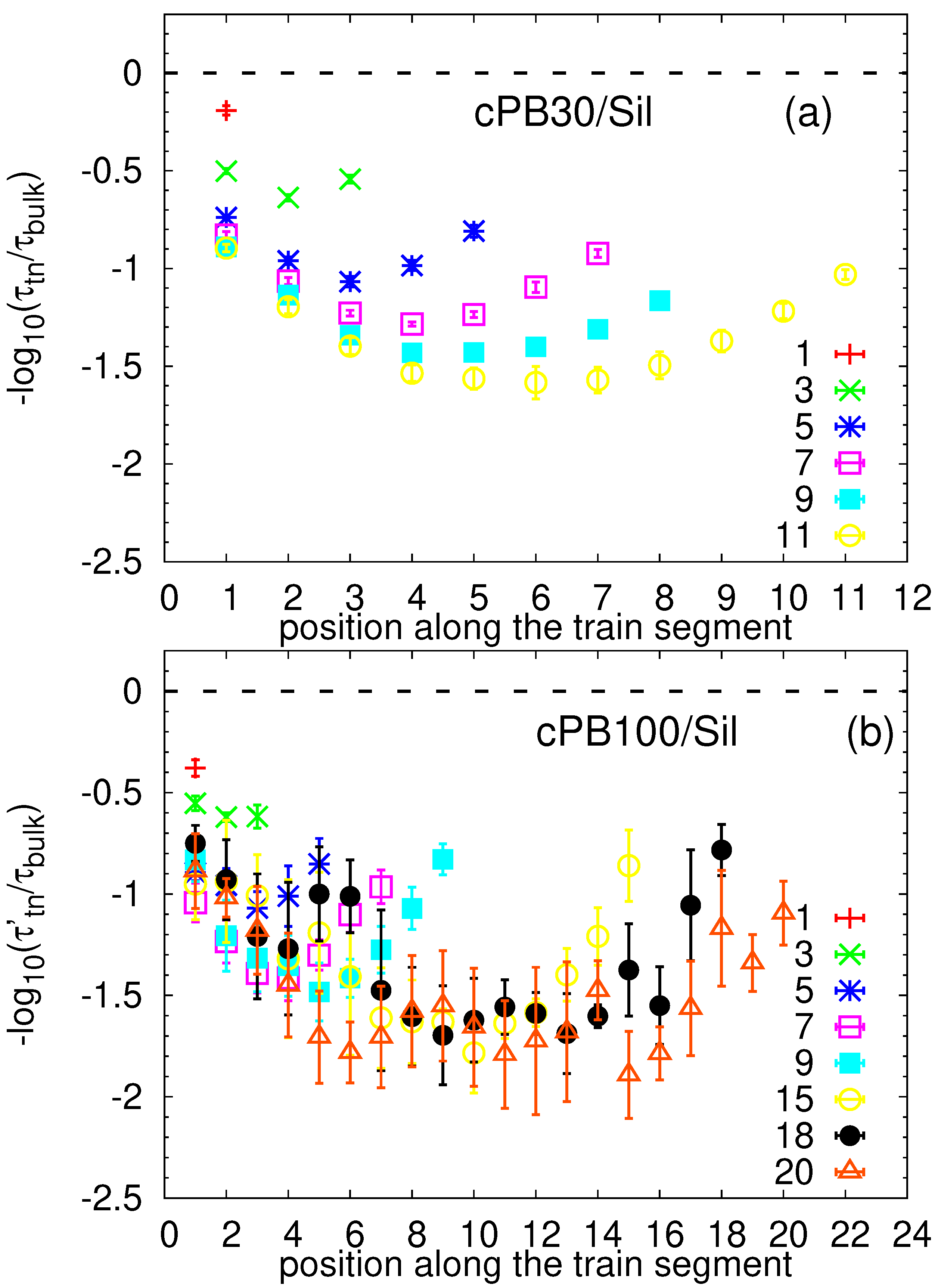 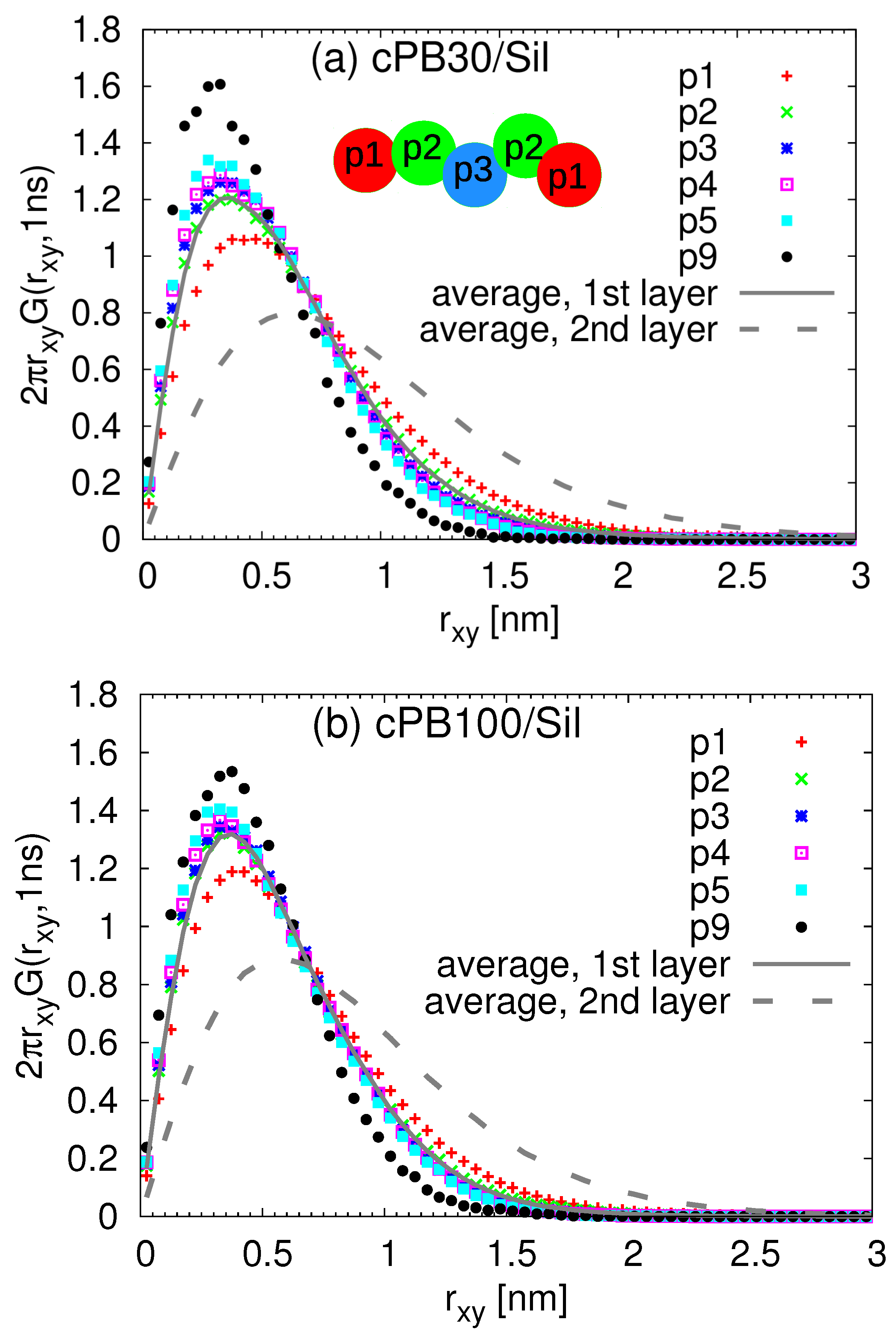 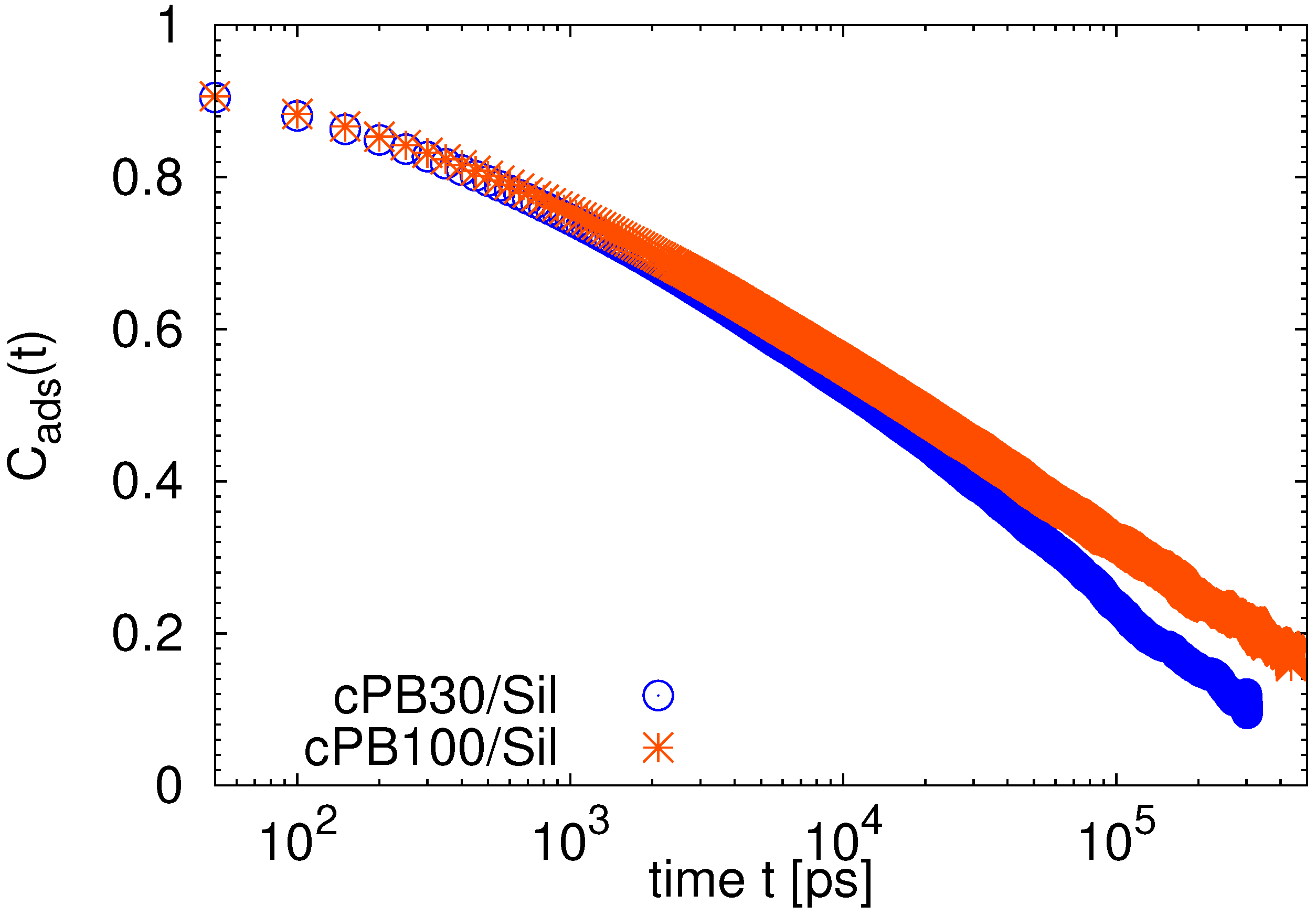