Evaluation of Physicochemical Properties of Amphiphilic 1,4-Dihydropyridines and Preparation of Magnetoliposomes
Previous Article in Journal

Owing to strong plasmonic absorption and excellent biocompatibility, gold nanostructures are among best candidates for photoacoustic bioimaging and photothermal therapy, but such applications require ultrapure Au-based nanoformulations of complex geometry (core-shells, nanorods) in order to shift the absorption band toward the region of relative tissue transparency (650–1000 nm). Here, we present a methodology for the fabrication of [email protected] core-satellite nanostructures, comprising of a Si core covered with small Au nanoparticles (NP), based on laser ablative synthesis of Si and Au NPs in water/ethanol solutions, followed by a chemical modification of the Si NPs by 3-aminopropyltrimethoxysilane (APTMS) and their subsequent decoration by the Au NPs. We show that the formed core-satellites have a red-shifted plasmonic absorption feature compared to that of pure Au NPs (520 nm), with the position of the peak depending on APTMS amount, water−ethanol solvent percentage and Si−Au volume ratio. As an example, even relatively small 40-nm core-satellites (34 nm Si core + 4 nm Au shell) provided a much red shifted peak centered around 610 nm and having a large tail over 700 nm. The generation of the plasmonic peak is confirmed by modeling of [email protected] core-shells of relevant parameters via Mie theory. Being relatively small and exempt of any toxic impurity due to ultraclean laser synthesis, the [email protected] core-satellites promise a major advancement of imaging and phototherapy modalities based on plasmonic properties of nanomaterials.
Keywords: pulsed laser ablation in liquids; [email protected] core-satellite; core-shell; plasmonic nanoparticles; Mie theory; biomedical applications pulsed laser ablation in liquids; [email protected] core-satellite; core-shell; plasmonic nanoparticles; Mie theory; biomedical applications

Based on excitations of oscillations of free electrons (plasmons), Au-based nanomaterials can provide strong resonant absorption opening access to the development of novel photonic imaging and therapy modalities [1]. However, these modalities are difficult to implement using simple spherical Au nanoparticles (NP), as the plasmonic absorption band of these NPs is centered around 520−560 nm, which is out of the optical window of relative tissue transparency (650−1000 nm). To solve such a plasmonic mismatch problem, one has to design complex Au-based nanoarchitectures such as elongated Au nanorods [2] or dielectric-Au core-shell NPs [3,4], which are capable of red-tuning the plasmonic absorption toward the transparency window. In the nanorods, the position of such plasmonic feature is controlled by the aspect ratio of nanorod axes, while in the case of the core-shells it can be tuned by varying refractive index of the core and the ratio of their size/thickness.
The engineered nanorods and core-shells have already demonstrated high efficiency as sensitizers of light-induced hyperthermia cancer therapy [2,3,4] and as contrast agents in optical and photoacoustic imaging [5,6,7,8], but the employment of these nanostructures is not free of problems and challenges. One of the main problems is related to residual toxicity of these nanostructures arising due to their contamination by by-products during conventional chemical synthesis. Indeed, the nanorods are stabilized by non-biocompatible cetyltrimethylammonium bromide [9], while chemical synthesis of SiO2@Au core-shell NPs typically requires the involvement of hazardous raw products such as chloride, citrate, nitrate, and other organic solvents under severe acidic or alkaline pH conditions [3,4,10]. In addition, the elongated shape of the nanorods can complicate their transport in the organism [11], while only relatively large (>100–150 nm) SiO2@Au core-shells can provide absorption in the tissue transparency window, which complicates their excretion from the organism [12]. The required red-shift of the plasmonic peak could be reached at smaller core-shell sizes if a high refractive index material such as silicon (Si) is used a core instead of silica (SiO2) [13,14], but the fabrication of these structures by chemical methods is typically very complicated.
Pulsed laser ablation in liquids presents a physical alternative, which can offer a solution of the problem of purity of synthesized nanomaterials [15,16]. This approach relies on laser radiation-caused ablation of material from a solid target to initiate the generation of nanoclusters [17], which can then be released either into a gaseous medium to form a substrate-supported nanostructured film or a powder [18,19], or into a liquid medium to form a solution of NPs [20,21,22]. In all cases, the ablation can be performed in ultrapure environment (inert gas, deionized water, etc.) to exclude any contamination of the nanoparticle surface by side-products or stabilizing ligands, which is critically important for projected biomedical applications in vitro and in vivo [23,24]. As an example, we recently elaborated the technique of femtosecond (fs) laser ablation in water and organic media, which renders possible an efficient control of size characteristics of NPs from a variety of materials, including Au [22,25], Si [26,27], TiN [28,29] NPs. It is important that the laser-ablative technique can offer opportunities for the synthesis of complex structures such as core-shells. Such structures can be formed spontaneously during the ablation or co-ablation of materials having appropriate physico-chemical properties [30,31,32,33,34], or by the combination of laser ablation with an additional chemical reduction step using HAuCl4 solutions [35,36]. In particular, the latter approach was used for the fabrication of plasmonic SiO2@Au [35] and [email protected] [36] core-shell NPs. However, the first laser-ablative approach typically leads to a wide size and shape dispersion of formed composites, while the second combination approach still cannot avoid residual contamination by side products of the chemical reduction process.
This work is devoted to the search of alternative laser-assisted methodologies for the synthesis of contamination-free Au-based nanostructures having plasmonic feature in the region of relative tissue transparency. We describe a methodology for the synthesis of [email protected] core-satellite nanocomposites comprising of by relatively large Si core decorated by small Au NPs, which is based uniquely on bare laser-synthesized Si and Au NPs, and does not involve the chemical reduction step. In this methodology, the NPs are modified by organosilane APTMS molecules and then assembled into complex core-satellite structures. We show that such a geometry makes possible the generation of plasmonic absorption feature in the tissue transparency window even for relatively small sizes of core-satellite constituents (less than 50 nm). Optical properties of [email protected] core-satellite nanocomposites are consistent with calculations based on multi-layer Mie-theory modelization. Combined with a high purity of products involved in the assembling of the core-satellites, the synthesized structures look very promising for biomedical applications.

Solutions of colloidal Si NPs were obtained from 0.5 µm Si micropowder, which was preliminary prepared by mechanical milling of a Si wafer as it was described in [26,27]. Si powder was dispersed by a sonication for 15 min in a solution of 4.5 mL of water−ethanol at two concentrations of 0.2 mg.mL−1 and 0.4 mg.mL−1. In total, three ratios of 100−0, 50−50 and 0−100 of water−ethanol were tested. Si micropowder solutions were then fragmented for 60 min using radiation from a Yb:KGW femtosecond laser (Amplitude systems, France, wavelength 1025 nm, repetition rate 10 kHz, pulse duration 480 fs). The laser beam was focused in the center of a cuvette filled by micropowder solutions using a 75 mm lens. The homogenization of the solution was done by a magnetic stirrer. Unfragmented Si powder was removed by the centrifugation at 3500 rpm.min−1 for 20 min.
Au NPs were synthesized using the same laser in the ablation geometry, as previously described in [22,37]. For this, a gold target (99.99%, Sigma Aldrich, Saint-Quentin Fallavier, France) immersed in 7 mL of aqueous 0.1% NaCl solution was irradiated by a focused laser beam. To ensure a homogenous ablation process, the ablation target was continuously moved with 2 mm/s speed using motorized linear translational stages (Newport, Every, France).

The silanization step was performed by adding a solution of 3-aminopropyltrimethoxysilane (APTMS) (Sigma Aldrich, Saint-Quentin Fallavier, France) to Si NPs solutions at ambient condition. The obtained mixture was stirred at room temperature for 24 h. In total, three volumes of 1 mL, 0.5 mL and 80 µL of APTMS were tested to find the optimized condition of silanization.

The objective of this simulation is to predict the absorption efficiency of multilayered core-shell NPs. Absorption and scattering of spherical NP can be described analytically using Mie theory taking into account NP size and optical properties of material, as previously demonstrated in [38]. This model has been extended to describe multilayer or coated particles, as well as be generalized to find a solution for scattering by more than one particle in a field, as explained in [39]. Meunier’s group implemented a “matriochka” model using an open access code (Matlab) in order to optimize material, size, and shape of a NPs for nanocavitation applications [40]. On the other hand, Plain’s group studied the core−shell size ratio versus the variations of the absorption efficiency [14]. In this work, optical spectra effective cross-sections ( absorption, scattering, and extinction) were modeled by calculating the optical response of a multilayered particle (Si, Au and APTMS) with homogeneous fine-layers of a finite thickness. Absorption and scattering efficiencies present the ratio between effective and geometrical cross-sections (, ).
When the mean free path of electrons (MFP) is comparable with the shell thickness or to the particle diameter (a few nanometers), it is important to take into account the size-dependency of the dielectric function [14,41]. In this case, scattering of conduction band electrons on the particle surface results in a reduced effective mean free path () and the increase in the resonant linewidth of plasmon polariton (Γ) [42,43]. Mathiessen’s rule quantifies this effect through the relation: leading to a modified dielectric function [44,45]: where is the plasma frequency, is the Fermi velocity of conduction electrons (for Au, m/s), and is the plasmon polariton resonant linewidth for bulk material (for Au, Drude MFP ). The ratio may be classically interpreted as the effective rate of scattering of conduction band electrons on the particle surface. In other words, the surface scattering can reduce the absorption efficiency and broaden the plasmon resonance.
The shell geometry also affects the surface scattering. For a spherical shell geometry within the linearized thin shell limit, at which ≈ twice the shell thickness, the billiard’s expression of MFP is written as [43]: where and are radii of the inner and outer surfaces of the shell, respectively. The relations (2) and (1) were implemented in to take in account the effect of size and shape of fine-layered spherical NP.

In summary, we demonstrated a laser-assisted methodology for the fabrication of [email protected] core-satellite nanostructures, comprising of a Si core covered with small Au nanoparticles (NP). The methodology employed laser ablative synthesis of Si and Au NPs in water−ethanol solutions, followed by their chemical modification and linking via organsilane APTMS molecules. Several parameters such as APTMS concentration and type of synthesis medium were optimized to obtain stable [email protected] nanocomposites having a relatively small size (less than 40 nm). The core-satellites had a strong plasmonic peak centered around 600–610 nm with a long tail over 700–800 nm, which is red-shifted compared to spherical Au NPs and overlaps with biological transparency window. The generation of this peak was consistent with results of theoretical modeling using Mie theory. Being relatively small compared to commercial silica-gold nanoshells and exempt of any toxic impurity due to ultraclean laser synthesis, the [email protected] core-satellites promise the advancement of plasmonic modalities for cancer theranostics.

A.A.-K. thanks the International Associated Laboratory (LIA) MINOS project and GRAVITY project of the ITMO “Plan Cancer 2014–2019” INSERM program. The authors acknowledge contribution of the Russian Science Foundation (Project 19-72-30012) for the elaboration of protocols for the fabrication of highly calibrated nanoparticles. 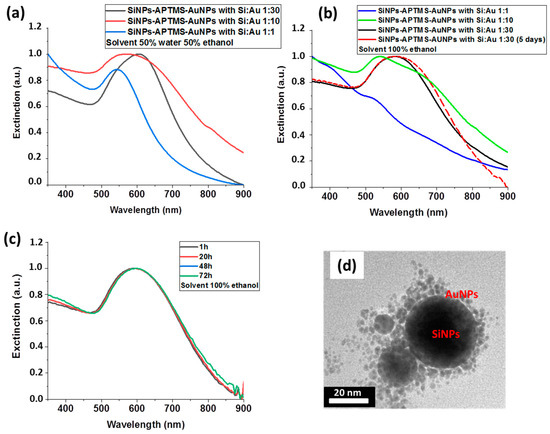