Effect of the Anionic Counterpart: Molybdate vs. Tungstate in Energy Storage for Pseudo-Capacitor Applications
Next Article in Special Issue

The Lebedev process, in which ethanol is catalytically converted into 1,3-butadiene, is an alternative process for the production of this commodity chemical. Silica–magnesia (SiO2–MgO) is a benchmark catalyst for the Lebedev process. Among the different preparation methods, the SiO2–MgO catalysts prepared by wet-kneading typically perform best owing to the surface magnesium silicates formed during wet-kneading. Although the thermal treatment is of pivotal importance as a last step in the catalyst preparation, the effect of the calcination temperature of the wet-kneaded SiO2–MgO on the Lebedev process has not been clarified yet. Here, we prepared and characterized in detail a series of wet-kneaded SiO2–MgO catalysts using varying calcination temperatures. We find that the thermal treatment largely influences the type of magnesium silicates, which have different catalytic properties. Our results suggest that the structurally ill-defined amorphous magnesium silicates and lizardite are responsible for the production of ethylene. Further, we argue that forsterite, which has been conventionally considered detrimental for the formation of ethylene, favors the formation of butadiene, especially when combined with stevensite. View Full-Text
Keywords: ethanol; butadiene; Lebedev process; wet-kneading; silica–magnesia; magnesium silicate ethanol; butadiene; Lebedev process; wet-kneading; silica–magnesia; magnesium silicate
►▼ Show Figures 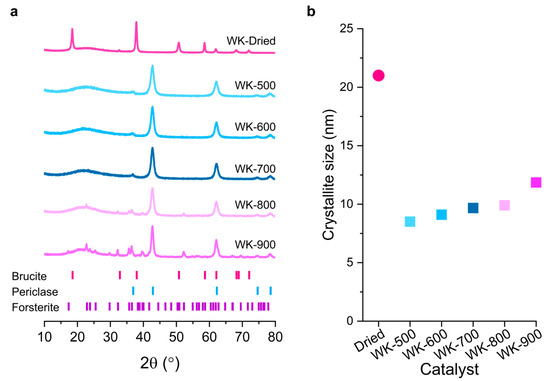