Comparison of Nanomaterials with Other Unconventional Materials Used as Additives for Soil Improvement in the Context of Sustainable Development: A Review
Next Article in Special Issue

Black phosphorus is one of the emerging members of two-dimensional (2D) materials which has recently entered the biomedical field. Its anisotropic properties and infrared bandgap have enabled researchers to discover its applicability in several fields including optoelectronics, 3D printing, bioimaging, and others. Characterization techniques such as Raman spectroscopy have revealed the structural information of Black phosphorus (BP) along with its fundamental properties, such as the behavior of its photons and electrons. The present review provides an overview of synthetic approaches and properties of BP, in addition to a detailed discussion about various types of surface modifications available for overcoming the stability-related drawbacks and for imparting targeting ability to synthesized nanoplatforms. The review further gives an overview of multiple characterization techniques such as spectroscopic, thermal, optical, and electron microscopic techniques for providing an insight into its fundamental properties. These characterization techniques are not only important for the analysis of the synthesized BP but also play a vital role in assessing the doping as well as the structural integrity of BP-based nanocomposites. The potential role of BP and BP-based nanocomposites for biomedical applications specifically, in the fields of drug delivery, 3D printing, and wound dressing, have been discussed in detail to provide an insight into the multifunctional role of BP-based nanoplatforms for the management of various diseases, including cancer therapy. The review further sheds light on the role of BP-based 2D platforms such as BP nanosheets along with BP-based 0D platforms—i.e., BP quantum dots in the field of therapy and bioimaging of cancer using techniques such as photoacoustic imaging and fluorescence imaging. Although the review inculcates the multimodal therapeutic as well as imaging role of BP, there is still research going on in this field which will help in the development of BP-based theranostic platforms not only for cancer therapy, but various other diseases. View Full-Text
Keywords: bioimaging; wound healing; 3D printing; surface modification; characterization bioimaging; wound healing; 3D printing; surface modification; characterization
►▼ Show Figures 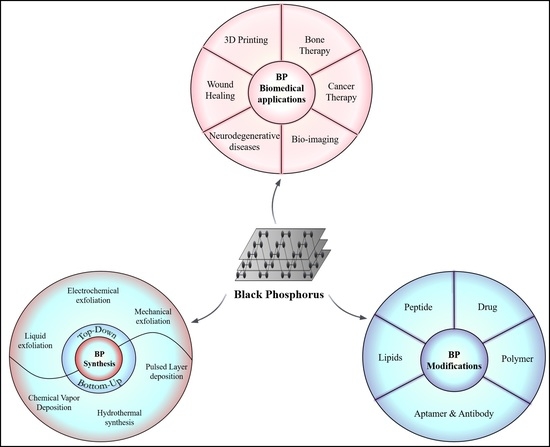