Nowadays, the main share of the Li-ion market is dominated by cells based on carbon anodes. This phenomenon results mostly from a relatively low price and a reasonable capacity of carbonaceous materials (372 mAh/g for graphite [1]). Despite the constant search for a better anode, graphite (natural or synthetic) is still the most relevant in Li-ion battery [2]. However, this material has also some disadvantages. Among the flaws of natural graphite are its limited resources and non-renewability. Furthermore, the process of extracting graphite from the earth can be hazardous and impoverish the natural surroundings. On the other hand, artificial graphite requires harsh synthesis conditions and big energy expenditure which leads to the greater emission of harmful gases [3,4]. Thus, along with the quest for low-pollution variants in the world facing a climate catastrophe, Li-ion industry, as a critical part of the energy production system, has to follow up to the upcoming changes and impose the environmental requirements [5,6]. Hence, there is a need to find and develop other alternatives for conventional anode material, that allow to harness the renewable energy [7].
There are several renewable resources that can be converted into carbonaceous materials such as rice grains [8], pine cones/needles, oak leaves, orange peels [9], pollens [10], mushrooms [11] or algae [12]. Nonetheless, these applied in Li-ion cells as negative electrode can also often require a high pressure synthesis condition [7]; complex, multi-step treatment [11]; or very high temperatures during thermal treatment [11,13]. Therefore, among them, the interesting direction in Li-ion batteries studies is the application of starch-based carbon aerogels (CAGs), and what is associated with their unique features that make them competitive for energy storage systems in terms of their properties, economy and ecology [14,15,16,17,18]. They are obtained through eco-friendly, water-based synthesis. Their facile preparation process including gelatinization, solvent exchange, low-temperature drying under ambient pressure and pyrolysis, requires relatively low energy expense (carbonization at maximum 700 °C), in comparison to the currently used carbonaceous anodes (thermal treatment at 2500 °C for synthetic graphite [4] and over 1000 °C for many types of hard carbons [19]).
Another viable natural source for Li-ion batteries can be the gum-like substance, oozing from branches and stems of Acacia Senegal mature trees—gum arabic or gum Acacia (GA) [20]. Its chemical composition varies depending on the source, nonetheless, it mainly consists of a polysaccharide mixture including galactose, arabinose, rhamnose and 4-O-methyl glucuronic acid. Although, most often, gum arabic can be found in the confectionary industry [20], it can be also incorporated in the energy storage systems including its use as a binder for electrode composites [21], a precursor for pyrolytic carbon layers in advanced oxide anodes [22] or a self-healing agent for Si-based novel anodes [23].
Our recent studies have led us to an alternative application of gum arabic as a structuring additive for bio-derived, starch-based carbon aerogels for Li-ion batteries, which is the subject of the present work. However, the systems consisting of starch and non-starch hydrocolloid gums has been widely studied, since they are extensively used in food application [24,25,26,27,28,29,30], they have never been investigated in terms of their usage in energy storage systems. The addition of gum to starch is one of the most popular ways to modify the starch properties (including maintaining the desirable structural, textural and rheological characteristics) and the interactions between these two components are quite well understood. Gum arabic is known for having functionally structural components and that is why it has been reported as an encapsulating and emulsifying agent that plays an important role in the structuring and thickening of the starch-based system while modifying its rheological properties [25,27,30]. Therefore, the GA additive during carbon aerogel synthesis should influence the properties of the resulting organic starch aerogels and hence the carbon materials derived from such a precursor, which ought to clearly translate into electrochemical results. Undoubtedly, the enhanced electrochemical properties of modified CAG materials can open another interesting usage for this versatile, natural resource. An evaluation of the electrochemical performance of GA-structured carbon aerogels as a novel, eco-friendly Li-ion anodes is the main concern of presented study.

The modified carbon aerogels, based on potato starch (Sigma Aldrich, Saint Louis, MO, USA), were obtained via a gelatinization process described in detail in our previous work [14,15,16,17,18]. A gum arabic (Avantor Performance Materials Poland S.A., Gliwice, Poland, 99%), as a structuring additive, was introduced during starch hydrogel preparation, in quantities of 1% w/w, 5% w/w, 10% w/w and 20% w/w. Briefly, potato starch with gum arabic were dispersed in distilled water and the suspensions were stirred and heated in an oil bath until the gelatinization temperature was reached. Then, the samples were poured over with ethanol solution (Avantor Performance Materials Poland S.A., Gliwice, Poland, 96%) and left for 5 days in order to replace the water trapped inside the pores. After the solvent exchange, the obtained gels were dried at 50 °C under atmospheric pressure and then subjected to a thermal treatment process at 700 °C, under argon (Air Products, Allentown, PA, USA, 99.999%) flow, for 6 h, with a constant heating rate (2 °C/min).
The phase purity of the studied materials was investigated by X-ray powder diffraction (XRD) using a Bruker D2 PHASER diffractometer (Billerica, MA, USA) with a Cu lamp Kα1 radiation, λ = 0.154184 nm. By the application of the elemental analysis (EA)—performed on the micro analyzer Vario MICRO cube coupled with microbalance (Elementar)—the carbon/hydrogen/nitrogen (CHN) content was measured.
The galvanostatic charging/discharging cycling tests (GCDT) were conducted on the ATLAS 1361 MPG&T multichannel testing system (ATLAS–SOLLICH, Rębiechowo, Poland), to investigate the impact of GA addition on the electrochemical performance and stability of CAG-based cells. For the most effective sample, the additional cycling at 3 °C and 61 °C were performed. All measurements were carried out between 0.001 and 3.0 V, under different current loads (from C/20 to 20C), with metallic lithium (Sigma Aldrich, Saint Louis, MO, USA, 99.9%) as a reference, the solution of 1M lithium hexafluorophosphate (LiPF6) dissolved in a mixture of ethylene carbonate with diethyl carbonate (50/50 v/v, Sigma-Aldrich, Saint Louis, MO, USA, battery grade) as an electrolyte, and a trilaminate of polypropylene/polyethylene/polypropylene film (Celgard 2325) (Celgard LLC, Charlotte, NC, USA) with two porous glass microfiber filters (Whatman GF/F) (Sigma Aldrich, Saint Louis, MO, USA) as separators. The electrodes were fabricated by mixing 90 wt% of active material with 10 wt% of binder-polyvinylidene fluoride (Sigma Aldrich, Saint Louis, MO, USA). The mixture was prepared as a slurry in N-methyl-2-pyrrolidone (NMP) solvent (Sigma Aldrich, Saint Louis, MO, USA, ≤99.5%), spread onto copper foil and dried in an air-oven at 120 °C for 48 h under ambient pressure. The R2032 coin-type half cells were assembled in an argon-filled glove box (MBraun glove box, Garching, Germany) with a high-purity atmosphere (H2O and O2 < 0.1 ppm). For all cells, the mass loading of active material on the electrode was equal to 1.18 ± 0.09 mg/cm2.
Additionally, the cyclic voltammetry (CV) measurements were carried out on the AUTOLAB PGSTAT302N/FRA2 potentiostat/galvanostat (Metrohm Autolab, Utrecht, The Netherlands), starting from an open circuit voltage (OCV), by applying 0.1 mV/s scan rate, in the voltage range from 0.001 V to 3 V.

As it is known, gum arabic is commonly used in the food industry as an emulsifying agent, which structures and thickens the starch-based systems by changing their parameters. It seems that when it is applied to Li-ion cells, GA also plays such a role. Gum arabic affects starch precursor rheological properties (as the amount of GA increases, the gelatinization process goes faster) causing the stabilization of organic aerogel structure and probably allows to achieve the desirable structural, textural and morphological characteristics of modified carbon aerogel samples for energy storage. The presented results suggest that GA may act as a structural promoter improving precursor rearranging for the graphitic domains’ nuclei growth. If the GA addition is above 1% w/w, the domains disorder becomes slightly larger, due to higher amount of concurrent nuclei growth, what causes a gradual deterioration in modified aerogels’ electrochemical properties with an increase in a gum amount. However, for CAG_PS+1%GA, there are no visible changes in the organization of the graphitic domains in comparison to pristine CAG_PS. It is possible that the appropriate ordering in the structure, the effect of which is not visible on XRD, most probably low range local ordering, has been achieved. What is more, for this sample, the operational parameters such as specific capacity and stability are significantly improved. There is also a need to mention that GA does not show the electrochemical activity itself and seems not to be involved directly in the electrochemical work. Therefore, all the observed differences in the electrochemical characteristics of the samples do not result directly from the processes taking place in the cell, but from the specific structure, morphology and porosity of the used, modified carbon materials, which of course influences the overall cell performance. However, some questions still remain unclear and it needs to be resolved during further, thorough research. 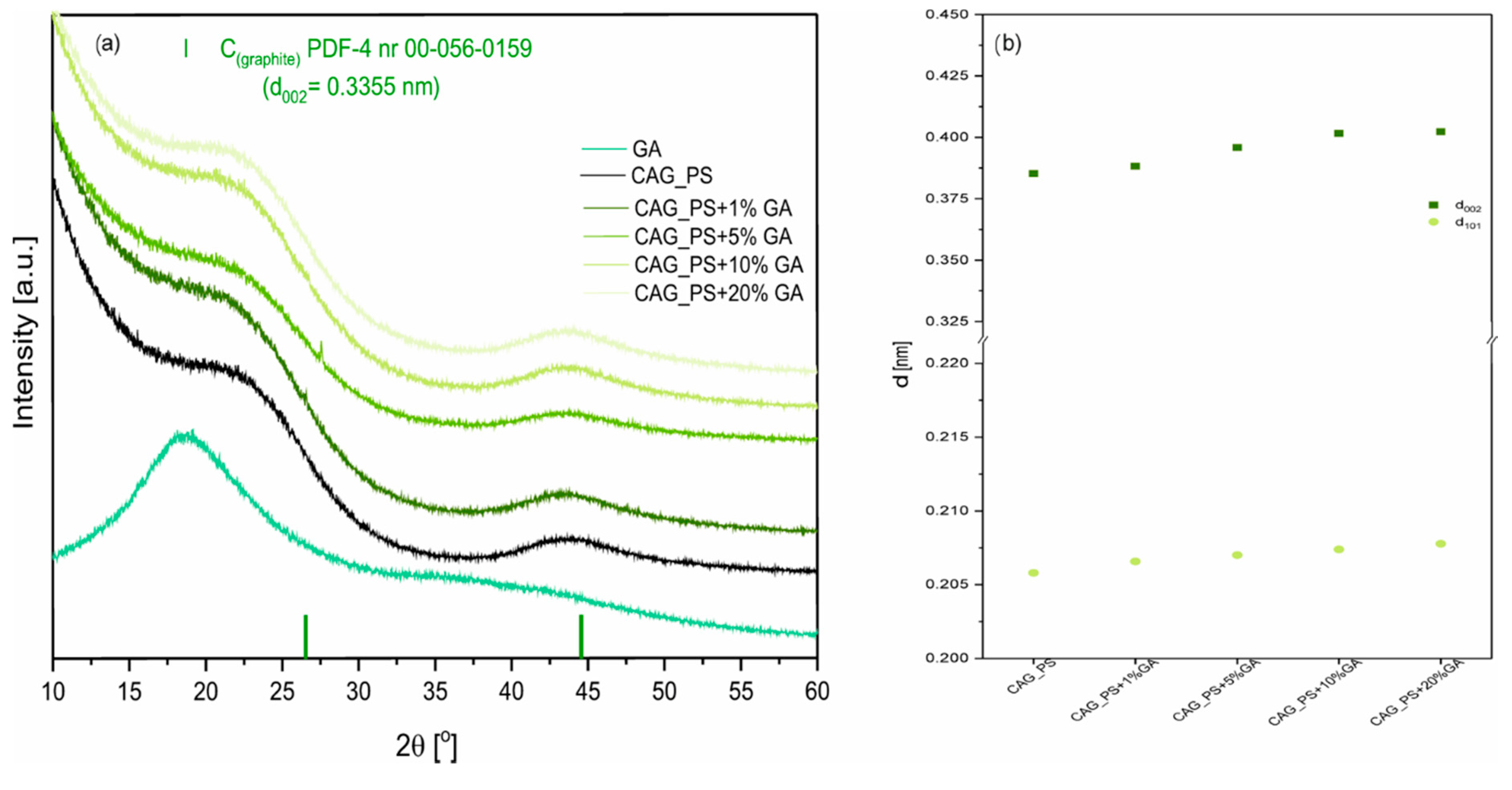