Since Grätzel et al. developed the titanium dioxide (TiO2)-based dye-sensitized solar cell (DSSC) in 1991 [1], the DSSC has emerged as a promising photovoltaic device, due to its promising power conversion efficiency (PCE), low fabrication cost, and low toxicity [2,3,4,5]. Hitherto, it has been reported that TiO2-based DSSCs achieved a notable PCE of over 14% [6]. However, further improvements in PCE are difficult to achieve due to some disadvantages in current TiO2-based DSSCs, such as the low carrier transportation rate of TiO2 resulting from its low electron mobility, as well as the difficulty in fabricating TiO2 nanostructures with a large surface-to-volume ratio [7,8]. Recently, zinc oxide (ZnO) has been widely investigated in different types of solar cells [9,10,11]. As an alternative photoanode material of DSSCs, ZnO has attracted much attention because it exhibits a similar bandgap and electron injection process from excited dye molecules to TiO2 [12,13]. Moreover, the electron mobility of ZnO (200~1000 cm2/(V∙s)) is much higher than that of TiO2 (0.1~4 cm2/(V∙s)) [14], which will enhance electron transportation. Additionally, compared with TiO2, it is much easier to fabricate ZnO as various nanostructures to enlarge the surface-to-volume ratio [15]. Therefore, ZnO-based nanostructures and nanocomposites have much potential for application as a photoanode material to improve the PCE of DSSC.
However, the poor chemical stability of ZnO in the acidic dye solution and electrolyte solution of DSSCs has hampered its wider applicability as a photoanode material in DSSCs [16]. Additionally, defects easily form in ZnO, which increases the Zn2+/dye complex and the electron–hole recombination at the interface [17,18,19,20]. In order to overcome the shortcomings of ZnO-based photoanodes, one solution is to coat a chemically stable shell onto the surface of as-deposited ZnO. This core–shell structure can passivate ZnO’s surface to reduce the complex and form an energy barrier, thereby reducing the electron–hole recombination [21]. Among different ZnO-based nanocomposites, one of the most promising structures is ZnO–TiO2’s core–shell nanostructure. According to the literature [22,23,24,25], the PCE of ZnO photoanode-based DSSCs can be improved by about one to five times by replacing the ZnO photoanode with a corresponding ZnO–TiO2 core–shell nanostructure. It is reported that ZnO’s nanostructure could be coated with TiO2 thin film using the sol–gel method [26], solution method [27], and atomic layer deposition [28]. However, the difficulties that arise with the uniformity and also in controlling the thickness of the TiO2 layer are still unsolved.
Based on our previous study, DSSCs with a high PCE could be achieved by controlling the vertical alignment of ZnO nanorods and the quality of transparent conductive substrates [29,30,31]. In addition, mist chemical vapor deposition (mist CVD) has been proven to be an effective method for modifying ZnO nanorods [32,33]. In this study, ZnO nanorods with vertical alignment were fabricated by a multi-annealing process in reducing ambient. Compared with ZnO nanorods fabricated by other methods, the ZnO nanorods fabricated by multi-annealing showed a higher concentration of oxygen vacancies. The oxygen vacancies were generated due to the effect of reducing ambient and they enhanced the conductivity of ZnO nanorods. However, the oxygen vacancies on the surface of ZnO nanorods will trigger the recombination of electrons. In order to solve this issue, the TiO2 thin layer was coated on ZnO nanorods by the mist CVD method to prevent the recombination of electrons and enhance the chemical stability of electrodes. Compared with other methods, the combination of the multiple annealing process and mist CVD method is an effective method to fabricate ZnO–TiO2 core–shell nanorods applied as photoelectrodes for DSSCs. Figure 1 shows the fabrication mechanism and working principle of ZnO–TiO2 core–shell nanorods. The electrons are injected from excited dye molecules to the conduction band (CB) of TiO2. Then, the electrons are transferred from the CB of TiO2 to the CB of ZnO. The ZnO core has high electron mobility and the TiO2 shell can protect the ZnO core from corrosion and suppress the recombination of electrons. After coating, the obtained ZnO–TiO2 core–shell nanorods, as well as the as-deposited ZnO nanorods, were used to fabricate DSSCs for comparison. The effects of TiO2 coating on the properties of ZnO–TiO2 core–shell nanorods were investigated in detail.

The aluminum-doped ZnO (AZO, 300 nm) thin films were deposited on alkali-free glass sheets (Eagle XG, Corning Inc., Corning, NY, USA) using a conventional radio frequency (RF, 13.56 MHz) magnetron sputtering system with an AZO target (2 wt.% Al2O3). Following the deposition of AZO films, ZnO films with a 500 nm thickness were deposited on AZO by the same sputtering system with a ZnO target (5N). Table 1 shows the deposition conditions of the AZO film and ZnO film. Argon was selected as the working gas, the flow rate of which was maintained at 30 sccm. During the deposition, the working distance and temperature were set and maintained at 60 mm and 150 °C, respectively. The pressure and RF power for AZO film deposition were maintained at 1 Pa and 60 W. For the deposition of ZnO, the pressure and RF power were held at 7 Pa and 180 W.

After sputtering deposition, the fabricated ZnO films were treated using a multi-annealing process in a conventional annealing furnace. As shown in Table 2, the temperature was firstly kept at 300 °C for 2 h in a forming gas ambient (H2:N2 = 1.96%) to increase the density of zinc seeds on the surface. Then, the temperature was increased to 450 °C and kept at this level for 3 h for forming gas to produce the ZnO nanorods. Before the third forming gas annealing process, oxygen was introduced into the furnace for 40 min for surface oxidation to avoid an excessive reducing reaction. For safety considerations, nitrogen was introduced for 5 min between the forming gas and oxygen annealing processes.

Finally, TiO2 film was coated onto the surface of the fabricated ZnO nanorods by a mist CVD system. Table 3 shows the deposition condition of the TiO2 film. An ethanolic titanium tetraisopropoxide (TTIP, purity > 95.0%, Wako Pure Chemical Industries, Ltd., Osaka, Japan) solution with a concentration of 0.10 mol/L was prepared as the precursor solution. Mist droplets were generated from the precursor solution by ultrasonic atomization (2.4 MHz) and transferred to the reaction chamber by compressed air. The sample of as-deposited ZnO nanorods was placed in the reaction chamber and heated to 450 °C during the coating process.

The obtained ZnO–TiO2 core–shell nanorods, as well as the as-deposited ZnO nanorods, were applied as photoanodes to fabricate DSSCs for comparison. N719 (Sigma Aldrich, St. Louis, MO, USA) was used as a dye sensitizer. The photoanodes were immersed in an ethanoic dye solution with a concentration of 5 × 10−4 mol/L for 12 h. A solution containing 0.10 mol/L lithium iodine and 0.05 mol/L iodine was used as the electrolyte. A platinum-coated indium-doped tin oxide film on glass was applied as the counter-electrode. Six samples of DSSCs were fabricated and investigated to confirm their reproducibility.

Well-arrayed ZnO–TiO2 core–shell nanorods were successfully synthesized on AZO substrates by RF magnetron sputtering, multi-annealing, and the mist CVD method. The morphology of the ZnO nanorods was significantly changed by coating with a TiO2 film. After forming the ZnO–TiO2 core–shell structures, the diameter and surface-to-volume ratio of the nanorods were greatly increased. The PCE of DSSCs applying ZnO nanorods as photoanodes was increased two-fold from 1.31% to 2.68% by coating with TiO2.

This research was funded by the Ministry of Education, Culture, Sports, Science, and Technology (MEXT) in Japan, grant number [17K06394].

The authors gratefully acknowledge the financial support by Grant-in-Aid for Scientific Research from the Ministry of Education, Culture, Sports, Science and Technology (MEXT), Japan. The authors greatly appreciate the assistance of Associate Professor Noriko Nitta in supporting the TEM measurement. 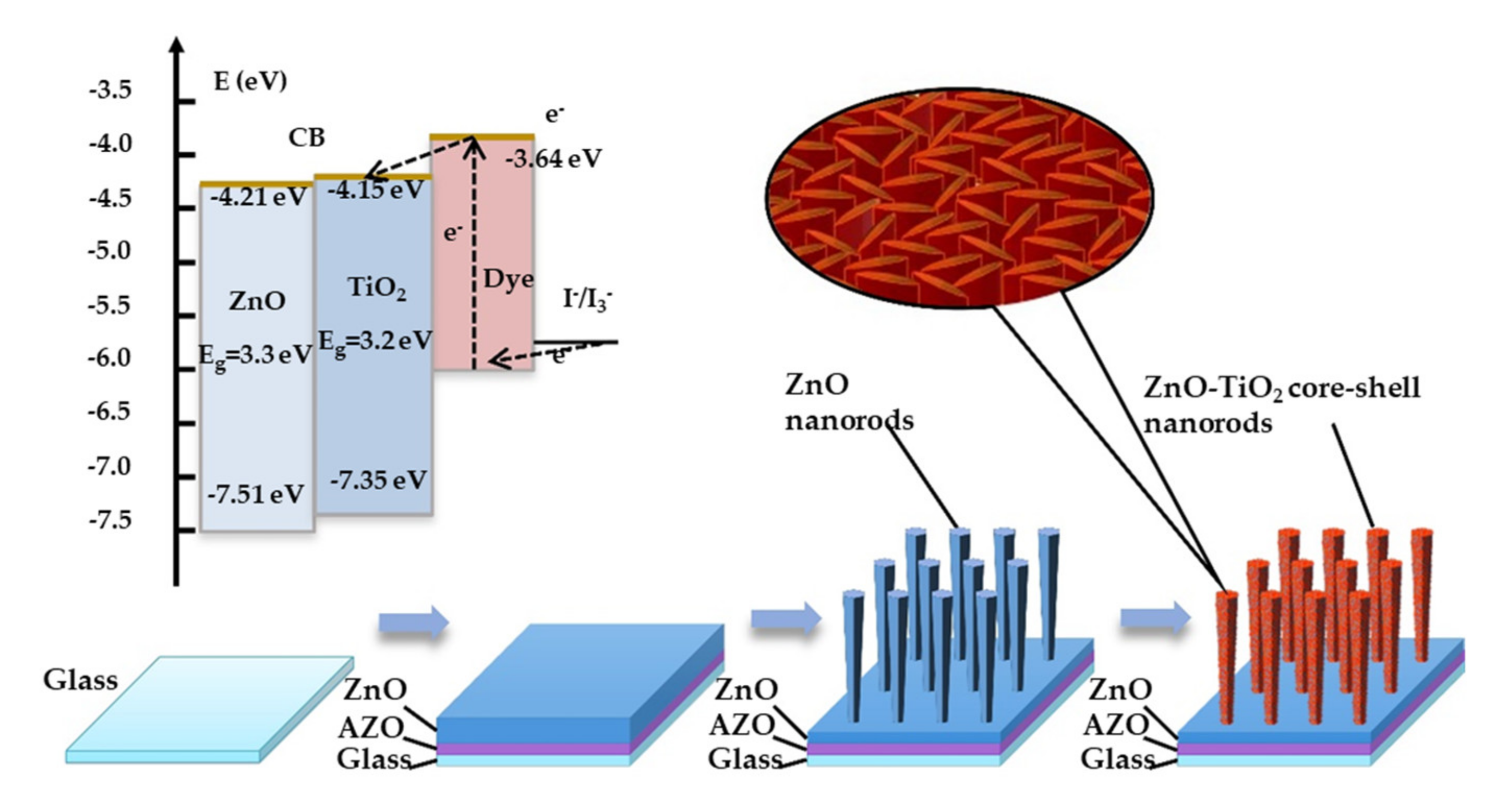 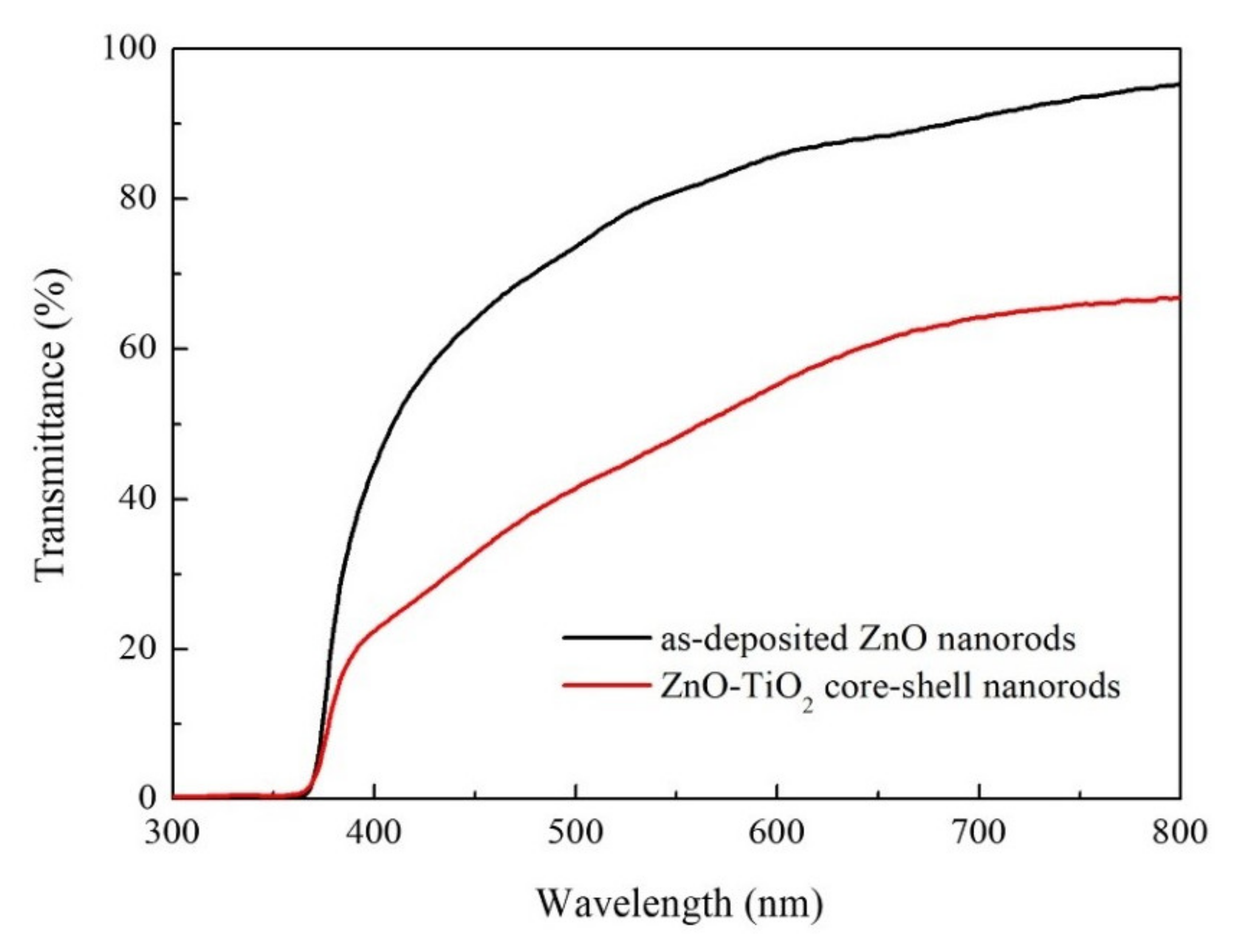 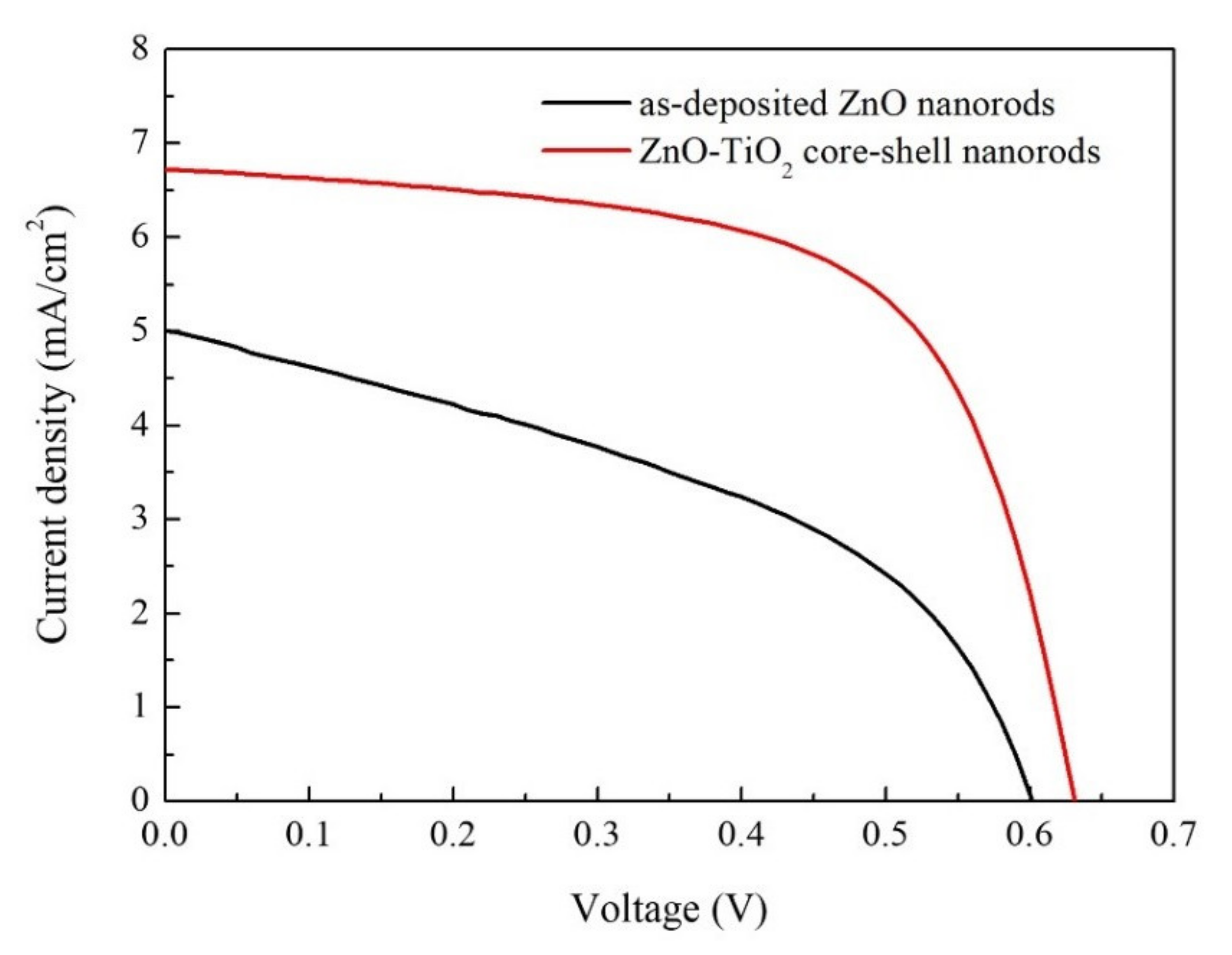