PMMA-TiO2 Fibers for the Photocatalytic Degradation of Water Pollutants

There is nowadays a sustained research interest for developing new magnetic materials without rare earth elements (RE), while taking into account the critical raw materials shortage of these materials and their contaminating effects on the environment. The European Union, through its EU Raw Materials Initiative [1], has warned about the fact that several raw materials, including heavy and light RE, are critical for the EU because risks of supply shortage, and their impacts on the economy are higher than those of most of the other raw materials. Especially, the end-of-life recycling input rate for rare earths is listed to be only at the level of 3% [2]. As a response to these challenges, the research community is searching for alternatives for RE-free magnets. Among the investigated systems, the alloys exhibiting L10 tetragonal phase, such as FePt or ternary alloys derived from FePt, show most promising magnetic properties. FePt alloys are also of great interest because of their high operating temperatures—higher than that of Nd-Fe-B magnets—and their high resistance to corrosion [3]. A technological barrier that impedes the adoption of such systems is related to the fact that the tetragonal, hard magnetic L10, the phase of interest, is only formed after post-synthesis annealing of the alloys [4]. Several attempts to circumvent this barrier included slight stoichiometry changes in the initial binary alloys or the addition of several elements such as Ag [5], Mn [6] and B [7]. We have shown [5] that adding both Ag and B to the binary FePt alloy led to the direct formation of L10 phase, with high coercivity and without the need for post-synthesis annealing of as-cast alloys. We have also previously shown that Mn addition in small amounts (36 at%) creates better stability of L10 phase, and moreover, it promotes the occurrence of both binary FePt and ternary FeMnPt L10 phases, making the alloys highly coercive [6,8]. Several other works reported show the intense focus on these alloys, as a pertinent alternative for the RE permanent magnets [9,10,11,12,13,14]. For instance, Sun et al. [9] investigated by X-ray absorption near-edge spectroscopy FeMnPt films and observed that by increasing Mn doping the ordering parameter of the L10 phase decreases. The same effect was observed also by Xu et al. [10], who investigated epitaxial FeMnPt films and concluded that the increasing of Mn at 15 at% causes not only a decrease in the ordering parameter of the L10 phase but also a decrease of the Curie temperature of the magnetic phase, accompanied by a decrease of the magnetic anisotropy of the films. Manoharan et al. [11] studied the magnetic and structural properties of highly ordered epitaxial Fe50−xMnxPt50 thin films and found a significant increase in the coercivity for a Mn content of 12 at%. They attributed the increase in coercivity to the tetragonal distortion, since they obtained a c/a ratio larger than the expected value for ferromagnetically-ordered Mn atoms in the Mn sublattice of the L10 phase. As seen, there is a large preoccupation regarding the stability of the tetragonal L10 phase in FeMnPt. Most of the studies regarding the correlation of magnetic performances to the stoichiometry of the FeMnPt alloys have been done theoretically by means of first principles DFT calculations [12,13] or ab initio [14]; therefore, there is a certain need to also assess experimentally the stability of the L10 phase in FeMnPt alloys.
In the present paper we present a complex characterization and a structural stability study of the FeMnPt alloys system. For this, a mix of unconventional characterization methods, such as proton induced X-ray emission (PIXE) and high-temperature synchrotron radiation diffraction (HTSRD), and conventional methods, such as powder X-ray diffraction and SQUID magnetometry, were employed in order to derive the structure and magnetic properties and to prove the structural stability of the L10 phase.

For the method of synthesis of the FeMnPt alloys, ultra-rapid solidification from the melt was chosen to comply with the requirements of conserving the best chances for the formation of a tetragonal, ordered, L10 phase in an alloy that typically crystallizes in a cubic, disordered A1. The ultra-rapid solidification from the melt, or melt spinning, is an out-of-equilibrium synthesis method which has the strong advantage that it preserves upon solidification; metastable phases that are only able to occur in the molten state, according to phase diagrams. As mentioned above, in order to improve chances of formation of L10 phase via grain refinement at the nanoscale and to promote formation of a microstructure made of L10 grains separated by less ordered intergranular regions, Mn addition in the binary FePt starting alloy has been considered. It has been also argued [10] that Mn addition in FePt binary alloy promotes the reduction of the temperature at which the disorder–order phase transition occurs. Moreover, in order to make these alloys more appealing from the raw material costs point of view, the Pt content has been reduced from around 50 at%, which is the classic content of the equiatomic FePt composition, to only about 35 at%. It is noteworthy that 35% is the lower limit for formation of L10 phase, according to the FePt phase diagram [4]. We have adopted an experimental protocol in which a small amount of Pt is substituted by 8 at% Mn. A smaller amount would probably not result in the desired effect and a larger one may result in the creation of additional phases, which can be detrimental to the overall magnetic properties of the alloy.
Upon consideration of the above-mentioned arguments, ternary alloys with composition Fe57Mn8Pt35 were prepared by the high-speed melt solidification method, starting from basic materials with 99.9+% purity (Alfa Aesar GmbH, Karlsruhe, Germany). Elemental flakes have been melted in quartz crucibles in an induction furnace and the procedure was repeated three times to ensure a better homogeneity of the alloy. Ultra-rapid solidification from the melt was performed using a Buhler melt spinner facility in a protective Ar atmosphere. The melt was subsequently purged through a 5 mm nozzle onto a fast rotating (30 m/s), 50 cm diameter Cu wheel and solidified instantly (106 K/s cooling rate) in the form of long, continuous, 5 mm wide, 30 microns thick, homogeneous ribbons. The as-cast ribbons were subsequently subjected to annealing in temperature-controlled oven, under vacuum (10−4 torr). For annealing, two sets of experimental parameters were chosen: 600 °C for 1 h and 700 °C for 1 h, with a heating rate of 5 K/min and cooling down to room temperature in vacuum.
The composition of the alloy has been verified using proton induced X-ray emission spectroscopy PIXE. PIXE analysis has been carried out using a 3 MeV proton beam generated with the aid of the 3 MV tandetron accelerator of the Horia Hulubei National Institute of Physics and Nuclear Engineering (NIPNE) Bucharest. The detection system includes a high purity Ge detector with an energy resolution of 150 eV at 5.9 keV for the X-rays. The steel target was mounted in the irradiation chamber at 45° with respect to the beam and the direction of both detectors. A thin surface barrier silicon detector was also placed in the chamber, at 135° with respect to the beam direction, in order to detect the backscattered protons, needed for spectra normalization. The X-ray, γ-ray and particle spectra were simultaneously collected and processed off-line.
In order to characterize the structural and magnetic properties, X-ray diffraction and SQUID magnetometry have been utilized. The structure of the as-cast and annealed ribbons was investigated by X-ray diffraction using a Bruker D8 Advanced diffractometer (Billerica, MA, USA). Diffraction patterns obtained were subsequently analyzed and fitted using a full-profile Rietveld-type analysis, powered by MAUD software [15]. The structural stability and phase evolution with temperature have been monitored using synchrotron X-ray diffraction. To determine the evolution with temperature of the phase structure in our alloy and to follow the disorder–order phase transformation, a temperature-dependent synchrotron X-ray diffraction experiment, conducted between 50 °C and 800 °C, was performed at the Materials Characterization by X-ray diffraction (MCX) beamline, Elettra Synchrotron Facility, Trieste, Italy, using monochromatic radiation (λ = 0.0826 nm).
Magnetometry measurements have been performed in order to determine the magnetic properties of the as-cast and annealed alloys. Initial magnetization vs. applied field and the hysteresis loops were measured at 5 K and 300 K with a magnetic field applied parallel to the ribbons plane, using a Quantum Design SQUID magnetometer (Quantum Design GmbH, Darmstadt, Germany) in RSO (reciprocate sample option) mode.

In order to assess the effect of Mn addition on the structural stability of L10 FePt phase, a Fe57Mn8Pt35 granular alloy has been synthesized in the shape of melt-spun ribbons and subsequently annealed at 600 °C and 700 °C for promoting the formation of single phase L10 tetragonal, hard magnetic phase. A mix of unconventional and classic characterization techniques has been employed for compositional, structural and magnetic analysis of the as-cast and annealed samples. Proton-induced X-ray emission spectroscopy was employed in order to assess the compositional effects in the ternary alloy while powder X-ray diffraction followed by full profile Rietveld-type analysis was used for structural and crystallographic analysis. The disorder–order phase transformation and the stability of the hard magnetic L10 phase were monitored over a large temperature range (50–800 °C) using temperature-dependent synchrotron X-ray diffraction. It was found that there is a large interval of stability of the L10 phase formed upon the disorder–order phase transformation. The Mn addition was found to promote a higher ordering of the L10 phase, as proven by the remarkably high tetragonality ratio c/a parameter. The absence of crystal growth and unit cell expansion up to the highest temperature investigated reveals that the Mn addition stabilizes the formed L10 structure further. Magnetic characterization has revealed, in total agreement with the structural data, that a strong coercive field is obtained for a sample wherein single phase hard magnetic tetragonal L10 exists. These findings are very promising in view of use of such materials as a future class of rare earth free permanent magnets that are capable of operating in stable and reproducible manner in applications that require extreme operation conditions. 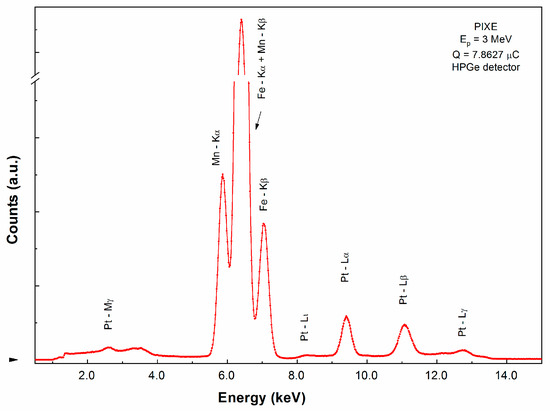 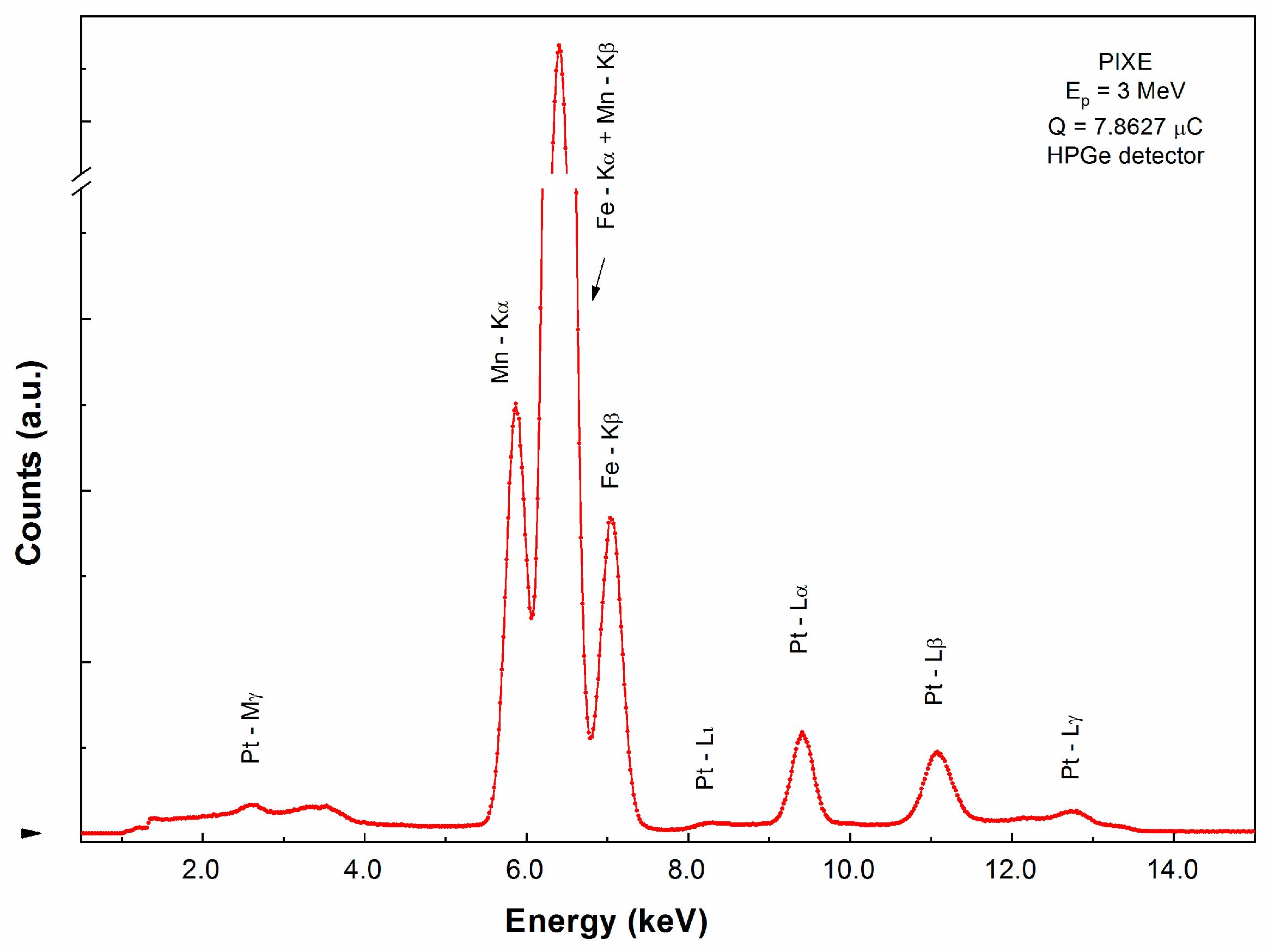 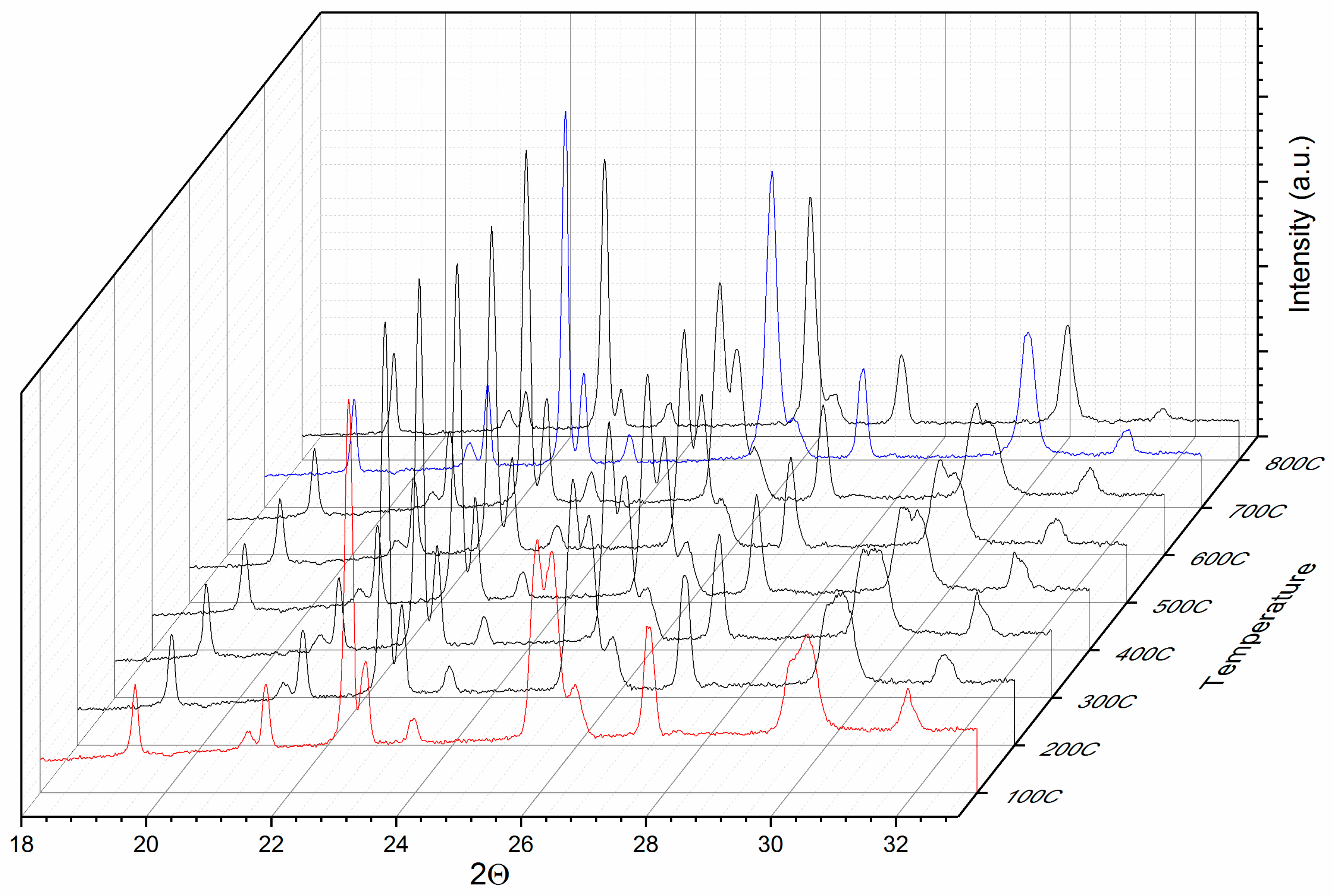 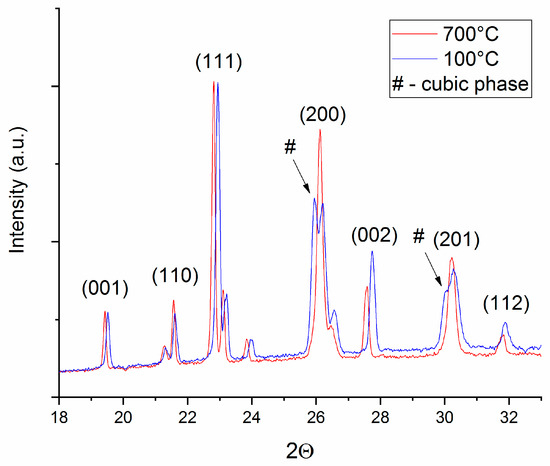 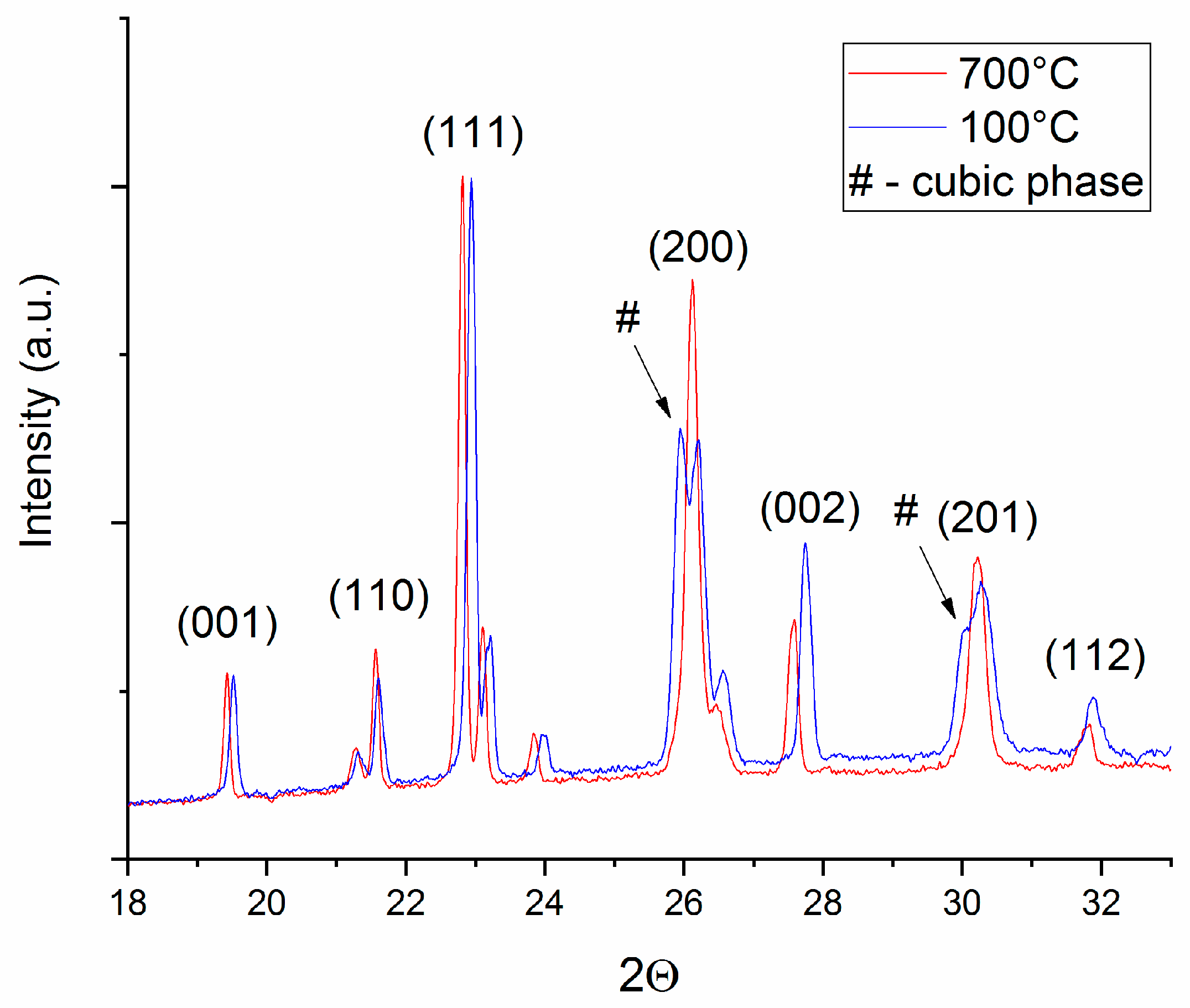 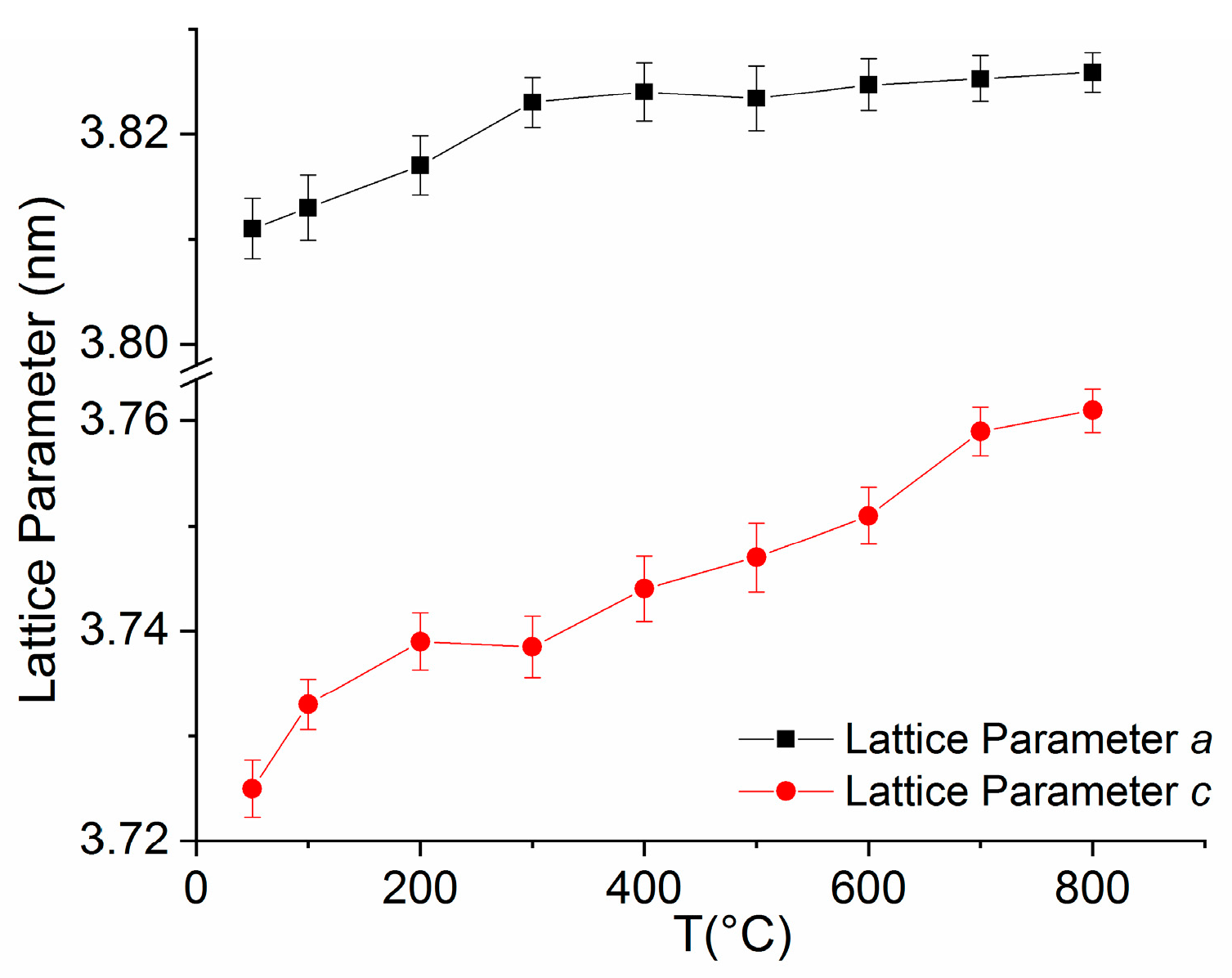 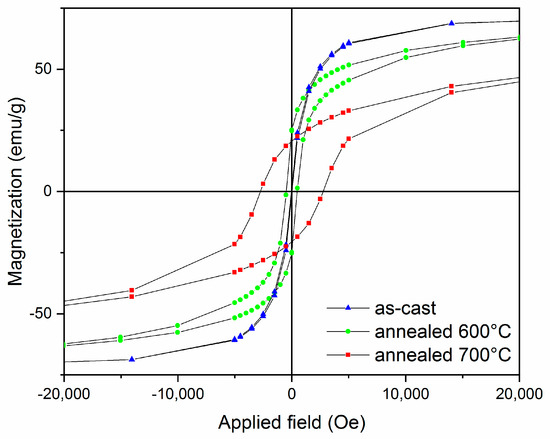 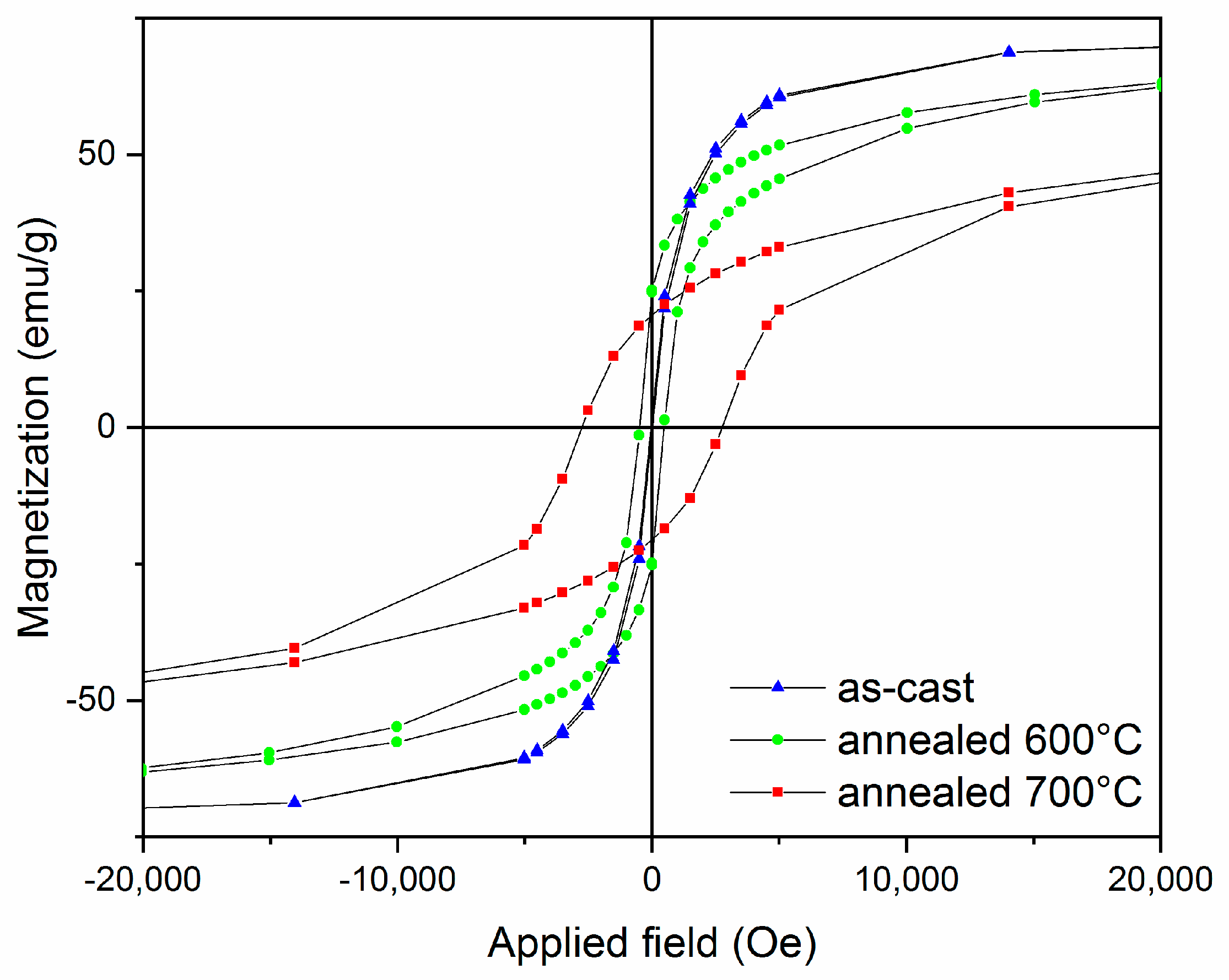