Impact of Endocytosis and Lysosomal Acidification on the Toxicity of Copper Oxide Nano- and Microsized Particles: Uptake and Gene Expression Related to Oxidative Stress and the DNA Damage Response
Previous Article in Journal

Surface functionalization is a key factor for determining the performance of nanomaterials in a range of applications and their fate when released to the environment. Nevertheless, it is still relatively rare that surface groups or coatings are quantified using methods that have been carefully optimized and validated with a multi-method approach. We have quantified the surface groups on a set of commercial ZnO nanoparticles modified with three different reagents ((3-aminopropyl)-triethoxysilane, caprylsilane and stearic acid). This study used thermogravimetric analysis (TGA) with Fourier transform infrared spectroscopy (FT-IR) of evolved gases and quantitative solution 1H nuclear magnetic resonance (NMR) for quantification purposes with 13C-solid state NMR and X-ray photoelectron spectroscopy to confirm assignments. Unmodified materials from the same suppliers were examined to assess possible impurities and corrections. The results demonstrate that there are significant mass losses from the unmodified samples which are attributed to surface carbonates or residual materials from the synthetic procedure used. The surface modified materials show a characteristic loss of functional group between 300–600 °C as confirmed by analysis of FT-IR spectra and comparison to NMR data obtained after quantitative release/extraction of the functional group from the surface. The agreement between NMR and TGA estimates for surface loading is reasonably good for cases where the functional group accounts for a relatively large fraction of the sample mass (e.g., large groups or high loading). In other cases TGA does not have sufficient sensitivity for quantitative analysis, particularly when contaminants contribute to the TGA mass loss. X-ray photoelectron spectroscopy and solid state NMR for selected samples provide support for the assignment of both the functional groups and some impurities. The level of surface group loading varies significantly with supplier and even for different batches or sizes of nanoparticles from the same supplier. These results highlight the importance of developing reliable methods to detect and quantify surface functional groups and the importance of a multi-method approach. View Full-Text
Keywords: nanoparticles; surface functional group quantification; thermogravimetric analysis; quantitative NMR; X-ray photoelectron spectroscopy nanoparticles; surface functional group quantification; thermogravimetric analysis; quantitative NMR; X-ray photoelectron spectroscopy
►▼ Show Figures 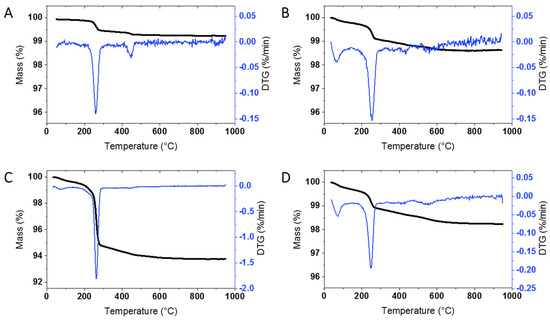